Starting and stopping at the bus stop just west of Deseret Industries, the route takes riders in a loop over a large swath of Washington City, with stops near Costco/Biolife, Walmart, the Pine Valley Townhomes, the Washington City Community Center, The Millcreek/Warm Springs area and more.

An interactive view of the route map can be found here.

To celebrate its inauguration, SunTran services on the newly designated Route 7 Washington Route will be free for the month of June.

Service began at 5:35 a.m. Monday with Washington City mayor Ken Neilson rising early to participate in the occasion that has been years in the making.

“Our good mayor, Kenny Neilson, was here for the 5:30 run,” Washington City Council member Kurt Ivie said, adding that he opted for a later run.

Ivie, who first served on the city council for a year in 2016, said that at least as far back as that year, residents of the city had been expressing their need and desire for a bus route.

But though he feels city leaders have recognized the need for mass transportation from the onset, things didn’t happen immediately.

Washington City Manager Roger Carter said the desire to bring bus services to the city goes back even farther than 2016.

“We’ve been surveying our community for probably 10 to 12 years on transit services, and we’ve watched the interest in transit service grow, particularly in our area that is greatest of need,” Carter said.

Carter identified the downtown area as the primary focus and said the need for transit services, particularly in that area, has been growing since about 2008.

“Probably since 2008 we’ve constantly had residents calling us saying ‘when are we going to have an opportunity to have some transportation?'” Carter said.

But a number of factors, including not getting the local option to pass at first, prevented the city from being able to implement service until now, Carter said.

When Washington County commissioners adopted the 0.25% sales tax in June of 2019 for transportation and transit funding, Washington City Council passed a resolution claiming a portion of the sales tax for its own transit needs, paving the way to allow the city to roll out SunTran service.

“It was just fantastic; we’re very grateful for the county commission for doing that. This has now made this available to the residents downtown,” Carter said.

In addition to the county, Ivie said he was very grateful to the City of St. George for cooperating with Washington City in order to secure the bus.

St. George operates SunTran and will be managing the Washington Route; however, Washington City will cover the cost of the bus and its associated maintenance.

SunTran manager Michael Cardon said the new route was designed in coordination with SunTran and the Washington City public works department and city leaders. Both Cardon and Ivie said the route was designed with the more densely populated and highly trafficked areas of the city in mind, adding that it is important to try to look for areas where the population is better served by having an inexpensive transportation option.

“You need to look out for those that maybe don’t have a car or a means of transportation,” Ivie said, adding that he believes that the service will be beneficial to all residents and will add vitality to Washington City.

Washington City resident Teresa England said she works at the Deseret Industries and there is now a bus stop right by her home, which is going to help both her and her mother with their transportation needs.

Additional Washington City routes, including a route to the Washington Fields area, are being considered for the future, Carter said

While service will be free throughout June, Ivie said they don’t ever want the service to be cost prohibitive for people to use.

“Most of all, we want people to use it,” Ivie said. “We want people to feel like that it’s something that is a benefit, not only to their individual lives, but to our community as a whole.”

Ivie was joined by Neilson, Cardon, Carter and several other current and former community leaders on a mid-morning ride along the route Monday where they greeted and spoke with bus passengers and posed for photos.

An excited Neilson was smiling and could be heard singing lyrics from Paul Simon’s “50 Ways to Leave Your Lover.” 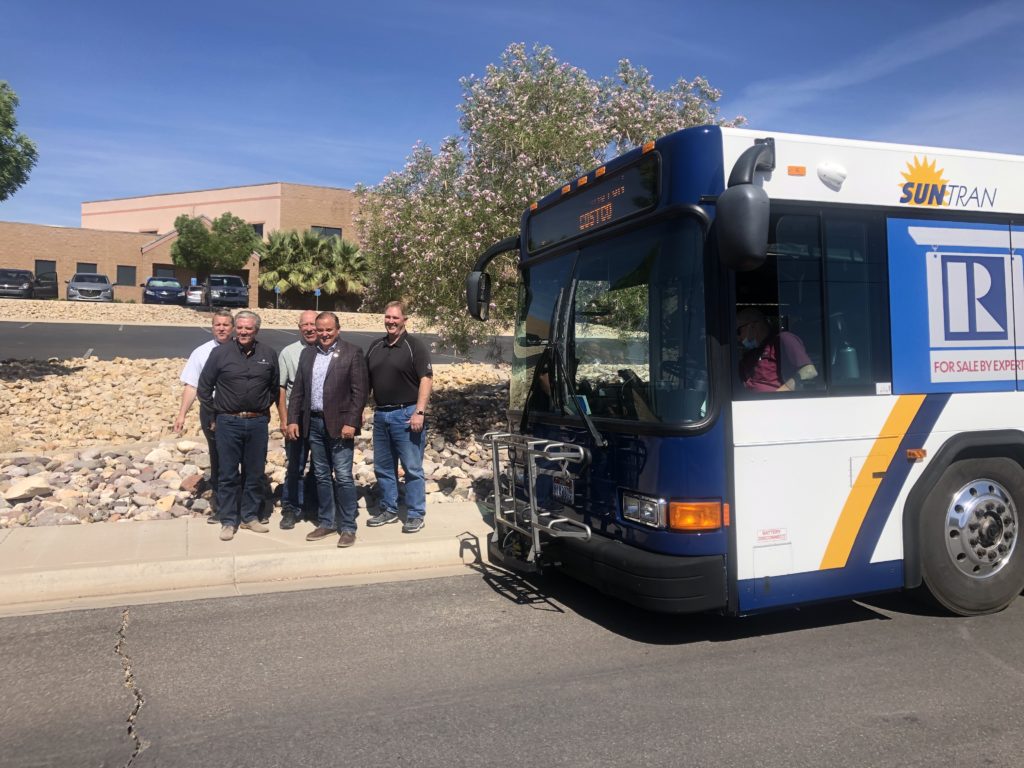 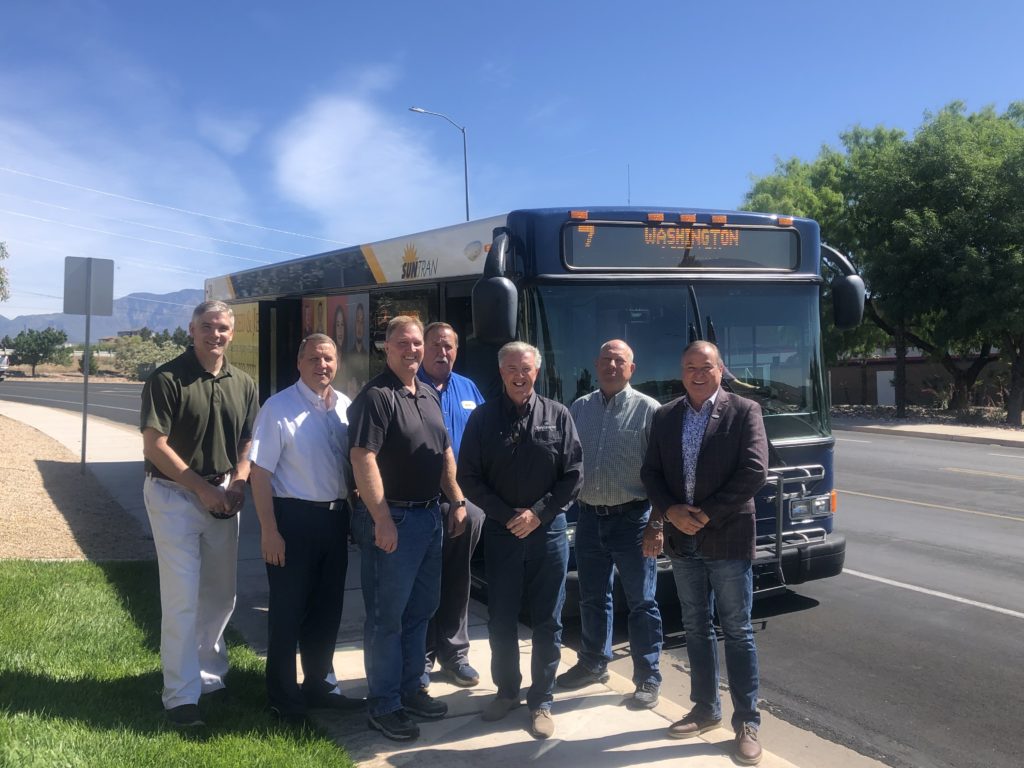 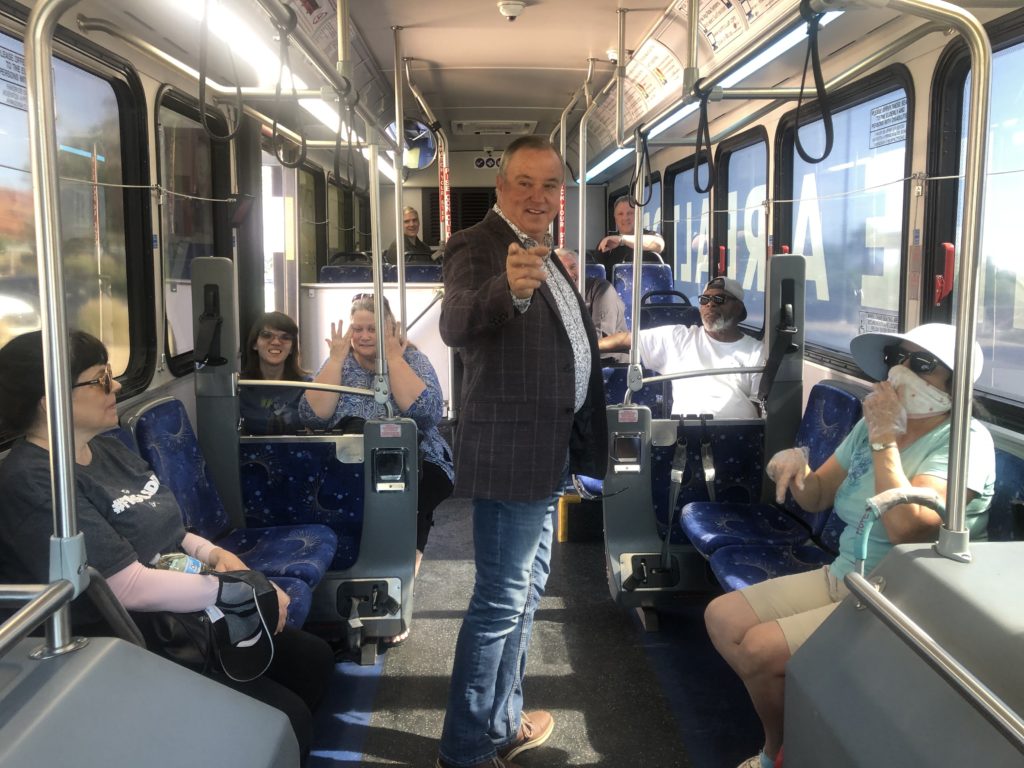 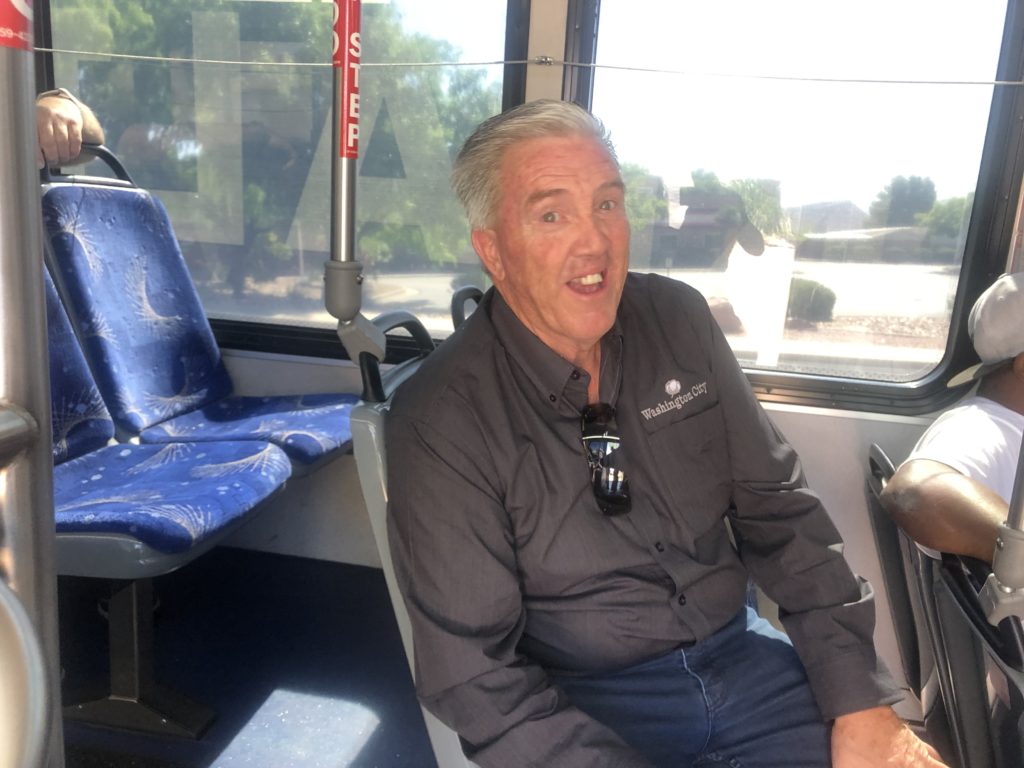 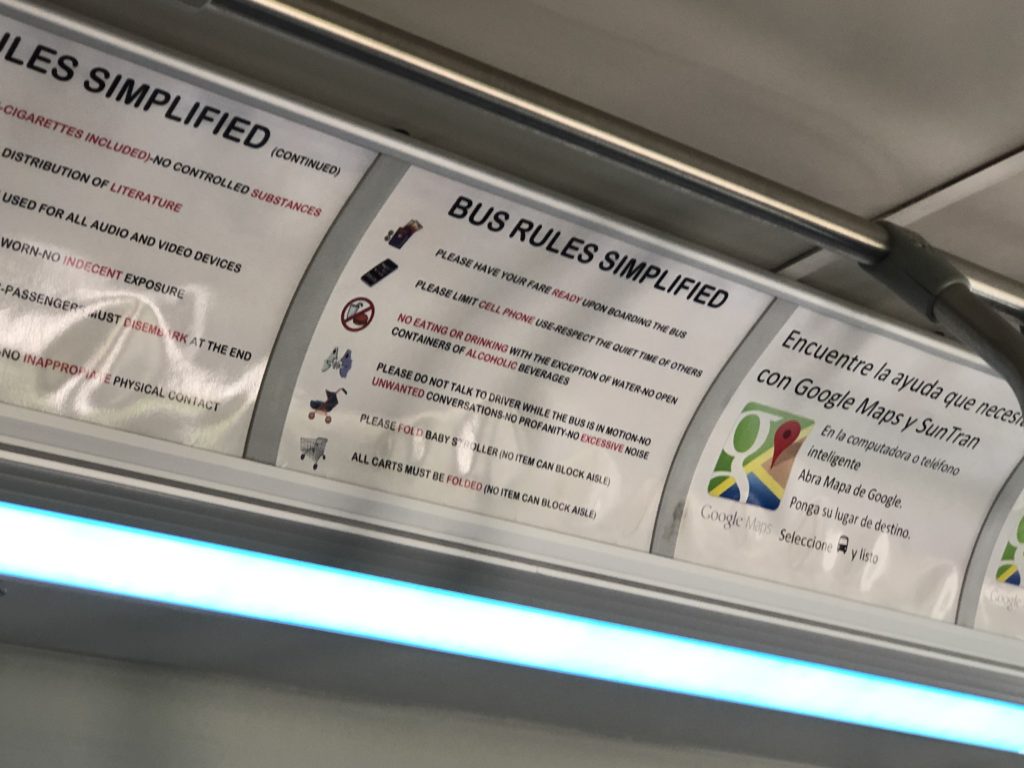 Rules for the SunTran bus are posted on the side walls in English and Spanish, Washington City, Utah, June 1, 2020 | Photo by Hollie Reina, St. George News 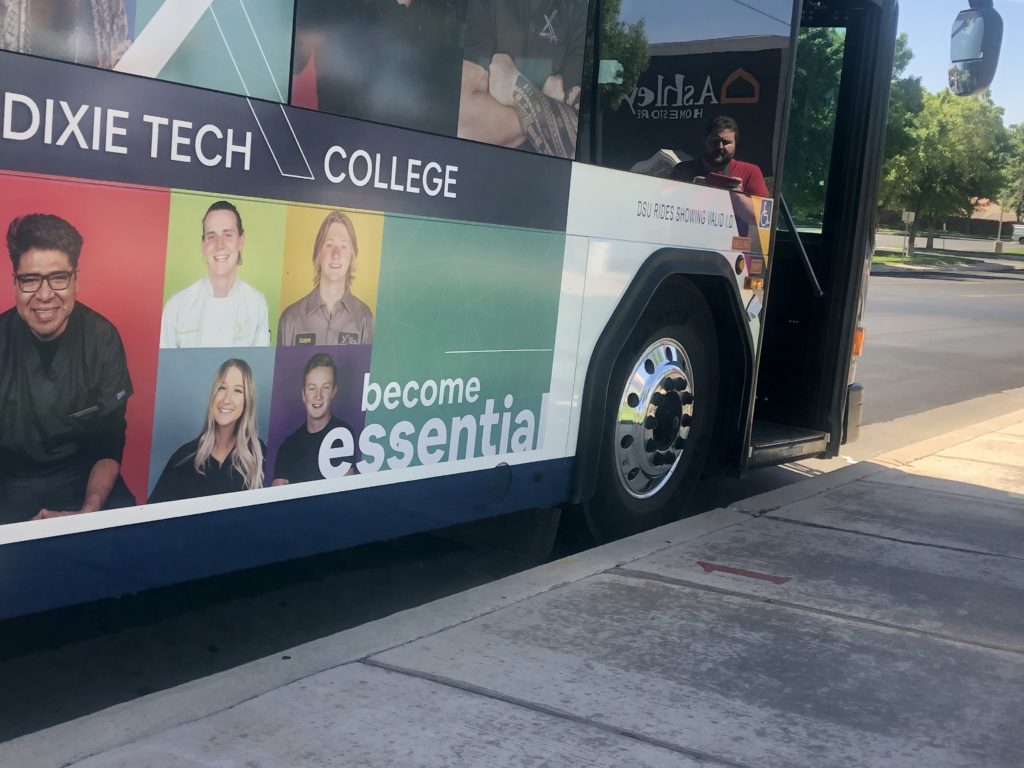 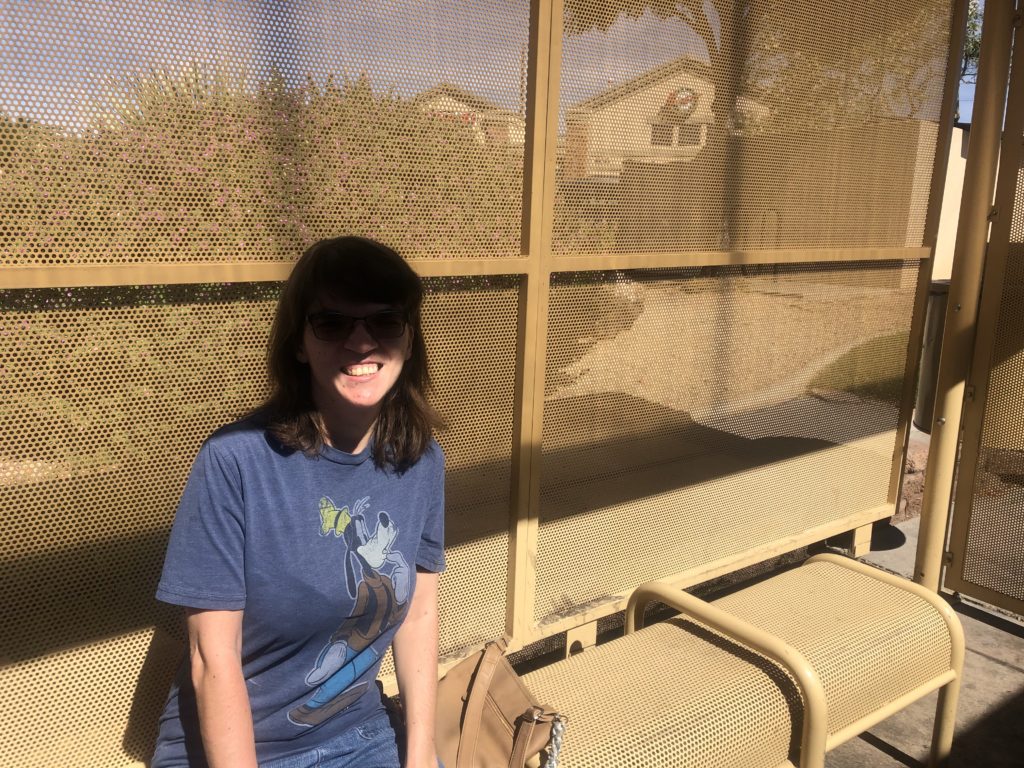 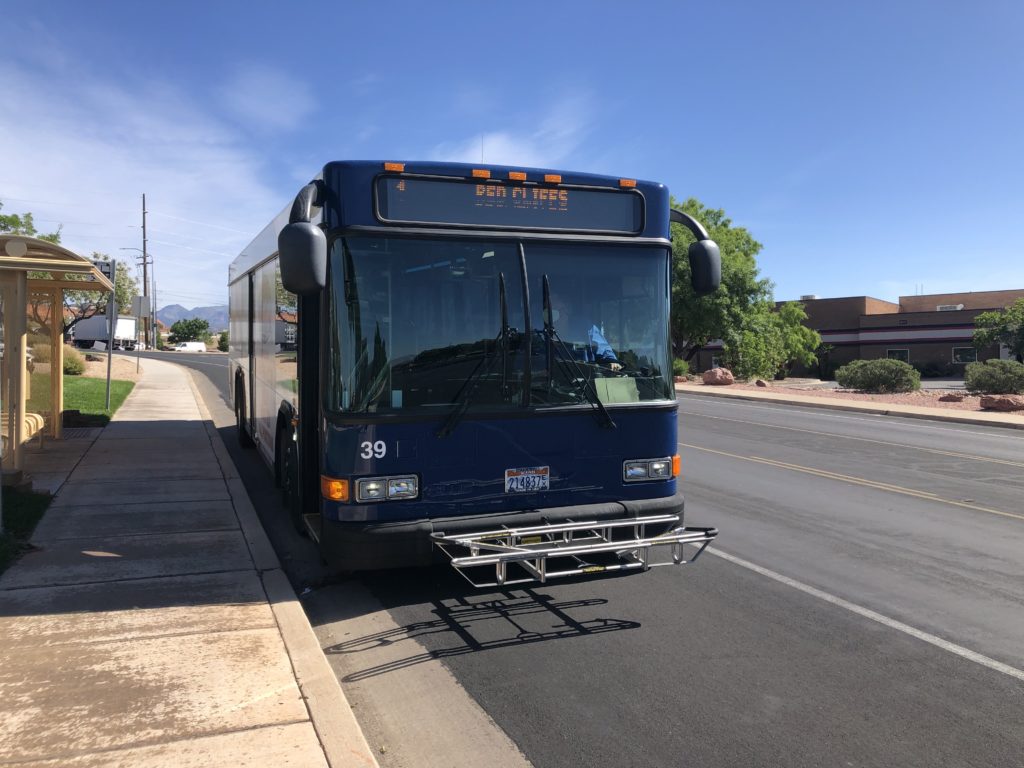 A SunTran bus pulls up to the first stop on the new Route 7 Washington Route just west of the Deseret Industries, St. George, Utah, June 1, 2020 | Photo by Hollie Reina

Though delayed by pandemic, SunTran still set to roll into Washington City

SunTran service to roll into Washington City thanks to 0.25% sales tax