ST. GEORGE — What began as an enjoyable motorcycle ride on Old Highway 91 to visit Gunlock Reservoir ended tragically when a couple was struck by a Mustang driven by a man arrested for DUI. Amid that loss is a sense of gratitude for the strangers who stopped to render life-saving aid.

On the afternoon of May 4, Mary Lu Horkay was riding with her boyfriend, Robert Burnham VII, after the pair rented a motorcycle for the day and left their home in Henderson, Nevada.

They were heading north on Old Highway 91 on their way to Gunlock reservoir when they were struck by a Mustang near mile marker 2, just north of the Arizona/Utah border.

Horkay, sitting directly behind Burnham on the motorcycle, recounted during an interview with St. George News that seconds before the crash, she saw the silver car coming towards them and told Burnham “look out, that car’s coming right at us.”

Just then, she said, Burnham pulled the handlebars sharply to the right to avoid being struck by the Mustang. By then, the car had crossed the median and was heading toward them. The motorcycle veered sharply and went onto the soft shoulder just as the car struck the couple, which is when Horkay “heard a lot of noise. A lot of really loud noises,” she said.

The next thing she remembered was laying on the ground looking up, and knowing that something was very wrong with her left leg. Seconds later, she said, she realized her leg was gone and then noticed other motorists stopping to help them.

A man yelled for a belt to use as a tourniquet to secure around her leg that was bleeding profusely. She told them to take the belt she was wearing, which they did, and someone gave them a second belt that was placed around Burnham’s leg just below the knee, as he was also heavily bleeding from his foot being severed.

The man holding the belt around Horkay’s leg was “amazing,” she said, adding that he spoke to her the entire time – telling her he was a medic in the military and served in Afghanistan. He continued to reassure her that he had seen many serious injuries and amputations, she said, and told her she was going to make it out of the situation alive.

Meanwhile, Beaver Dam Littlefield Fire and Ambulance was first to arrive on the scene, where they found a group of bystanders helping the riders, including “one man who was holding that belt around the woman’s leg with all of his strength,” Fire Chief Jeff Hunt told St. George News.

Hunt went on to say that he and Battalion Chief Andre Ojeda began emergency treatment right away, and when they started treating Horkay, he said, they realized that the bystander was unable to secure the belt with the buckle, which is why he was holding it together with his hands.

“He’d been holding that belt together until we got there,” Hunt said.

Hunt went on to say the amputation that occurred severed Horkay’s femoral artery, so had the bystanders not stopped to help, she “could have very easily, very easily bled out and died before help arrived.”

He said that Burnham lost a significant amount of blood as well when his foot and part of his leg was severed below the knee, which is an area that typically bleeds less and is easier to place a tourniquet on – but was still serious enough to cause death.

“Either way, both of them were so seriously injured that either of them could have been lost out there had no one stopped to assist,” Hunt said.

Washington County Sheriff’s Deputies were also on scene assisting the couple and administering a field sobriety test on the driver of the Mustang as the couple was flown to Dixie Regional Medical Center in two separate helicopters.

Horkay’s next memory was waking up in the ICU and then realizing that Burnham was in the hospital bed next to her, and the only way for either of them to communicate was to give “a thumbs-up sign or some other hand signals,” she said, as both had breathing tubes and were unable to talk to each other.

It was in the ICU that Horkay learned that Burnham suffered multiple fractures on the left side of his body – including every rib, which also caused serious internal injuries. Over the last three weeks, she said, he has undergone 10 surgeries to repair the damage and to remove the infection in his severed leg.

“There’s hardly a place on the left side of his body that isn’t broken, bruised, stitched or bandaged,” she said.

Her leg was severed less than seven inches below her hip, which she found out when a technician measured her for a prosthetic leg on Tuesday, she said. She is also in physical therapy daily, “which is excruciating” she said, in that her right leg is being trained to function in a way that was foreign up to this point.

Her focus right now, she said, is to think positively and take each day as it comes, adding that the support from her family and friends has helped tremendously with helping her to cope with the aftermath.

As for Burnham, she said, “he’s hanging on” and she is looking forward to when the pair can be near each other again. The infection in Burnham’s leg has taken time and additional surgeries to remove, which means he is being treated and staying in a different area of the hospital than she is. He is expected to return to his patient room by the end of the week.

Horkay’s children – Kyle Mills, Kari Weinberg and Holly Zoerner – have set up a GoFundMe account to raise money for their escalating medical costs.

As for the hospital, Horkay said the staff at Dixie Regional Medical Center are “angels and heroes here,” adding that the care the couple has received is “above and beyond” anything they had ever experienced.

“We’ve been so well-cared for it’s unbelievable,” she added.

Horkay said she didn’t learn that the driver was arrested for DUI until she was in the hospital. She said she has three grown children and a grandchild, and it was painful to think that her children could have lost their mother in the collision, and that she would never see them again.  She then wondered, “what if that was his mom that he hit, or one of his family members — how would he feel.”

Even now, it is still painful to be away from her family, as her children live in Texas, and they “are ready to jump on the next plane here,” she said. But due to coronavirus restrictions, in-room visits are not allowed. So any reunion with her children and family will have to wait.

In the end, Horkay remembers those who stopped to help. “There was not one person who didn’t stop to help when we were lying there,” she said, adding that they remained at the scene that day to reassure them both that help was on the way, asking if they could hear the sound of the helicopters approaching in the distance, and so on.

Horkay’s youngest daughter, Zoerner, wrote of the bystanders who stopped on Old Highway 91 that day in the GoFundMe account summary.

“These angels had the strength, knowledge and training to provide urgently needed medical aid,” Zoerner wrote. “They literally saved their lives, using belts as tourniquets. Our families are forever grateful for their heroic actions.”

Horkay couldn’t agree more, saying, “I was so grateful for those people were there — otherwise we would have been laying there with nobody, totally alone.” 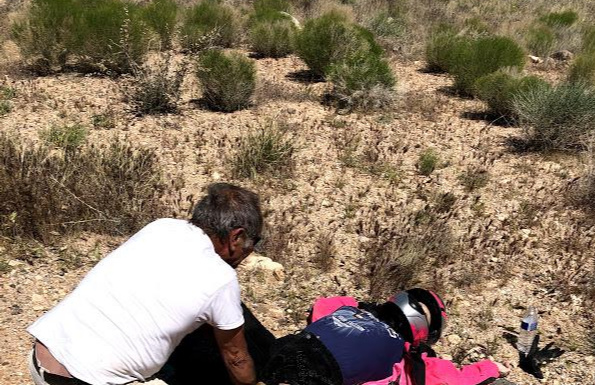 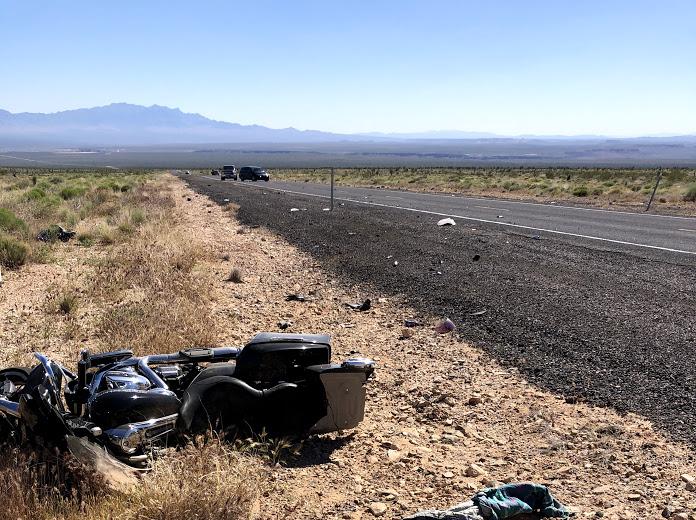 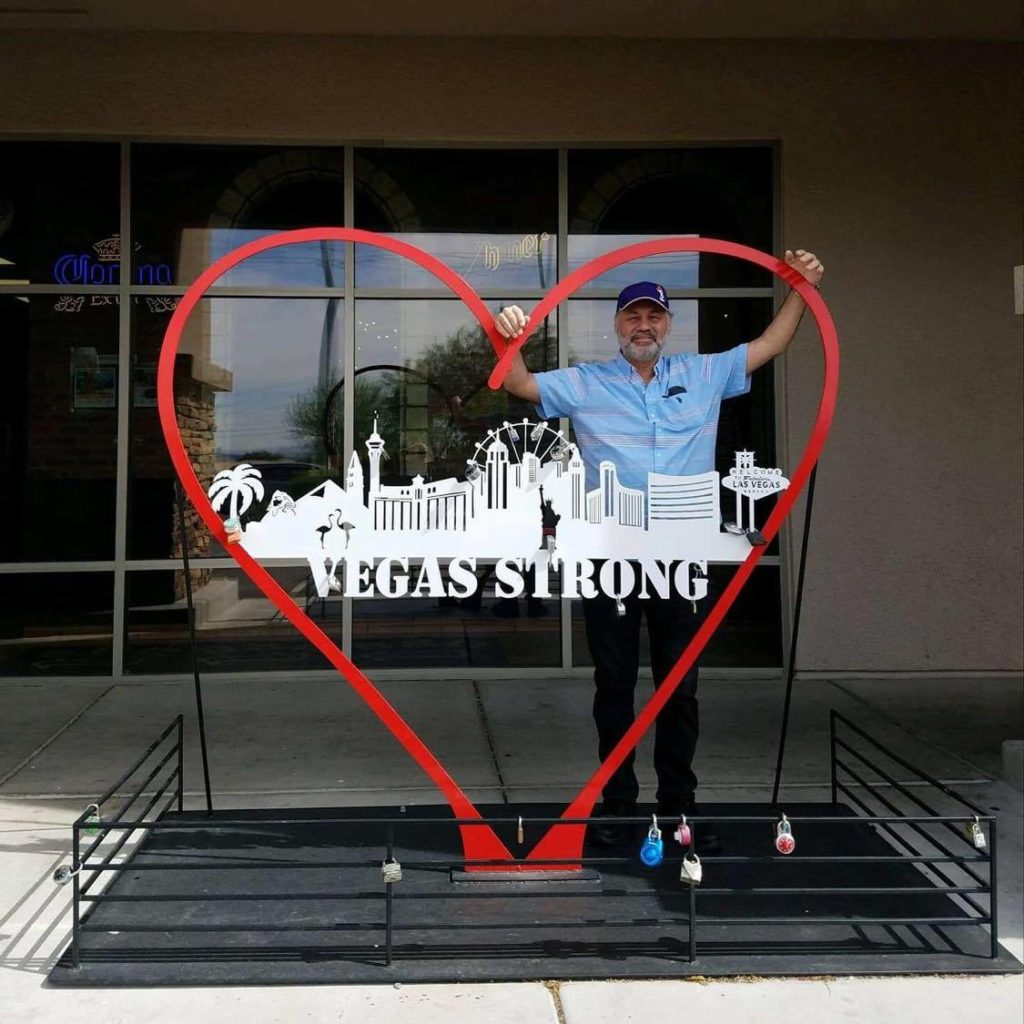 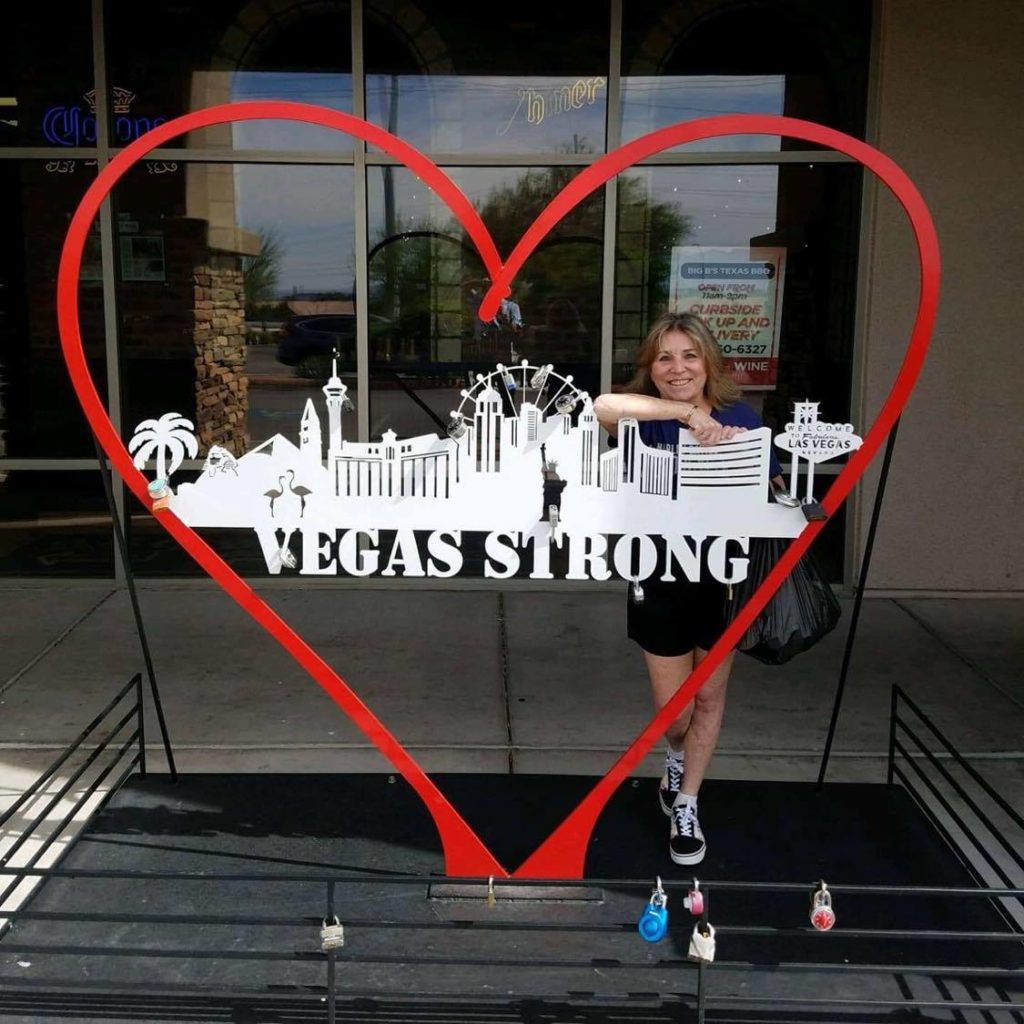 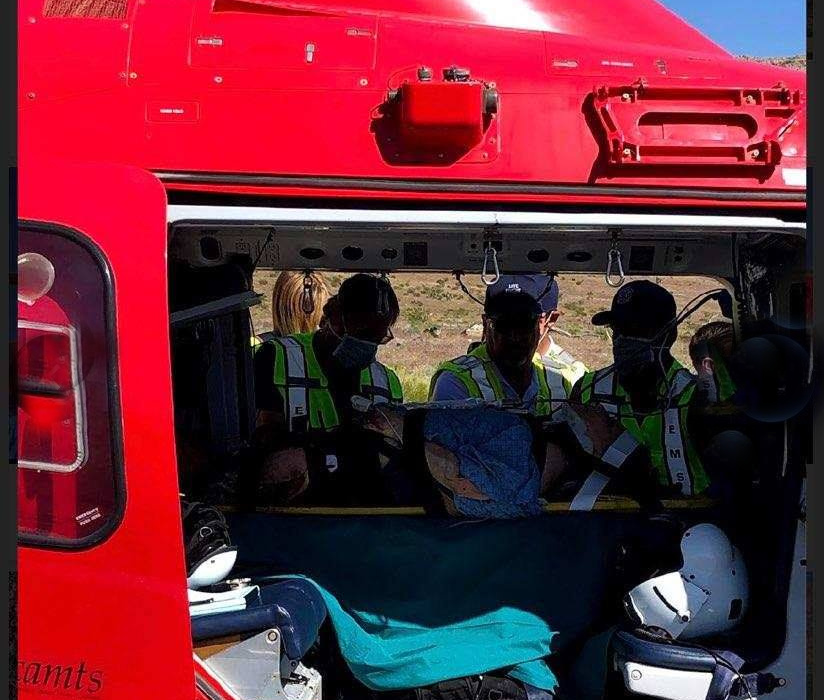 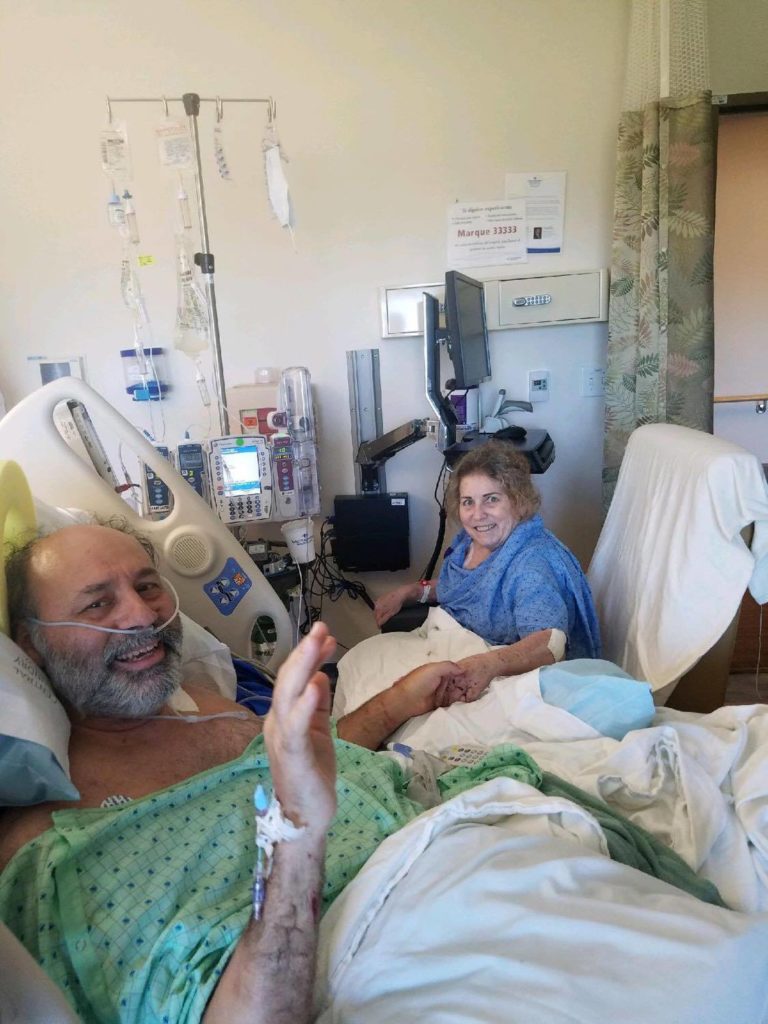 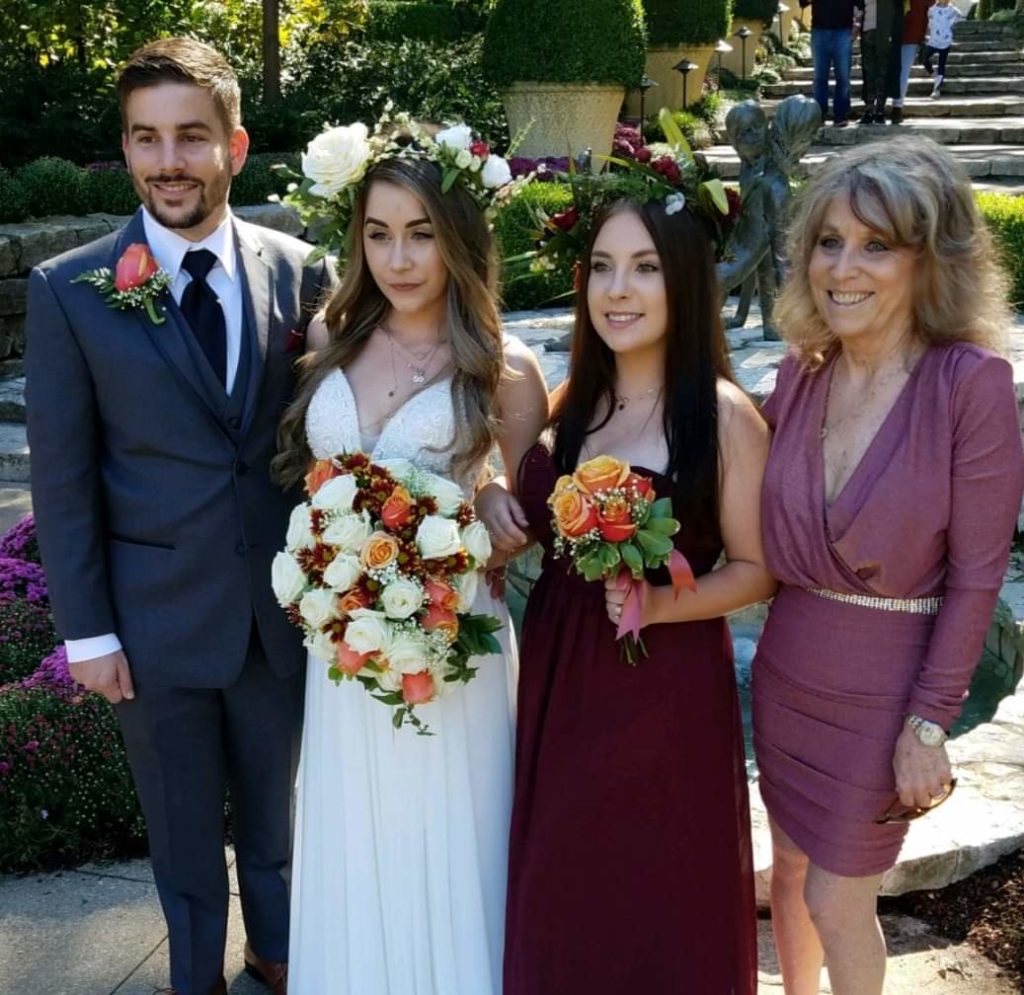 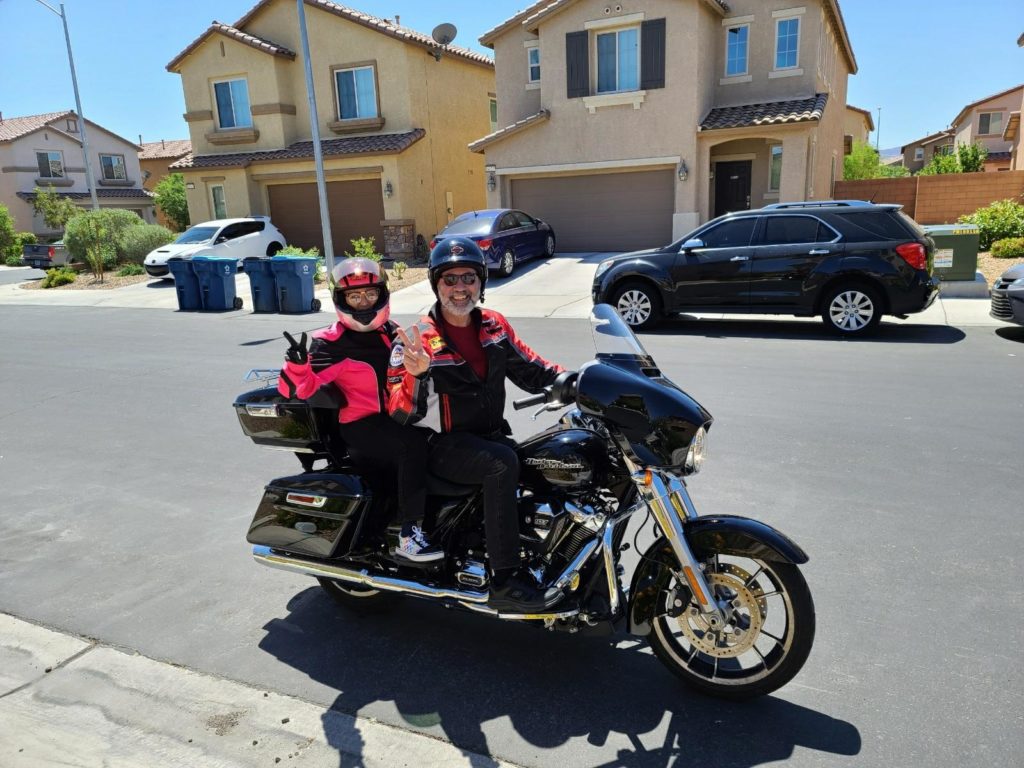 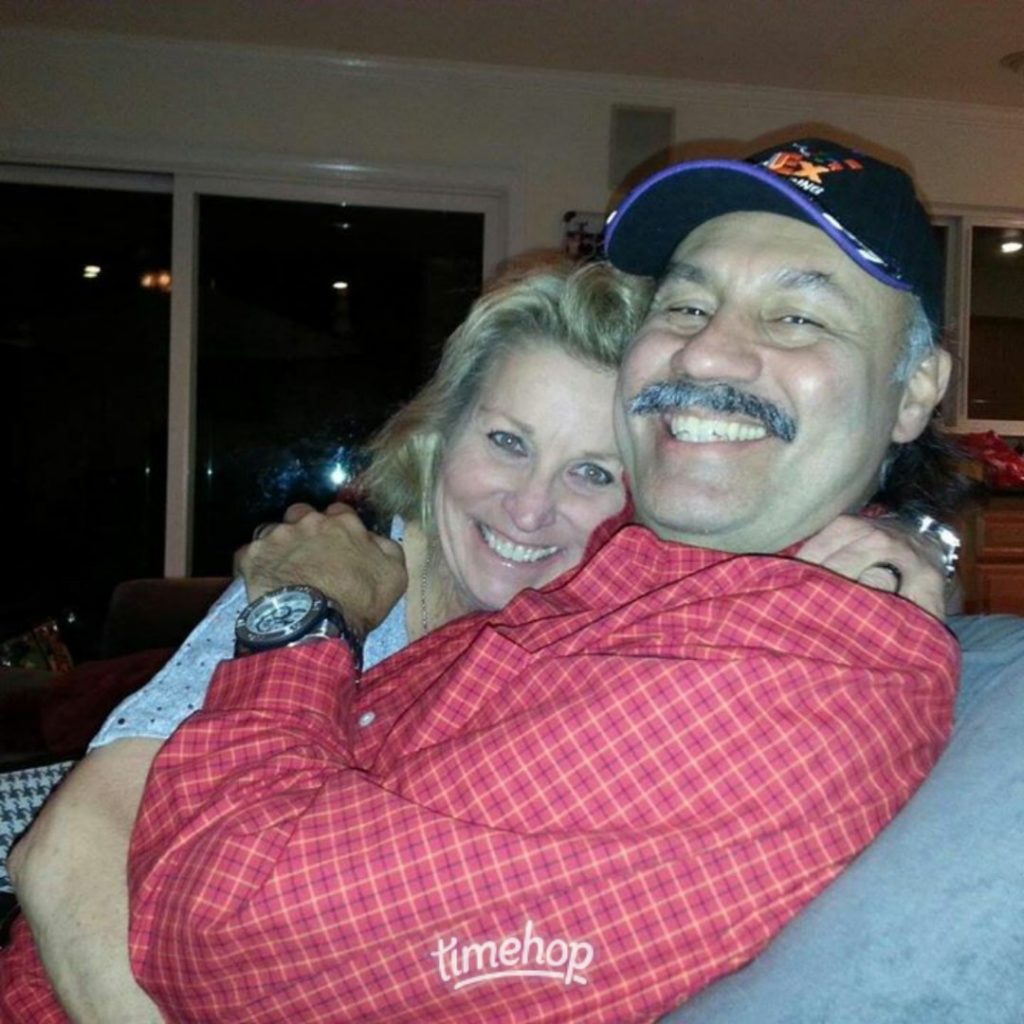 L-R: Mary Lu Horkay and Robert Burnham VII at their home in Henderson, Nev., before the accident on May 4, 2020 | Photo courtesy of Mary Lu Horkay, St. George News