ST. GEORGE — A possible medical condition led to a rollover on Bluff Street that took out several vehicles parked at a car lot Sunday night, an auto business that is no stranger to crashes and unusual incidents that have played out over the years.

Shortly after 8 p.m., officers and emergency personnel were dispatched to Bluff Street near the corner of 400 South on a rollover involving a blue 1983 Chevrolet pickup truck that struck several vehicles parked in the lot of Approved Auto Sales.

Officers arrived to find a path of destruction that continued for several yards. They observed the blue pickup sitting on its side and wedged in between a red Chevrolet pickup truck, a black Chevrolet Equinox and a white Ford SUV.

At the front of the path was a black Cadillac SUV that sustained extensive frontal damage when the blue pickup clipped the front end as it catapulted into the car lot.

They also noticed that a small tree had been struck with an impact that partially lifted it from the ground, nearly knocking it over.

The driver sustained minor injuries in the crash and was examined by paramedics at the scene, but he told police he would seek treatment at the emergency room at Dixie Regional Medical Center on his own, St. George Police Sgt. Albert Gilman said.

At the time of the crash, the blue pickup was heading south on Bluff Street when, for reasons unknown, the truck veered sharply to the left and crossed over the median into oncoming traffic. It then continued over the sidewalk where it struck a small tree.

The pickup then went airborne and clipped a black SUV before hitting two more vehicles that were spun around just as the Ford landed in between the Chevrolet pickup truck and the black Equinox. The impact spun the white SUV around before it came to a stop wedged within the wreckage.

“All we know right now is that a witness said the pickup was traveling in the right lane when it swerved drastically to the left and crossed over into traffic,” Gilman said.

He added that the truck continued across the sidewalk, struck the tree and hit several vehicles in the Approved Auto lot.

The driver was able to climb out of the pickup on his own, and once paramedics arrived, they evaluated the man and remained with him at the scene for nearly an hour as officers obtained witness statements while responders worked to clear debris that was strewn across the lot.

The driver told officers that he blacked out, but did not show any signs of impairment from drugs or alcohol, Gilman said. Officers will be following up with him once he receives medical care, adding that the man also told police at the scene that he suffered from a medical condition.

Gilman went through the path the pickup took on its journey into the parking lot, which began just north of where the fire truck was stopped, as evidenced by the skid marks on the sidewalk leading up to where the small tree was located.

It was difficult to determine exactly how the pickup ended up where it did, wedged in between the two other vehicles — “and we may never know that one,” Gilman said.

The owner of the car lot also responded and began the task of moving the vehicles away from the pickup that was still sitting on its side before arranging for all four vehicles to be towed to Red Rock Automotive as he surveyed the destruction scattered across the south end of the lot.

Within several minutes, multiple tow trucks responded to remove the vehicles and clear the mangled metal from the scene.

The owner said the lot has had multiple incidents, some stranger than others, over the years, mentioning the large light pole that was taken out a few years ago as an example.

Cody Jackman and Mindy Harris were staying at the Inn on the Cliff, a motel located across from where the St. George Airport was previously situated, giving them a birds-eye view of the events as they unfolded from the balcony of their room.

Jackman told St. George News that he and Harris were sitting on the balcony and were talking about a crash reported earlier that day when out of the corner of his eye he could see the pickup truck careen sharply to the left and leave the roadway as it went airborne, he said, which is when he turned to see the truck strike the tree and then crash into the lot.

“It all happened so fast — but that was crazy,” Jackman said, adding that he called 911 seconds after he saw the pickup land sideways.

Harris said it was strange that she and Jackman were “just talking about another crash when this one happened out of nowhere.”

The couple also outlined the violence of the rollover, and the fact that so many vehicles were involved by the time it was all over.

Gilman said the crash is still under investigation, adding that the driver will likely be cited for a lane violation once officers are able to followup with him. 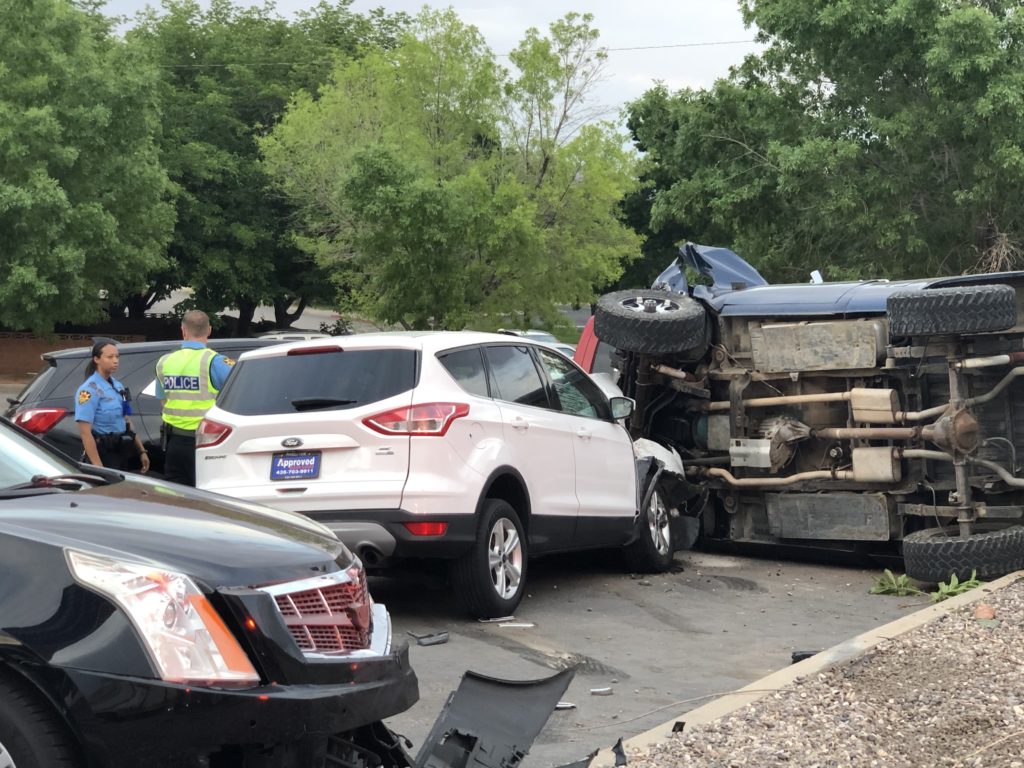 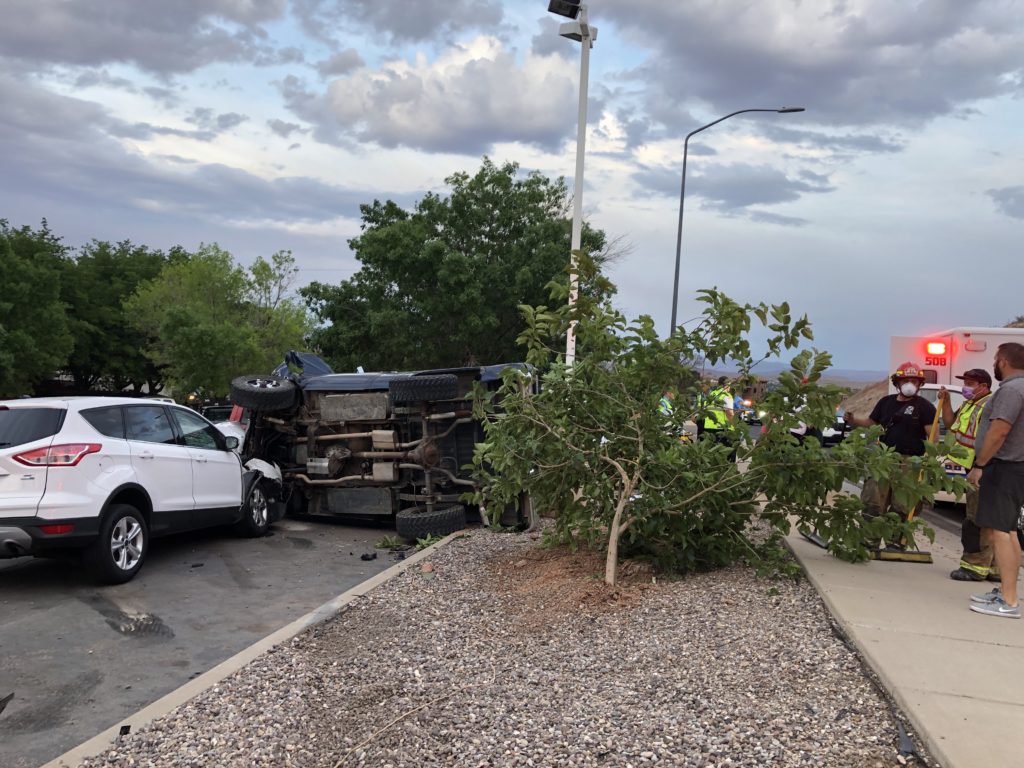 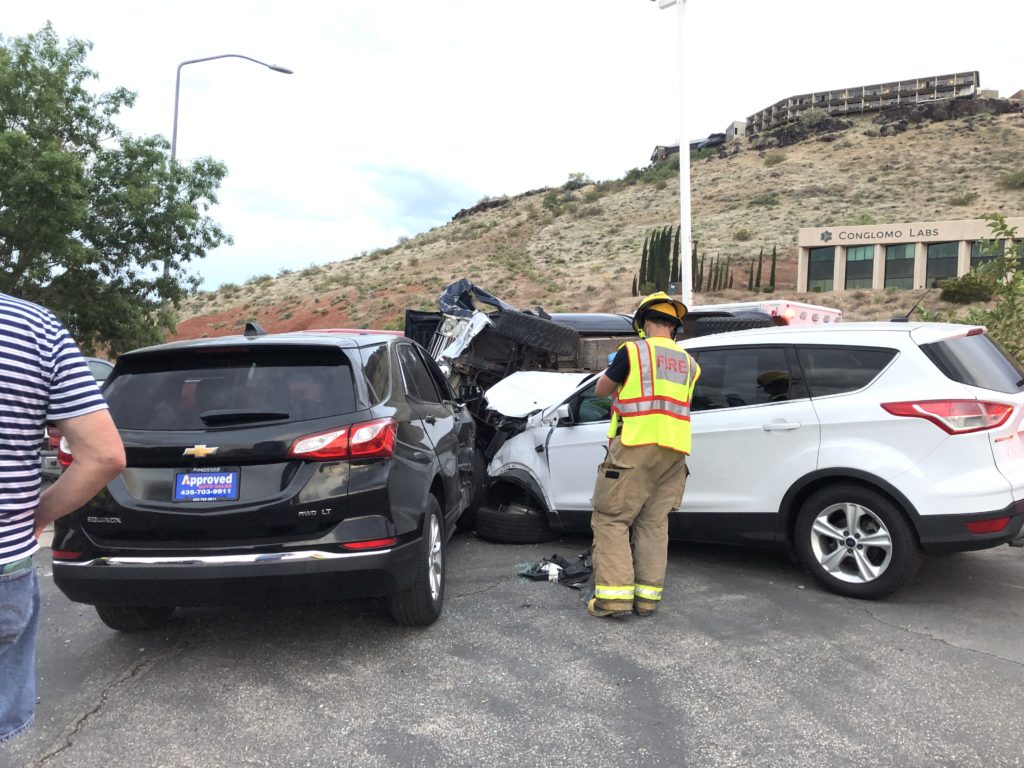 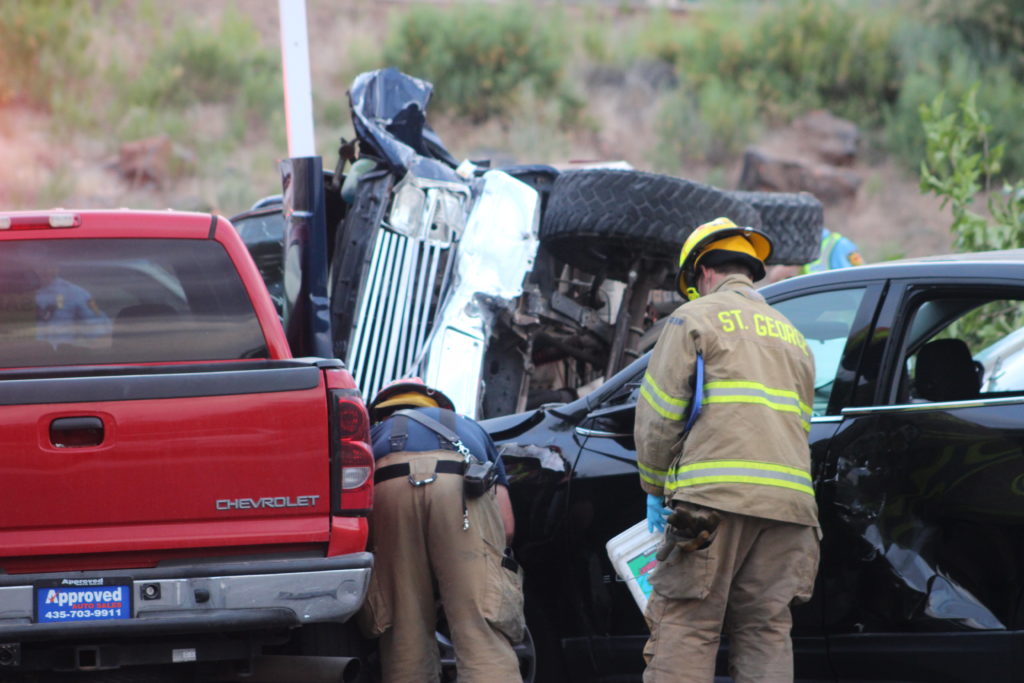 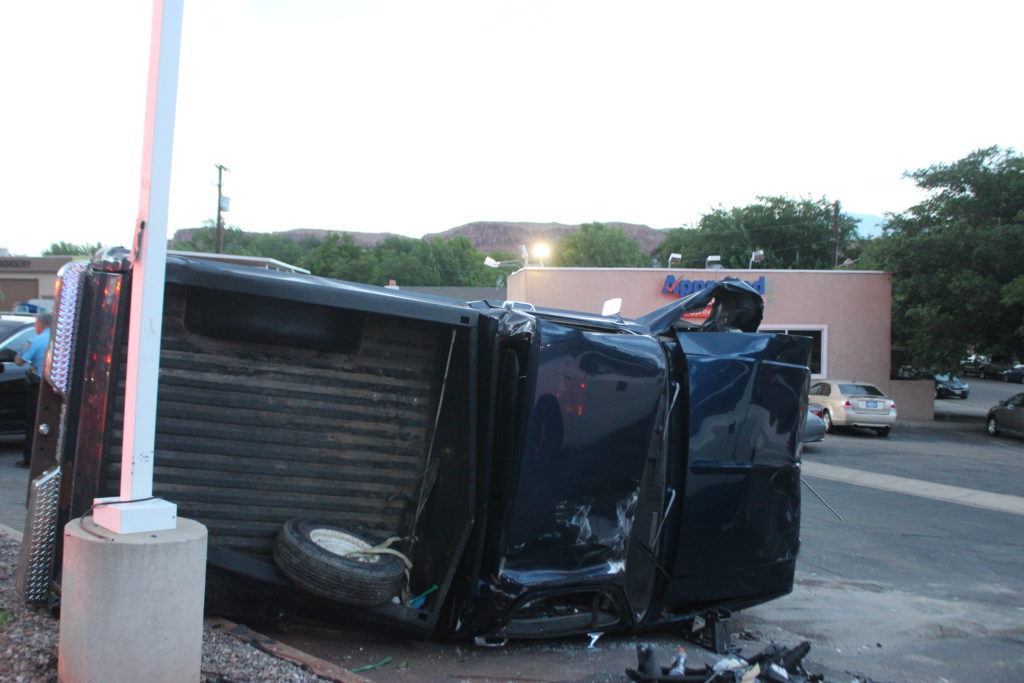 Chevrolet pickup truck lands on its side in a rollover on Bluff Street, St. George, Utah, May 10, 2020 | Photo by Cody Blowers, St. George News 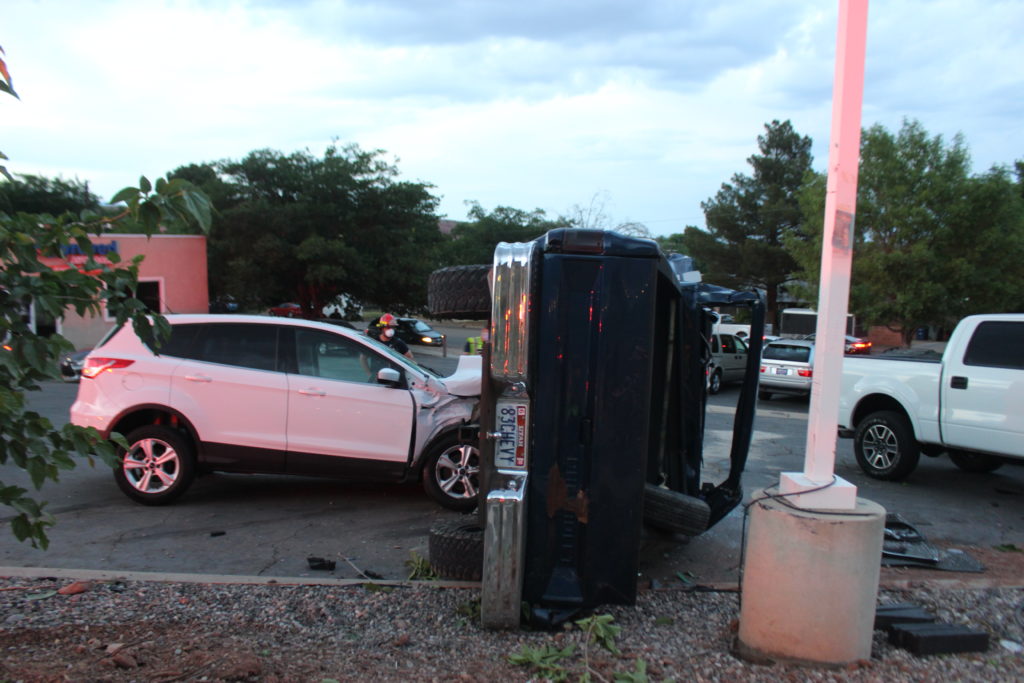 Chevrolet pickup truck lands on its side after striking four other vehicles during rollover on Bluff Street, St. George, Utah, May 10, 2020 | Photo by Cody Blowers, St. George News