ST. GEORGE — Thanks to the efforts of a retired sheriff’s deputy and a police officer, a 13-year-old who was pulled from a pool unconscious and not breathing was resuscitated and transported to the hospital in stable condition Friday.

Shortly before 5 p.m., 911 received a call reporting that a juvenile was pulled from the bottom of a swimming pool at a residence in the Santa Clara Heights area and was reportedly not breathing, Santa Clara-Ivins Police Sgt. Reed Briggs told St. George News.

Emergency personnel were dispatched while a newly-retired Washington County Sheriff’s deputy, and neighbor to the family, ran next-door after hearing a commotion and cries for help coming from the pool area of the yard.

The deputy arrived to find the boy lying unresponsive near the pool. He quickly realized what had happened and immediately started CPR on the youth, who was estimated to be submerged underwater for less than two minutes, Briggs said.

Meanwhile, Santa Clara-Ivins Police Sgt. Nick Hallman, who is cross-trained and a certified EMT, was first to arrive on scene after the call to 911. Equipped with a portable suction unit, Hallman joined in the effort to restore the youth’s breathing by removing the water expelled during the resuscitation process.

By the time ambulance crews arrived at the scene, the juvenile was coughing and breathing before being loaded into an ambulance and transported to Dixie Regional Medical Center.

Briggs said both parents were outside near the pool when the incident occurred, while their son, who has special needs, was diving for rings underwater. And at some point, the boy “just didn’t come back up.”

As soon as the father noticed his son failed to resurface, he jumped in and found him near the bottom of the pool and pulled him from the water. However, by then, the boy had taken water into his lungs and stopped breathing and emergency dispatch was called.

A language barrier added to the confusion as the commotion in the backyard intensified, which captured the attention of the retired deputy who could tell something was very wrong and ran over to help.

The ambulance arrived within minutes and transported the youth “conscious and in stable condition to the hospital,” Santa Clara-Ivins Fire Chief Randy Hancey said.

Hancey added the efforts of both the deputy and the officer made all of the difference in this case, since every minute could have meant the difference between life and death.

Knowing how quickly and quietly a drowning can occur can reduce the risk of suffering a catastrophic loss later, he said, adding that drowning causes respiratory arrest when the lungs fill with water. And without a life-saving intervention, cardiac arrest soon follows.

Risk of drowning for children increases with rising temperatures

With temperatures warming up, there are also more outdoor and water activities, which increases the risk of drowning, particularly for children. It doesn’t take a lot of water to cause drowning.

Additionally, particularly for smaller children, the risk of drowning increases just by the fact that young children are top-heavy, with a larger head and heavier upper body that can cause them to “topple head-first into the water,” Hancey said.

In addition, they have underdeveloped muscles in their legs that aren’t sufficient to pull the upper body and over-sized head back to an upright position, so basic physiology can make them go under and sink very quickly.

Hancey also said children should never be left near or in the water without adult supervision, and cautioned parents “not to turn their backs even for a minute,” as a child can slip underwater very quickly “without making a sound,” he said.

According to the Utah Safety Council, despite a 40% decline since 1987, drowning is still the second leading cause of unintentional injury-related death for children under 10 years old, taking the lives of more than 900 children each year across the country. (see Ed. note)

Moreover, for every child who drowns, four more are hospitalized for near-drowning, and just as many children are treated in hospital emergency rooms statewide each year.

Identifying the signs of a drowning child is important: 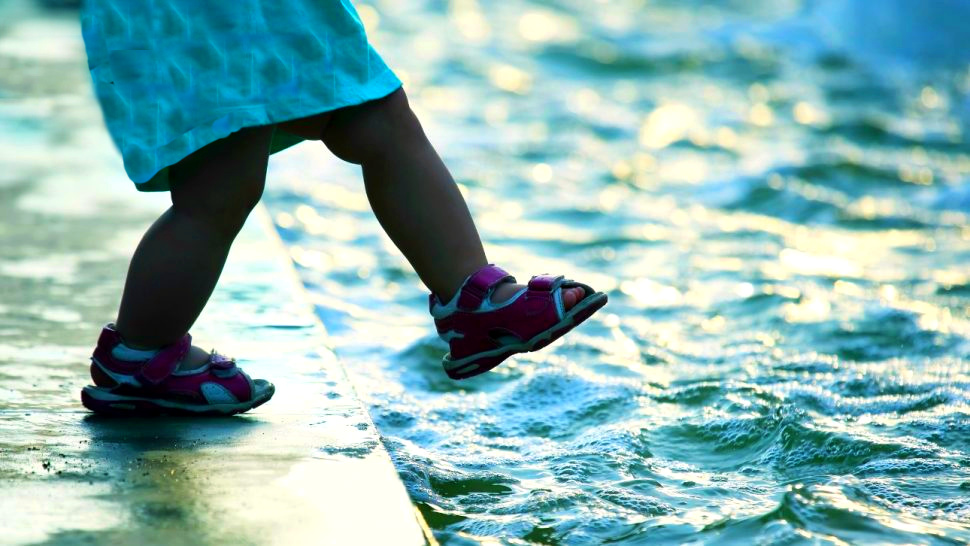 After Friday’s incident in Santa Clara, the juvenile was treated at the hospital and released that same afternoon, Hancey said, adding that he is expected to make a full recovery.

Ed. note: An earlier version of this story misstated the numbers of drowning fatalities.