ST. GEORGE —A two-vehicle crash on St. George Boulevard just north of KFC sent one driver to the hospital and left two vehicles significantly damaged as heavy traffic was diverted around the scene Friday afternoon.

Shortly after 1 p.m., officers and emergency personnel, many donning face masks, were dispatched to a two-vehicle crash on St. George Boulevard at the corner of 900 East involving a white Cadillac sedan and a silver Toyota Avalon.

Officers arrived to find both cars heavily damaged and partially blocking both directions of travel.

The driver of the Toyota sustained minor injuries and was transported to Dixie Regional Medical Center to be treated for “bumps and bruises,” St. George Police Sgt. Spencer Holmes told St. George News.

The passenger in the Toyota, as well as the man driving the Cadillac, reported they were uninjured in the collision, while a battalion of officers responded to the area to divert traffic away from the crash as responders tended to the chaotic scene.

At the time of the crash, the Cadillac was heading east on St. George Boulevard and the driver came to a stop waiting for traffic to clear before heading north on 900 East.

For an unknown reason, Holmes said, the Cadillac pulled out and crossed over into oncoming traffic where it was struck by the Toyota heading west on the same street.

The passenger’s side of the Toyota sustained the brunt of the impact, he said, which deployed the airbags and caused significant damage to the vehicle. The Cadillac sustained heavy front-end damage and both cars were subsequently towed from the roadway.

The man driving the Cadillac was later cited for failing to yield after a stop, while the passenger in the Toyota was driven to the hospital to be with his wife. 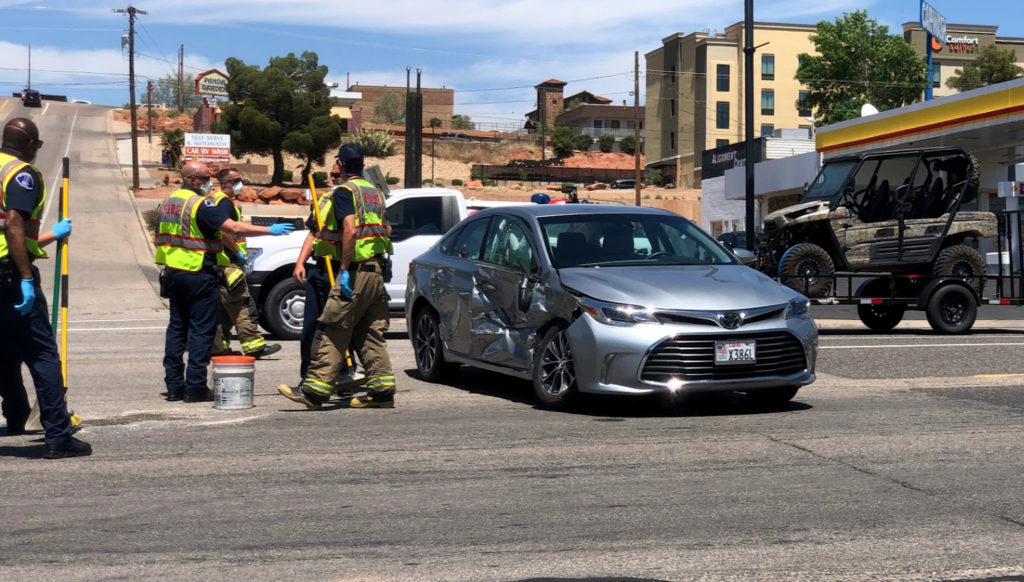