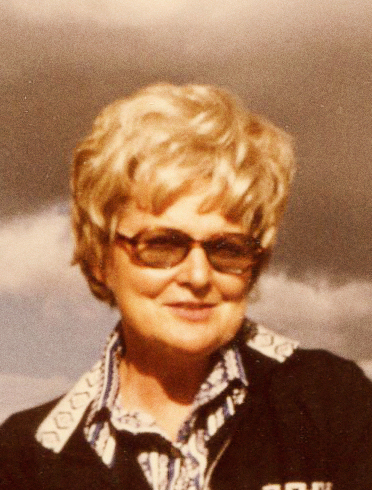 Faye was born on May 10, 1926, to Thelma Huntington Barton and Kenneth Asa Barton in Beaver Utah. She was named after her mother, Thelma, but throughout her life was known as “Faye.” She married her eternal companion, Keith Larsen Henrie, on March 1, 1946, in Logan Utah after a whirlwind courtship while they were students at Utah State University, Logan Utah. Their marriage was later solemnized in the Manti Utah Temple. This year they celebrated their 74th wedding anniversary.

Faye was raised in Beaver, Utah where she enjoyed her life surrounded by a loving family. She attended Belnap Elementary School and graduated from Beaver High School in 1944, where she was the first female student body president.

From an early age, she enjoyed music and was blessed with a beautiful singing voice. Some of Faye’s fondest memories were of the family gathering around the piano at night and singing together. Faye (age five) started singing and performed duets with her sister, Jane (age three) at many events and church gatherings. As Faye entered her high school years, she performed in numerous musicals. One of her favorite performances was taking the lead in “Malinka of Astrakhan.” After graduating from High School, Faye attended Utah State University but soon realized that she wanted to advance her career in music. She was accepted into the Boston Conservatory of Music where she focused in vocal training.

After Faye and Keith married in 1946, it was just the beginning of an adventurous life together. Faye’s father, Ken Barton, was in the process of moving his cattle operation from Beaver to Cherry Creek, Nevada and asked if they would like to become a part of it. Their firstborn, Dale, arrived during this time at the ranch and their second son, Kim, arrived four years later. Life on the ranch was strenuous, which included cooking meals three times a day on a wood stove, washing hired men’s clothing with a gas engine primitive washer with the added bonus of outside toilet facilities. Soon Keith added electricity and an indoor bathroom to the home. After four years on the ranch, they decided to shift gears and move their family to California to pursue a career in Aeronautical Engineering.

While in Pasadena, their son Dale contracted polio and Faye devoted all of her time and energy to his recovery. After completing their schooling there, they made their next home in Granada Hills, California where their first daughter, Melissa, was born. They made their next home in Orange County California where Keith continued his career in the aerospace industry and their second daughter, Shawna, was born.

Faye dedicated her life to creating a beautiful home with artistic flair for her family, was interested in gardening and plants, and had a special love for all kinds of birds. She loved watching them as they fed from her multiple feeders. She loved the arts, eclectic style, always set a beautiful table and was quick to smile and always cared about others before herself.

She supported her husband in his career and church assignments and loved being a homemaker and caring for her children. Throughout the years in California, Faye was involved in music whether it was leading, conducting choirs or singing in church and many other musical productions. Faye sang solos in church services, Christmas programs and funerals throughout her adult years. It gave her much joy to serve and share her musical gifts. Faye and Keith served a mission at the Family History Center in Salt Lake City, Utah for The Church of Jesus Christ of Latter-day Saints. After finishing their mission, they made their new home in San Ramon California where they lived for 10 years. Both Faye and Keith enjoyed serving in the Oakland California temple as ordinance workers. Their final homes were in Lehi and Washington, Utah where they spent separate winters and summers.

Faye is survived by her husband, Keith Henrie, her children, Dale (Marty) Henrie, Kim (Linda) Henrie, Melissa (Jack) McIntyre and Shawna Henrie. Faye was blessed in life to be able to love, guide and nurture her 19 grandchildren, 40 great-grandchildren and one great-great-grandchild. We are blessed to know that grandma Faye will help usher in a new great-grandson and a great-great-grandson from the other side of the veil in a few weeks. Faye is survived by her sister, Kaye (Stan) Barton Bailey and her brother Brent (Joyce) Barton. She was preceded in death by her brother, John Barton and sister, Jane Barton Jensen. Faye was also preceded in death by her granddaughter, Jessica Lynne McIntyre and great-granddaughter, Sadie Rose Henrie.

Due to the COVID-19 pandemic, a private family service to honor her will take place at Washington City Cemetery.

Arrangements entrusted to the care of Metcalf Mortuary, (435) 673-4221. Please visit our website at www.metcalfmortuary.com for condolences and complete obituary. Live streaming of the service will be available on our website, Friday, May 1, 2020, at noon.