FEATURE — Today most drivers whizzing by while merging onto Interstate 15 from state Route 17 hardly notice it. Many of those who do probably wonder what it was.

The cement bandstand on the southeast corner of Interstate 15’s Exit 27 (the Toquerville exit) was a hopping place during its heyday.

Many who participated in the dances once held there wished they had a DeLorean with a flux capacitor and could travel back in time like Marty McFly to relive those good times. However, even with all of the nostalgia associated with the location, there is not much written about what went on there.

Before its dancing days, Anderson Junction was a crossroads, just like it still is today. It was also a ranch for a Danish immigrant family, for whom it is named.

Once called Echo Farm then Anderson’s Ranch, Anderson Junction has been a natural stopping place for weary travelers because of its location at the junction of the Toquerville Road, now state Route 17, and the highway through Black Ridge to Cedar City, now Interstate 15.

The Dominguez and Escalante Expedition camped nearby just after they had decided to return to Santa Fe instead of forging onward to Monterey, California, their intended destination. President Warren G. Harding stopped there in the summer of 1923 on his way to Zion National Park. The Crown Prince and Princess of Sweden even passed through that same year when they formally dedicated Zion National Park’s West Rim Trail.

The location’s name is derived from Peter Anderson and his wife, immigrants from Denmark who homesteaded the location in 1884 living in a dugout their first winter. Like most pioneer families, life was difficult for the Andersons.

“During those early pioneer years and while homesteading Anderson’s Ranch, no one can picture the hardships, misery, suffering and loneliness I experienced,” wrote Peter Anderson’s wife, Anna, as reported in a Roots Web profile of the area. “Always my heart yearned to run away … to run away to the ease, comfort and luxury of my home in the old country.”

The Andersons later built a large house and warmly welcomed travelers to their home.

“Theirs was truly a ‘house by the side of the road,’ a haven of rest to passers-by,” Mary Naegle, a granddaughter, recalled. “Grandfather invited people in for good meals, fed their horses, and added a bundle of hay to help them on their way.”

Naegle noted in her recollections that her grandfather invited travelers in for meals, fed their horses, fixed their wagons and would give bundles of hay to help them on their journey.

To irrigate their farmland, the family dug a canal to their ranch. The Roots Web profile called their canal “an engineering genius,” explaining that it gradually descended six miles, where it entered a holding pond. The Anderson Family, much like the later ditch riders on the Hurricane Canal, had to continuously inspect it with a shovel in hand to check for breaks and keep it clear of obstructions.

The Roots Web profile called Anderson’s Ranch: “a rocky barren area which they made highly productive and beautiful by their hard and diligent labor. It was the largest privately-owned orchard in Dixie, and its fruit orchards were long known as the best in southern Utah.”

In the summer, the family “moved to the Pine Valley Mountains where they raised summer gardens, milked cows, and made butter and cheese,” a profile of Peter Anderson on familysearch.org explained. “He had the first telephone in Dixie and installed the first culinary indoor water system in the county in his home. He maintained a private road that was better than the public road.”

One history of Silver Reef suggests that after a wild time at a dance hall, a drunk woman shot the proprietor, who died the next morning. He had a stash of money that could not be found. The building was later converted into a store and when its owner, James Louder (who moved to Beaver after the demise of Silver Reef) sold the structure to Anderson, who started to dismantle it to move it to his ranch.

“When Anderson was removing the mopboard from the south wall, he found a leather sack containing about $2,000 in gold coin,” Roots Web reported. “This he wisely spent, as travelers to the south see as they linger at an oasis in the desert.”

Other reports note that the sum might have been as small as $200, but this find caused another rush of “mining” at Silver Reef. It inspired treasure hunters to search Silver Reef’s ruins for any other perceived stashes of loot that never materialized and helped lead “to the dismemberment of anything wood or stone that could be used elsewhere, and Silver Reef was dispersed across the area,” the Family Search profile explained.

Anderson died on February 15, 1921 from wounds sustained in a wagon accident while on his way back from plowing his fields, just three days short of his 81st birthday.

Veterans organizations built five dance pavilions in Southern Utah in the 1930s or 1940s, one of which was known as Starlite Gardens, according to an information page on the Washington County Historical Society (WCHS) website. Other such dance pavilions constructed included Rainbow Gardens in Cedar City, Cobble Crest in Kanarraville, Purple Haze in Kingston Canyon (Piute County) and Sunset Pavilion in Richfield.

Made of cement, the Starlite Gardens bandstand was shaped parabolically to reflect the sound out onto the dance floor, the WCHS page explained. There was no electronic amplification. All the music played at the dancing venue was acoustic. However, the venue did have lights so that musicians and dancers could see.

The author’s inquiry on social media for information about the bandstand resulted in a flood of memories from those who actually danced there or those whose parents told stories of the good times at the pavilion.

One can imagine that the scene at Starlite Gardens on weekends during the 1930s to 1950s would have looked just like a scene from a movie. George and Lorraine McFly would have felt right at home at the bandstand. And as many related in response to the social media inquiry, sparks could have easily flown while dancing the night away to live music under the stars.

One of the groups that frequently played for the dances at the pavilion on Saturday nights during the 1950s was the Glen Ray Orchestra from Hurricane, which consisted of Glen Webb on the saxophone, Ray Owens on the drums, Lafe Staheli on the trumpet and Irene Hinton Allen on the piano.

Darrell Reynolds related his experience of playing the piano at the dances, which was kept under a locked box. It was out of tune and had broken keys and was not a joy to play. The joy, he said, was watching the dancers have “a blast.”

Several people shared stories of groups of friends from St. George to Cedar City packing cars and trucks with as many people as they could to attend the weekend dances. Many met future spouses at the dances. Some women told stories of going to the dances with a date, but coming back from the dances in the company of another man they liked better, some of whom became their future husbands.

Shannon Tweedie told the story of her father, Wildon Tweedie, who played the clarinet or the saxophone at Starlite Garden dances. Tweedie said her mother, Metta Wood, would go to the dances and dance with other men while her father was playing.

“Dad probably wished he could be down there dancing instead of playing in the band,” she said.

Some married dancers even brought their children along with them and the kids played together while their parents danced.

By all indications, by the early 1960s dances had ceased at the Starlite Pavilion, although the Hurricane High School graduating class of 1963 did hold its senior party there according to class member Nina Isom Kirkland.

Some surmise that the dances may have stopped because of all the alcohol consumed there by underage drinkers. There was a triangular-shaped gas station and bar across the street from the dance venue operated by Rulon Beatty. It eventually burned down. Even with a bar across the street, some dancers brought their own homemade booze. One respondent said the dancing was “enhanced by brown bags.”

There was a rock house across the road north of the Anderson Ranch house that had a bootleg whiskey operation with a tunnel under the road, the WCHS reported.

Another reason some have speculated that led to the demise of the dances at Anderson Junction was that dancing became less popular as time progressed. One respondent jokingly surmised that one reason all the fun ceased was “too much hanky panky.”

Another respondent said there were a few dances held there in the 1980s. However, nothing could compare to the goings-on during the location’s heyday.

Anderson Junction, as the street signs indicate, is within the Toquerville city limits even though it is isolated three miles north of the town’s center.

The old Starlite Gardens bandstand is easily visible as one merges onto northbound I-15 on the Exit 27 on ramp. One can drive the road that runs east from the bandstand to see the land the Anderson family once farmed as well as an old cemetery and petroglyphs.

One can only wish that someday, another 1950s style dance will be held at the bandstand similar to those during its heyday. However, one could never be replicated to match the magic of that era.

Click on a photo then use your left-right arrow keys to cycle through the gallery. 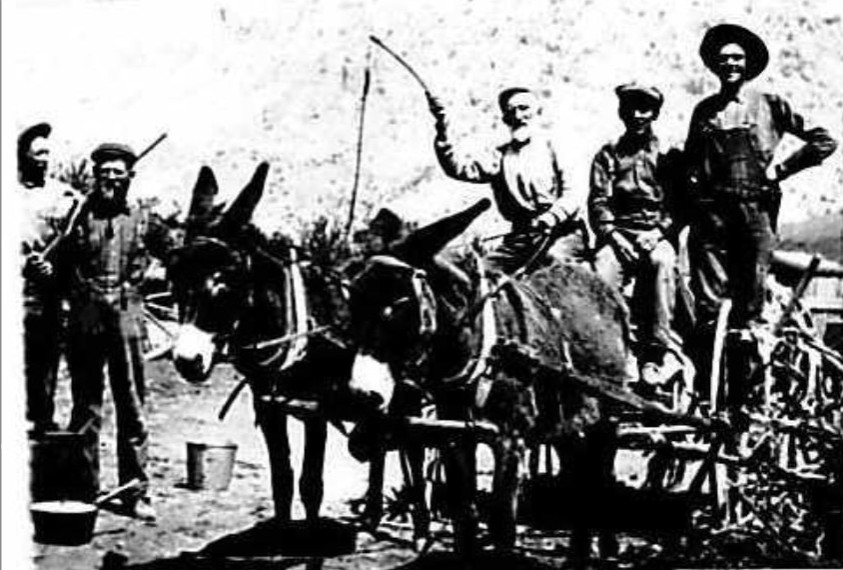 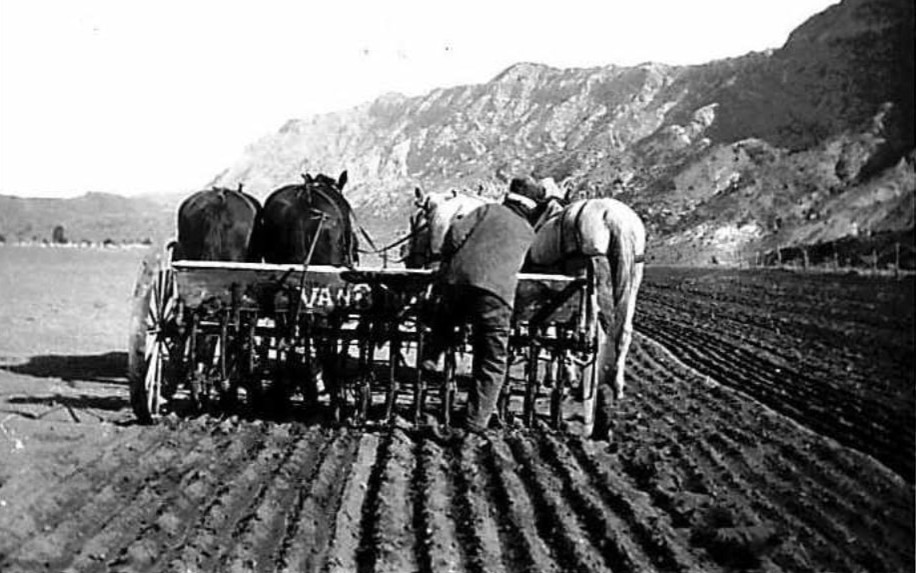 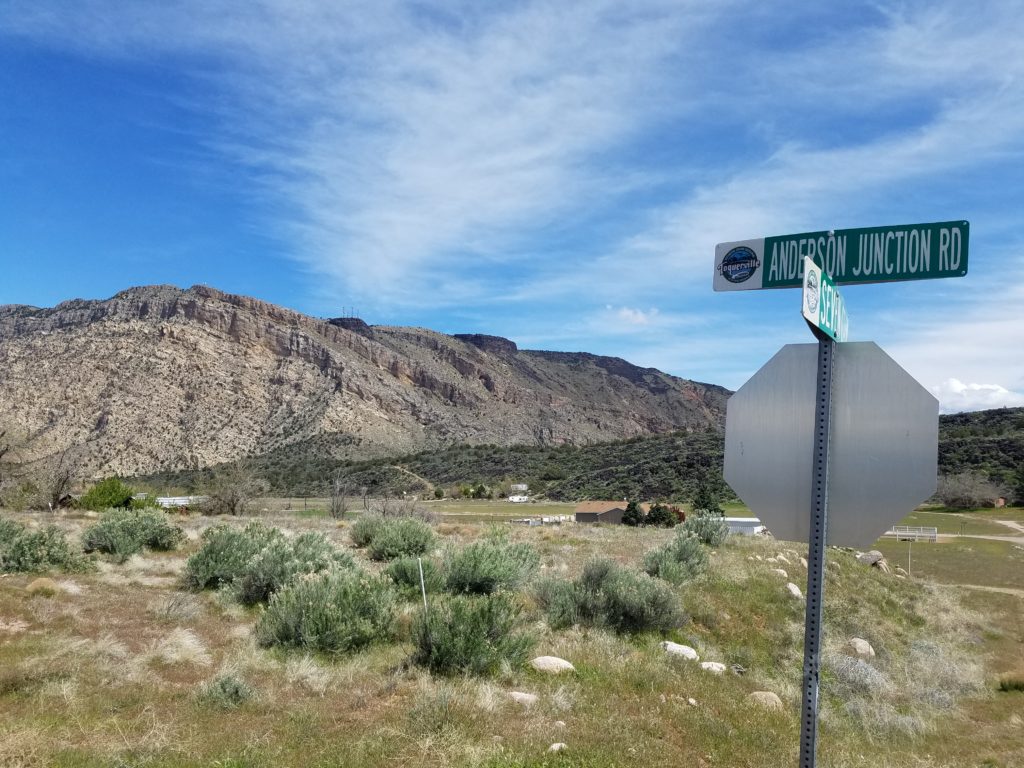 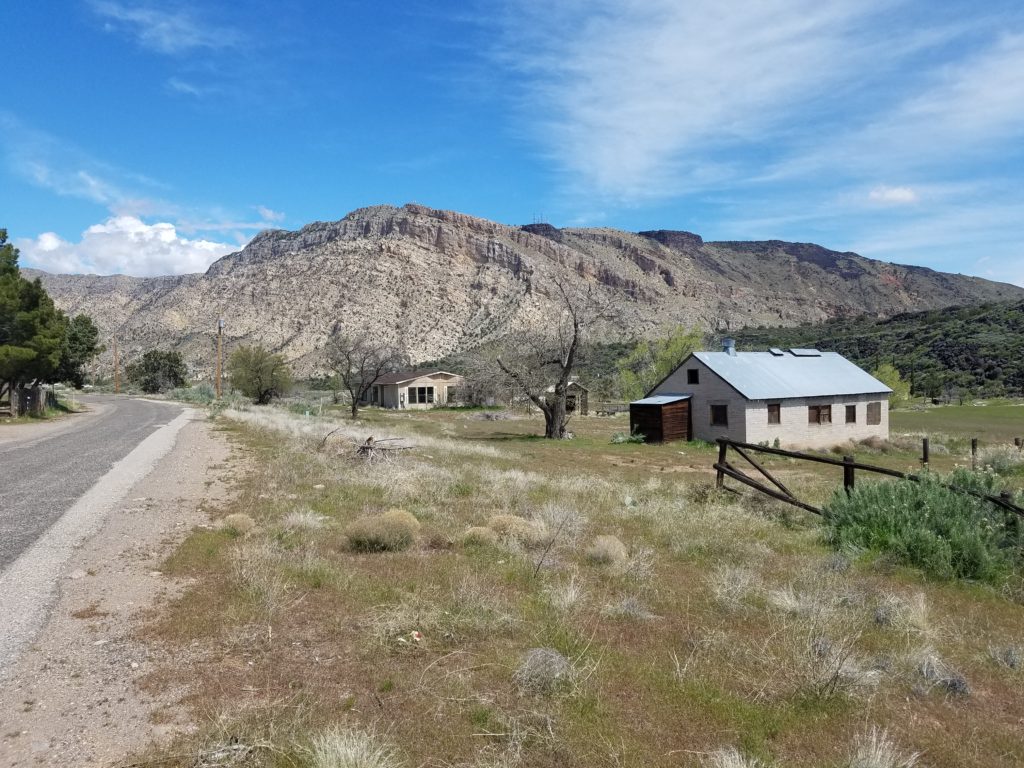 This panorama shows the building and landscape of Anderson Junction, near I-15 Exit 27 north of Toquerville, Utah, April 10, 2020 | Photo by Reuben Wadsworth, St. George News 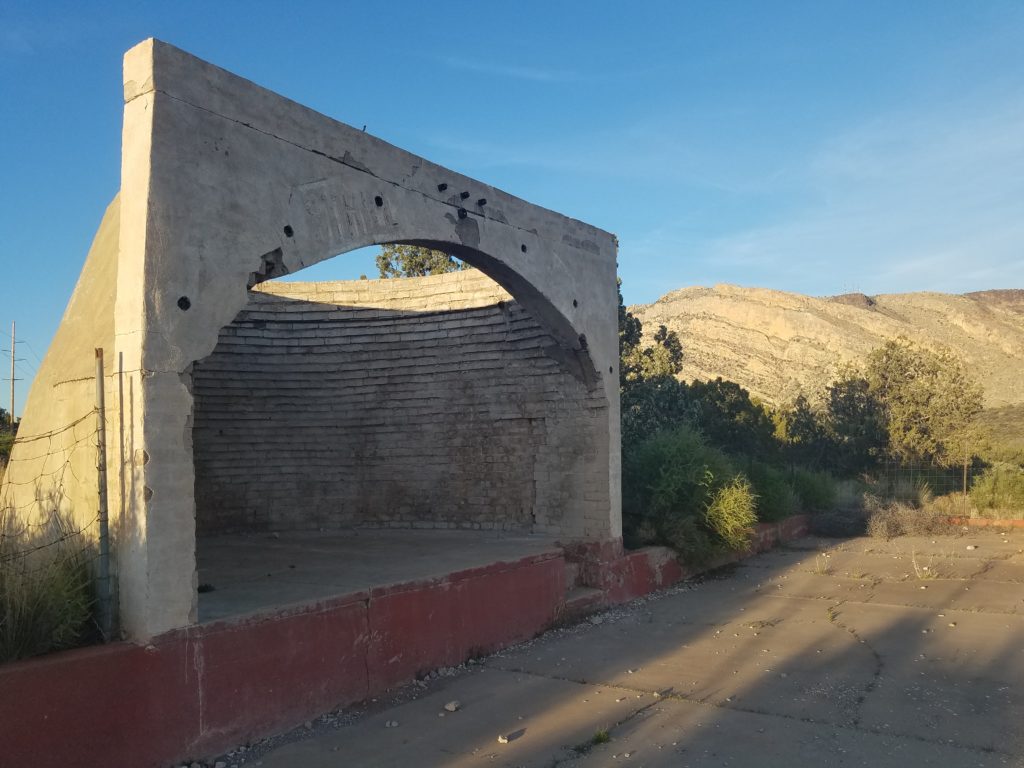 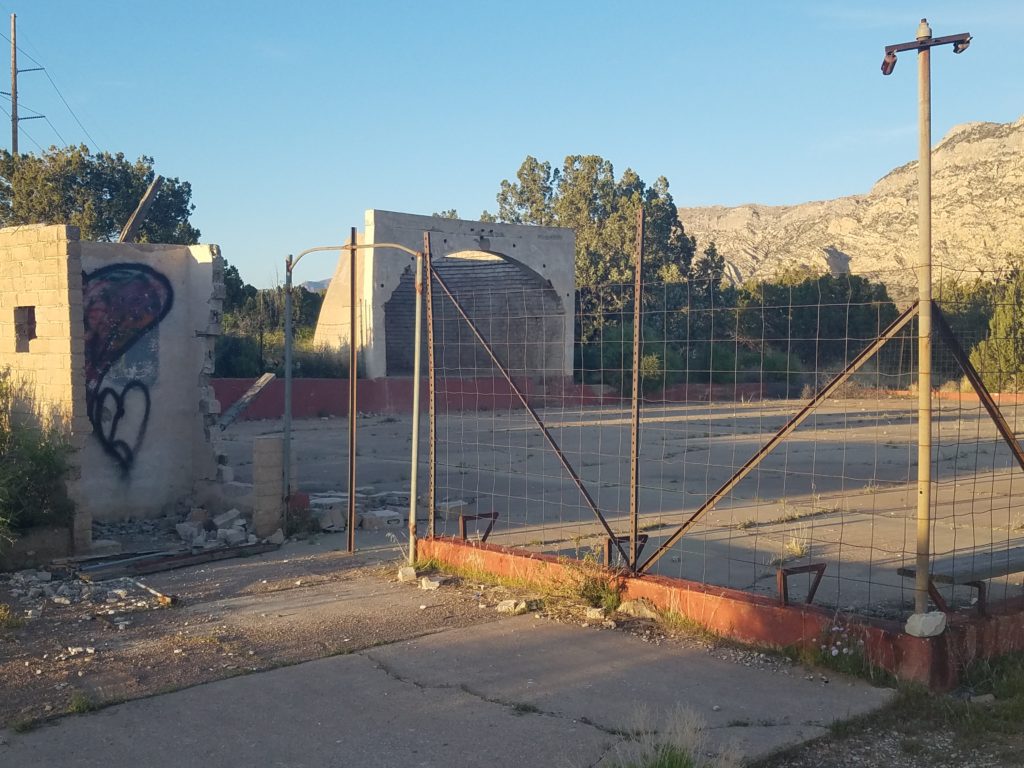 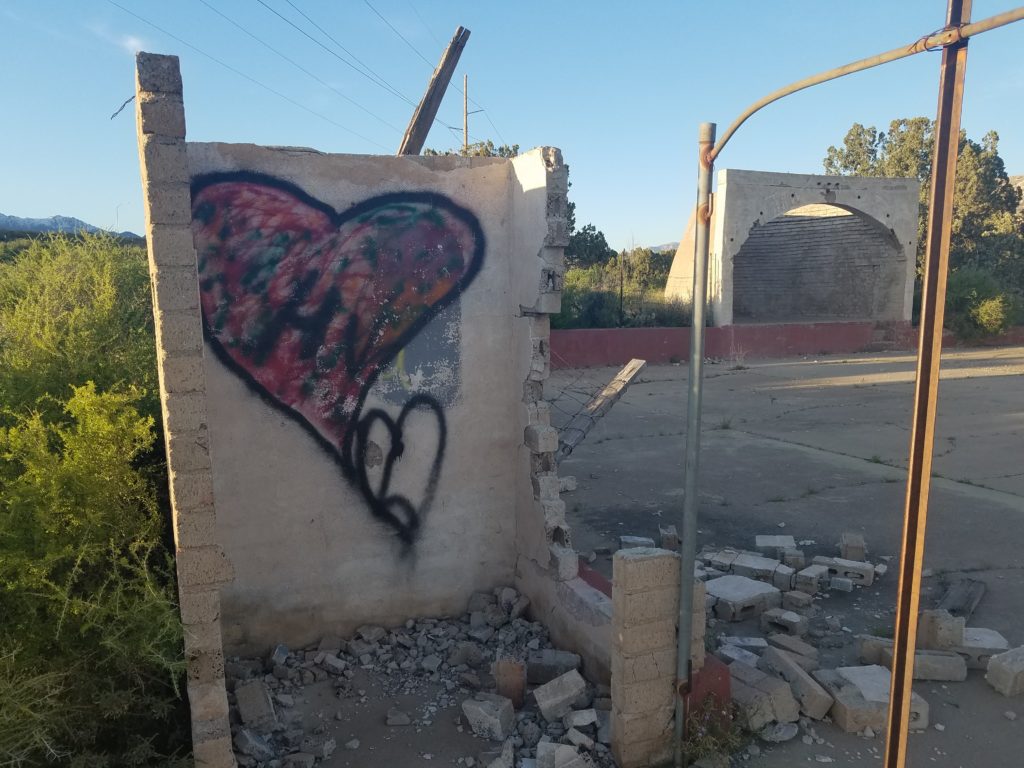