ST. GEORGE — “If these walls could talk” might be an apt idiom to use when speaking about a small home that sits on 200 South in St. George.

The home, which is believed to be nearly 100 years old, has a rich story to tell of Southern Utah’s growth and change. But also of the family and friends who filled its walls and left more than a legacy behind.

It is a story that immediately captured the hearts and imaginations of Southern Utah residents Ed and Lea Ann Braithwaite who bought the home in 2019 with intentions to remodel it and use it as an investment property.

The renovations yielded some interesting finds – pennies from the 1920s, 30s and 40s, vintage toothpaste, and marbles among them – but perhaps none more intriguing than the diary of a young girl who was born in, and lived in, the home.

Ed Braithwaite is a retiree with a penchant for buying and renovating homes to use as investment properties. Something he calls a hobby. In the fall of 2019, Braithwaite had finished a home that he was certain was going to be his last.

But the home on 200 South had other ideas for Braithwaite. At least that is how his wife described the way it felt when her husband came home telling her to grab the checkbook.

It was like the house and the diary were calling out to her husband, she said.

In his home renovating hobby, Ed Braithwaite said he likes to find homes in the downtown area of St. George because they are interesting and many of them are quite old. That is certainly true of the house on 200 South, and when Braithwaite saw it, he said he couldn’t pass it up.

But when Braithwaite called on the listing, he discovered that there were already 10 offers on the property. Through a combination of a solid offer and being able to close relatively quickly, he was able to purchase the home.

Braithwaite said that the house was in really rough shape and that it had an odd floor plan for a home as well as a strange foundation.

“I didn’t know why it was the way it was,” he said, adding that despite the condition, he could see the home’s potential.

Or maybe its walls really were trying to talk to him. As Braithwaite worked on the home, he started finding interesting trinkets and collectibles such as old pennies, toy marbles, layers and layers of linoleum flooring, and a tube of Crest toothpaste with Fluoristan.

Crest with Fluoristan was launched into select markets in 1955 and was expanded nationally in 1956, according to the brand’s History of Toothpaste found on their website.

As renovations continued into the home’s bathroom, Braithwaite said one of the people working on the home with him called out for him to come see what else had been found.

The worker had uncovered a diary along with an old, worn pencil which had been tucked into the wall and sealed behind an inset medicine cabinet.

A self-proclaimed history lover, Braithwaite had already uncovered a paper containing some unique history about the home while doing demolition on a cabinet.

As it turned out, the home had not always been situated on 200 South. It was once a small restaurant located on the highway (Highway 18 today) in what was known as Sandtown – an informal area of St. George north of 500 North and west of Diagonal Street, according to the Washington County Historical Society’s website.

From the research Braithwaite did, he figured the building was somewhere near Dodge’s Pond, a popular recreation area that was used for picnics and swimming.

According to the Washington County Historical Society’s entry on Dodge’s Pond, “Someone convinced the owner that dynamiting the spring that fed this pond would increase the water flow. He tried it, but the water flow stopped, and the pond dried up.”

In the 1930s, the restaurant, which was owned by Harry Shirk and his wife Viola Bunting, was put up for sale. The building was purchased by Archibald Douglas Wallis for $375.

An excerpt from the home’s history written by Wallis said the following:

My brother Fergus, Harry Fullerton and Jim Linder got two teams, two wagons, four telephone poles and moved the house down on our lot on second south. The South Ward had bought it from Pearl Cobb. I gave the ward $600 for the lot with water.

Braithwaite said the building’s history as a restaurant helped explain the odd floor plan and the different foundation as the home was not built on the lot but rather moved to the lot and set on I-beams.

The history also helped Braithwaite start to unravel the mystery of the diary. Another passage of the home’s history mentions that Wallis and his wife, Beatrice Larson Wallis, gave birth to a child in the home.

“Cleone, our second daughter was born in our home on November 26, 1936. Nurse Seegmiller and Dr. A.W. McGregor in attendance,” Wallis wrote.

Cleone Wallis, later Cleone Davenport, wrote in her diary from 1950-1953. The journal offers snippets of what St. George life was like in the 1950s for a teenage girl.

“(She) talked about her LDS ward and her school, her feelings toward boys and life in general,” Braithwaite said. “One day she noted that her favorite dog had died, and she wondered if dogs went to heaven and that she hoped they did.”

Other passages talked about how much she loved to dance and play sports and spend time with her friends.

It cost a dime to go to the movies at the time, and she wrote about attending the 1951 film “Thunder on the Hill” starring Claudette Colbert and Ann Blyth with Robert Douglas and Anne Crawford at the Dixie Theatre, Braithwaite said.

Cleone’s words about her everyday life endeared her to Braithwaite, who read many of the entries to his wife and eagerly tried to match family names in hopes of finding a rightful owner.

Then fate, or rather a woman, knocked at the door.

Braithwaite said he was working in one of the rooms of the home when he heard a voice asking if anyone was there. A lady came in and told him that her mom used to live in the house and was actually born there.

The woman, Gina Davenport Prisbey, was Cleone’s daughter, and she remembered her mom telling her about the diary, but she didn’t know where it was hidden. So, when she saw the home being remodeled, she decided to see if it had been found.

“I walked in, said ‘knock- knock, hello, is anyone here?'” Prisbey said. “I also said that I was looking for an unusual thing and was hoping he might (have) found my mom’s diary she had hid inside a wall.”

On Monday, accompanied by her sister, Cheryl Davenport Staheli, Prisbey returned to the home on 200 South and was reunited with her mother’s diary.

“I kind of feel like we were led to it for a special reason,” Prisbey said of the diary, adding that she was feeling very blessed to have that piece of her mother’s life.

Cleone Wallis Davenport died on Sept. 17, 2018, and while she had left some memories of her life, her daughters were excited to learn about her life as a teenager and read so many familiar names of family and friends of their mother whom they recognized.

The meeting was a surprise for Staheli who had actually lived in the house when she was a younger newlywed. In fact, it was Staheli who had left the copy of the home’s history in a cabinet hoping that it would be found and read, she said.

Staheli said she was feeling very close to her mom and the rest of her family as the two sisters sat on the front porch and read about Cleone’s early life and shared memories of the place where their mother grew up.

It was an emotional moment for Braithwaite as well, who said that this really is his last home renovation and that he was so happy for it to be this house. 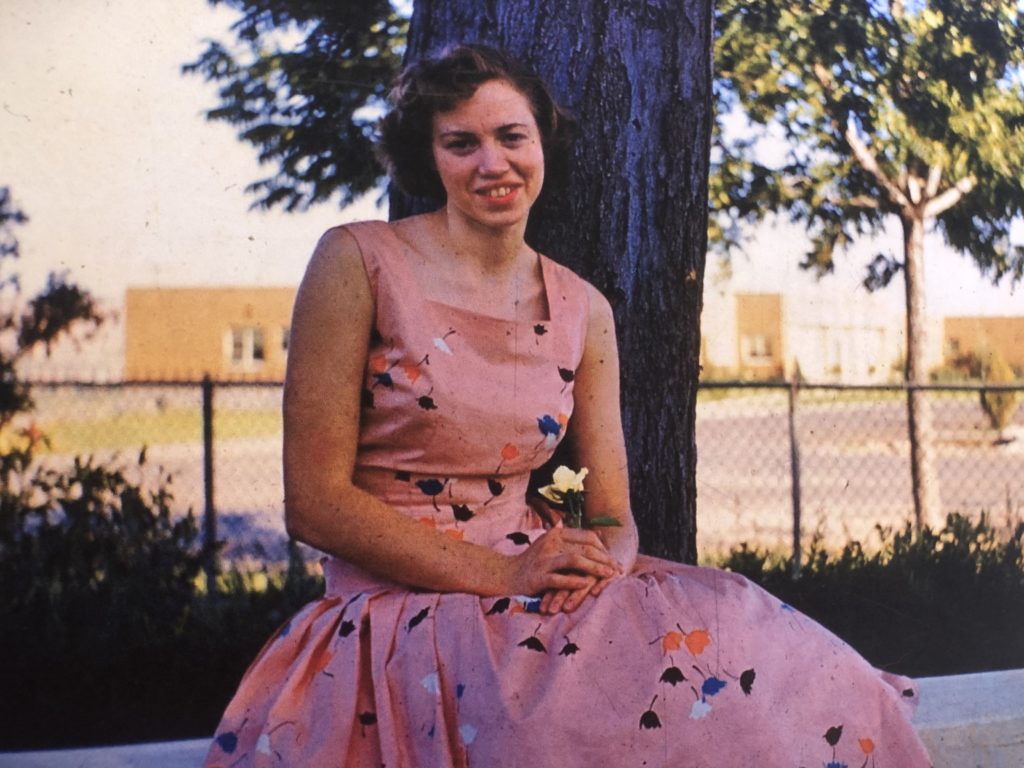 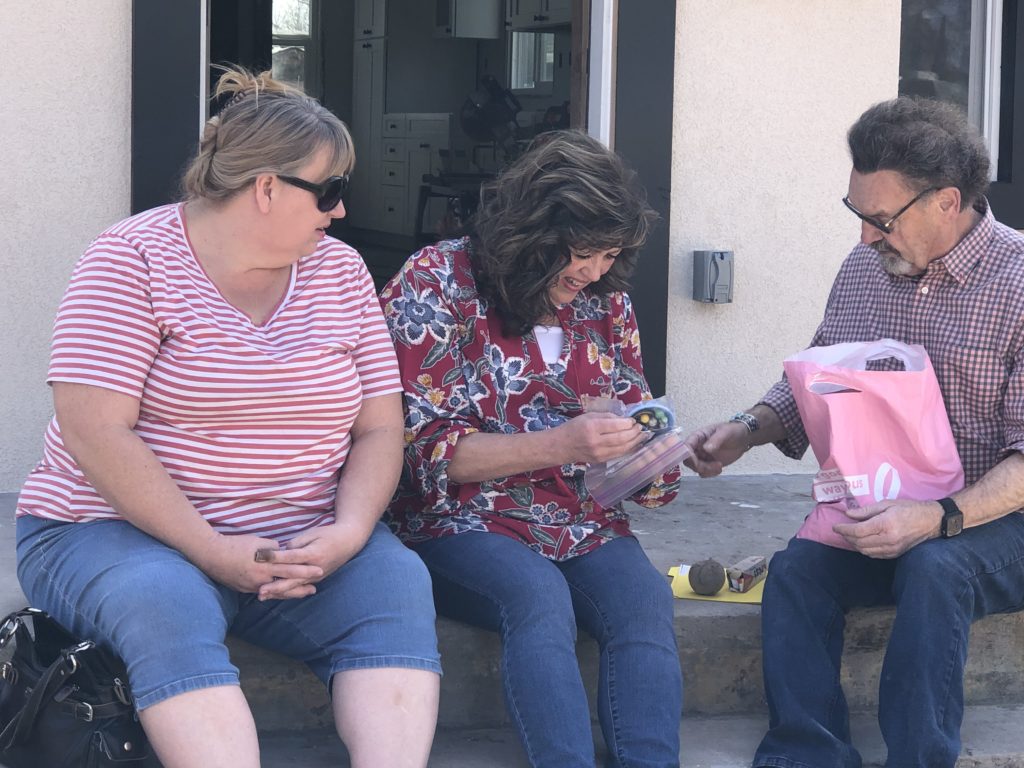 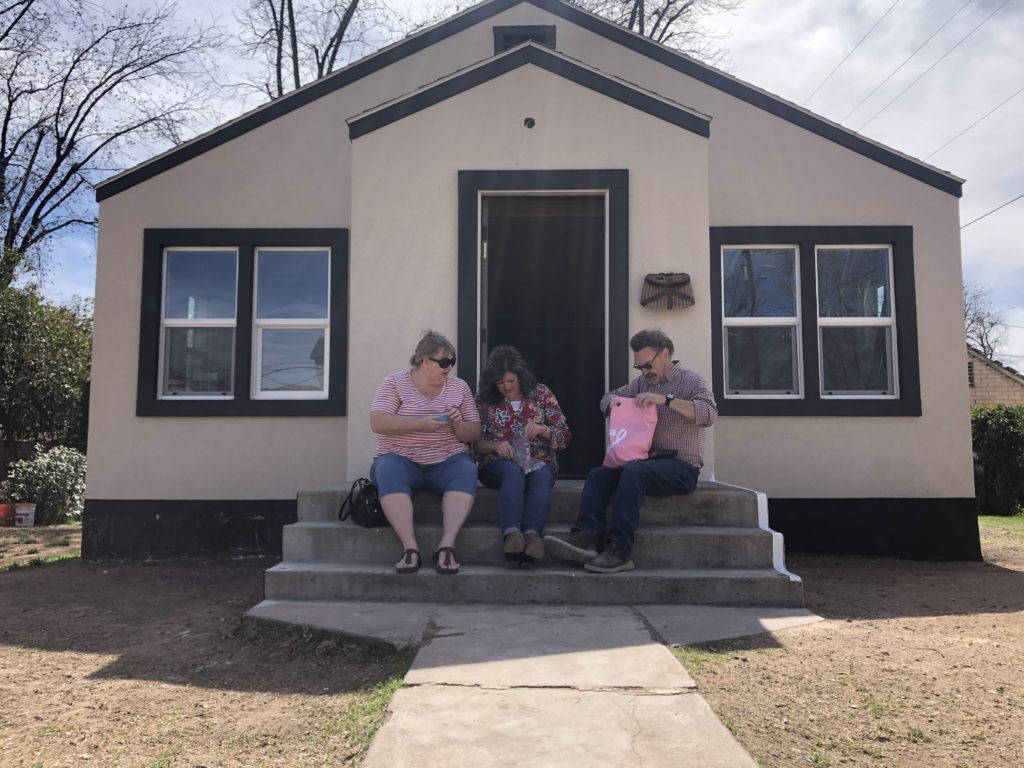 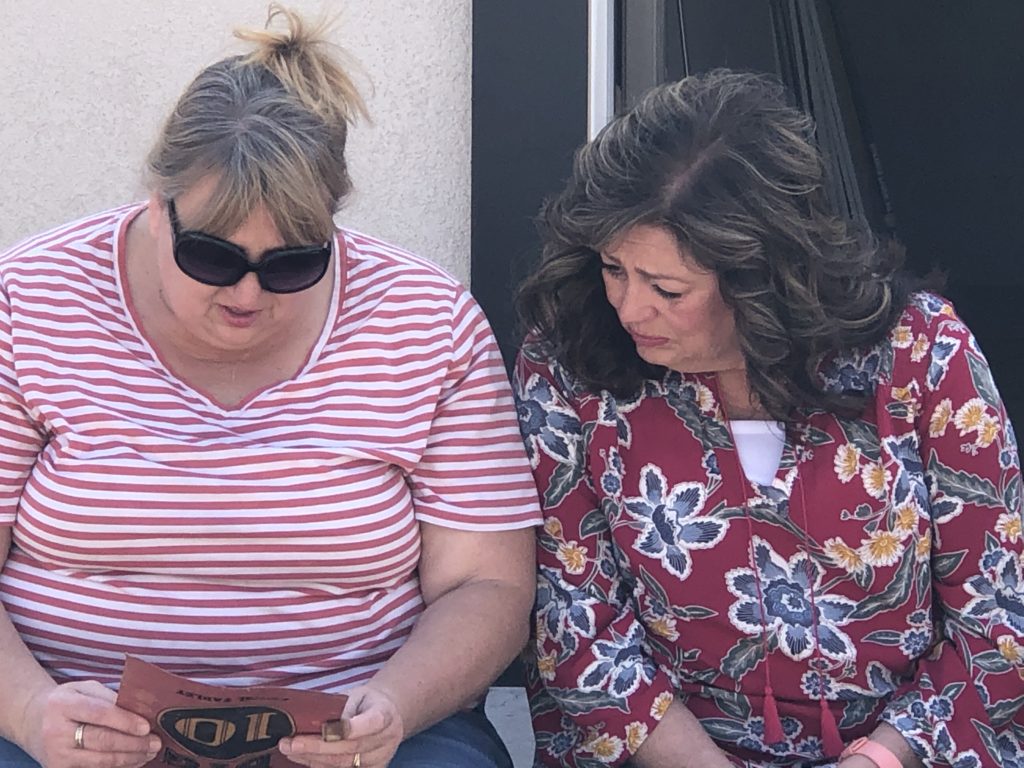 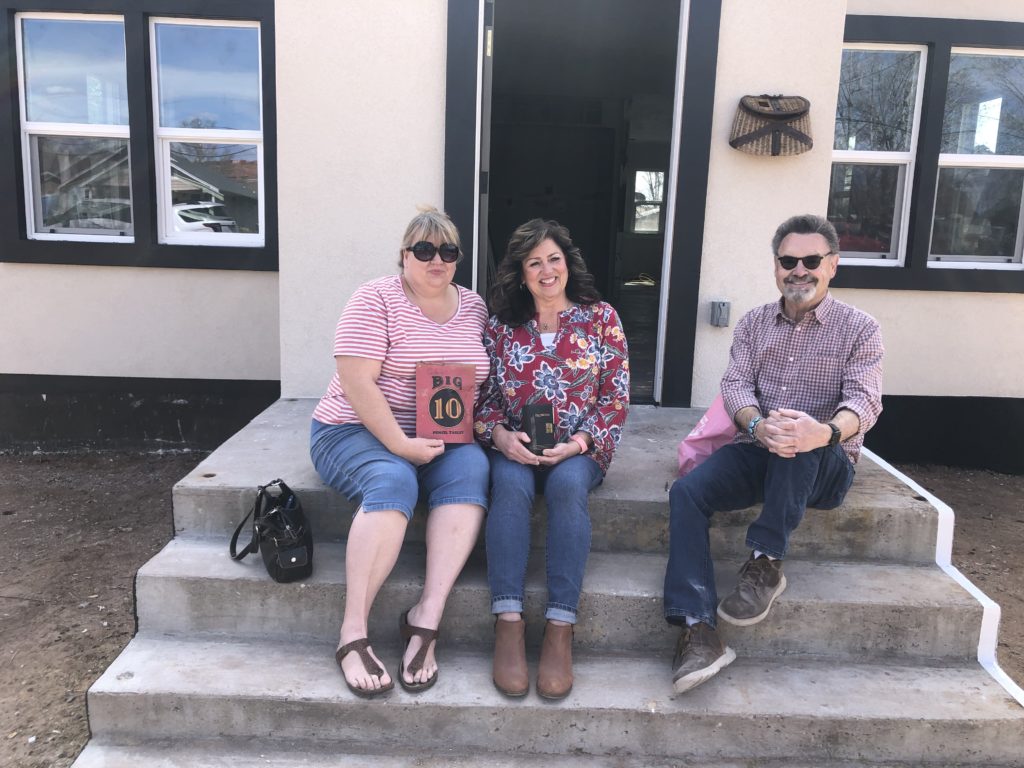 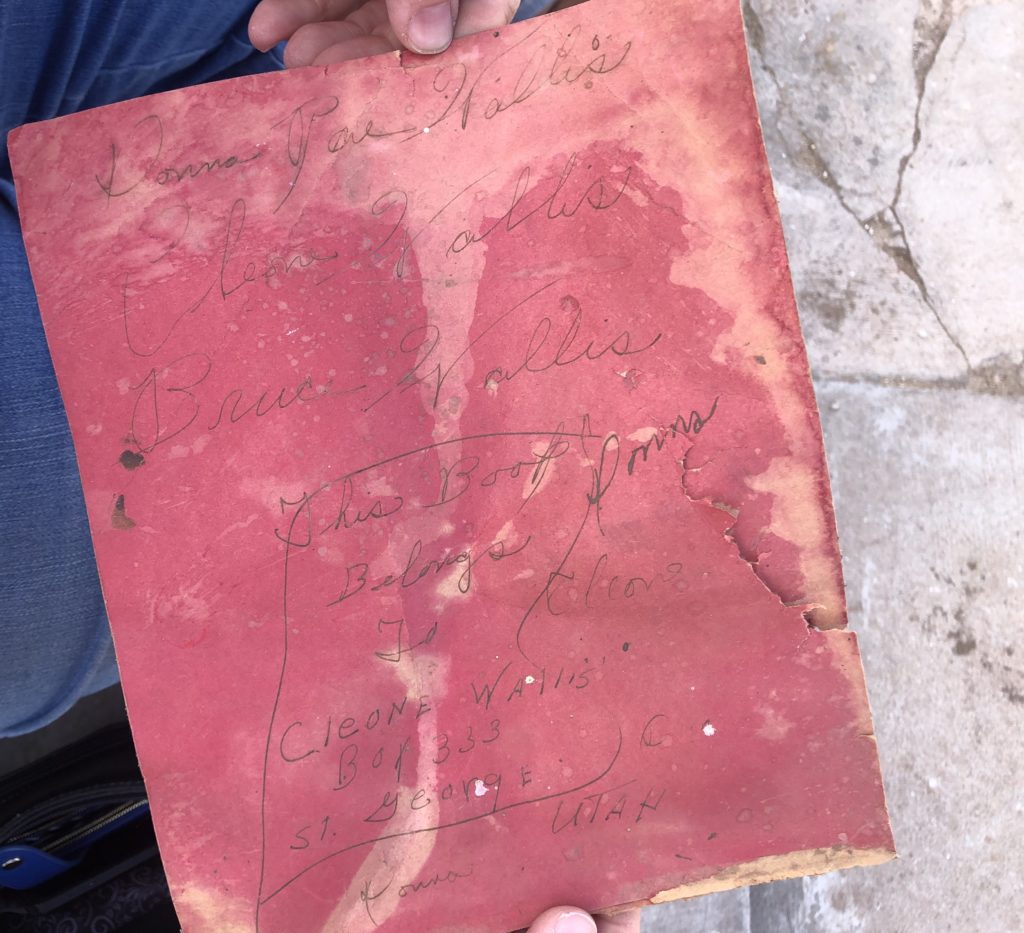 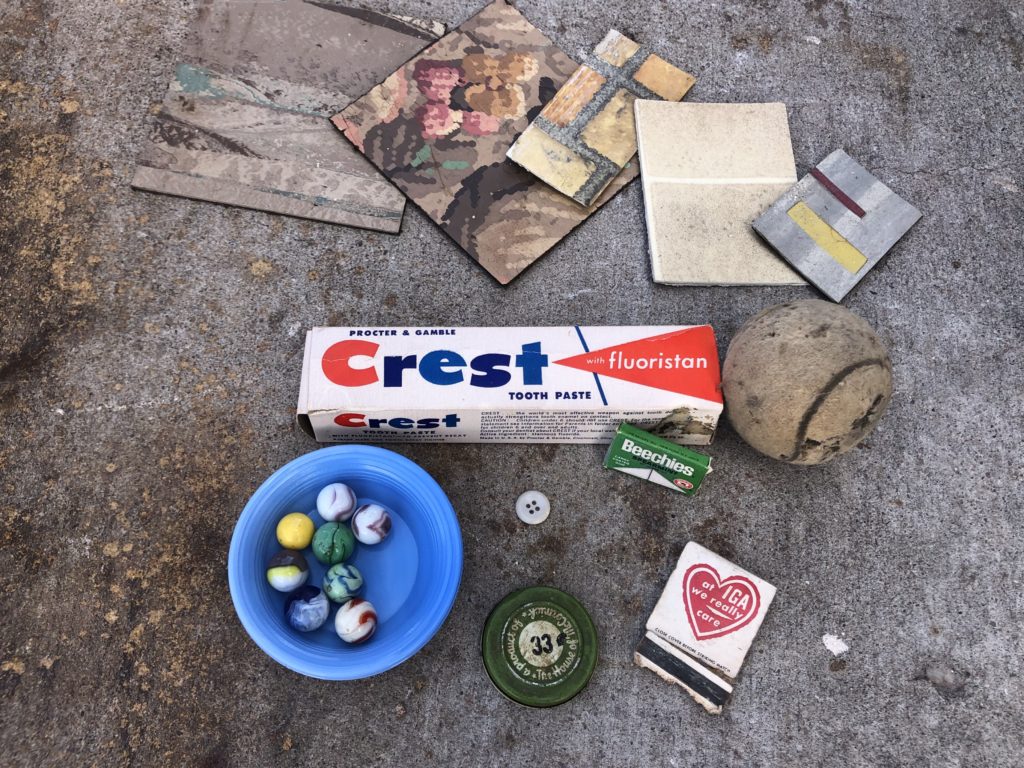 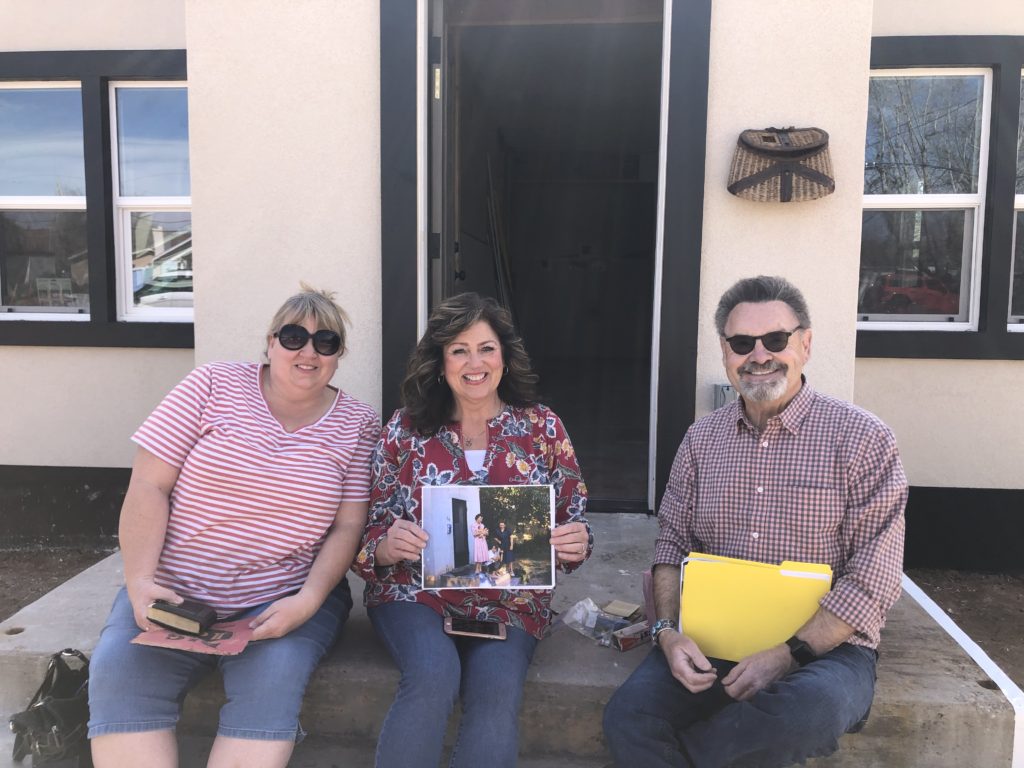 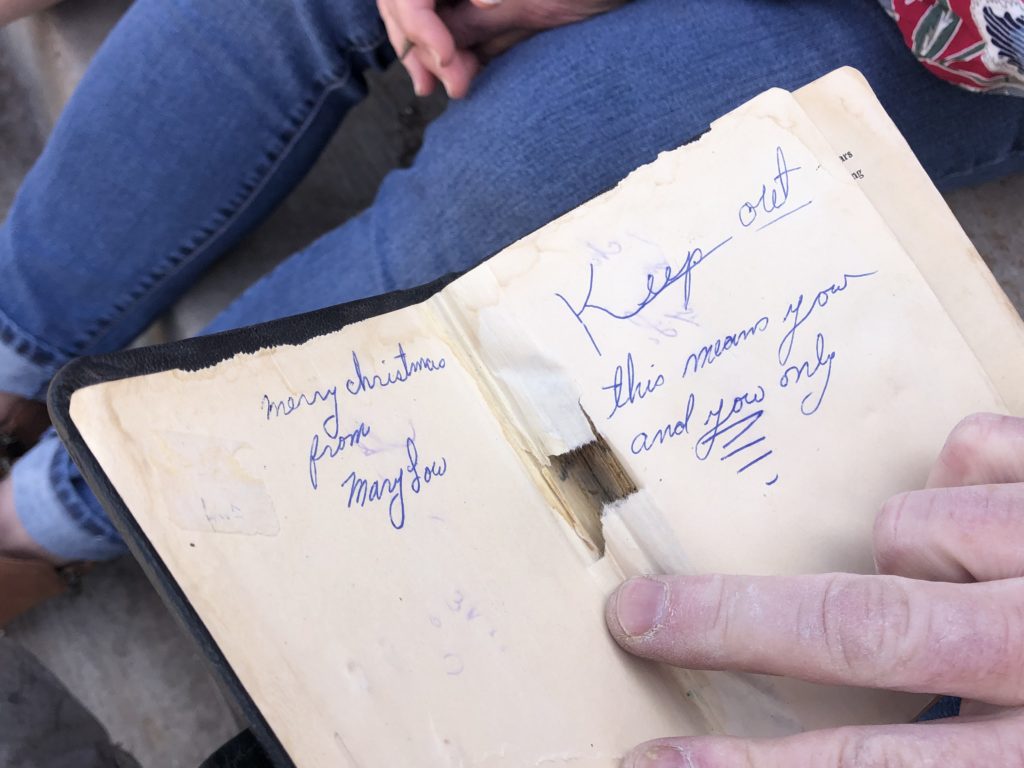 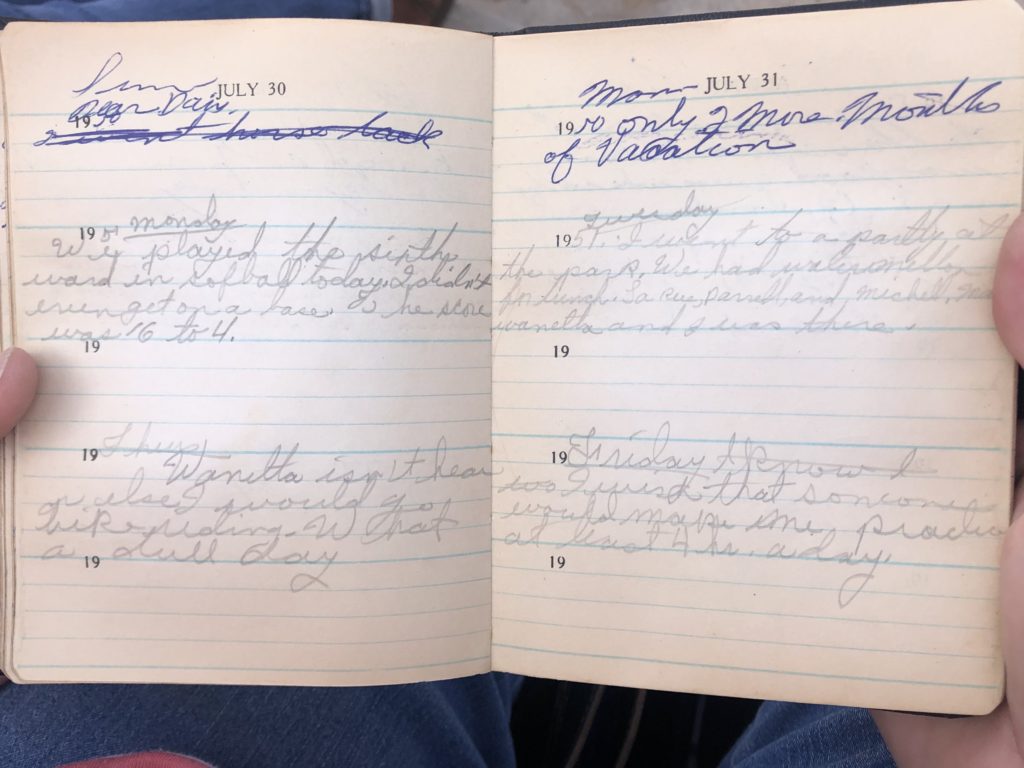 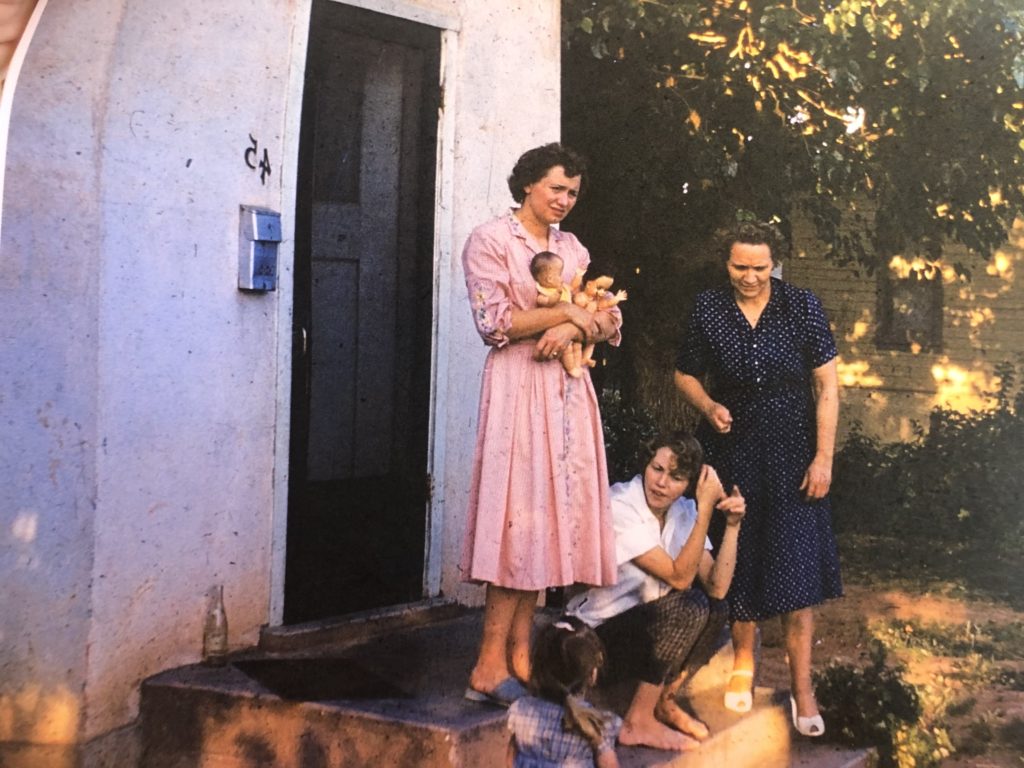 An historic photo of Beatrice Wallis (dark dress) and some of her children and grandchildren on the porch of her home in downtown St. George, Utah, date not specified | Photo courtesy of Ed Braithwaite, St. George News