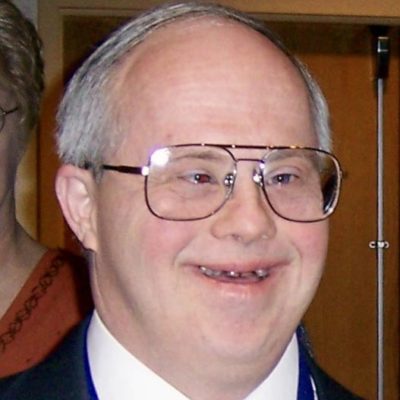 Layne Kay Johnson, 65, son of Dr. Sheldon B. and Leatrice Sproul Johnson was born in St. George, Utah, Sept. 17, 1954, and peacefully passed away there, Feb. 10, 2020. Born with Down Syndrome, Layne was regarded by authorities to be of such low intellect as to be an unbearable burden to his family. They were advised to place him in an institution and forget he was ever born. His parents were inspired to keep him as a valuable part of their family, a son to love, to teach, to discipline and encourage in faith. It was not long before they knew of his close connection to the Savior, that HE was sent to love, to teach and encourage THEM.

Layne’s life has been the epitome of success. He and his sweet wife, Shauna Lee Nichols, married in the St George LDS Temple, Nov. 26, 1993, for time and eternity. Their love and independent, joyful life together is inspiring. Their home was filled with music, as Layne played the organ, Shauna the piano.

Layne was blessed with four loving brothers: Kerry, Kris, Gale and Brett, who helped him learn to do chores, work on the family farm, play sports, play the organ, read and study, worship and serve church missions. Layne served his short mission in the Philippines along with full-time missionary brother, Kris. He has won many achievement awards, but this was one of the highlights of his life.

Layne learned to drive tractors and loaders on the farm and became a skillful licensed driver. For 24 years, he was able to drive locally the car he had earned from working at JC Penney. A dependable, appreciated employee, he retired with a gold watch after 23 years.

Layne wanted to do everything his brothers did well. He had excellent examples! His scoutmaster, Doug McKnight, helped Layne become an Eagle Scout, another highlight in his life. Layne’s great sense of humor and patient dedication to doing the right thing has blessed all of us. There are stories to tell!

Layne was a pioneer in many ways, paving the way for children with Down Syndrome. His father, Sheldon Johnson, a young school board member, was surprised when he and Layne’s wonderful mother, Leatrice, saw that Layne could learn to read, though doctors and educators had said it would not be possible. They became determined to find a way for his son and all children to have opportunities for educational growth. At this time these children were barred from attending Utah’s public schools. They were often hidden away from the public. He and Leatrice went from door to door, trying to find the children born with disabilities after the large atomic test called “Dirty Harry.” They found many more disabled children than one would find in normal times.

Sheldon persuaded our Washington County School District it might be possible, and organized a classroom unit for children with disabilities, who were born in the area about nine months after fall-out from this atomic test. Layne became one of those pioneer children who proved that they COULD learn and deserved a chance to participate in the benefits of our public school system. This classroom unit was a first and an amazing, successful experience. Other school districts came to see what they were doing. Layne’s influence helped open a new special education world of opportunity for all these valuable children.

Once you knew Layne, you knew that he would pursue his own righteous goals and objectives, not those programmed into him, or forced upon him. He was perceptive, sensitive and talented in relating to people, with friendly encouragement for every stranger he met. He was, is, a laughing man of strong spirit, born with handicaps. He is the product of love, high expectations and consistent nurturing, a man of purpose and promise who knows how to follow a dream.

Perhaps you are one of those persons who helped add so much to his life. For this we thank you. Everyone loves Layne. We share gratitude for having had an opportunity to know, to laugh with, and learn from this dear husband, son, brother, nephew, uncle, cousin, friend and amazing man.

“I be ready,” Layne said. He was waiting for Jesus to come again, wearing a red robe. “Then I see my mom,” he whispered, with tears in his eyes, “and I be NORMAL again.”

We recognize the goodness of so many of you who befriended Layne and Shauna, those of you who have served with Christ-like love right to the end, especially brother Kris who was always there for him. We are indebted to the great folks at ARC, and LDS Special Needs Mutual. A special thank you to caregivers at St. George Rehabilitation, and Canyon Hospice.

I asked, “When Jesus comes again, Layne, what can you do then that you cannot do now?” “Well, one thing, I get in my car and I drive anywhere I ever want to go!” He knew his limitations, but he always aimed high and never gave up trying.

In lieu of flowers: Remembering Layne’s devotion to the Savior and his life-long missionary work, you might choose the missionary fund at https://www.ldsphilanthropies.org/missionary or the charity of your choice.