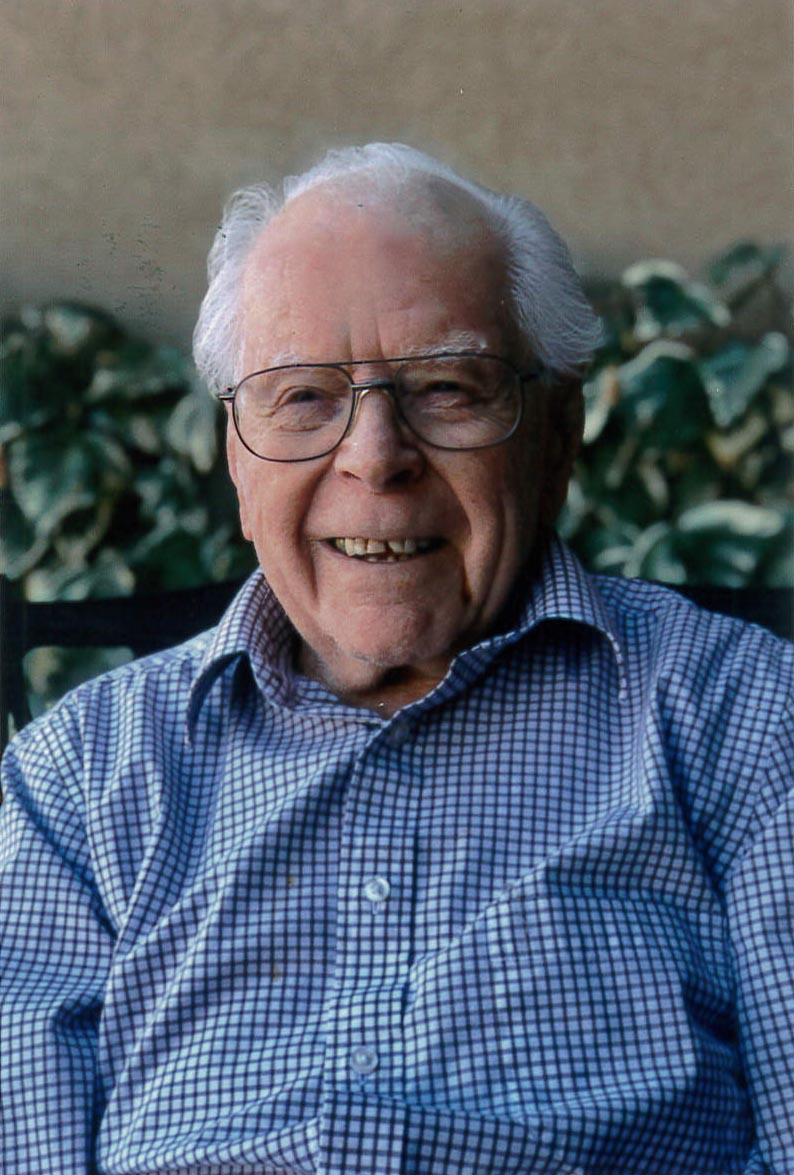 Robert Marden Johnson, passed away on Feb. 11, 2020, in St. George, Utah, incident to age, and is now again with his sweetheart. He has left this information concerning his life here on this mortal probation:

My 103 years of life upon this earth has been a wonderful, exciting, spiritual and occasionally a sad and regrettable journey. I was the oldest of 10 children, born to Wallace Johnson and Phyllis Judd Johnson in Grantsville, Utah on July 8, 1916.

I graduated from Grantsville High School in 1934. I went to LDS Business College for one semester. I was called to the Tahitian Mission by President Heber J. Grant, when I turned 19, in 1935 and I spent 33 exciting months there. My mission President, LeRoy Mallory, counseled me to find a special LDS girl to marry within one year later I got home. Eleven months after I got home, I married a beautiful LDS girl, Dorothy Louise Watts, in the Salt Lake Temple, May 22, 1939.

Four days after we were married, my father passed away at age 45. Eight months later, my mother was killed in an automobile accident, leaving 10 children orphans. I was 23 at the time. Two of my brothers just younger than I, were also married. My dad owned a grocery store in Grantsville, and it was up to me and my brother, Kenneth, who was married to a Grantsville girl, to run the store and support the seven younger children. We had a special cousin, Della Williams, who lived next door, and had graduated from high school, to come and live in our parents’ home and take care of the 7 children, the youngest being only 2 years old.

This was a heavy burden on me and my new bride. After 11⁄2 years, I felt my brother could handle the store, so my sweetheart and I left Grantsville and went up to Amity, Oregon, where Dorothy’s folks lived. From an uncle of Dorothy’s, we heard of a job with a grocery chain, “Tradewell Stores”, run by M.L. Bean. He later went into the drug store business, which developed into a large company called “Pay N Save Drugs”. I worked for M.L. Bean 20 years.

Our four beautiful, special children were born in Washington State, one in Seattle and three in Everett. They were a special gift from our Father in Heaven. We had been married nine years and had not been blessed with children.

I was inducted into the Navy Seabees in 1943 and was given two weeks to get my affairs in order. During that time, we went back to Grantsville to visit my brothers and sisters. Also, we went into Salt Lake City because we had heard that Apostle Charles A. Callis, had a special gift of giving blessings to wives who had not, after many years, been blessed with children. He gave my sweetheart a special blessing that she would bear children. After two years and three months in the 103rd C.B. Battalion, where part of that time was on the Island of Guam, I got back home on December 24, 1945. On May 17, 1948 a daughter came. On May 7, 1949, a son, on May 31, 1952, a daughter, and on March 13, 1961, another daughter.

In 1963, we left the Seattle area and moved to Salem, Oregon, where we bought five acres, which had a nice home on it, where we could raise our four children, in a different environment than the busy streets of Seattle. We spent 30 years there raising a big garden with pear, apple, cherry and walnut trees. I called it our own special Garden of Eden. It was during these 30 years there that my sweetheart and I were blessed to be able to serve four missions together. Two of which were back to Tahiti, the Los Angeles Temple Visitors Center and the St. George Temple Visitors Center.

We fell in love with St. George and the beautiful surroundings, so after our missions were completed, we decided to live here permanently.

My sweetheart passed away, April 21, 2006, after 67 years of a beautiful life together. I am so thankful for the gospel of Jesus Christ, which has brought great joy into my life and I hope that my life has touched and blessed the lives of a few of our Father in Heaven’s children, here on earth, especially our own posterity.

I am thankful for the whispering of the spirit, which let me know that all would be well with my brothers and sisters. I am so thankful for the St. George Temple, which has given me the privilege to spend many hours there working on behalf of the dead.

It has been my privilege to serve in a bishopric, on two different high councils, as a Bishop, and as a Stake Patriarch in three different stakes.

I look forward to the reunion with my sweetheart, who I have missed so much these past 14 years. With my passing, there is only a sister, Sherry Johnson of Overton, NV, left of the 10 children. To our posterity, we love you and hopefully, we will all be together again in the eternities.

In lieu of flowers, I would appreciate any donations to the missionary fund or the humanitarian fund, of The Church of Jesus Christ of Latter-day Saints.

Optimize your health this summer! Tips for living life to the fullest