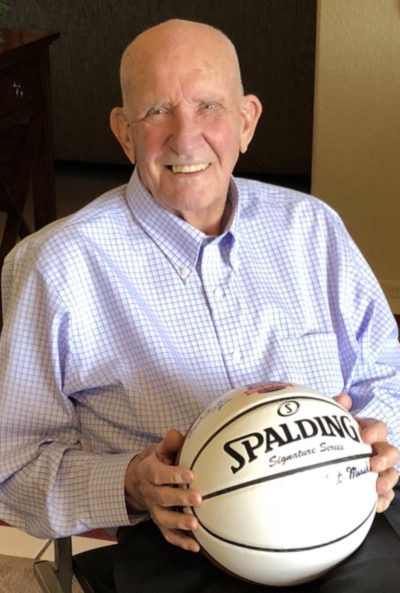 Frank Ladell Andersen, 90, passed away peacefully at Dixie Regional Medical Center on Dec. 29, 2019 from causes incident to age. He was born on Oct. 25, 1929 in Malad, Idaho to Laurence Leroy Andersen and Elizabeth Barnett. He married Donna Lou Jensen of Fort Shaw, Montana, in the Logan Utah LDS Temple on Jan. 15, 1951.

Ladell, “Dell” or “Andy,” the youngest of seven children, grew up in Malad, graduated from Malad High School in 1947 and attended Utah State University, graduating in 1951. He met Donna in the Old Main Building at USU. Campus life continued over many years while raising their sons.

A Korean War Veteran, he was stationed at Sandia Base in Albuquerque, New Mexico, from 1951-1953. He worked for Central Bank in Denver, Colorado, from 1953-1956, where he played ball on a team sponsored in the Old Industrial Basketball League. He moved on in 1956 to become an assistant coach for the University of Utah for five seasons and in 1961 became head coach for Utah State University. He held this position for ten years until being named head coach in 1971 for the Utah Stars, a professional team in the ABA. After two seasons, Ladell chose to return to USU for another ten years as athletic director. In 1983, he accepted the offer to be head coach at Brigham Young University and served there for six years, until retiring from coaching in 1989. He had the singular distinction of coaching for the three major universities in Utah with more wins than losses at each and always leaving on good terms, never being fired from a job.

His greatest happiness was in being with his wife and sons: Clint, Larry, Richie, Bob and Jim. They enjoyed many trips over the decades to Flathead Lake, Montana, with extended family. He had a passion for golf, history, service, puzzles, a good head scratch and lots of laughs. He was a faithful member of The Church of Jesus Christ of Latter-day Saints all his life.

Ladell was preceded in death by his parents; six siblings: Leon, Alta, Loren, Verna, Joe, DeVon; and his wonderful wife of 60 years. We rejoice in their reunion! He is survived by his sons and daughters-in-law: Clint & Janet (Arizona), Larry (Arizona), Richie & Jocelyn (Utah), Bob & Paige (Utah), Jim & Jeanmarie (Utah). Also 27 grandchildren and 43 great-grandchildren. Ladell wanted everyone to know simply: “It’s been a great life!”

Funeral services will be held Saturday, Jan. 4, at the Church of Jesus Christ of Latter-day Saints, 1950 N. Coral Canyon Blvd, Washington, Utah, at 11 a.m. Visitation will be from 9-10:30 a.m. at the church. Our sincerest thanks to his amazing caretakers, Diana Clark and the doctors and angel nurses at Dixie Regional. Arrangements entrusted to the care of Metcalf Mortuary, 435-673-4221. www.metcalfmortuary.com.