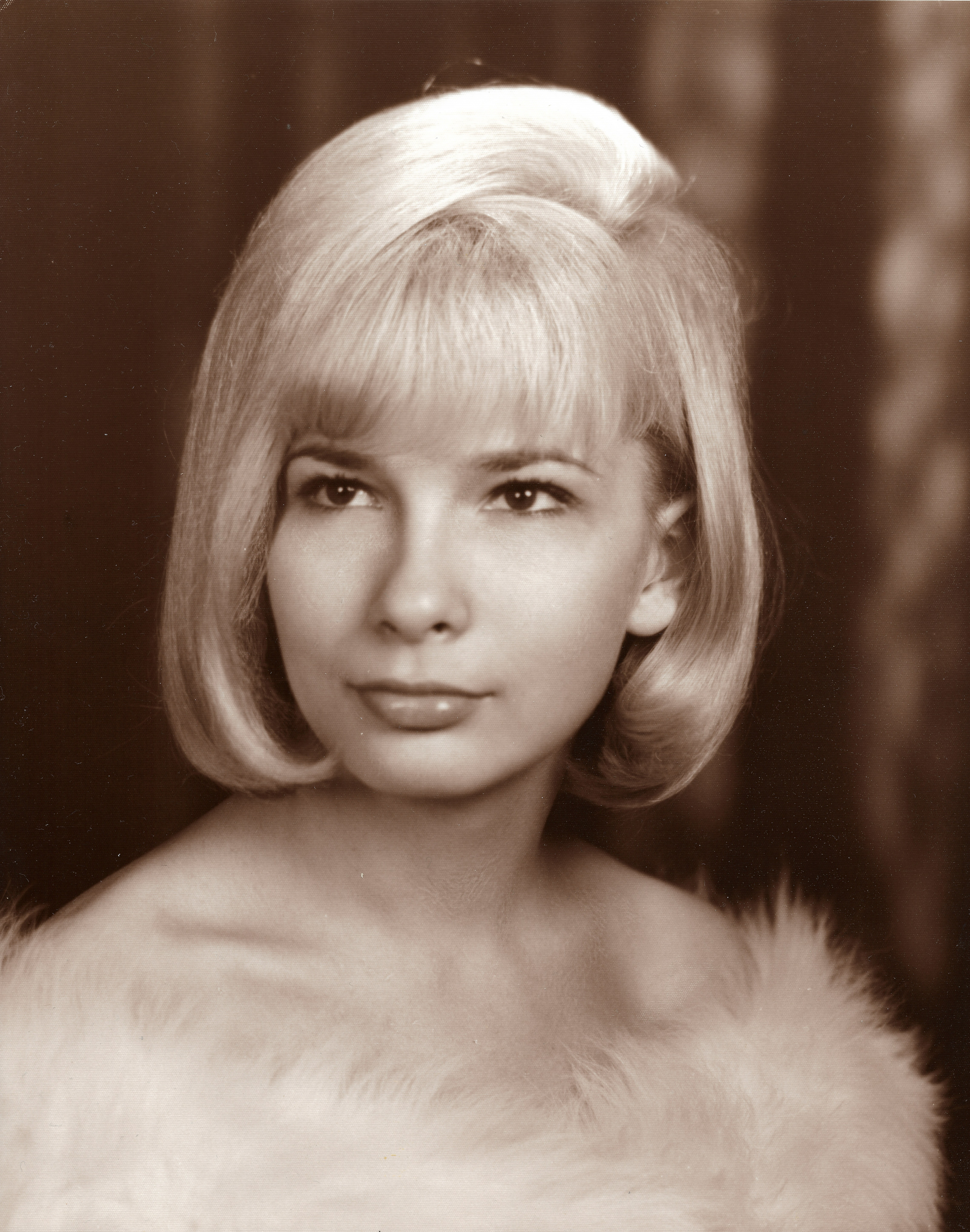 She was born March 10, 1945, in Ogden, Utah, to Marilla Littlefield Grambow and Frank Carl Grambow. She married Thomas Parry Peterson on April 22, 1966, in the Salt Lake City Temple.

Frankie was found in a cabbage patch — or at least that’s what her siblings told her. She was the youngest of eight children, and though her hair was blonde like her sister, her skin was olive and her eyes were brown, which was enough of a difference to make her worry. She didn’t dare ask her parents if it were true, because she was afraid they would say yes and then be forced to return her to the patch.

The truth, though, was that she was born in Dee hospital not long after her parents moved to Ogden from Henrieville, Utah, where her father, Frank, had recently retired as a deputy sheriff. The war was over, and there were many construction jobs available, so Frank changed lines of work to help build Ogden High School, something that would make Frankie proud for the remainder of her life when she would see that beautiful building.

They lived in Bonneville Terrace in old Army barracks, long buildings that each contained two homes, one on each end. Despite having a couple of siblings who were only a few years older than her, Frankie felt the closest to her half-brother, Carl Lemmon, who was quite a bit older. He was always kind to her. He flew planes in the Korean War, and because of his Native American ancestry, he was known around town as “Chief.”

When Frankie was only six years old, her father walked out on the family. One day, he went to the store and never came home. Frankie said there was no prelude to the abandonment — no fighting or arguments — and her mother was as surprised as everyone else. Somehow, her mother got them through it, and she soon remarried.

Frankie grew up in the LDS Church, but her mother and step-father weren’t particularly active. They forgot to have Frankie baptized until she was nine years old. Regardless, she remained active in the church after her baptism and was heavily involved in the youth program as a teenager.

People who only knew Frankie as an adult may not realize how athletic she was. In junior high, she joined the pep squad, and in high school, she played softball and basketball every chance she could. She played on the church teams, and even though it wasn’t her favorite, she played volleyball too. Years before she even met Tom, she was good friends with his cousin, Sue Peterson, who played on her softball team.

After graduating from Ogden High School, Frankie attended Weber State College for a year and a half, majoring in Physical Education. One day, while sunbathing at the Rainbow Gardens pool in Ogden Canyon, Frankie’s old friend from seminary, Jim Barclay, introduced her to his coworker, Tom, who was the on-duty lifeguard. They talked while Tom ignored the kids in the pool. Fortunately, no one drowned while he mustered the courage to ask Frankie out. And when he finally did, she said, “Sure. Why not?”

She liked him, even if he was a bit on the nerdy side, recently returned from his mission with out-of-style clothes. He picked her up for the date in style with his dad’s white Cadillac. The top, however, was down, which whipped her hair around, leaving her unimpressed.

Not long after, Tom knew Frankie was the right woman for him when he witnessed her hit a home run at a church softball game.

Tom and Frankie were married April 22, 1966, in the Salt Lake City Temple. It was a Friday, and they had to be back to work on Monday, so they honeymooned close to home in Park City.

Frankie worked at Hill Air Force Base, where she got to meet several generals and assistant generals in the Air Force. She worked with the Minuteman and the Titan-2 missiles. She watched them blow the roof off the Minuteman silo, and she even got to climb inside.

When their first child, Craig, was born, Frankie left the working world to become a homemaker.

Tom graduated from Weber State, and they moved to Boston so he could attend Harvard. Frankie loved Boston. She made close friends with other couples raising small children. Soon, she gave birth to her second child, Tracy.

While in Boston, Frankie learned to sew, thanks to the homemaking program in the Relief Society. She got an inexpensive sewing machine for Mother’s Day, and for years she made clothes for the kids, including moo-moos and dresses for the girls, shorts and Aloha shirts for Tom and the boys, and bloomers for baby Jeff.

After Tom graduated from Harvard, he got a job teaching computer classes at Weber State, and they moved back to Utah. During their short time there, their daughter Kim was born, and then Tom got an administrative position at Church College of Hawaii, which is now known as BYU-Hawaii. Before they could move into their house in Laie, they stayed in a hotel, and Tracy, who was still quite small, fell through the bars of the hotel balcony and split her chin open. When the doctor was done stitching her up, he said, “You’re all pou now.” That was the first Hawaiian phrase that Frankie learned, and it became her favorite. At the end of a good meal, she would often ask, “Are you all pou?”

Hawaii was a natural fit for Frankie. She was a beach girl. She and Tom loved to find glass balls that had fallen off Japanese fishing nets and washed up on the shore. Some were the size of a baseball, and others were larger than a basketball. She proudly displayed them in her home for years.

While in Hawaii, Frankie gave birth to her only Aloha baby, Jeff. He was born at the Kahuku Hospital on Oahu. The OB physician was a hippy, and the mirrors in the room were from a Mac truck. Tom had to hold the light, which had a broken hinge, so the doctor could see what he was doing.

After moving back to Ogden, Frankie gave birth to twins, Matt and Mike, her final two children.

Frankie was an artist, excelling in ceramics, stitchery, and porcelain-doll making. She was a visual learner and could pick things up very quickly. She joined a neighborhood stitchery club while living on Woodland Drive in South Ogden. They focused on Danish stitchery, ordering kits from Denmark and their linen from Solvang. Frankie’s stitchery has been featured worldwide in Vanessa Ann publications.

After taking a community education ceramics class, Frankie became an expert in that, too, and then she learned how to make porcelain dolls. She would make her dolls from scratch, using her own kiln and sewing the clothes and bodies herself. She made hundreds of dolls — some to sell, some to keep, and many to give away as gifts.

In the ’90s, Tom and Frankie moved to Sun Valley. She enjoyed her time there. She loved sitting by the resort pond watching the geese swim around and the occasional celebrity wander by. While there, she served as Relief Society President in the Sun Valley Branch, where she instituted a monthly visiting/teaching luncheon that became popular. For years after Tom and Frankie had moved to Boise, the branch continued the tradition, affectionately calling them “Frankie Lunches.”

When they moved to Boise, Frankie stopped making porcelain dolls. She sold her kilns and began dedicating her time to scrapbooking. And for the next twenty years, as her children served missions, graduated college, got married, launched careers, and had children of their own, she masterfully captured all of it in dozens and dozens of beautiful scrapbooks.

Frankie was a fantastic mother, grandmother and great-grandmother. She was always there when her children and grandchildren needed her at tryouts, recitals, practices, lessons, competitions and all of life’s big events. She celebrated their successes and supported them in their goals and dreams. And she comforted them in their failures. She loved her family, and they loved her.

Frankie continued her scrapbooking efforts as best she could these last few years, even with her physical ailments, after moving to St. George, Utah. She once claimed that the person who dies with the most craft supplies wins. By that, and by many other measures, she truly is the winner.

A viewing will be held Friday, Nov. 29, from 6-7:30 p.m. at the Antelope Hills LDS chapel, 590 Antelope Drive, Layton, Utah. Interment will take place the following morning in the Ogden City Cemetery.

Arrangements are made under the direction of Hughes Mortuary, 1037 E. 700 South St. George, Utah, (435) 674-5000. In lieu of flowers, donations may be made to Lewy Body Dementia Association (LBDA.org) or American Diabetes Association (diabetes.org).