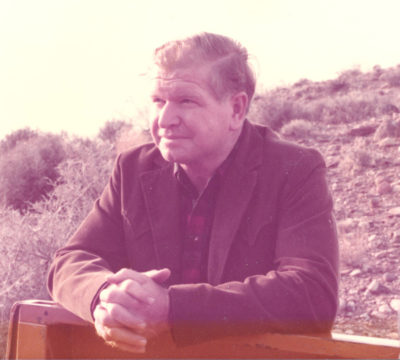 Born Aug. 22, 1926, in Caddo, Oklahoma to Eugene and Irma Lobb, and the first of eight children, his early years were shaped by hard work at his dad’s sawmill, a love of learning, and playing guitar and fiddle at country dances.

Part of the “greatest generation” of WWII, he was drafted into the Army during his senior year of high school and served honorably in the Philippines and Japan in 1945-46.

After the war he became a skilled heavy equipment operating engineer, building roads, railroads and dams. His work led him to Arizona, where he met Clara. They married in 1961 and later moved to the St. George area while he was working on the Virgin River Gorge project. He was one of two men who did the dangerous pioneering work on bulldozers and was the first man on and last man off the entire job.

He retired after nine years at the Nevada Test Site but stayed active, enjoying his family and friends and walks in the desert with his dogs.

A hard worker, brilliant writer and storyteller with an incredible memory and keen mind, his first love was playing music on bandstands throughout the southwest, enjoying seeing people dance and have a good time.

Service to be held Saturday, Nov. 23 at 11 a.m. at Metcalf Mortuary. Viewing from 9- 10:30 a.m. Burial at Washington City Cemetery with military honors.

Special thanks to Deb, Cassie, Rose and Reuben of Zion’s Way Hospice.