ST. GEORGE — On a brisk St. George morning, veterans representing every branch of the military gathered to remember their fallen comrades and honor those who served their country during this year’s Veterans Day celebration.

Members from the American Legion Post 142, the Marine  Corps League Detachment 1270, Vietnam Veterans of America 961, the Knights of Columbus, the Patriot Guard Riders of Southern Utah and the Daughters of the American Revolution were joined by hundreds of local residents at SunRiver Veterans Honor Park.

With a military career that spanned more than 24 years, Veterans Day holds a special meaning to Herrington.

“It’s a day that you honor men and women who are willing to fight for their country,” Herrington said. “We honor those who appreciate American ideals.”

While all veterans deserve honor, Herrington said, it is the younger vets who served in Afganistan and Iraq that need focused attention. Many veterans’ organizations say it is this military community that have been overlooked when they came home.

“Everyone who fights should not be forgotten,” Herrington added.

With a military resume longer than his 30-minute speech, Herrington reflected on his career and his service during the Vietnam War.

After one year, Herrington had his gunsights set on flying a much bigger jet.

With a max takeoff weight of 488,000 pounds, Herrington was soon flying B-52 Stratofortress out of Guam to conduct bombing raids on North Vietnam.

In an interview prior to Veterans Day, Herrington reflected on the meaning of the day and on his service which included flying over enemy territory during Operation Lineback that saw several Stratofortress showdown by Russian made SA-2 surface-to-air missiles.

“These missiles were designed specifically in the Soviet Union to shoot down what I was flying,” Herrington said. “It is the tooth of the dragon. It was a 24-hour operation. You would take off, bomb, go back to Guam and get some sleep and eat, and do that day after day after day.”

When Herrington did have the occasion downtime he unwound at the officers club, but even there it was bittersweet, soon noticing friends from other B-52 Stratofortress bombers absent being shot down over north Vietnam.

“One of my roommates at the Air Force Academy was shot down and became a prisoner of war for more than seven years,” Herrington said. “To keep your focus it is all about the mission. If you acknowledged the loss of friends you acknowledged it could happen to you.”

Instead of dwelling on your mortality and vulnerability you threw yourself into your job, Merrington added.

Operation Linebacker was the codename of a U.S. Seventh Air Force and U.S. Navy Task Force 77 air interdiction bombing campaign conducted against North Vietnam from May 9 to Oct. 23, 1972.

“It was serious business,” Herrington said. “But, at the same time, you had to keep a sense of humor.”

For Herrington, life in A B-52 was much like the television show M.A.S.H.

“Although they were laughing and joking in the surgical room they were not dishonoring the soldiers they were operating on,” Herrington said. “They were trying to keep their minds in the right mood so that they could do their job. This is what you did as a B-52 crew. You did what you had to do so that you could do the job.”

After Herrington retired from the military he went to seminary and became a United Methodist minister. 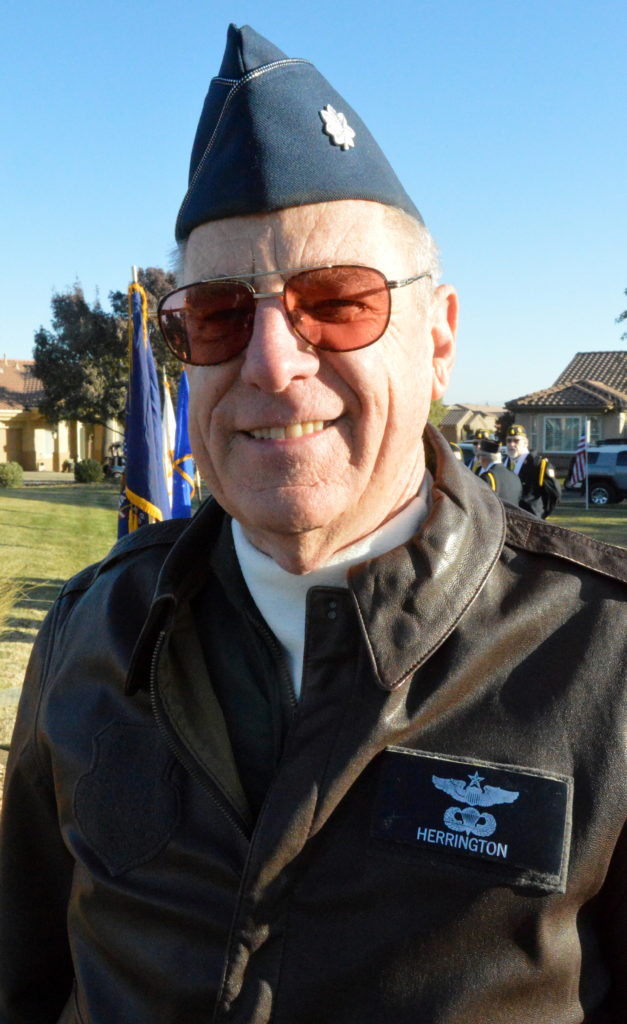 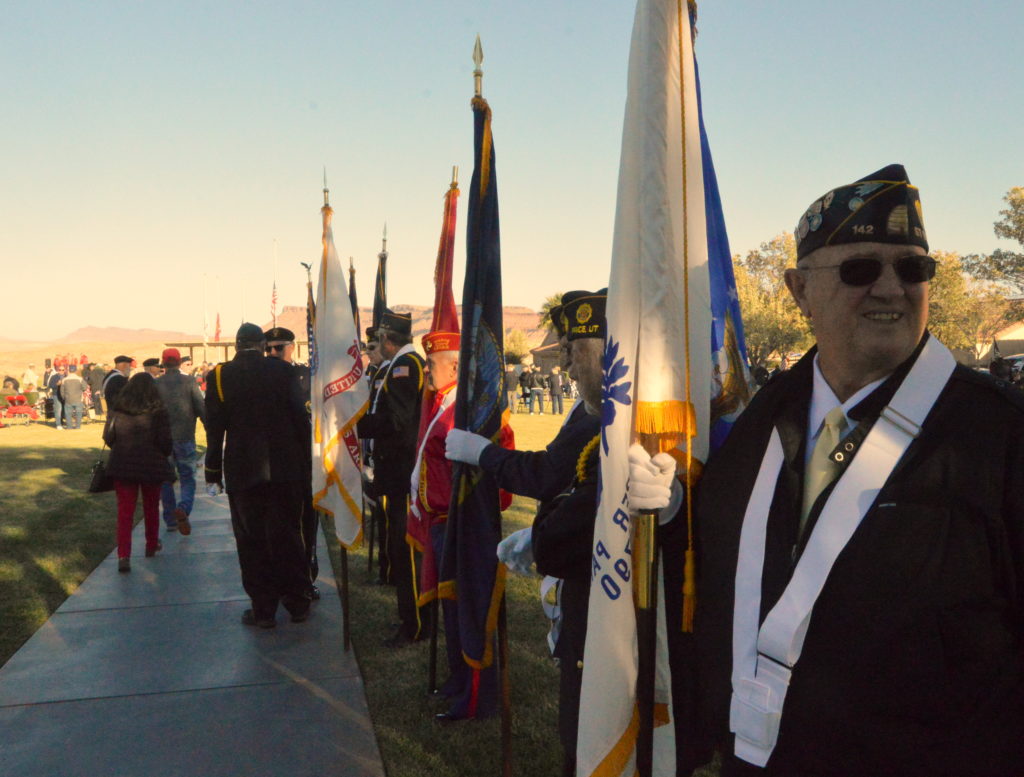 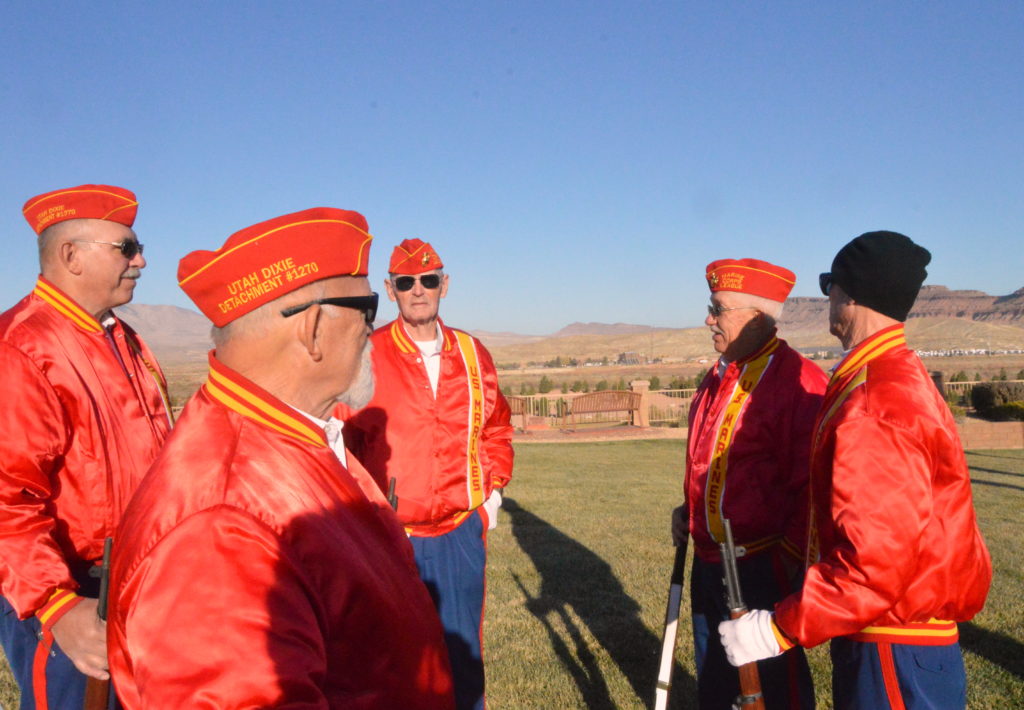 U.S. Marines with the Utah Dixie Detachment 1270 of the Marine Corps League honored all who have served in the military during Monday's Veterans Day celebration. St. George, Utah, Nov. 11, 2019 | Photo by David Louis, St. George News 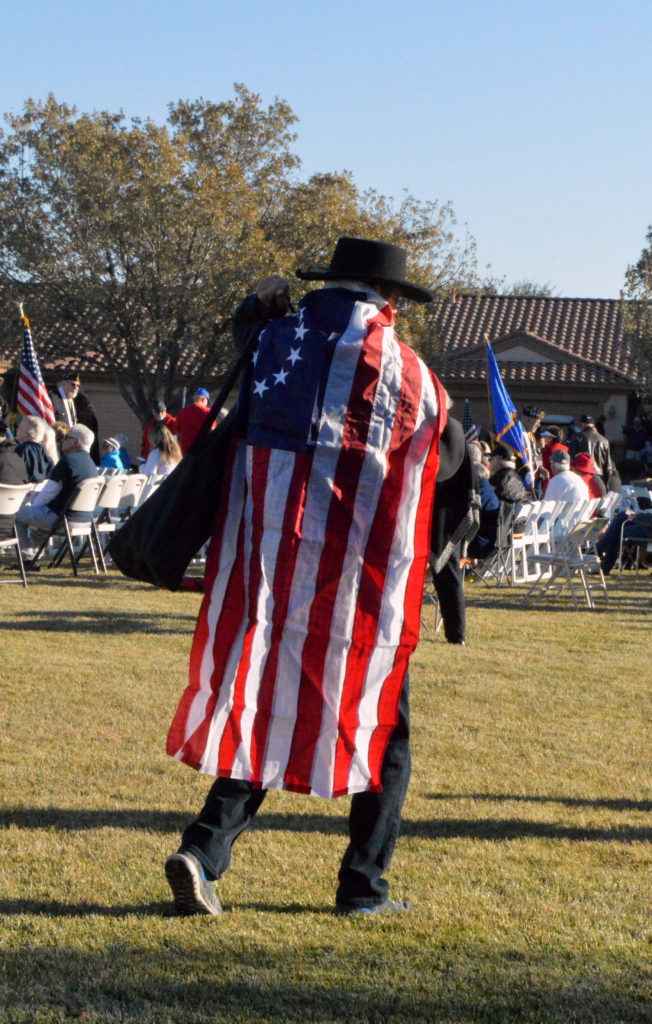 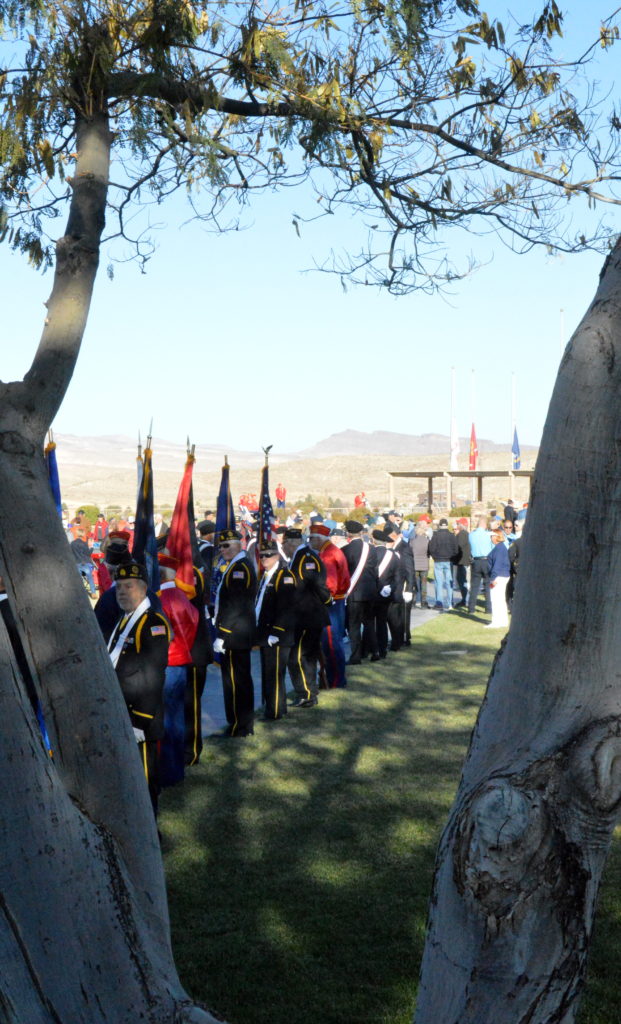 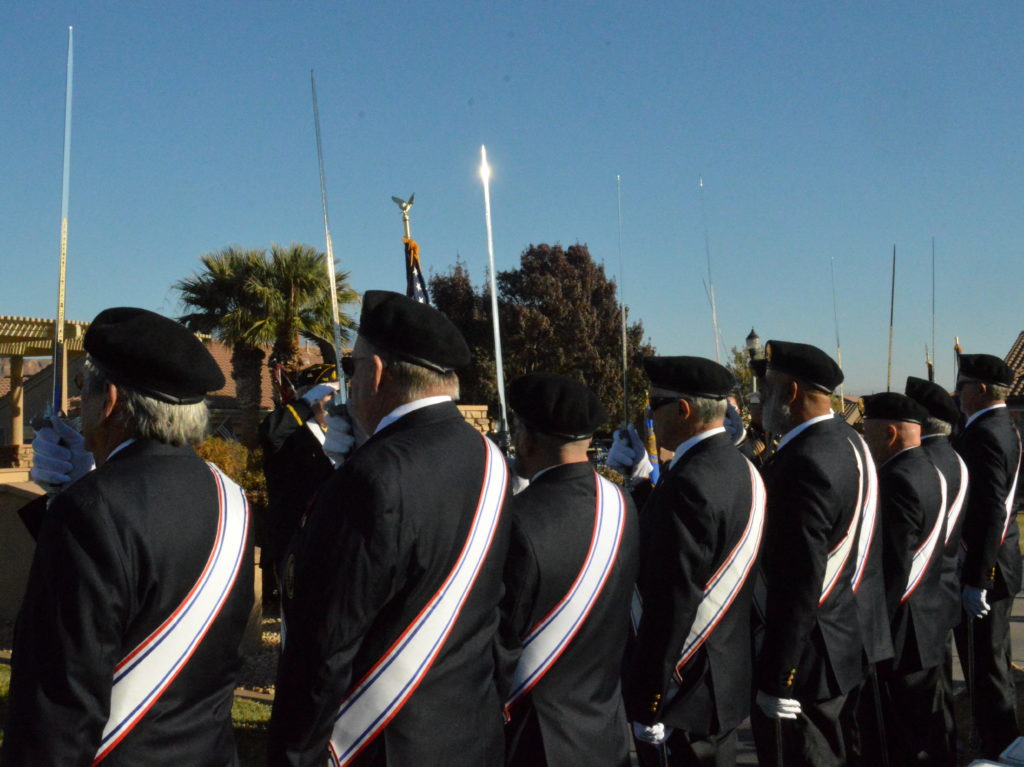 Members of the Knights of Columbus paid their respect as the stars and stripes was raised during Monday's Veterans Day celebration. St. George, Utah, Nov. 11, 2019 | Photo by David Louis, St. George News 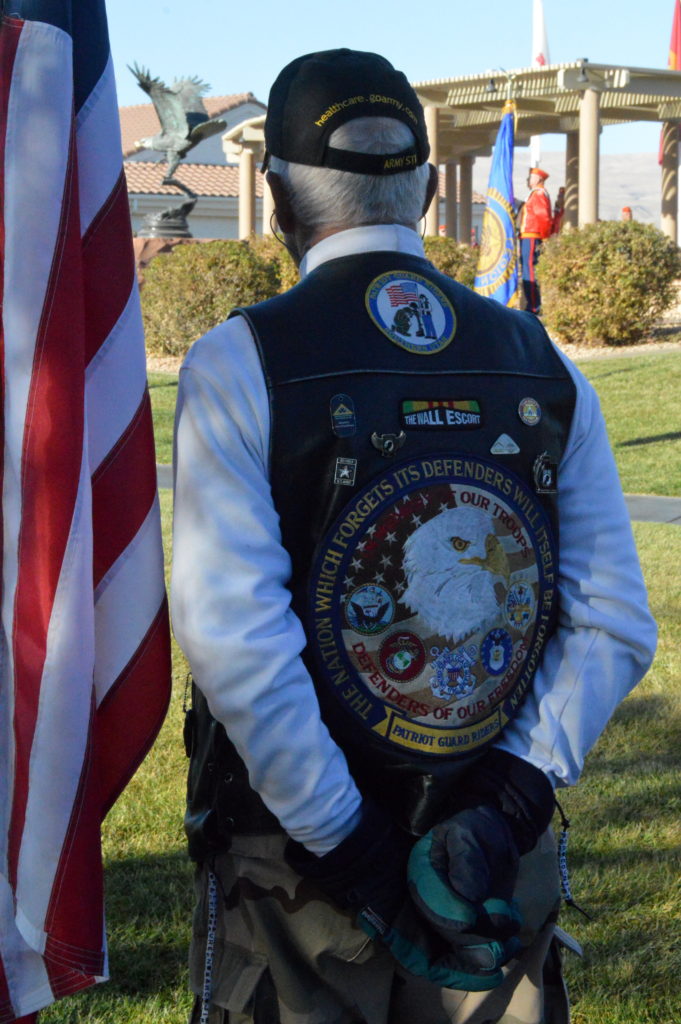 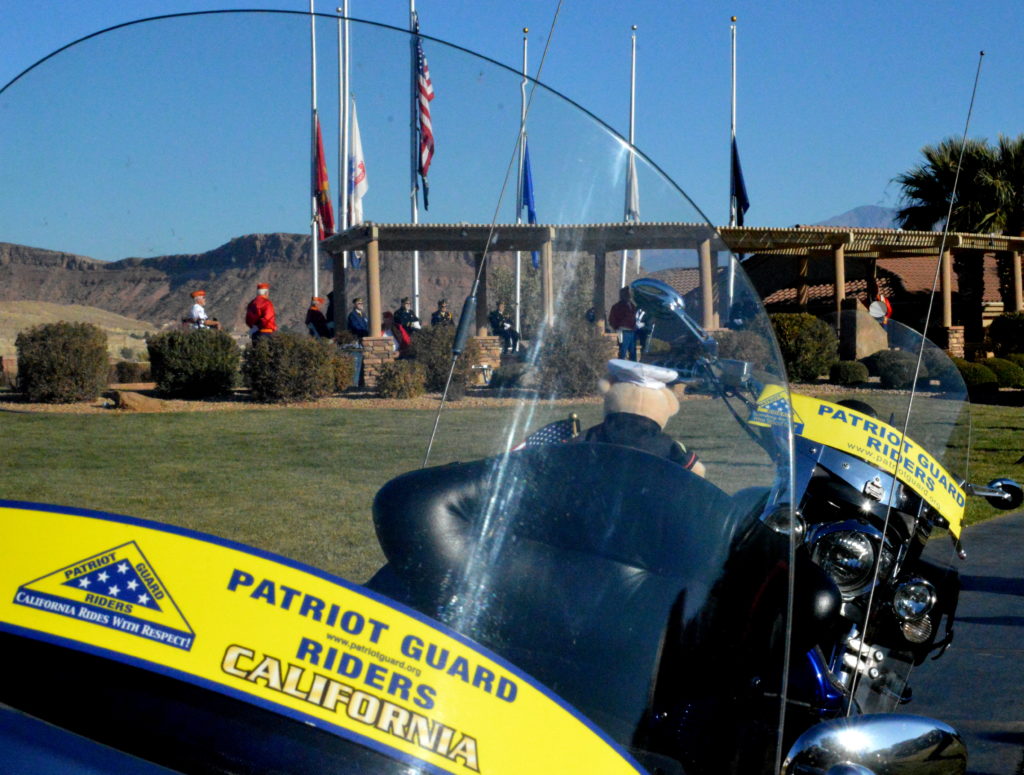 David Louis is a native of...well, everywhere. It’s hard to nail down a hometown for David, because when he was growing up, his father wanted to move somewhere else every two or three years. Since 1986, his primary residence has been Las Vegas, where he graduated from the University of Nevada. David has been a journalist collectively for more than 10 years, but as a jack-of-all-trades, he has also been a restaurant manager, warehouse foreman for a piping company, K-8 teacher and limousine driver. Along with a past life as a musician, David enjoys traveling on Amtrak – it’s all about the journey and not about the destination – cooking and painting. His greatest joys in life are his family, too numerous to list, and his cat Maxine.

Despite cancelation of events, Washington City family stands along street to honor veterans