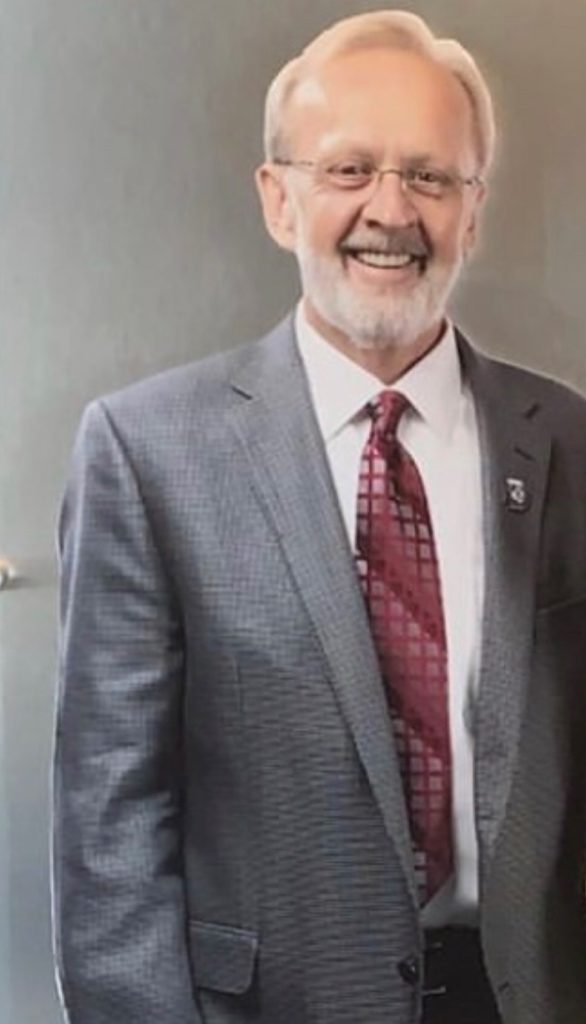 Lindsay spent his early childhood in Conrad, MT on his family’s farm. When he was a young boy, his family moved to Kearns, UT where he was raised and attended elementary, junior. and senior high-schools. During most of his adult life, Lindsay lived and worked in the Salt Lake Valley. In 2012, he and Laura “retired” in Hurricane, UT.

He spent his early working years as a “meat cutter,” a trade he enjoyed throughout his life. His first successful business was “Lindsay’s Meat and Seafood Co.” From that point forward Lindsay became a life-long entrepreneur. Starting and selling businesses were his passions. Among his many business successes were Paradise Optical, TruVision, and TruHearing (all of which he sold). He received several nominations for Utah’s entrepreneur of the year award and was highly esteemed by his colleagues.

After achieving tremendous success in his businesses, his main goal and purpose was “to give back,” which he achieved by serving as a trustee at Dixie State University (DSU), founding and financing “The Atwood Innovation Plaza,” volunteering as an instructor at DSU, and acting as a business mentor. He was a well-loved friend to many. His philanthropic efforts included donations to Intermountain Health Care and Switchpoint.

He was also a passionate advocate of education and provided scholarship funding to the Monsignor Moore Fund at Juan Diego Catholic High School in Salt Lake and the Edgardo Pitayo/Alan Atwood scholarship fund at DSU.

Lindsay’s favorite hobby was “making memories” with his family and friends, which included traveling with Laura and his children. His most recent adventure was in Cabo San Lucas, Mexico with Laura, their six adult children and spouses.

He loved the warm weather and beautiful views of Southern Utah and often drove his Rhino on the sand dunes near his home. For the past year, he spent much of his time at his and Laura’s condo on the beach in Mexico.

He is survived by his wife, Laura Atwood, of Hurricane, Utah; Shane (Stacy) Snyder, Michael (Sheri) Johnson, Stacey (John) Svitak, Chastity (David) Hunter, Miles Feller, and Alissa Ann Atwood as well as 12 grandchildren and three great-grandchildren. He is also survived by his three sisters: Moira (Robert) Wilding, Signa (Joe) Nicksic, and Colleen (Larry) Riley, and several nieces and nephews. He was preceded in death by his father, Alfred Terrel Atwood, and his mother, Ann Armour Atwood as well as his two brothers: Stanley Atwood and Alan Brent Atwood.

Friends and family are invited to sign Lindsay online guest book at www.spilsburymortuary.com