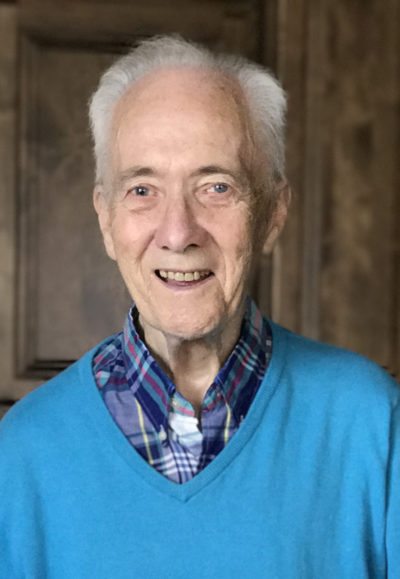 Heaven was blessed with a true Irish gentleman on Oct. 29, 2019, when George Hamilton Watson passed away peacefully from the effects of Parkinson’s disease, surrounded by his “Girls”—wife Chloë and daughters Sharon, Ruth, and Miriam.

George was born on Sept. 20, 1935, in Dublin, Ireland to George Hugh Watson and Gladys Elizabeth Hamilton. As a child growing up in Ireland, he loved scouting, cricket, rugby, and seaside holidays with his mum, dad, and big sister Eva. Following his graduation from The High School, Dublin, George studied Geotechnical Engineering at Trinity College where he earned his PhD in 1962 and later an honorary Doctor of Science in 1981.

In 1954, George won a blind date with Chloë in a card game—and apparently their date went well! Their girls loved to hear how he cycled ten miles one way each Sunday to visit her. They were married six years later and would have celebrated their 60th anniversary next year. George and Chloë moved to St George four years ago, after having previously resided in Stockton-on-Tees, England; Winnipeg and Calgary, Canada; and Naperville, IL—their home for 41 years.

A million miler on two different airlines, George travelled throughout the world during his career. From designing natural gas pipelines in Asia and the Middle East, to building structures on permafrost in Siberia, to constructing ice islands for oil exploration in the Arctic, George enjoyed working with others and putting his engineering knowledge to use. He could build you a hydroelectric dam, but couldn’t hammer a nail in straight! George retired in 1998 after 24 years with Amoco/BP.

One of his greatest joys was working together with Chloë in LDS temples. They served as President and Matron of the Chicago Temple (2000-2004) and later as missionaries in the London, England Temple—the same temple where they had been sealed in 1961. A member of The Church of Jesus Christ of Latter-day Saints since 1959, George shared his testimony of the Savior not only through his words but also in the way he lived his life.

George was a living example of his mantra, “People matter, things don’t.” His wisdom, compassion and humor were evident to all who knew him. He touched the lives of countless people around the world and will be missed greatly.

In lieu of flowers, you are invited to contribute to The Church of Jesus Christ of Latter-day Saints’ General Missionary Fund.