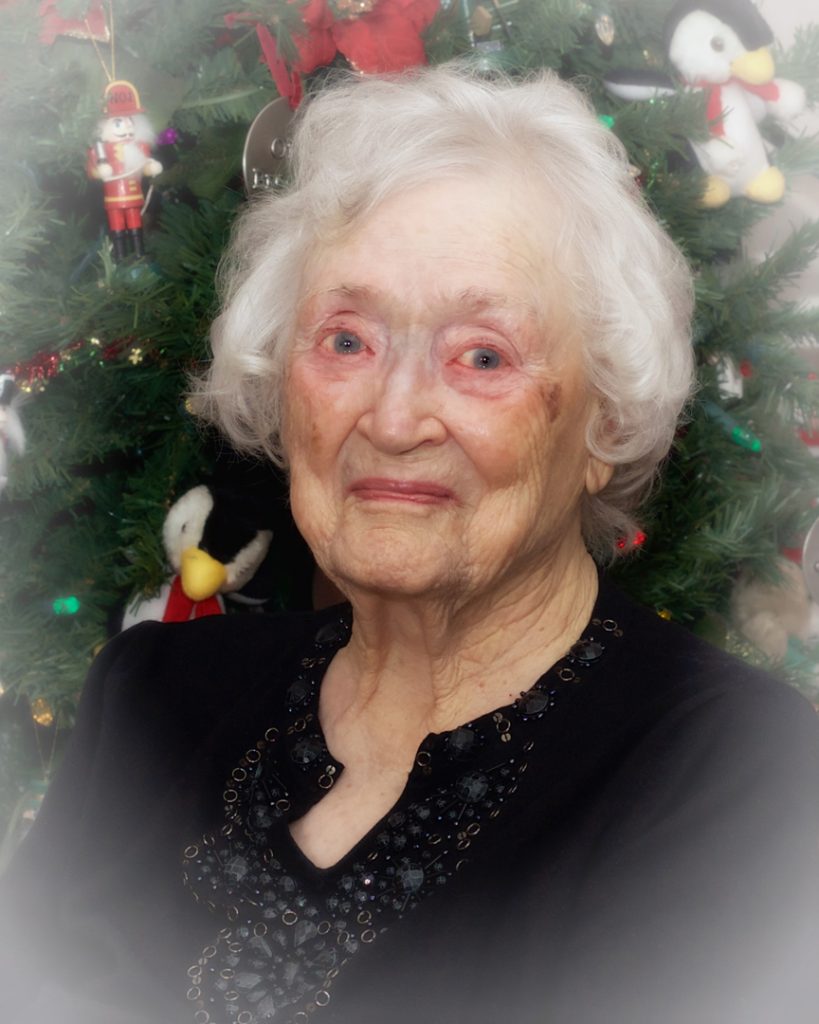 At 101, Emma Katherine Dougherty Blackham left this world Sept. 17, 2019, at home surrounded by her family. Until the last month of her life, Katy was a lifelong reader and learner who enjoyed reading several books at a time, watching the Utah Jazz and answering every single question on Jeopardy.

Katy was born July 17, 1918, to William Allen Dougherty and Emma Jane Crane Dougherty on the family’s Bar X ranch outside Hereford, Texas, living there until her family bought a new ranch, the K-D, north of Clovis, New Mexico. After skipping two grades and graduating from high school at 15, Katy then earned her associate degree from the College of Eastern New Mexico, followed by receiving her Bachelors from the University of Missouri.

After receiving her degree, Katy returned to New Mexico, becoming editor of the weekly newspaper in Portales. In 1940 she left the paper to work for the Selective Service. Not long after, she met Bard Blackham, the handsome young man from Utah, who she married in Clovis, New Mexico, on May 17, 1941.

Bard’s employments with the Soils Conservation Service required they relocate to Carlsbad, New Mexico; however, shortly after World War II, the young couple moved to Moroni, Utah, to work with the Blackham family’s dairy business. While in Moroni, Katy taught business at North Sanpete High School.

Bard’s involvement in the dairy business was a short hiatus from government service, returning to the SCS and taking a position in Nephi, Utah, allowing them to still live close to family. Katy was quickly hired as the Juab High School’s business teacher and kept that position until their daughter Kathryn was born. Sadly, two years later, they lost a second daughter at birth.

In 1955, Bard was transferred to Beaver, Utah, where the family lived for only 2 ½ years. Katy became involved in the church and community very quickly, saying often she loved Beaver and they had some of the best people she’d ever met. It was during this period Katy joined the LDS church and their family was sealed in the Manti temple.

A wonderfully monumental event occurred on February 11, 1958, when the SCS transferred Bard again and the family moved to St. George, Utah. The Blackhams had landed in their forever home, and just a year later, their family became complete with the birth of their son, Mark.

With St. George being a small town of only 5,000, there were lots of opportunities for Katy to become involved in the community. She was quickly invited to join several literary clubs and became a significant voice in all aspects of our beautiful little town. In addition to serving in the church until her health no longer permitted it, Katy was involved in the lady Lions, the PTA – on a local and state level, the Ladies Republican party – also on the local and state levels. She also helped promote literacy, education, and the arts in St. George by serving on the original Symphony Series board, the original Miss Washington County scholarship pageant, the Washington County library board, and the Dixie College advisory board.

Katy took a teaching position at Dixie High School in 1962, retiring in 1980. She became an institution at Dixie – as the chair of the business department and the pep club adviser, Katy had a lasting impact on the lives of hundreds of students who she loved. calling them “her boys and girls” – many of whom made a point to come see her throughout the years.

Upon retirement, Katy and Bard lived a quiet and full life, serving in the church, traveling, and spending precious time with each other and family. When Bard passed away in 2001, Katy began her genealogy work in earnest – a project that still has many boxes of work to be completed. Katy made her family’s life a joy as they were able to make their home with her during the last decade of her life.

Katy was preceded in death by her parents, siblings, husband, and daughter. She is survived by her son Mark (Michelle) Blackham – Glendale, California; daughter Kathryn (Greg) Leany; her two grandsons Phillip and Jordan, and her great-grandson Liam. A special thanks to those who cared for her the last year of her life: Danielle Harris, Suzie Harrington, and the angels from Applegate Hospice.

Burial and graveside service will be in Moroni, Utah, on Tuesday, Sept. 24 at 11 a.m.

Arrangements are under the direction of Spilsbury Mortuary, 435-673-2454. Friends and family are invited to sign Katy’s online guestbook at www.spilsburymortuary.com.

Canyon View Falcons to open 3A football playoffs at home vs. Richfield; other 2A/1A action