By a 4-1 vote, the council members approved a resolution that recognizes the historic Native American heritage behind Cedar High School’s use of the symbol from 1942-2019 and indicates that volunteers will be responsible for giving the tank a fresh coat of paint at least once every 10 years.

The resolution, which is nonbinding, was worked out after the City Council’s July 17 work meeting, which council member Terri Hartley missed due to her flight being delayed in Salt Lake City.

Although absent the day of the work meeting, Hartley had suggested adding language regarding a second water tank on the north end of town, which is adorned with the school colors and mascot of Canyon View High School. Her resolution and fellow council member Paul Cozzens’ original one, with modifications, were later blended into one document by city attorney Tyler Romeril.

The combined resolution was essentially the same version that was approved Wednesday night, with a single change in the wording: Instead of citing a “special interest group, led by Paul Cozzens,” it now says that “Paul Cozzens and other interested parties” will be responsible for aesthetic maintenance and upkeep of the Leigh Hill water tank.

“I’m not a leader of any special interest group,” Cozzens clarified during the meeting. “I’d like to remove that language.”

The only dissenting vote on the matter came from Councilman Scott Phillips, who said he was still not comfortable with it.

“I still believe this is a school district issue,” he said.

Cozzens then responded, saying that, for him, the issue extends far beyond Cedar City.

“This is, to me, is a line in the sand for me personally,” he said. “I want to maintain (that) this is a proud tradition for 77 years, but the bigger thing for me is, I think we need to teach our children that we don’t have to be offended at everything, and I think that’s a disease we have in our country right now.”

Despite his dissenting vote, Phillips did add words of support.

“I appreciate all the work that Councilman Cozzens has put into this, and the other council members, and the amount of compromise that people seem to have reached and trying to come to some agreement,” he said, adding that his nay vote “in no way means that I am not supportive of what this community stands for, and the traditions.”

“I’ve indicated already that I will support whatever decision is made here because I think it’s important as a democracy that we agree to disagree at times,” Phillips said. “Whatever the outcome is, I will be fully supportive, and I will stand behind the decision of this council.”

Prior to the water tank vote, Hartley and Cozzens both took the opportunity to make public what they said was a mistake made the night of July 17 when some members talked about the water tank issue in a group text, which Hartley acknowledged was technically a violation of the state’s Open and Public Meetings Act.

On July 17, Hartley texted her fellow four council members a photo of the screen at the airport showing scheduled arrivals and departures, saying she wouldn’t be able to make it to the meeting.

“My flight was delayed and I jumped on a text thread that was on my phone that had all five council members and sent a copy of my delays (and said) ‘I’m sorry, I’m not going to be able to make it to the meeting tonight,’” Hartley explained during the meeting. “Later that evening, another council member got in on there after I had returned from Salt Lake and started talking about the Redmen issue. Several of us commented on the Redmen issue, and I feel like I need to disclose that we technically violated the open public meeting act in discussing that. There was five of us in the text thread; three of us commented on it.”

Hartley said she talked with the city attorney the next day about the texts.

“He told me technically, we weren’t trying to coerce the vote or do anything,” she said. “We talked about what happened. They were briefing me on what had happened at the meeting.”

Hartley told those gathered in council chambers Wednesday that she did text about her intentions on the second resolution regarding the water tank at the north end of town near Canyon View.

“And so, I do want to apologize. I still have the text messages on my phone. Anybody that wants to come in and look at them, you’re welcome to read the whole message.”

Hartley then read aloud each of the texts in the thread, making them officially part of the public record.

Hartley said the five-member group text thread she’d resumed on her phone the night of July 17 had originally been initiated by Cozzens.

Cozzens said the original text thread had been sent in February 2018, warning his fellow council members about an “irate” man who was so upset about an issue regarding a business license fee that he called Cozzens’ wife late at night and berated her until she was in tears.

Cozzens said he was merely giving his fellow council members a heads-up, in case the man decided to contact them also. He also noted the situation was not an active agenda item that was voted upon.

Even so, Hartley went ahead and also read aloud all of the messages that were included in that discussion regarding the irate customer.

Cozzens, who did not participate in the group chat on July 17 but did provide screenshots of the discussion in question, read the following prepared statement Wednesday night:

Under advice of my personal legal counsel, I need to bring something up that happened after last council meeting two weeks ago. I was unknowingly included in a group text between all five of us as council members. This communication evolved into a discussion regarding the Redmen water tank issue which we vote on tonight. I did not participate in that discussion because I wanted to make sure that I was not violating the open and public meeting act by addressing issues that are pending before the city when there is a quorum present.  We need to remember that texting is a form of electronic communication and if it is being sent about a matter over which the public body or specific body has jurisdiction or advisory power, then it is considered a meeting, and these discussions should only take place in an open meeting.  The city attorney and staff have trained us multiple times regarding this issue and always emphasize the severity of breaches of this rule. We do not allow discussions of voting outcomes in a secret quorum setting, even through text messaging. Our open meeting laws protect our constitutional republic and our ability to hold our public officials accountable. This is why my legal counsel and myself have decided that I need to clear my name publicly and I want everyone to know that I am a strong advocate of transparency and will always do my best to protect this city.

After the meeting, Cozzens told Cedar City News he had no problem with Hartley’s initial text regarding the airline delay, as he himself had done a similar thing more than a year ago.

“The problem was that they were discussing an active item that was on the agenda to be voted on, and that simply is illegal and not appropriate,” he said.

Cozzens also said he intends to make a formal Government Records Access and Management Act (GRAMA) request asking for copies of any electronic communications between any three or more city council members in order to confirm whether this was an isolated incident.

See the screenshots of the July 17 group text thread in the photo gallery below. 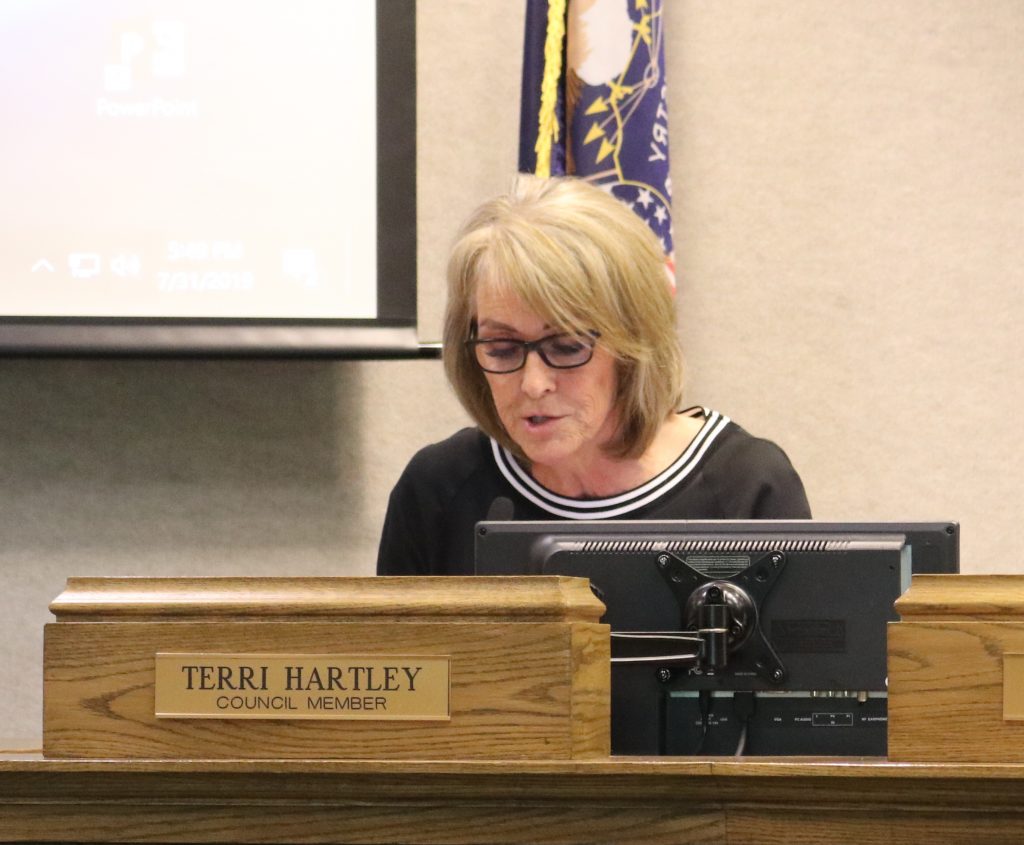 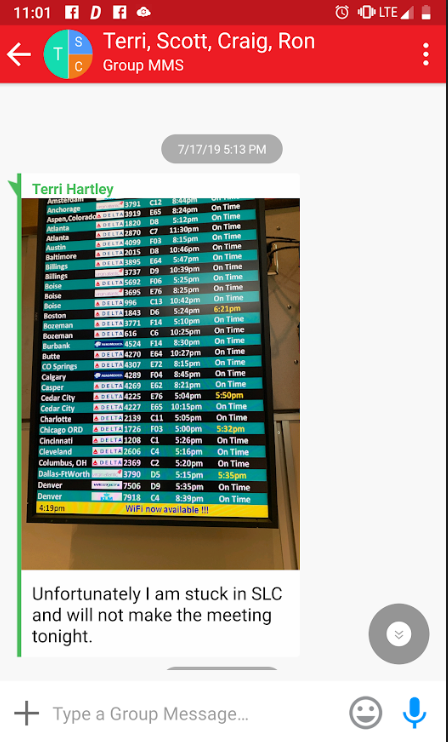 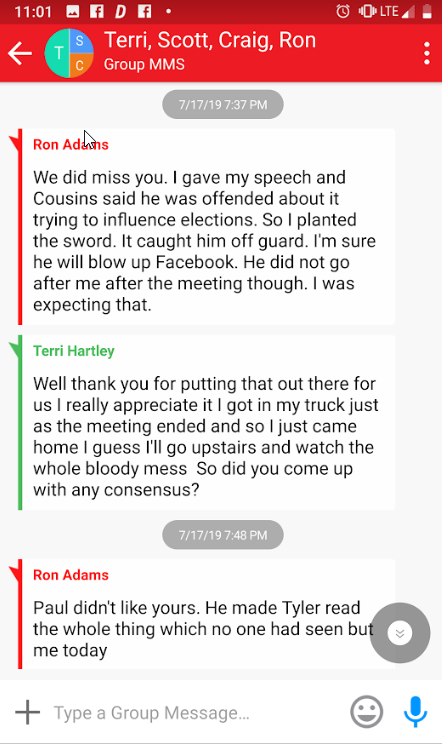 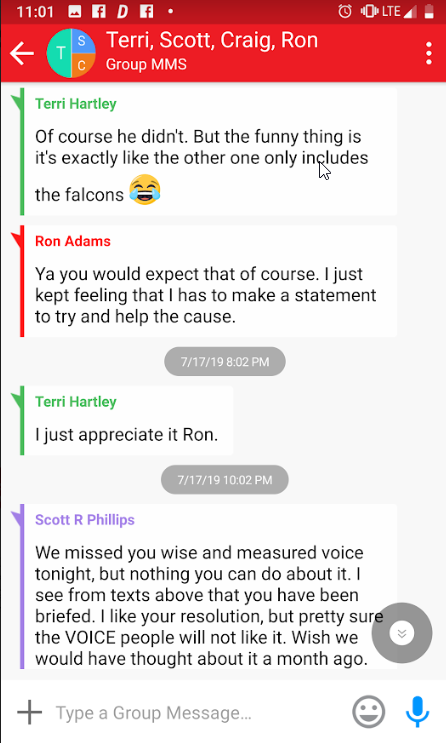 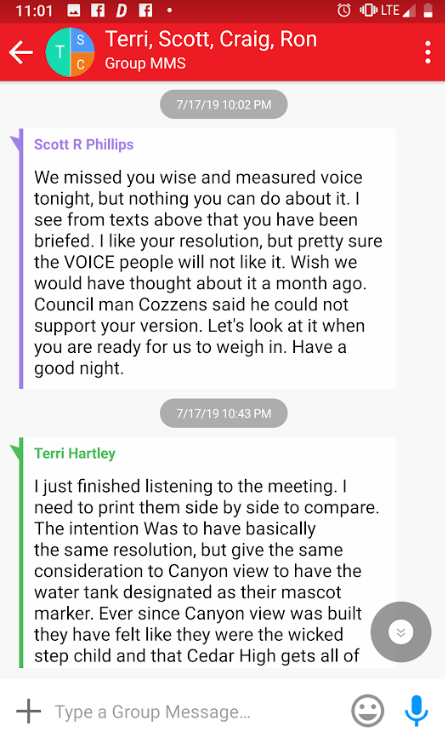 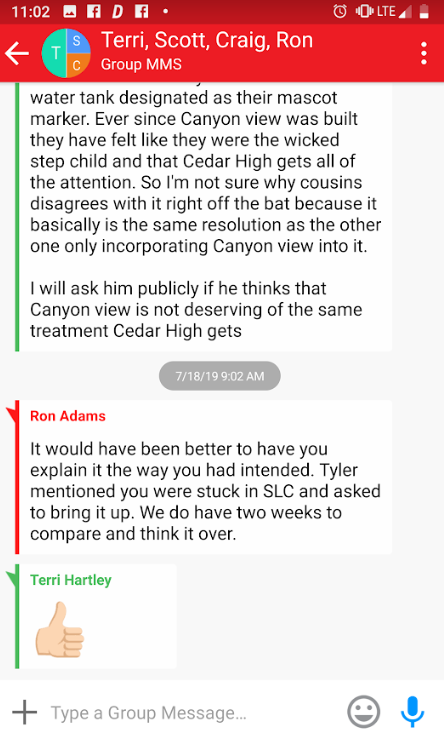 Body discovered inside vehicle on trail near Dinosaur Crossing