Each of the candidates was given three minutes to make a short statement about their reasons for running, after which the candidates went back to their campaign tables and spent time visiting with the public and answering questions as the meet-and-greet session resumed. Approximately 150 people attended the event, which was held in the Gilbert Great Hall of the Hunter Conference Center.

Mail-in ballots for the primary election have already started appearing in the mailboxes of registered voters throughout the city. Voters have until Aug. 13 to submit them, with mailed ballots needing to be postmarked by Aug. 12. Voters can mark their choices for up to three candidates on the primary ballot, with the top six advancing to the general election in November.

Although a total of 13 names appear on the primary ballot, former candidate Stephen Gwin has officially withdrawn from the race, leaving a dozen candidates vying for the three open seats on the five-member Cedar City Council. Incumbents Terri Hartley and Craig Isom are running for re-election, but incumbent Paul Cozzens, who successfully ran for a seat on the Iron County Commission last year, is not.

The only two candidates who did not appear at Monday’s event were Stephanie Flores and Carrissa Smith.

Following are summaries of the statements given by each of the candidates in attendance at Monday’s event, in the order that they were given, which was randomly assigned.

Strand has lived in Cedar City for 22 years and is a graduate of Southern Utah University with a master’s degree in public administration.

“I just thought about three words that I’d like to elaborate on a little bit,” Strand said. “And those three words are partnerships, planning and progression.”

Planning, he said, needs to extend beyond the short term.

“Thinking more than just tomorrow and next year, we should be thinking 10-20 years out, so we can be on the offensive,” he said. “We need to get everybody there and thinking about the future.”

Parry, who grew up in Cedar City, talked about her plans to work toward helping the city.

“I hope that we as a city and community can start investing in our downtown and bring it back to life,” she said, “that the parks our kids play in and where we have our community gatherings are valued the same as the golf course, and that we start uplifting our local businesses and acknowledge how much they add to our city.”

“Now take a moment and ask yourself, what is our leadership in doing?” she said. “Because we’re at a breaking point here. It is time to start electing people who are capable of knowing that these problems exist, to be honest about the causes behind them and be realistic about what it will take to fix them.”

“I won’t make any promises I can’t keep,” Parry said. “What I will guarantee you, I will listen to you and I will put myself in your shoes and I will make your quality of life my top priority.”

“This is your chance to be heard. Your vote is your voice.”

Hartley, who said she recently retired as a vice president at Wells Fargo Bank after a 42-year career in business banking, reflected on her work over the past four years as a member of the Cedar City Council.

“As a City Council member, you spend most of your time managing the financials of the city,” she said. “You need somebody who has extensive proven financial experience and leadership. You need someone who completely understands why it’s management of financial resources, a thorough understanding of government accounting and, most important, transparent, proactive communication.

“All of this, and during my term on council, we have not increased a single tax,” she noted. “I’m a taxpayer too and I always feel we will continue to be extremely careful stewards of your hard-earned money. My banking career reflects this and with your vote, I’ll continue to do this for my beautiful hometown that I love so much.”

Short, a longtime self-employed small business owner and a 15-year resident of Cedar City, told those in the audience to not be suspicious of the fact he is originally from California.

Short said his 35 years as an entrepreneur have taught him the value of spending money wisely.

“It’s very important to understand that there’s no such thing as government money. There’s only the people’s money. Every dollar of taxes came out of someone’s pocket. I want to leave as many dollars in everybody’s pocket as I possibly can.”

Short also cited his skills in working with others. 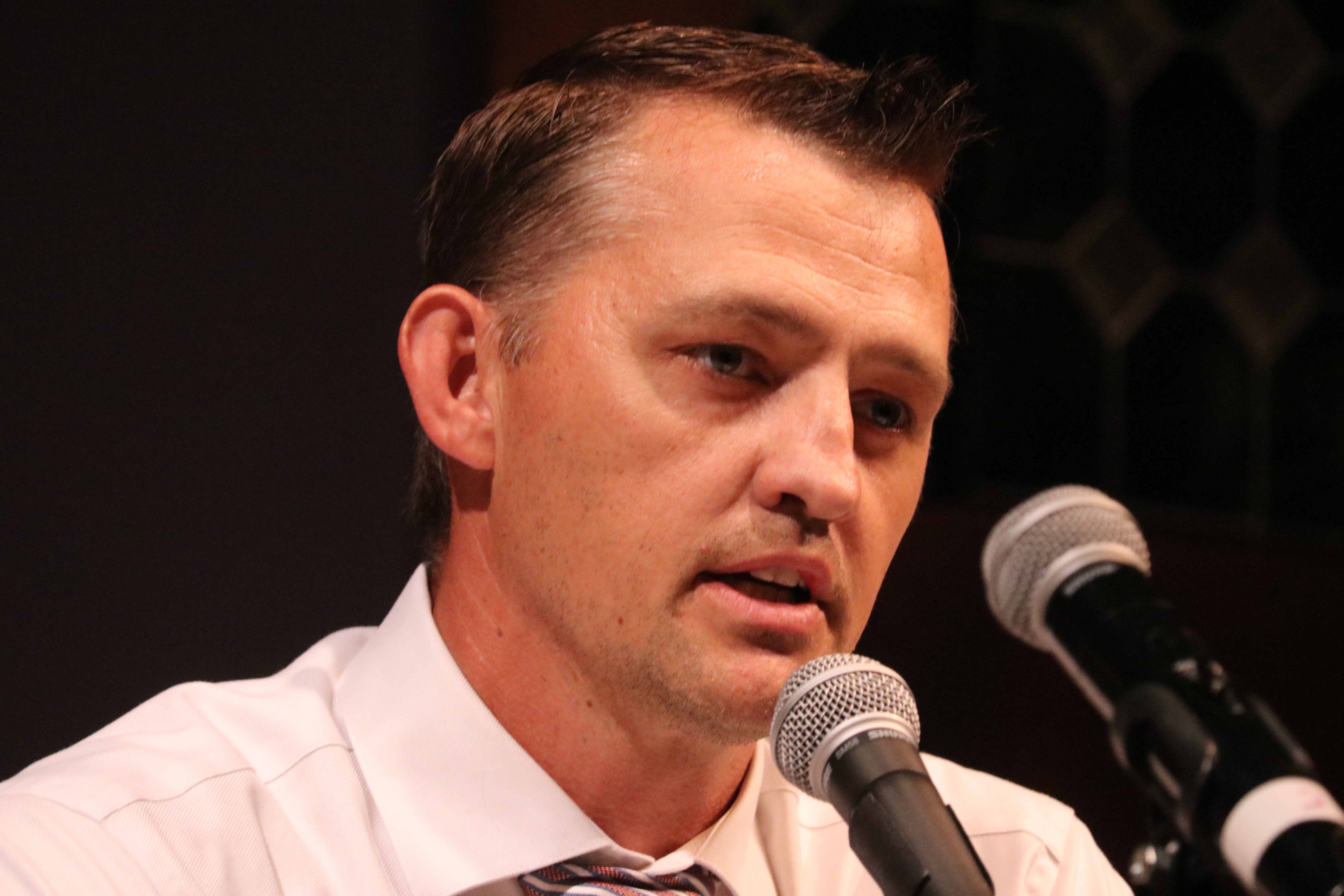 Hahn is a 14-year resident of Iron County who moved from Enoch to Cedar City four years ago. He operates Hahn Electrical Services, overseeing a staff of 10.

“We need controlled growth in a way that allows for good traffic flow down our streets so we don’t end up like St. George with the traffic congestion on St. George Boulevard and Bluff Street. That’s exactly what’s going to happen with 200 North and Main Street (in Cedar City) if we don’t plan ahead. We need to make sure that we expand the roadways so that we can move traffic around smoothly.”

Hahn also cited the economic benefits of such growth.

“We need to make sure that we are planning for this growth so that we can bring in new jobs,” he said, saying that newly created jobs would also result in higher wages.

“I know this because that’s how I decide to pay my employees, I pay them by what I feel that they’re worth to me. If I can’t find employees that will work for $7 an hour, then what do I do? I pay them more.

Dahlin, a resident of Cedar City since 1993, previously served on the Iron County Planning Commission for nine years, including six years as chairman.

“I came to learn that infrastructure is primary for managed growth,” he said.

“I’m running for city council because I believe I have experience here in Cedar City,” Dahlin said as he finished his remarks. “I believe my experience is valid and I’m willing to help.”

Isom, who is seeking a second four-year term on the Cedar City Council, cited his decades of business experience.

“I’ve got 40 years of business experience, 26 and a half of which was served in a large international CPA firm, in the small business division of that firm,” Isom said. “And now I do a small business counseling. I think that I’m uniquely qualified to help us create an environment here in Cedar City that will help entrepreneurship flourish, help businesses thrive, and help increase wages and salaries.”

Isom noted that Iron County is fifth from the bottom of Utah’s statewide rankings in terms of per capita income and median household income.

“With the housing prices being such as they are in our community, we’ve got to close that gap and we’ve got to improve the salaries that are being paid to people,” he said. “We need to create jobs that will do that.”

“We live in a great place. I love Cedar City. I’m grateful to be a member of this community,” Isom said. “I hope you’ll vote in the primary and do what you’ve done tonight: support the process.”

Penrod, a Cedar City resident since 2002, graduated from Southern Utah University in 2007. He’s been a small business owner for the past 15 years, having started an improv troupe that performs comedy shows weekly.

“When we do improvisation, we make stuff up on stage in front of a group of people,” he explained as he then outlined the four main rules of improv and explained how they also apply to civic service and everyday life.

“The first rule is always ‘yes, and,’” he said. “What that means is to accept the situation that is being handed to you at the time and then to add to it.”

The other three rules, he said, are to commit fully, leave your ego at the door and to show respect.

“The last one is respect. I think this is really important,” he said. “Respect goes a long way in being successful and making relationships and building relationships. Part of being a city (council member) is being able to build strong relationships across many different barriers.”

Melling, an estate planning attorney and father of three young children, is running under the campaign slogan “Old name, new vision,” which he says is in reference to his grandfather, Joe Melling, who served as Cedar City’s city manager for 23 years.

Melling started his remarks by sharing something he’s learned as an estate planner.

“Let me tell you a secret about planning, though. When you plan every little detail, your plan falls apart because things change. The world changes, technology changes, values change,” he said. “So instead, when I do estate plans, instead of planning out every little thing, which is where most estate plans go wrong, I plan for which rules are most important to follow. I set the rules, and then as assets change and families change, the rules still take hold and the plan works as intended.”

“With housing, I want to identify the rules that we have in place that are antiquated, that are driving home prices up,” he said. “Let’s find ways to change them in ways that still maintain safety and do the other things we want them to do while being able to lower costs.”

After noting that in most communities, nine out of 10 new jobs are created within existing local businesses, Melling said, “I’m excited to see when new high-paying jobs come to Cedar City, but if 90% of job growth is local, why are we not bending over backwards as a city to help find ways to help the businesses that are looking to expand, rather than putting roadblocks in front of them?”

“Finally with infrastructure, we need to reevaluate the rules,” he added. “How are we planning our infrastructure and which rules are maybe antiquated and don’t make sense in our ever-changing environment?”

A former high school teacher and coach, Oswald has managed the Quality Inn for 33 years. He also works part-time as an umpire.

“I officiate girls softball. I don’t cower down when I get the booing and yelling, because I’m used to that,” he said.

Oswald outlined a few of the main points of his platform.

“I want to bring dignity and protection to families and neighborhoods by enforcing ordinances such as parking and property use,” he said, adding that he also hopes to “bring higher paying jobs to town so that families can stay here and have the opportunity to purchase a home.”

Oswald also said he would “work to develop a master plan that will meet our short term and long term needs” and that he would also “encourage responsible economic growth, especially in the area of small business.”

“I also want to see improvement in the streets,” he added. “Too many potholes, and it keeps getting worse and worse every single year.”

“Cedar City is growing and we need to ensure it’s steady,” Oswald said. “A vote for me is a vote for the future of Cedar.”

Body discovered inside vehicle on trail near Dinosaur Crossing