ST. GEORGE — An SUV was destroyed in a blaze that spread through the vehicle within minutes, sending sparks into nearby trees just feet away from a home in St. George Friday afternoon.

At about 1 p.m. firefighters were dispatched to the fire on 900 South involving a Hyundai SUV, St. George Fire Capt. Josh Christiansen said.

While fire crews were en route, the blaze quickly spread from the SUV’s hood toward the back, sending sparks shooting upward into a nearby tree. Exploding rubber and other debris ignited two pine trees in the backyard of a residence on the other side of a retaining wall.

Fire crews arrived to find the vehicle fully engulfed in flames and initiated an aggressive attack on the burning trees first, which posed a fire threat to the nearby home. Less than a minute later, they turned their attention to the vehicle, and it was extinguished minutes later.

Firefighters continued dousing the car with water to cool the metal and to ensure any embers or smoldering materials were completely extinguished.

The man driving the SUV told fire investigators he was heading north on 900 East when he noticed the vehicle was leaking fluid that appeared to be dripping on the roadway.

Just as his attention returned to the front of the SUV, he noticed smoke and then flames drifting up from under the hood, he said, and he immediately pulled to the side of the road where he stopped and quickly exited the vehicle. In less than five minutes, the entire vehicle was fully engulfed in fire.

St. George Police officers cordoned off the street to allow firefighters to tend to the blaze while the Utah Department of Transportation’s Incident Management Team also responded and assisted.

Christiansen said a fuel leak of some kind could have started the blaze, but the exact cause was undetermined as of this report.

The vehicle was completely destroyed in the blaze and subsequently towed from the scene. No injuries were reported. 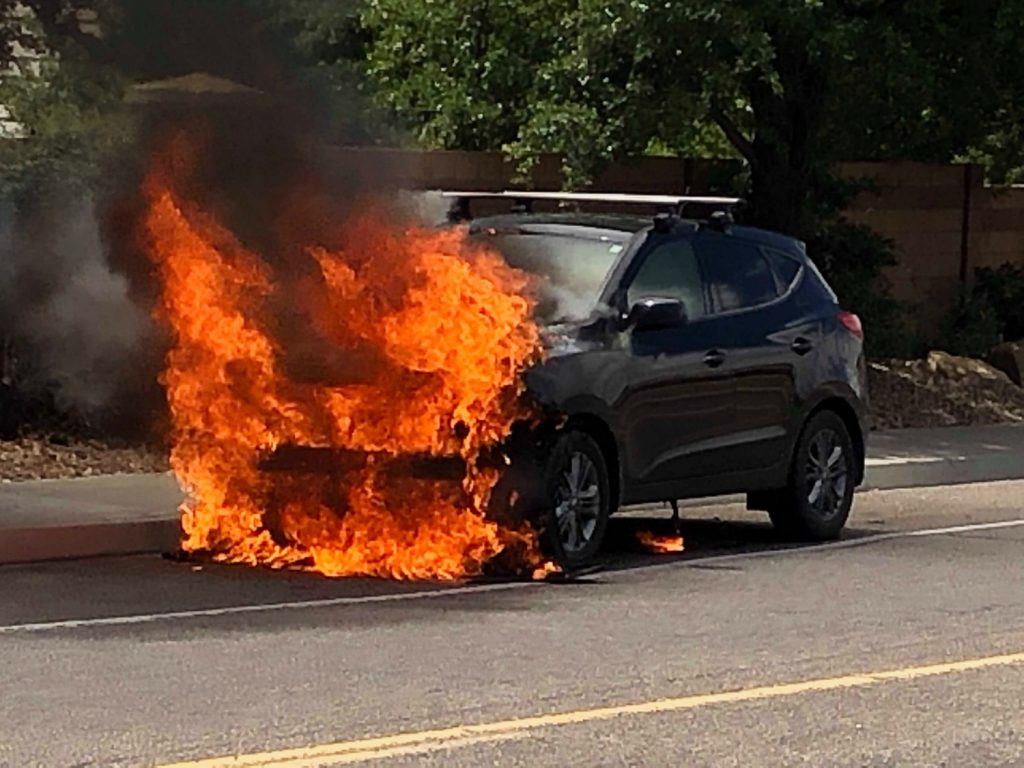 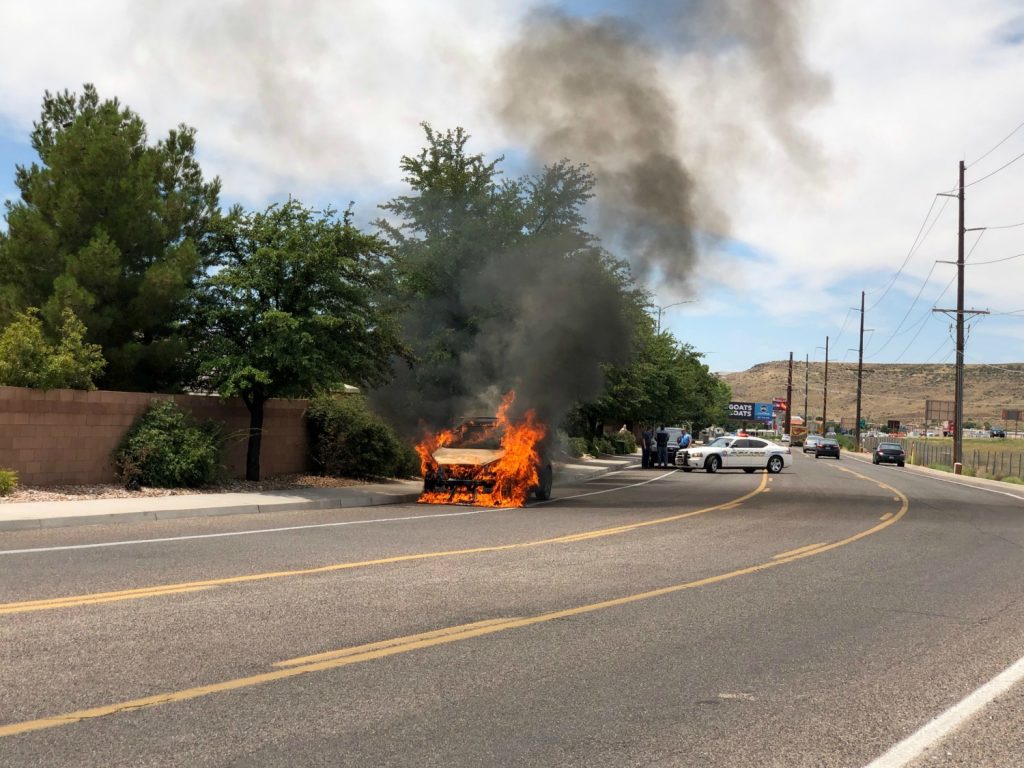 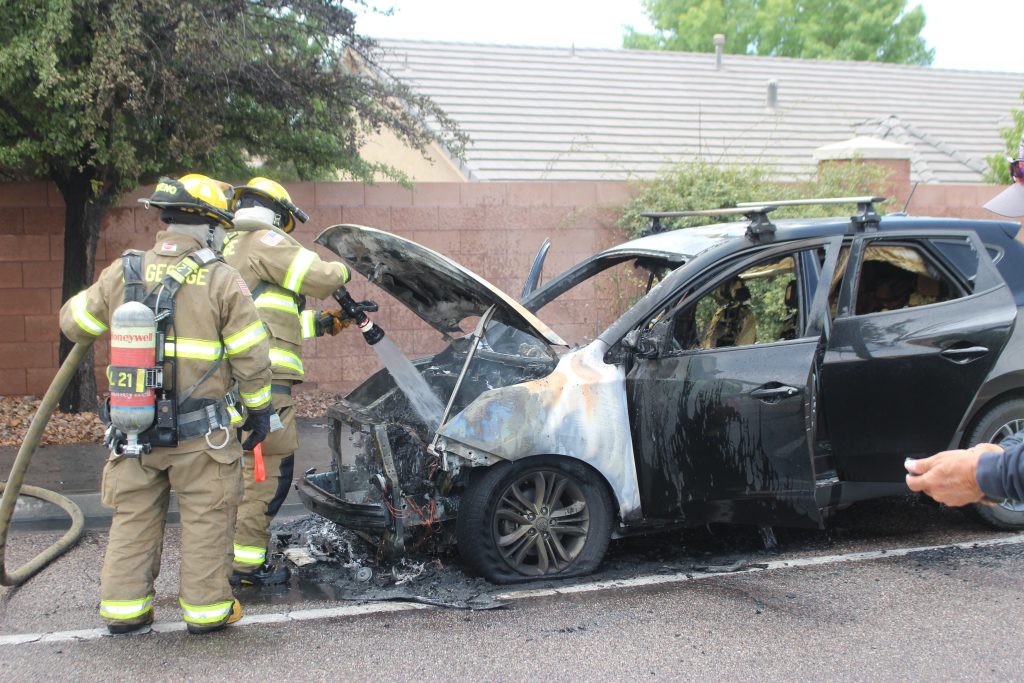 Firefighters douse an SUV with water to cool it down after a fire completely destroyed the vehicle on 900 East, St. George, Utah, July 5, 2019 | Photo by Cody Blowers, St. George News 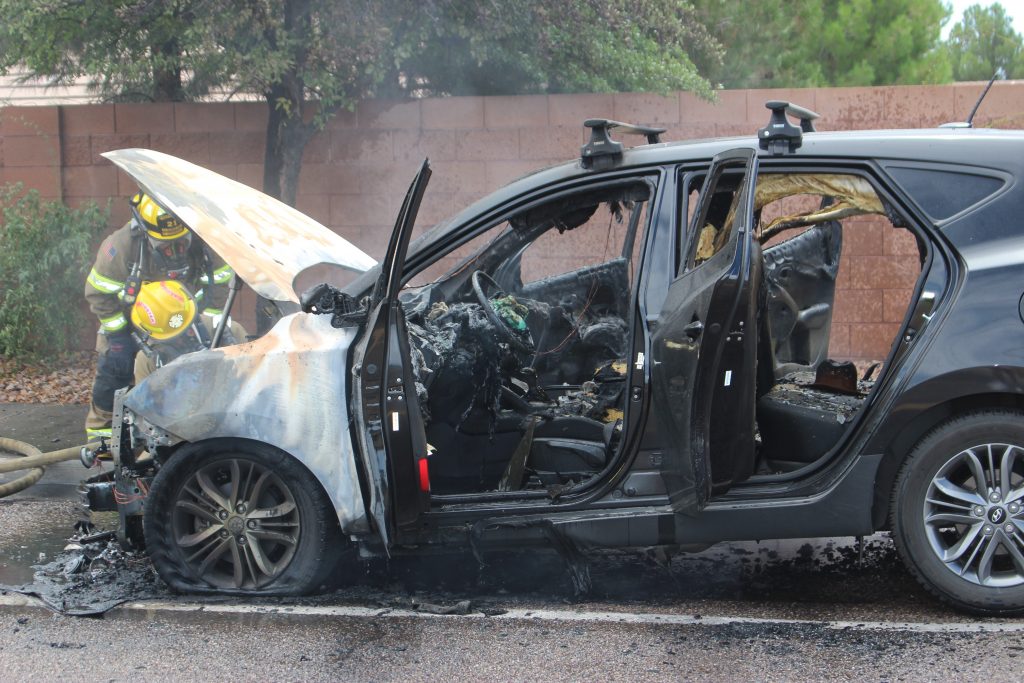 A Hyundai SUV is destroyed after a fire that started under the hood spread to engulf the vehicle on 900 East, St. George, Utah, July 5, 2019 | Photo by Cody Blowers, St. George News 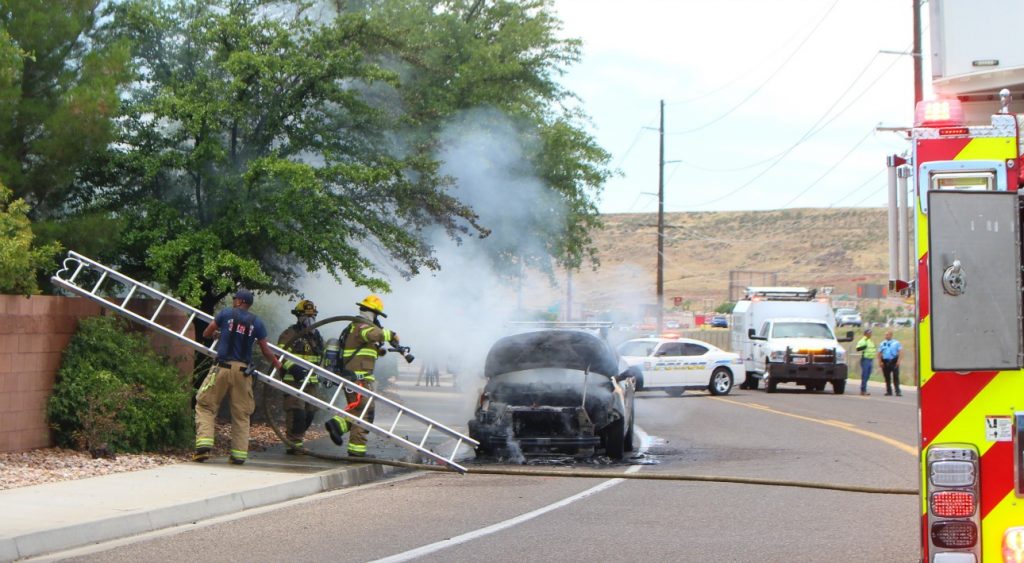 Firefighters place a ladder on a retaining wall to access two pine trees that caught fire when rubber and debris shot into the air during a vehicle fire on 900 East, St. George, Utah, July 5, 2019 | Photo by Cody Blowers, St. George News

Car recently taken out of storage catches fire on I-15