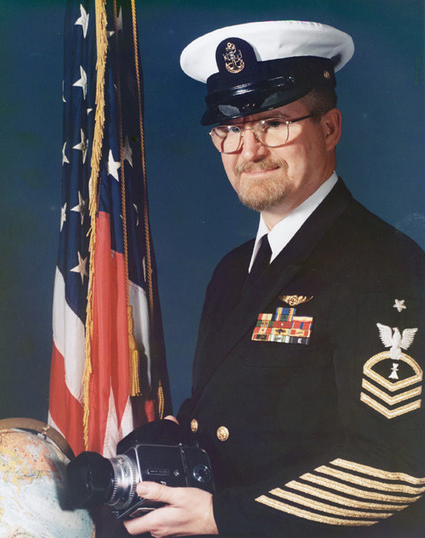 Born in Nebraska in 1934 and raised in Denver, Bob went on to serve a 26-year career as a U.S. Navy photographer specializing in air-to-air photography. He next conceived and produced The Hook magazine, Journal of Carrier Aviation, acting as editor-in-chief for 15 years, capping a 42-year career as an aviation photographer and writer in 1991.

In addition to being an acknowledged author on Naval Aviation, he wrote and published numerous books on the subject. He also received numerous awards, including being flown to Italy to be awarded a Lifetime Achievement Award from the International Symposium for Aviation Photography.

Moving to St. George in 1992, he built his home in Dammeron Valley and lived there until his passing. His move to Dammeron Valley was when he retired his flight gear and hitched up a pair of hiking boots. Those boots, and the many pairs that followed, enabled him to capture the splendor of the wilderness of the southwest, especially in the St. George area.

He became a Bureau of Land Management volunteer in 1993, producing many Brown Bag programs. He often expressed his deep, sincere gratitude to his long-time hiking partners who provided valuable assistance in obtaining many thousands of outstanding photographs, many of which hang in offices and facilities around Southern Utah. He was extremely proud of being able to show the general public the beauty to be found in the southwest desert areas surrounding St. George.

He was preceded in death by his father, Walter Baird Lawson, and mother, Grace Asenath (Nee Hudnall) Lawson, who was commonly known as Sallie, and by his daughter, Tracy, and his son, Kurt. He was surrounded by his son, Matthew, grandchildren AJ, Robert and Barbara along with his adopted son, Stagg Summers, and his significant other, Lynn Brklacich.