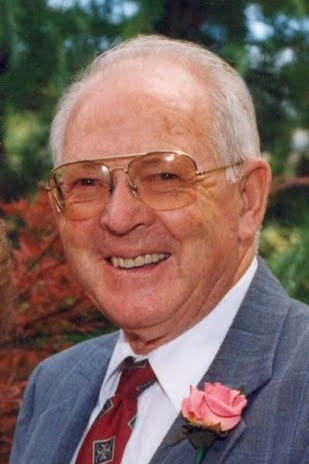 Junius “K” Barton, commonly known as “June,” was born at home May 24, 1923, in the small town of Tropic, Utah, to Karma Johnson and Leo Lorenzo Barton. He passed away peacefully June 23, 2019, at the age of 96, from causes incident to age. June was the sixth of ten children: Delila Heaton, Delna Kenworthy, Joseph Lorenzo (Ren), Elsa Riding, Cloyd Garth, June, Sylvia Kirkland, Mary Dawn Cox, Karl Gordon and Leo Jay. His parents also raised another child from infancy, Willis Walter Young, known to everyone as “Billy Barton.” They lived a happy life growing up in a loving home. There were so many kids in their area, it was called kid’s corner. They would build bonfires out in the street and play fun games like “Over the River” and “Kick the Can.” June graduated from Tropic High School in 1941, where he was involved in music and played basketball. The summer after his graduation, their family moved to St. George, Utah.

June solemnly claimed his position in the “Greatest Generation,” by serving honorably in the Navy during World War II. He served on the USS Jupiter cargo ship in the South Pacific as an electrician. It was a heart-warming, memorable sight when he saw our beautiful American flag raised at Iwo Jima.

June was raised during a time of national and local poverty which tempered him with frugality and creativity that blessed him his entire life. He was a humble, hard-working man, willing to do whatever he could to provide for his family. As a young boy he delivered newspapers. He was also the film projectionist once a week in Tropic and nearby Cannonville. He learned to be a skilled carpenter from his father and worked in construction with him. After moving to St. George he worked as a milkman, garbage man, custodian, and yard foreman at Pickett Lumber Company. He worked for 28 years at the St. George Post Office, and was known to many as the “friendly window clerk.” June knew all the streets and addresses and most of the residents of St. George, a real attribute to his work. He created and ran the business, Kozy Kamper, as well as Barton’s Laundromat. He could fix almost anything and make most things with whatever was available.

The Leo Barton family was very musical and most of them played musical instruments. June played the trumpet in a family band. They would put on special musical programs as well as play for many of the dances in their town and area. He had a beautiful bass singing voice and sang in men’s quartets and many church choirs. He was also a wonderful dancer and had excellent rhythm. He served as the dance director in the St. George 3rd Ward M.I.A. and also the St. George Stake for a number of years. Dancing became second nature to him. He loved it. His daughters treasured the time they were his dance partner–dancing on his toes.

June loved to be of service. He seemed to be happiest when he was doing something for someone else; whether he was mowing a neighbor’s lawn, babysitting a grandchild, cutting out wood projects for his kids or supporting his wife as an unofficial counselor in all of her callings. Dad also loved a bowl of popcorn, listening to the Dodgers on the radio, rebuilding a totally wrecked travel trailer, reading a good novel, family reunions, traveling with friends and family, cracking pecans to share or gathering a load of wood on Cedar Mountain.

June was active in The Church of Jesus Christ of Latter-day Saints and was always steadfast in his faith. He had many callings in the church, where he served with kindness, commitment and quiet strength. June was a man of few words, but his testimony of the Gospel was shared through his consistent Christ-like example. He and Margaret Ann served a mission in the Illinois Nauvoo Mission and for four years served locally at the St. George Tabernacle.

June was devoted to his family and loved spending time with them. What a blessing to have had such a great, genuine, gentle role model in our lives. He is survived by his five children and their spouses, 27 grandchildren, 76 great-grandchildren and three great-great grandchildren; sister, Mary Dawn Cox; brother, Leo Jay Barton and brother-in-law Vaughn Heaton. He was preceded in death by his wife, Margaret Ann, his parents and many other family members.

The family wishes to thank those involved in June’s care, including the kind, loving care given by Zion’s Way Home Health and Hospice and the Wentworth Memory Care at the Meadows.