WASHINGTON CITY — Although construction on the new Crimson Cliffs High School is still in its final stages, most of the school’s fall sports teams have already started to hold tryouts and light practices.

St. George News caught up with Crimson Cliffs activities director Mike Winslow and a few of the school’s fall sports coaches earlier this week at the adjacent Crimson Cliffs Middle School, which opened last year and is located just to the northeast of the high school building that is scheduled to open in early August.

“We’re very excited to be our own new student body, to get going with our activities, our athletics and our academics,” Winslow said. “It’s going to be a great year, beautiful facility, and there’s so much excitement with being a new school.”

Crimson Cliffs High School Principal Rusty Taylor said the school is expected to have an initial enrollment of around 750 students in grades 10-12, making it the smallest Region 9 school in terms of student population. But with the new school located within the rapidly growing Washington Fields area east of St. George, those enrollment numbers are expected to grow.

“We will still compete in 4A, as we expect our numbers to increase quickly and we want to keep all the St. George schools in the same division,” Taylor said. 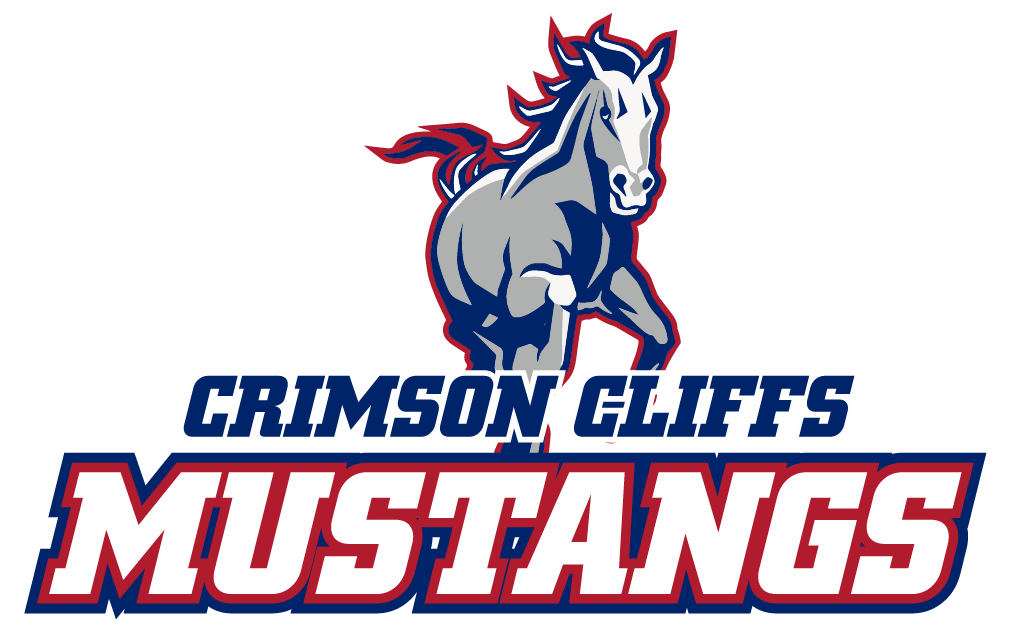 Crimson Cliffs will be Washington County School District’s ninth public high school overall and the sixth one to belong to the Utah High School Activities Association’s Region 9, making an even eight teams in that 4A region for almost all sports. That essentially means saying goodbye to bye weeks, as the region’s eight teams will play four contests on a given game night during the regular season schedule for most team sports.

Winslow said most of Crimson Cliffs’ students attended Desert Hills last year, with another 150 or so migrating from within Pine View High’s previous boundaries. Additionally, a number of sophomores are moving up to CCHS after having attended ninth grade at Crimson Cliffs Middle School, which shares its mascot and colors with its namesake high school.

Tuesday morning, approximately 30 student-athletes gathered on the grass for a short football practice session. Head football coach Jaron Tate, who has been an assistant at Dixie High for the past decade or so, brought a couple of his players up to a storage room inside the middle school to try on the team’s new jerseys and shoulder pads. The Mustangs’ new helmets have also arrived, but do not yet have the logo decals applied on them.

Defensive back Malachi Kaonohi, a junior, was the first player ever to put on a Crimson Cliffs football jersey, trying on uniform No. 5 right after his coach pulled a shirt and shoulder pads out of one of the many large cardboard boxes filled with recently delivered equipment. Kaonohi, who played for Dixie High last year, said he’s looking forward to playing for the Mustangs.

The Crimson Cliffs High football team will play two preseason games on the road (at Manti on Aug. 16 and at Lehi on Aug. 23) before opening its regular season at home against Canyon View on Aug. 30.

“We’re going to be young, but we’ve got a good solid group of girls coming out and we’re excited to get things rolling. We know Region 9 is going to be super tough, but I think we’re up for the challenge.” 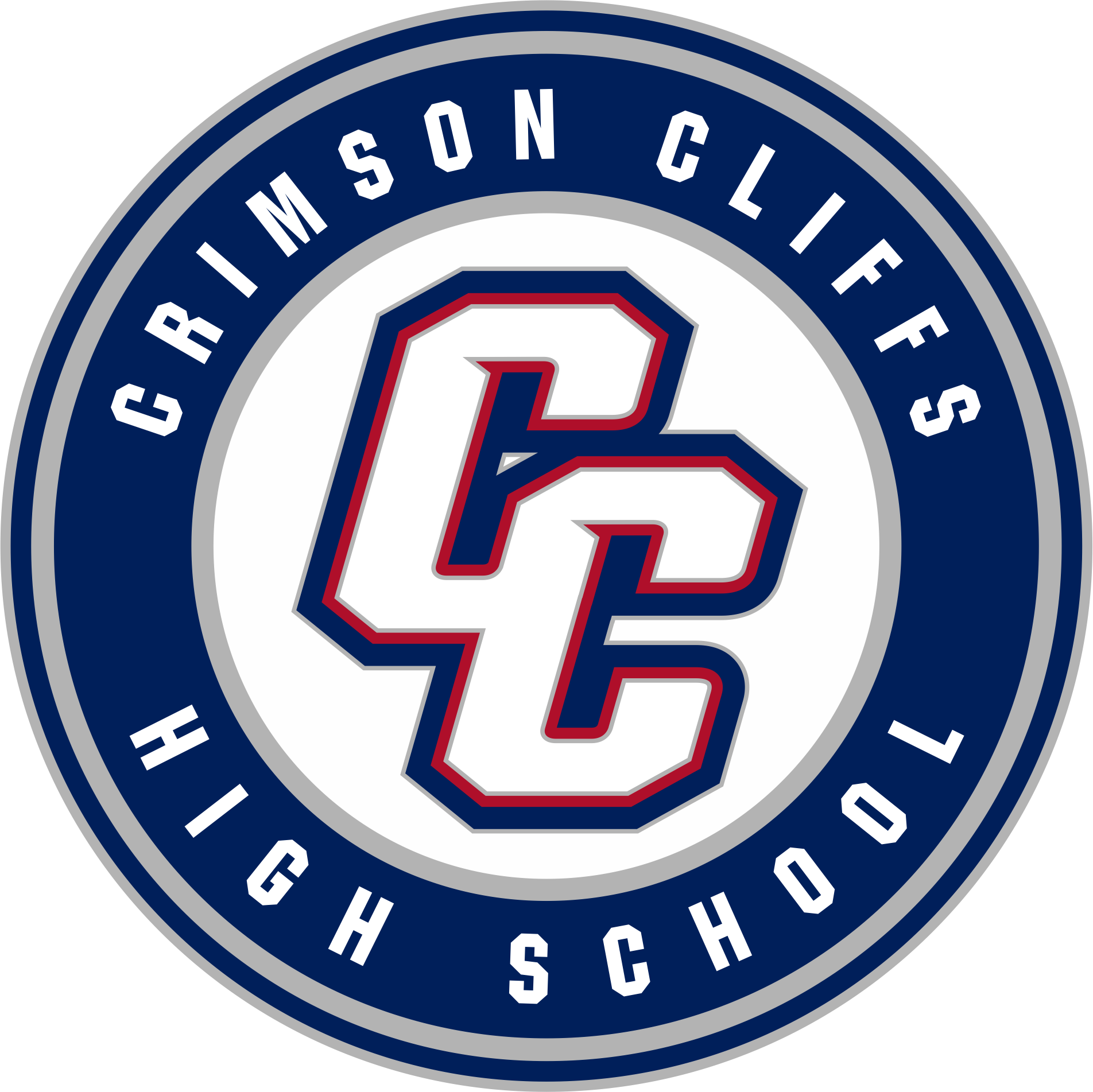 Head volleyball coach Alexa Goulding, who played for Desert Hills when the Lady Thunder took state in 2014, is now in her second year of teaching and coaching, having served as an assistant at Desert Hills last year.

“We are so excited to create greatness with the volleyball team at Crimson Cliffs,” Goulding said.

“We’ve had so many girls already come to our summer open gyms and camps,” she added, noting that she’s already  seen players come in and try out from several surrounding schools.

“I have girls that have shown up from Desert Dills, from Dixie, from Hurricane, Snow Canyon and Pine View,” Goulding said. “So, I’m kind of getting girls from everywhere, and it’s going to be really fun to mesh them all together and see what we can do this year.”

Head cheerleading coach Nicole Cleverly said she is excited to get the new program started.

“We have a great group of girls and boys getting to ready to lead the school,” Cleverly said. “We’re excited about the new traditions we get to start, and the things that we get to implement in the new school, to bring school spirit and to support all of our sports and athletes and activities here at the new high school.”

Cleverly added her squads are learning new dances, cheers and other skills, “things that we can bring back and really integrate the school and bring everyone together to be a family.”

Winslow, the activities director, said any students desiring to participate in or try out for a sport are invited to email that sport’s head coach for information on how to proceed. All athletic transfers are subject to UHSAA rules and regulations.

“Students want to be involved,” he said. “Our sports teams have been active all summer. Our teachers want to get going. They want to meet our students. It’s just an exciting time to create this new Crimson Cliffs Mustang identity.”

Crimson Cliffs High School, which is scheduled to officially open in early August, is located at 4430 South Crimson Way, Washington (click here for map). For more information, visit the school’s website or its Facebook page.