A concept drawing of the visitor complex to be built on the east side of Zion National Park | Image courtesy of the Zion Forever Project, St. George News

ST. GEORGE — Zion National Park, as part of a public-private partnership, has announced plans to build a visitor contact station on the east side of the park as part of a new gateway community known as the “Applecross Station Visitor Center.”

The station is being built as a collaborative effort between Zion National Park, Kane County, the Zion Forever Project, the Bureau of Land Management and the Zion Mountain Ranch landowners. It will be located just outside of the park boundaries and will include a visitor center, shuttle hub, private businesses and a new trail network.

Each year, over 1 million of Zion’s visitors enter through the east entrance of the park, where the only point of contact is the entrance fee station where rangers often have little time to share information and answer questions.

“Currently for visitors coming from the east side, the only information they get is at the entrance station. It is confusing for them to figure out where to park or how to utilize the main canyon shuttle,” Zion spokeswoman Aly Baltrus said.

The park first identified a need for a visitor center on the east side of the park in the Zion National Park General Management Plan in 2001, Superintendent Jeff Bradybaugh said. But putting a visitor center within the park boundaries wasn’t an option, mainly due to a lack of space on which to build it.

Zion’s need for an east entrance visitor center, combined with efforts by Kane County leadership to create jobs in the area, and the willingness of East Zion property owners to donate land to the cause, set in motion plans to design a second gateway community for Zion.

Applecross Station will be located at the junction of state Route 9 and North Fork Road,  which is about a four-minute drive from the east entrance to the park. The property is owned by Kevin McLaws, who operates Zion Mountain Ranch.

“The opportunity here is to build an appropriate gateway community basically from a blank canvas,” McLaws said. “So that’s what we’re all about, is to create the appropriate welcome mat to Zion National Park, one of America’s most treasured landscapes.”

The visitor contact station will offer many of the same amenities as the visitor center in Zion Canyon, as well as a few of its own, including information about the park, exhibits, backcountry permits, a Kane County Office of Tourism Museum, a theater, food, public restrooms and a Zion Forever Project store.

As it is a public-private partnership, the visitor contact station will be an official national park service center, designed by the national park, but will be run by the Zion Forever Project that will most likely operate in the facility through a long-term lease of the building. The store will help support the center, which will be staffed by a number of agencies involved.

The station will offer much more than a visitor center, however. The hope is that private businesses will operate out of the area and offer shopping, tour guides, gear outfitters and culinary experiences. McLaws said he also intends to offer more activities and experiences than the average gateway community, especially farming and agriculture related learning opportunities.

“Customers and guests can come when they travel to Zion Park and really have more of an immersive experience in the area rather than a check it off the list park visit,” McLaws said.

Plans are also in motion to operate a shuttle system out of Applecross Station, which would run through the park on SR-9 and end at the visitor center in the canyon. Project organizers are working with the Utah Clean Cities Coalition to obtain three electric shuttles as part of a test case, said Dirk Clayson, a retired Kane County commissioner who is helping plan the station.

Washington County recently performed a feasibility study to fund a transit system from St. George to Springdale, where visitors could then pick up a shuttle into the main canyon. Kane County is also conducting a feasibility study to determine whether it can create a shuttle system that would run from Kanab to the Applecross Station Visitor Center, and then into the park.

If financially feasible, it would create a shuttle system connecting visitors from Kanab to St. George, and to everything in between.

“That will help with overcrowding at the tunnel, along the roadway and at the parking lots, although it will not help overcrowding in the main canyon,” Baltrus said.

What would help, she said, is the network of trails that have been designed in the East Zion area that will provide visitors with alternatives to the crowded trails in the main canyon.

So far planners have designed five new trails, covering about 25 miles total, Clayson said. Most of the trails begin on private property at or near Applecross Station and end up on BLM land. Future plans include connecting those and other trails to those already within the park.

“They’d be a really spectacular trail network that would give a wide variety of experience and super scenic views,” he said.

The group plans to start work on one of these trails as soon as this fall, and will likely continue to build upon the trail network for the next five to 10 years.

Last week, they received a $150,000 grant from the Utah Office of Outdoor Recreation to go toward developing the trails. The grant will not cover the entire trail system, Clayson said, but will allow them to start on at least one trail.

Funding for the visitor contact station itself, which is expected to cost around $12 million, will come from a tax increment incentive program. Instead of creating a new tax to pay for it, the county would collect the incremental tax growth that would normally be collected in the area from the transient room tax, sales tax and property tax, and put it toward the visitor center, Clayson said.

An important element in making the plan work is private investors bringing businesses to the area, which would increase the incremental tax.

“Basically, because we would be creating the visitor center and creating the trail networks it would allow for the private landowners to make investments in additional lodging facilities that would then allow for incremental tax growth,” Clayson said.

The county is in the process of completing a financial study to determine the feasibility of the plan. So far it appears that it will be able to raise the $12 million needed and start the two-year construction project by fall 2020.

“That’s optimistic, and I wouldn’t be surprised if it doesn’t get pushed … but if you don’t have some target you’ll never even get close to it. So that’s what we’re working towards,” Clayson said.

While the gateway community design will offer many of the same services as Springdale, those involved in the project don’t anticipate it will hurt the town’s businesses or slow visitation to the visitor center in the canyon, but rather that the two communities will complement each other and help to extend visitor stays in the area.

Breck Dockstader, owner of Cliffrose Lodge and Gardens, Springdale Visitor Center and several other vacation rental companies and restaurants in Springdale, said he strongly supports the development of a visitor center on the east side of the park.

“There are so many wonderful places to visit and see on that side of Zion both in and outside of the park. As a Springdale business owner, we are excited to have another option to send out guests to experience. In my opinion, visitor distribution is critical. I think the project will not take away from Springdale and will help bridge a long-lasting divide between both sides of Zion.”

Park officials hope that Applecross Station will not simply serve as an informational visitor center, but will become its own attraction for visitors and locals alike. Each visitor center will share different stories and history, as each side of the park has its own unique points of interest. And while they do expect that the visitor center will become a destination, the planners are not concerned about it increasing overall visitation to the park.

“If you look at visitation to Zion, it’s been going up since the park was created, and the park is well known nationally and internationally. I don’t think the visitor center itself will attract more visitors necessarily. We’re seeing that upward trend regardless,” Bradybaugh said.

And no matter how many visitors and private businesses that Applecross Station attracts, an integral part of the landowner’s plan is to maintain the integrity of the natural resources in the area and the open spaces for which the East Zion area is known, and protect it for future generations. 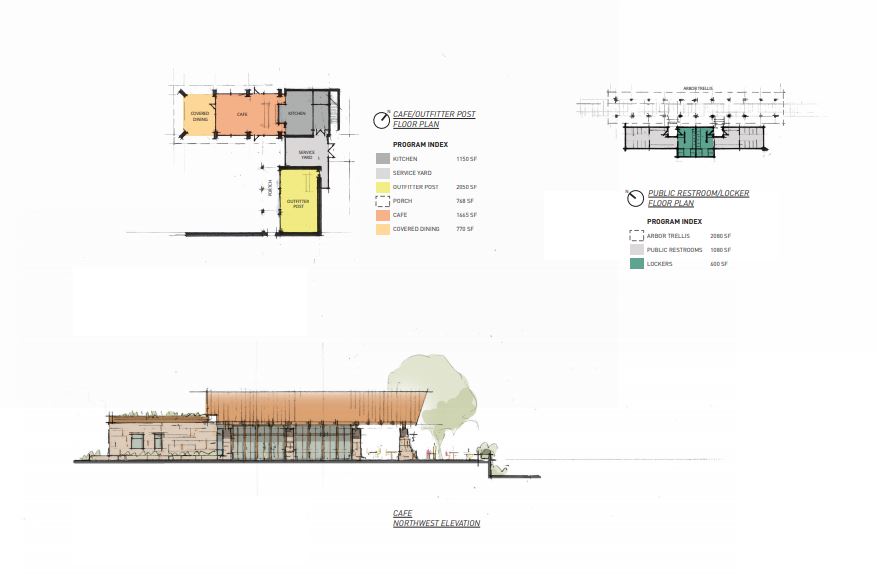 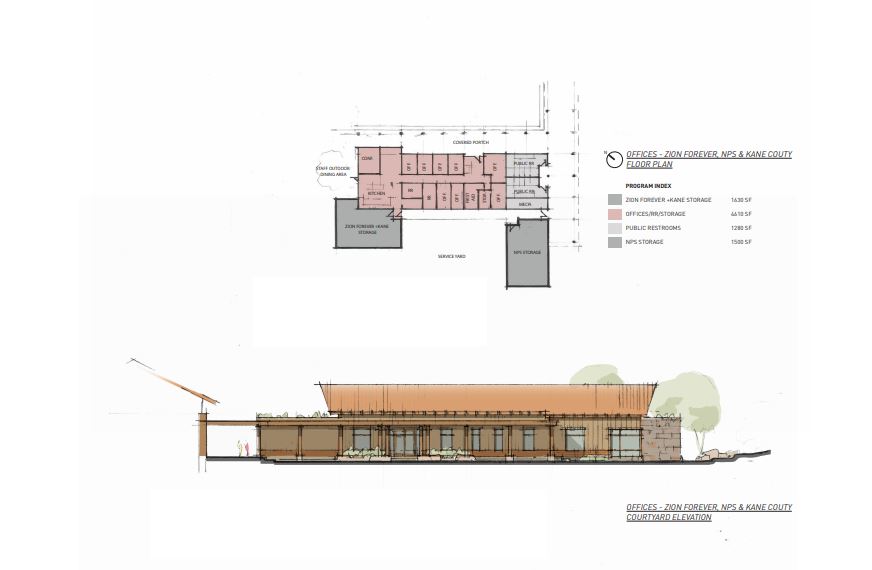 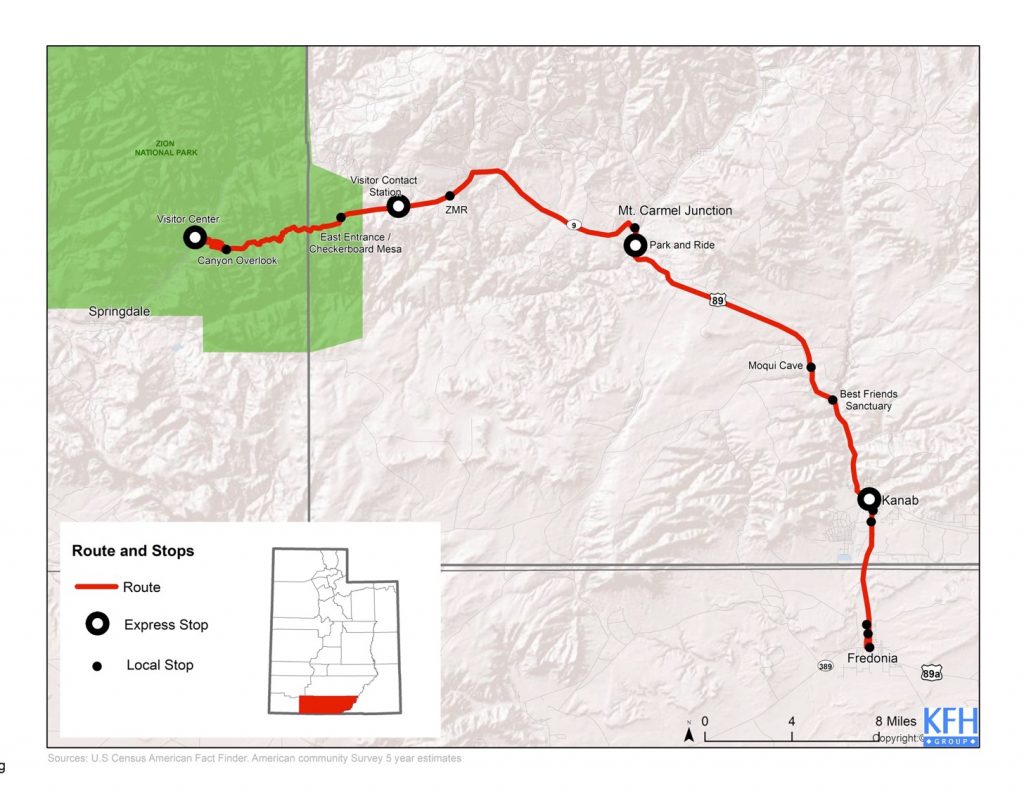 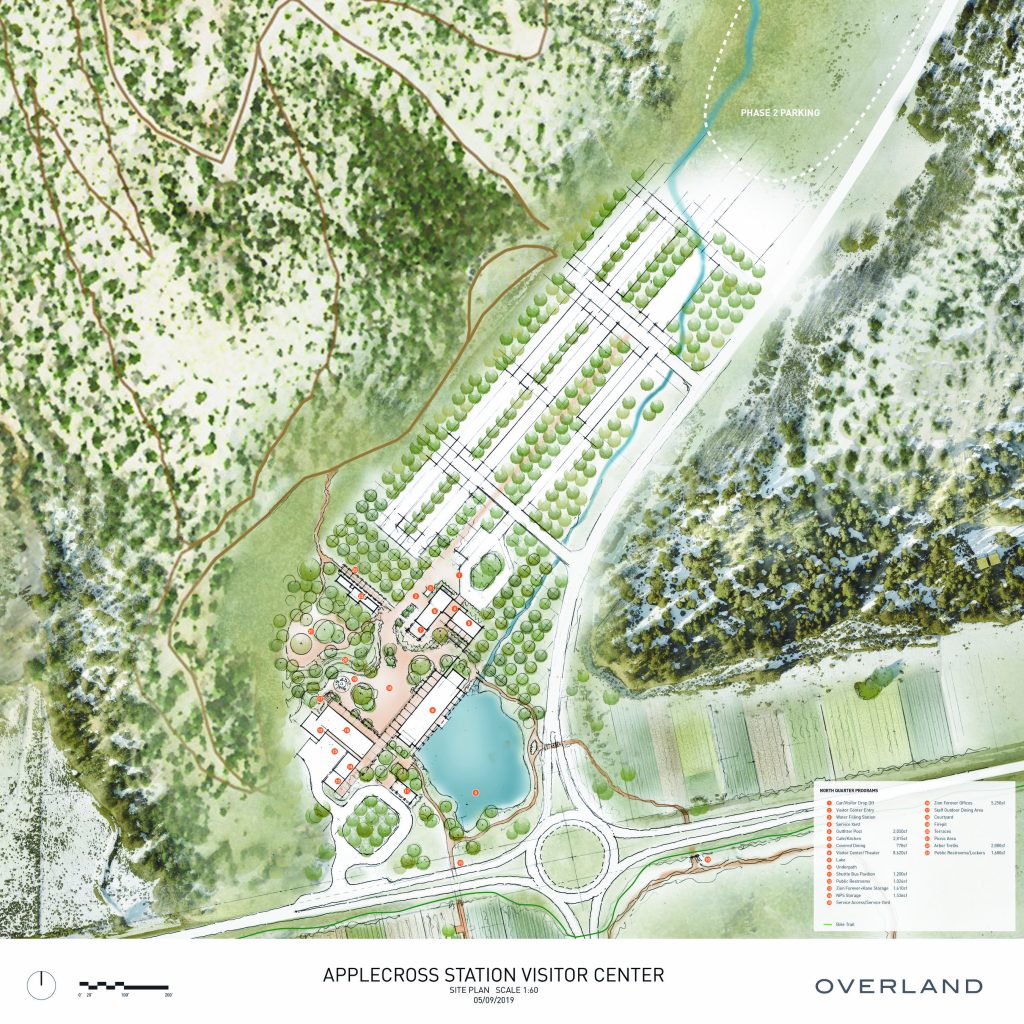 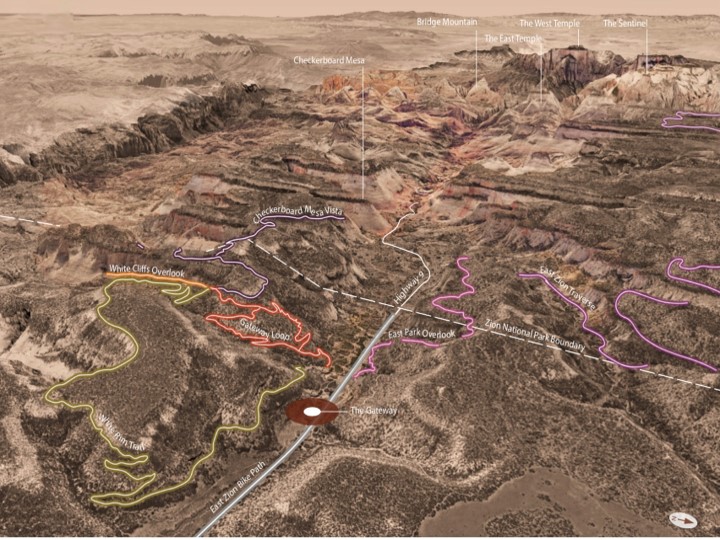 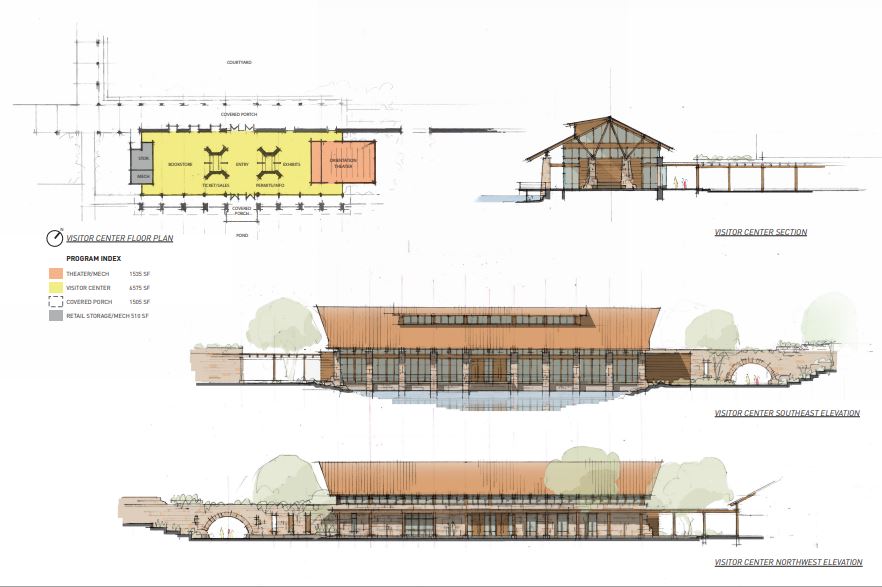 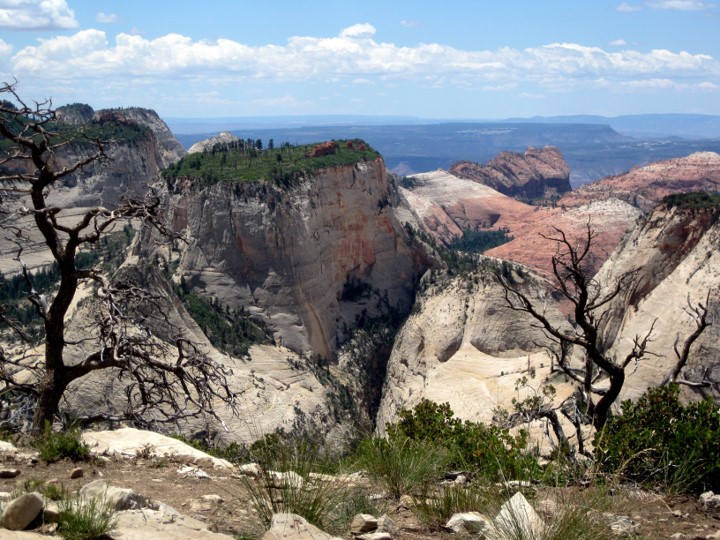 One of the views that will be visible from the new trail network planned in East Zion | Image courtesy of the Zion Forever Project, St. George News 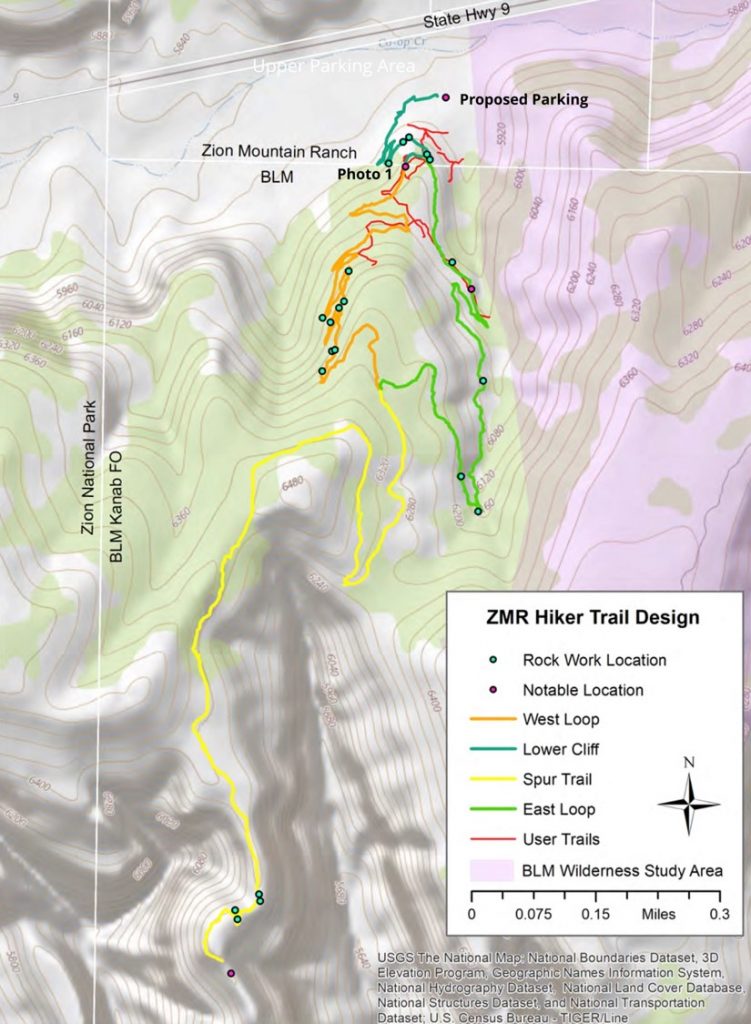