ROCKVILLE — Residents of Rockville truly had cause to celebrate Friday night as they held a grand reopening celebration for the completion of restorative work on the most recognizable landmark in the town, the 95-year-old Rockville Bridge.

In 2012, UDOT inspected the bridge, which was built in 1924 to open a shorter route from Zion National Park to the North Rim of the Grand Canyon, and noticed signs of deterioration, downgrading its carrying capacity from 25 tons to 14 tons, putting the town into a conundrum as to what to do with it — restore it or replace it.

In the wake of that inspection, town leaders successfully obtained funding for a new two-lane bridge through the Joint Highway Committee Off-System Bridge Funds Program, but overwhelmingly, town residents favored restoration over replacement.

“When 20 percent of the town’s population showed up at a meeting of the Non-Urban Technical Subcommittee in support of saving their bridge, the committee listened to the residents and recommended increasing and reallocating funds for the restoration of the historic bridge to the Joint Highway Committee who voted to approve,” a press release announcing the ceremony states.

Residents went to bat to convince the Highway Committee to repurpose $3.2 million originally earmarked for construction of a replacement bridge to $2.1 million for restoration of the beloved icon, which is the only Parker Through-Truss Bridge remaining in Utah.

Four years ago, a poem by then-9-year-old (now 13) Romy Thomas, who lives just a few houses down from the bridge, impressed the committee so much it added $400,000 to its funding allowance for the project.

Even after landing this funding, however, the town still needed to raise $169,250 in required grant matching funds as well as to cover any cost overruns. The town went to work to raise enough money to save its aging treasure, Mayor Pam Leach pointed out in her remarks at the ceremony.

“This is not something Rockville has ever attempted before,” she said.

The fundraising project seemed daunting for such a small town, but Leach described how they were fit for the task. Many came forward to help secure the funding necessary to make the grand restoration project a reality. From placement of collection jars all over town to several fundraisers to a state legislative allocation and Romy’s poem, all things came together for the town’s good, securing enough for the grant match and cost overruns.

Alison Thomas, Romy’s mother, read the poem as part of the ceremony.

Leach said the ceremony was the culmination of seven years of effort, which has spanned the terms of three Rockville mayors, including her. She thanked HW Lochner for its engineering work on the project as well as Wadsworth Brothers Construction, the restoration contractor.

Last fall, Wadsworth Brothers installed a temporary bypass bridge and began work. The project included giving the bridge a new deck, extra supports and a new paint job. Leach joked that there were several “local resident engineers” who came to offer the contractors their advice on how things should be done.

Despite the wet winter, the contractors forged onward and on Feb. 16 of this year, Leach said Rockville residents were able to walk on their bridge once more. It opened to traffic again Feb. 18.

After Leach’s remarks, state Rep. Brad Last, who was integral in getting the legislative funds for the bridge, spoke. He said the bridge has always been dear to his heart. He complimented the residents of Rockville who went to the Utah Legislature and helped it recognize the historical value of the bridge.

Southern Utah’s representative on the Utah Transportation Commission, Naghi Zeenati, a St. George-based realtor, took the microphone next and said he fell in love with the bridge on a trip to Southern Utah 28 years ago while living in California and soon after moved to the area.

Zeenati said Gov. Gary Herbert called him to serve on the commission seven years ago, about the time it was determined that something needed to be done about the bridge.

UDOT felt the same way about the bridge with the mindset, “If we can restore it, why destroy it?” he explained.

He then commended the people of Rockville for their efforts in raising money to save the bridge.

“Today your beautiful bridge is even more beautiful,” Zeenati said to cheers from the gathered crowd.

Leach presented a plaque to Last, Zeenati and others who helped with the bridge effort thanking them for their service. Other plaque recipients were Guy Evans of HW Lochner and Mike Davies of Wadsworth Brothers Construction, among others.

In addition to distributing plaques, Leach thanked two foundations who donated generously to the project. The George and Delores Dore Eccles foundation donated $75,000 to replace a water line that was attached to the bridge that had weakened it. The water line will now be tunneled under the river. Leach also expressed gratitude for the Simmons Family Foundation’s $25,000 donation to the project.

The event concluded with a ceremonial ribbon-cutting and a parade on the bridge led by two cars that are somewhat the bridge’s contemporaries — 1929 and 1934 Ford Model “A”s — followed by all those in attendance relishing its new look and the fact that there is no longer a sign saying its carrying capacity is only 14 tons. 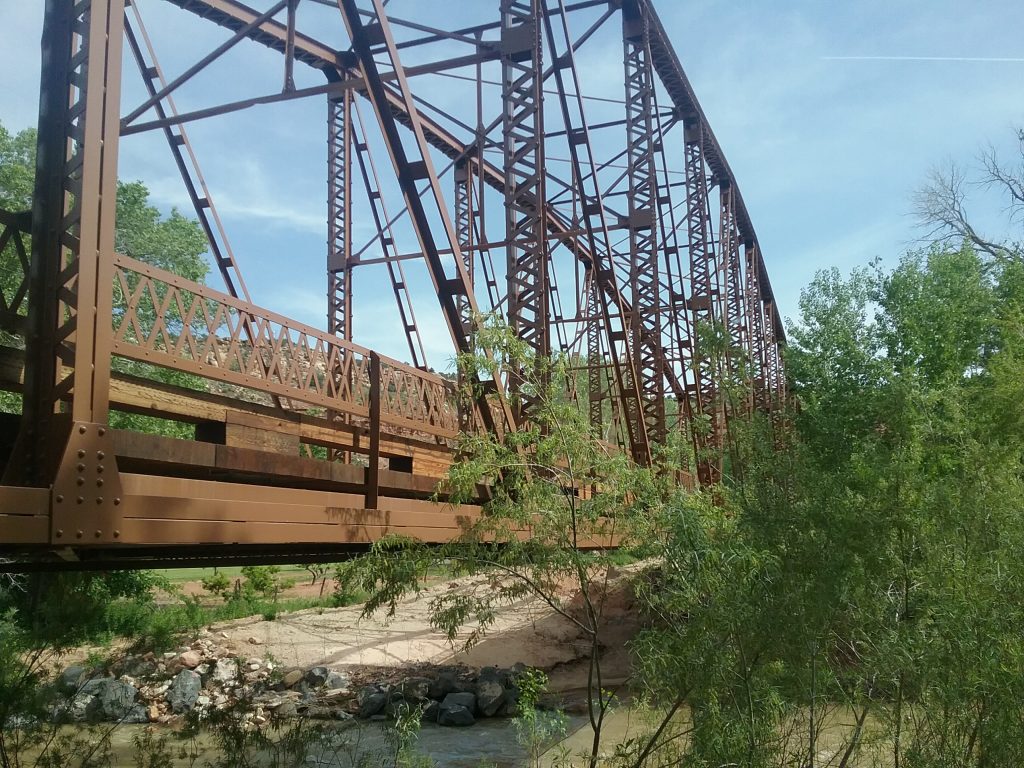 The span of the Rockville Bridge from its northwest side, Rockville, Utah, May 3, 2019 | Photo by Reuben Wadsworth, St. George News 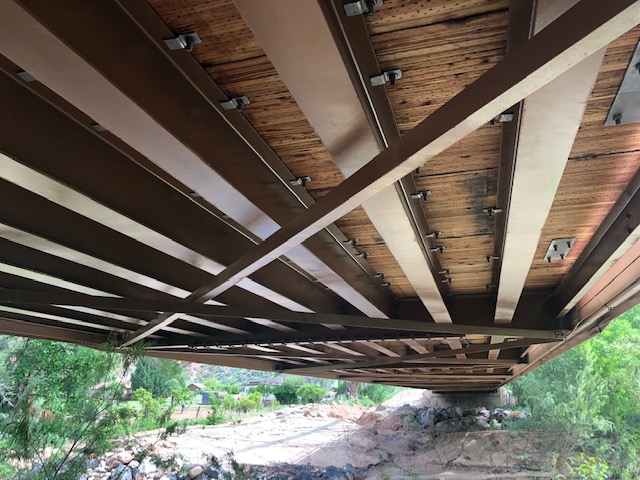 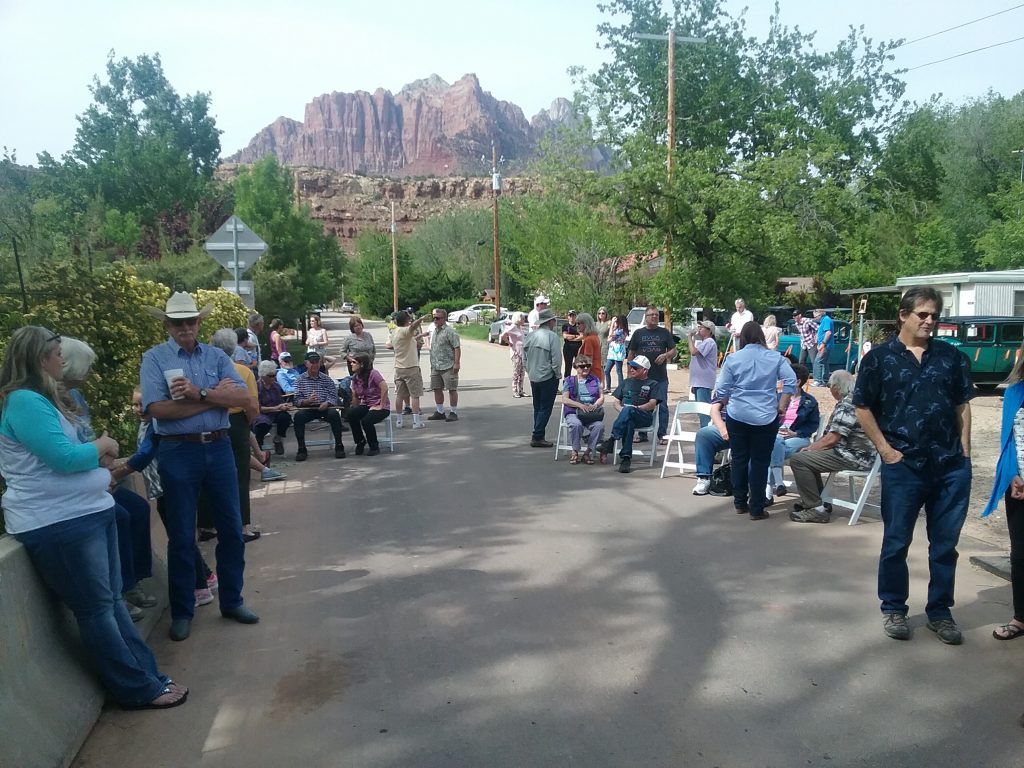 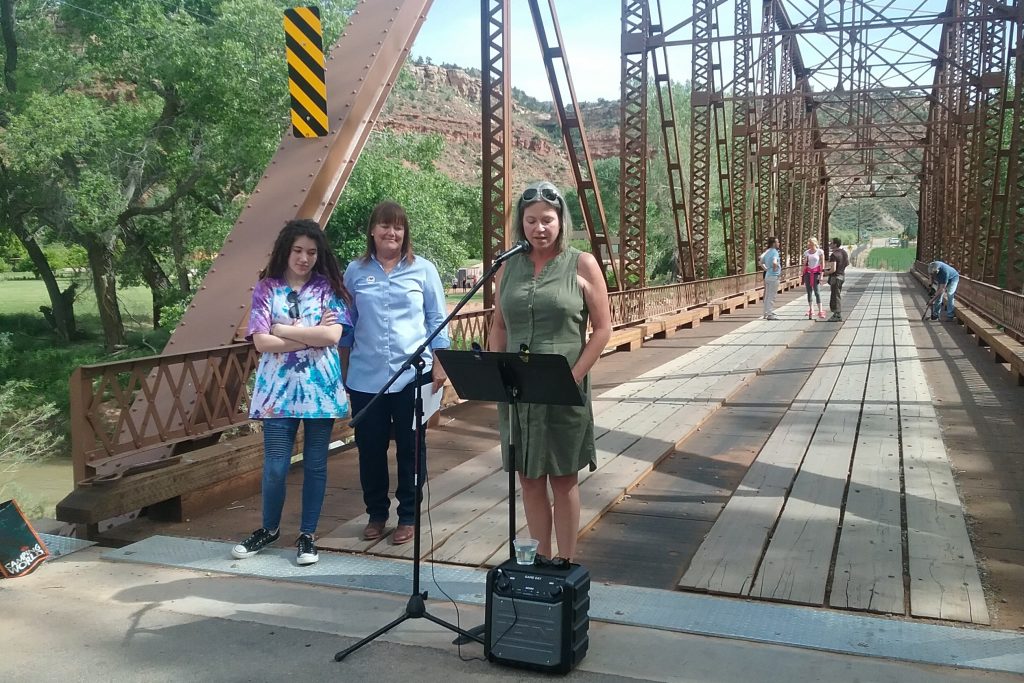 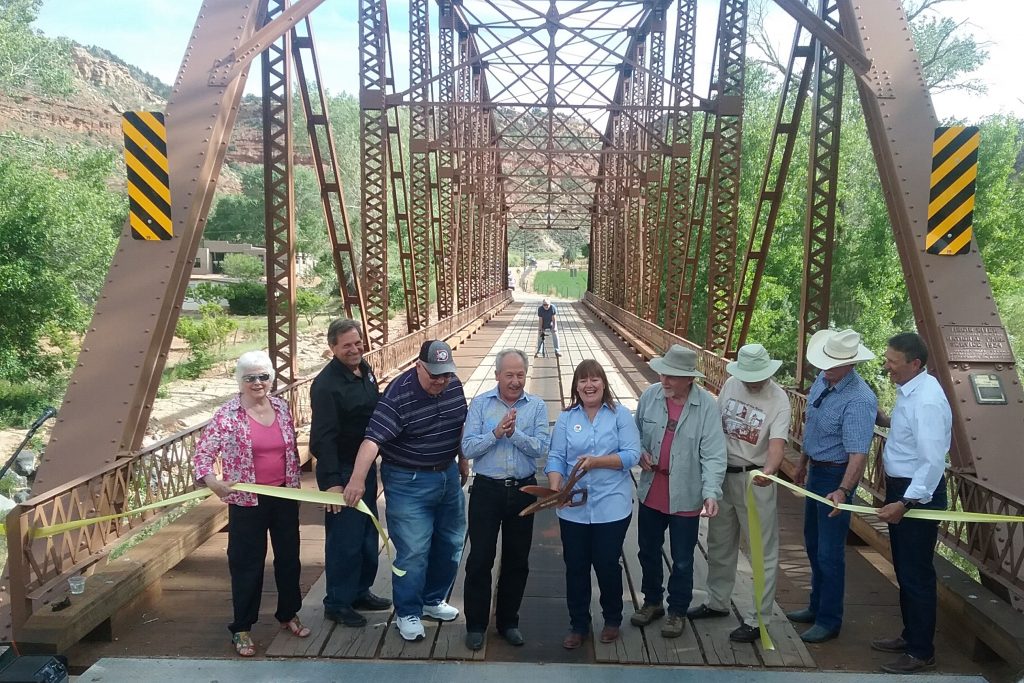 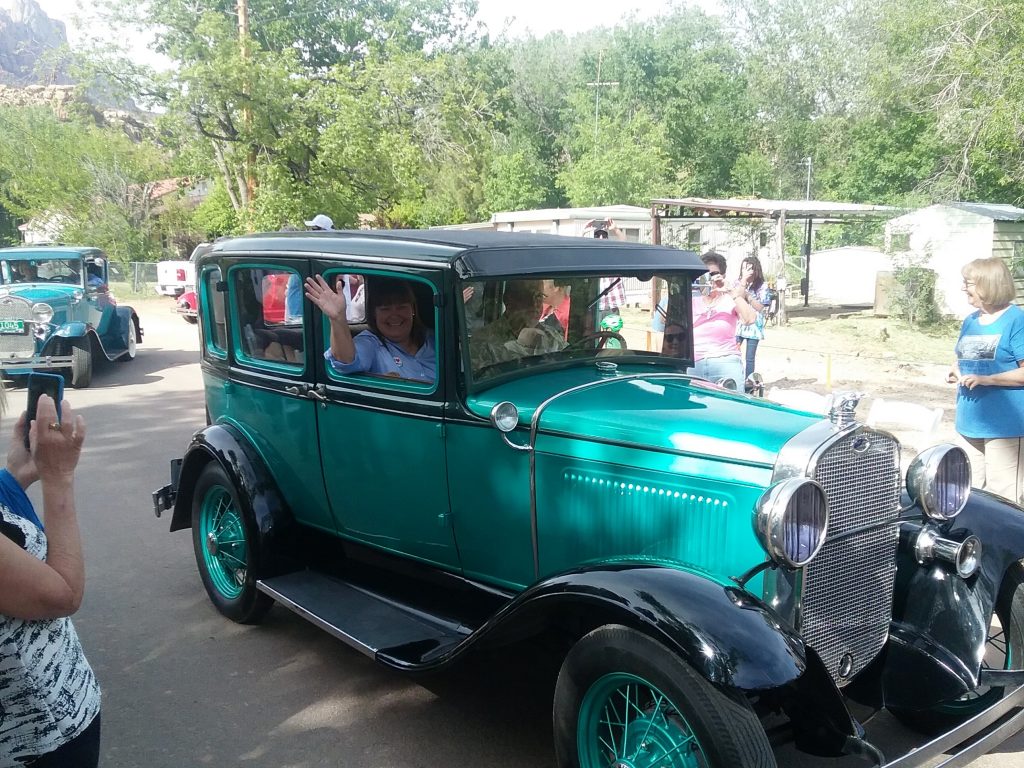 Rockville Mayor Pam Leach rides in a Ford Model A to lead a small parade across the Rockville Bridge to cap off the grand reopening ceremony, Rockville, Utah, May 3, 2019 | Photo by Reuben Wadsworth, St. George News 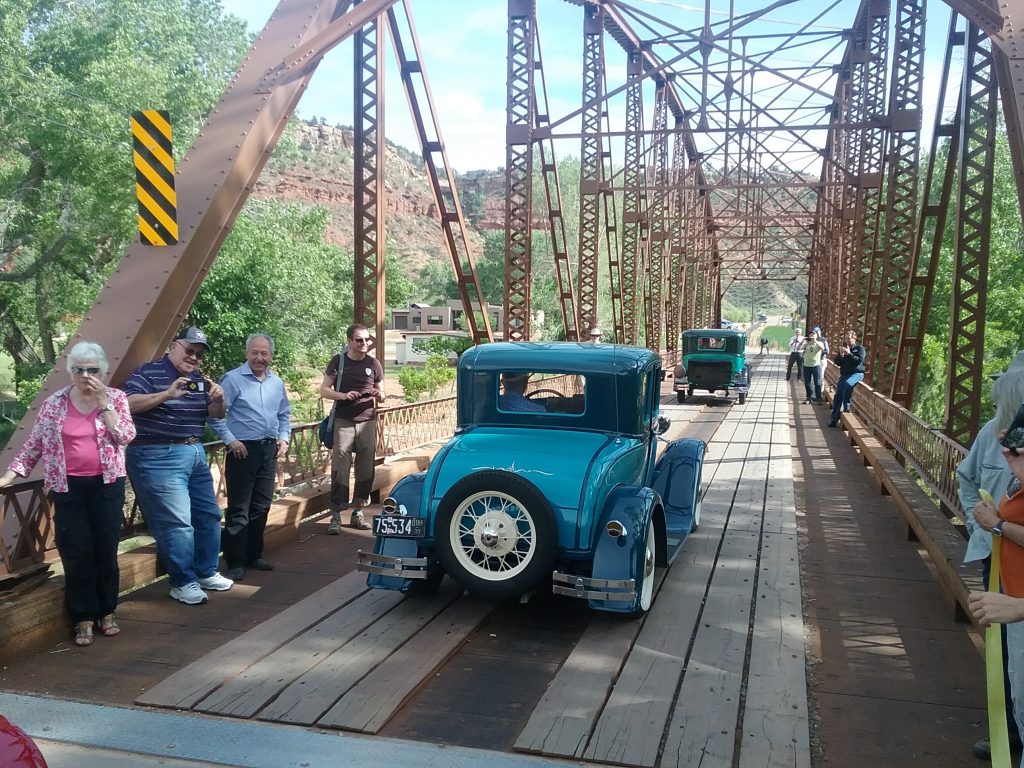 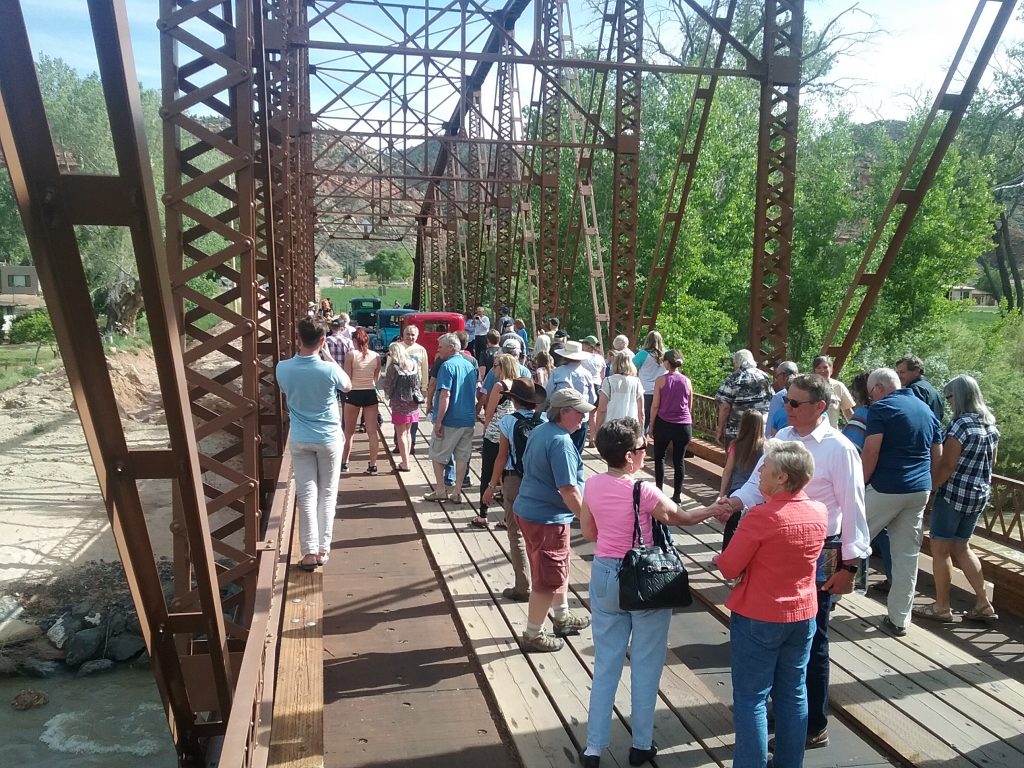 Reopening ceremony attendees follow the Model A Fords in a short parade across the Rockville Bridge, Rockville, Utah, May 3, 2019 | Photo by Reuben Wadsworth, St. George News 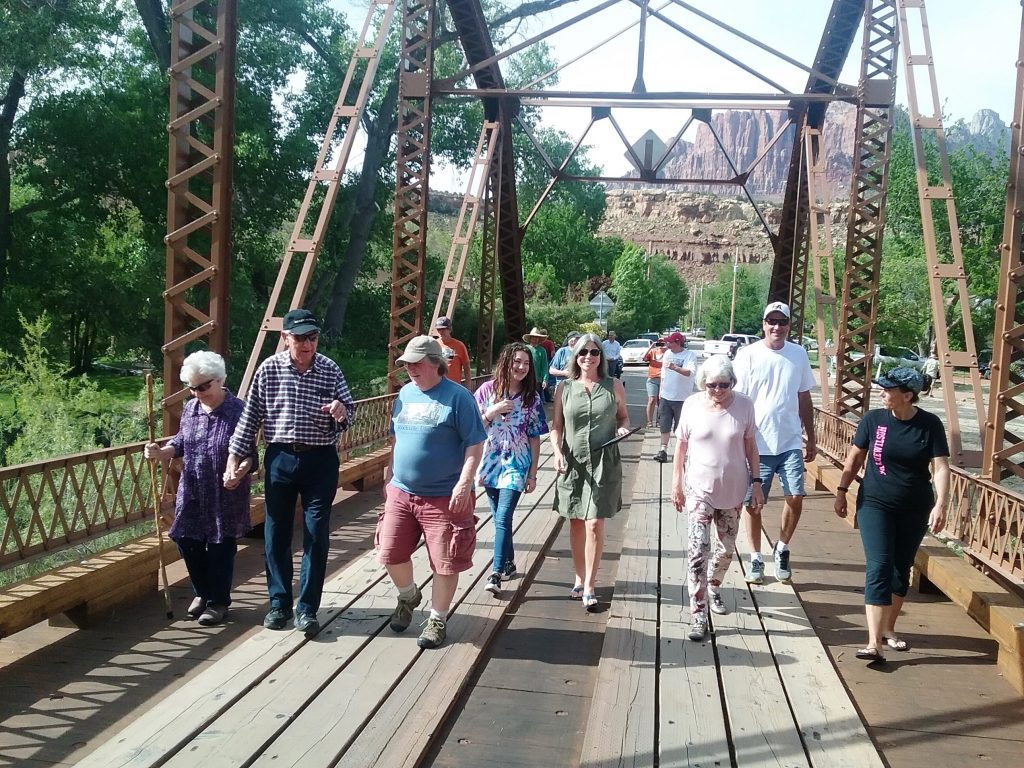 Alison Thomas (center) and her daughter, Romy (left), enjoy a stroll on the Rockville Bridge after the grand reopening ceremony, Rockville, Utah, May 3, 2019 | Photo by Reuben Wadsworth, St. George News

No Filter: Rocking the Rockville Bridge