Bruin is a middle school teacher, husband and father, and Paulson is a wife and full-time mother of four, but the two share a rather uncommon accomplishment: Both have competed in every full Ironman and Ironman 70.3 event held in St. George.

The two have raced in all kinds of weather, through pregnancies, injuries and the loss of loved ones. They have raced with their spouses and with friends, been inspired and have shared inspiration along the way.

Before the cannon goes off at Saturday’s race, marking Paulson and Bruin’s 10th St. George Ironman event, St. George News sat down with each athlete to learn more about their journeys, what and who inspires them and their future with Ironman races.

Paulson’s first competition was the inaugural St. George event – a difficult race for which she continues to hold a special place in her heart.

“I did my very first Ironman right here in St. George in 2010,” Paulson said. “It was number one, I had no idea what I was doing, it was absolutely a crazy hard day.”

The Ironman 70.3 St. George course is known throughout the triathlon circuit as being one of the most difficult courses, and the full-distance Ironman was equally, if not more, challenging, Paulson said. But something about the challenge and the beauty of the course hooked her.

“I kept coming back for more every single year because I love this course,” she said.

Bruin competed in several triathlons before attempting his first Ironman which took place in 2008 in Coeur D’alene, Idaho. Though he approached it with some trepidation, he said training for it in St. George with the red rocks was beautiful and the feeling of finishing was amazing. When it came time for St. George to host its first Ironman, Bruin said he was probably one of the first people to sign up.

Bruin likes to run with a purpose, dedicating his races to family and friends who have experienced significant challenges in their lives. Often, Bruin thinks of his mother who lost a leg and eventually her life to cancer. This year Bruin will race for his dad who always supported him and who cared for his mother throughout her battle with cancer.

Bruin’s dad passed away a few years ago as well but he always carries the spirit of his parents with him.

“Out on the course when it gets hard and I want to stop going, I think of them and it keeps me strong,” Bruin said.

Racing both for and with friends and family has been a highlight of Bruin’s near decade of racing Ironman events in St. George. Some of his favorite race experiences include crossing the finish line with his wife, Meri Bruin, especially when the two were able to complete the 2012 Ironman event, a year which saw heavy winds and very dangerous swimming conditions, he said.

In 2018, Paulson was able to finish the Ironman 70.3 alongside her husband who was completing his first Ironman event, she said. Paulson, who races professionally, and was recovering from broken ribs and a broken collar bone that year, waited for her husband in the second transition zone after the bike course and did the entire run with him.

“That was a great experience … to have him do his first and be there with him every step of that run,” Paulson said.

Another highlight for Paulson was being able to earn professional or elite status at the 2015 St. George Ironman 70.3.

“The one year that I had a great race I was able to earn my pro card so that was special for me,” Paulson said.

Though both athletes have had special moments in different races, they both agreed that it is the challenge of the race that brings them back.

“I love the challenge of this course,” Paulson said. “It’s a challenge the entire time. That’s what Ironman is about is the challenge and that’s one of the reasons I keep coming back for more to St. George.”

Paulson has a relatively large social media following she hopes to inspire to have a healthy and fit lifestyle.

“Being capable of getting out here and doing an Ironman is not just because I’m blessed or I’m special, it’s because it’s something I want, and if you want it you can go and get it,” Paulson said adding that a person just needs to be dedicated enough and believe in themselves to go out there and get it, too.

Bruin shares Paulson’s thoughts on the challenge of the course and the dedication it takes to keep coming back. Bruin specifically mentioned the often difficult weather from cold water at the start to brutally hot temperatures toward the end of the run.

“But whatever challenge it is, everybody’s got to do it and you just do the best you can,” he said.

Bruin has been a member of the Southern Utah Triathlon Club since its inaugural year and said he hopes he has been a mentor and inspiration to other triathletes who are just starting out, as well as to his own children.

“I hope they can see that it is a hard thing to do,” Bruin said adding that the perseverance required to finish an Ironman event translates into life-lessons and facing hard challenges.

A decade of Ironman in St. George and beyond

On Thursday, just two days from the start of the 10th Ironman event in St. George, Ironman officials announced a five-year venue agreement with Washington County that will have the area hosting six Ironman and/or Ironman 70.3 races, including the 2021 Ironman 70.3 World Championship and the return of the full Ironman course in 2020 and 2023.

Having the full Ironman course back in St. George is something Paulson said she was really hoping would happen, in part because she feels the full Ironman distance plays to her strengths better but also because she wants redemption on the course where she took her first unsure Ironman steps.

“Those first three years I had no idea what I was doing so give me redemption, baby,” Paulson said.

Though Bruin has enjoyed the 70.3 distance, he said he feels like it is time to sign up for another full race in St. George.

Going into their 10th Ironman event in St. George Saturday, both Paulson and Bruin expressed some nervousness and fatigue but said they look forward to the camaraderie and the excitement that race day brings. As for the future, both racers said they hope to continue doing it for as long as they can. 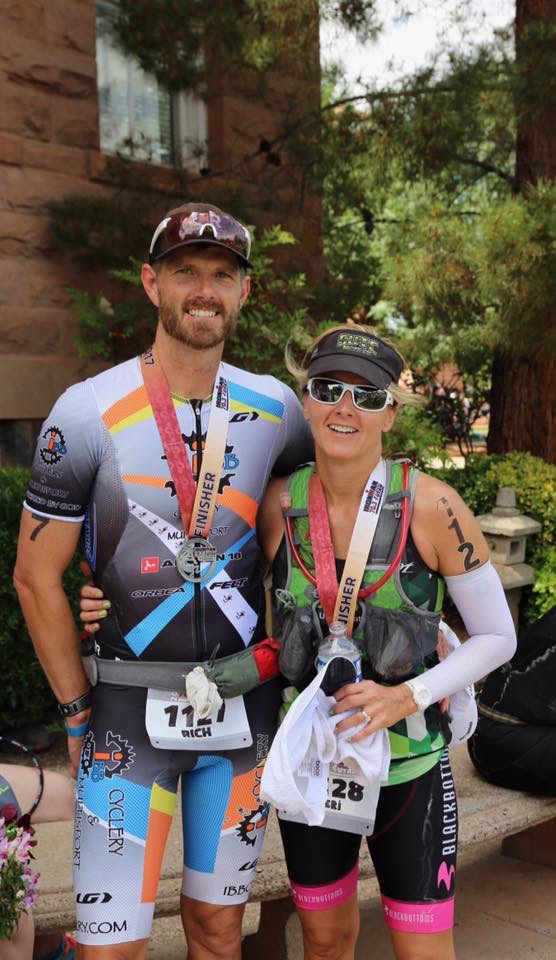 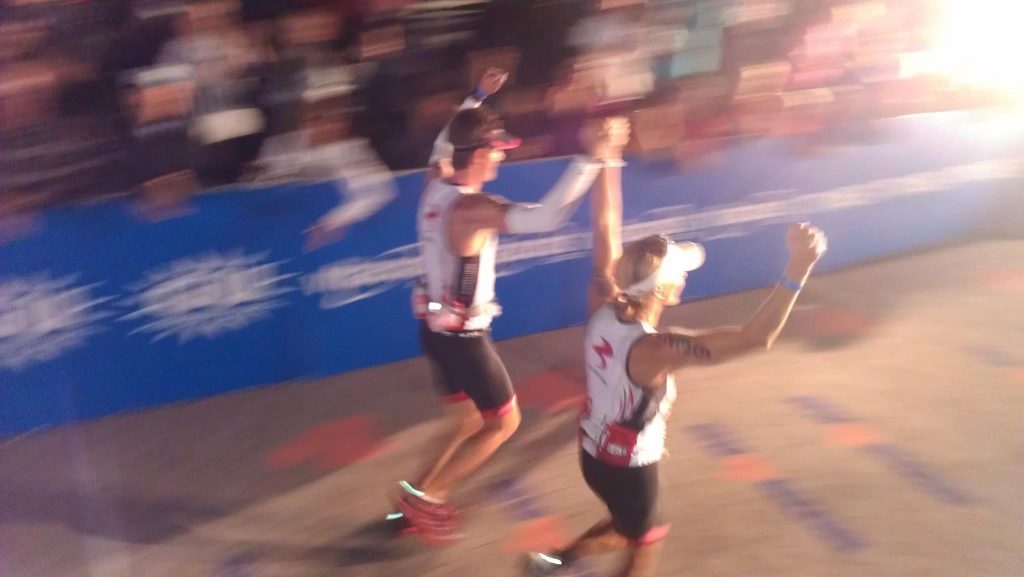 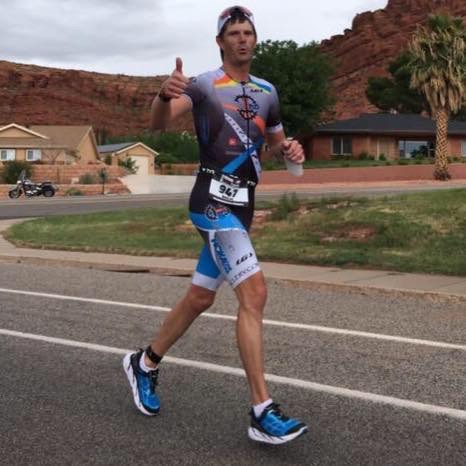 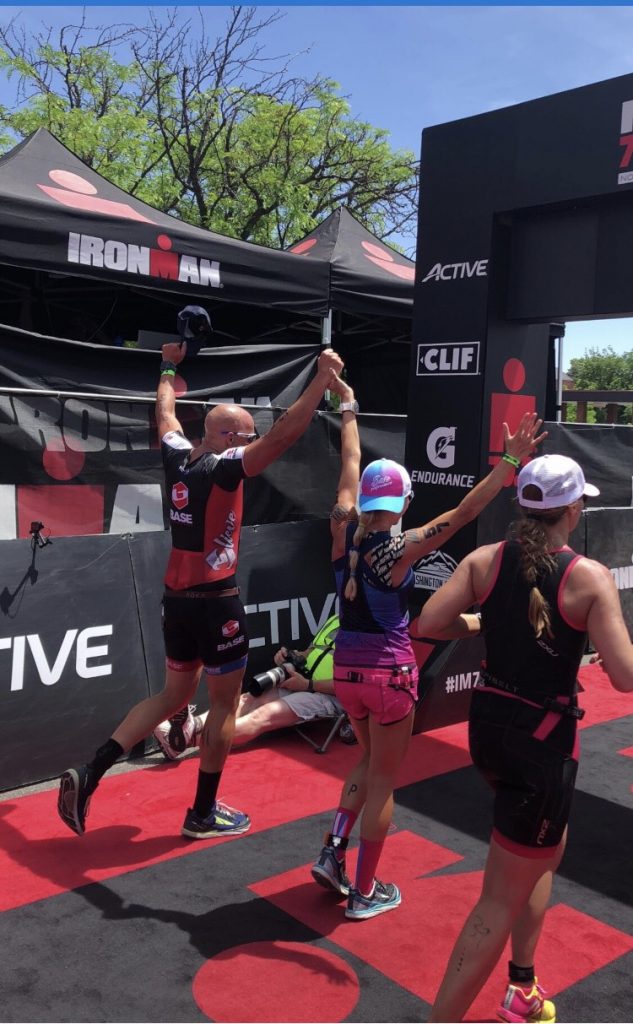 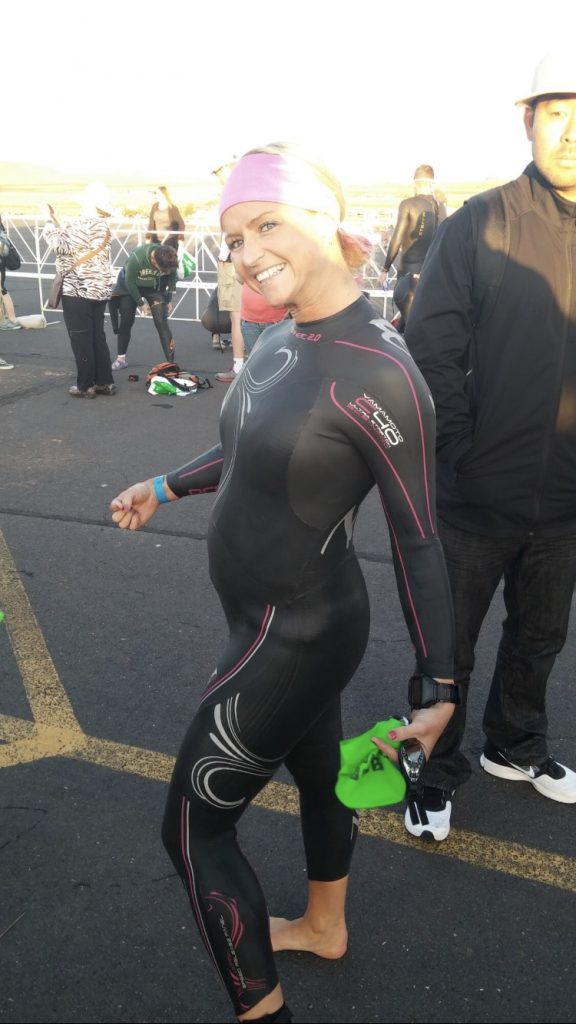 A pregnant Ashley Paulson gets set for the swim start of the 2014 Ironman 70.3 St. George, Hurricane, Utah, May 2014 | Photo courtesy of Ahsley Paulson, St. George News 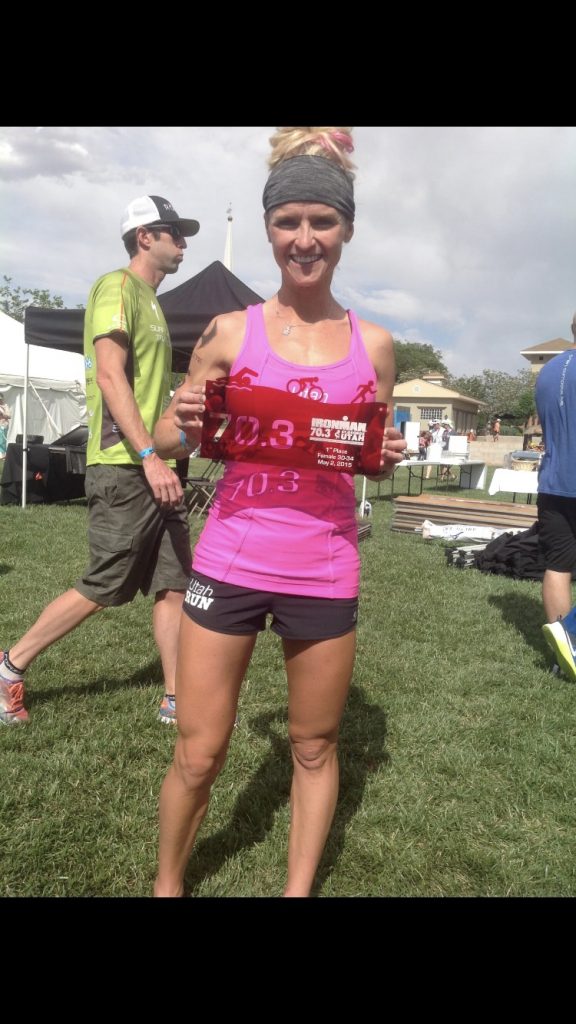 Ashley Paulson poses with the award she received for placing first female in her age group at the 2015 Ironman 70.3 race, St. George, Utah, May 2, 2015 | Photo courtesy of Ashley Paulson, St. George News

'We got Ironman': St. George gets the nod to host 2021 Ironman 70.3 World Championship; full Ironman returns