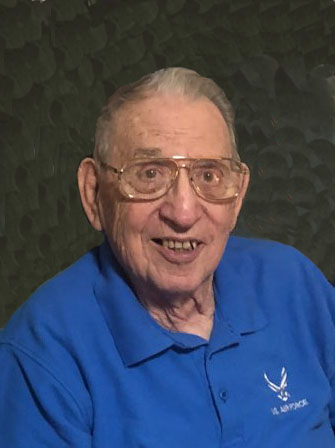 As a member of The Church of Jesus Christ of Latter-day Saints, Bill served in many church callings, Sunday School Teacher, Home Teacher, High Councilman and Bishop. His favorite calling was team teaching with his wife as a Primary Teacher. He served a mission with Mary in Lansing, Michigan, from 1996-1998.

During the Depression his father supported three families living under the same roof. He knew his cousins well.

He was an all-around athlete in track, football and especially basketball. The Peru, Indiana, high school Tiger Booster Club wanted to give him two baby tigers but his mother put her foot down and said no. He was greatly disappointed and talked about tigers the rest of his life.

He loved airplanes from early in his life, which helped him decide to join the Air Force in December 1950. He served in the Korean War until November 1953. His work in the military was classified. He claimed he drew posters for the officer’s club. Only recently the family found out he worked in NORAD and SAC.

After serving in the military Bill worked as an electrical engineer manager in the U.S. and Canada. He won awards for the electrical lighting on military runways. His career progressed though the Talos guided missile, communication radios used in the Vietnam War to the building division and purchasing division for The Church of Jesus Christ of Latter-day Saints. He retired in 1995. He loved fishing.

In lieu of flowers, please contribute to The Church of Jesus Christ of Latter-day Saints Humanitarian Fund or start paying your tithing, as he had a strong testimony of tithing and how it blesses your life. Bill will be greatly missed.