ST. GEORGE — What do people wear when they’re sexually assaulted or raped? Does it matter? And is it just women, or can men be victims as well? These were some of the questions raised at the second year of the “What Were You Wearing?” exhibit at Dixie State University.

In the case of Paul Lloyd, he was wearing one of his physical training uniforms for the National Guard: a long sleeve gray T-shirt and black athletic shorts.

Lloyd, a U.S. Army veteran and Salt Lake City resident, was four weeks into basic training when he was attacked and raped by four other men in 2007. Next to his outfit on display in the Holland Centennial Commons Building on the DSU campus lies a card with part of his story for the community to see.

“I had trusted these fellow soldiers and they betrayed that trust,” the card reads.

After his assault, Lloyd spent 14 days in the hospital and didn’t tell a soul about what happened to him. St. George News doesn’t typically name people who say they are victims of sexual assault unless granted permission, which Lloyd has given.

“I was unable to report it at the time because the ‘don’t ask, don’t tell’ policy was still in place,” he told St. George News, “and if I had reported that it had happened, I would have received a general discharge as an incompatibility issue.”

Lloyd wanted to be in the army his whole life and didn’t want his assault to ruin his career, so he didn’t say a word, even when people at the hospital frequently asked him what happened. After 10 months of enduring psychological pain and post-traumatic stress disorder from his assault, Lloyd said he could no longer deal with it and finally received an honorable discharge.

According to a report from the U.S. Department of Defense, 5,277 service members made a report of sexual assault in 2017 for an incident that occurred during military service — a 10 percent increase from the year before. Research also shows that more men are being sexually assaulted while serving than women.

Lloyd heard about Dixie State’s exhibit last year when he saw it on the news.

“I got in touch with Elizabeth (Bluhm) from the Dove Center and said, ‘Look, there’s not enough people coming forward from the military.'”

However, her hope is that this type of exhibit becomes obsolete.

“I would like to believe that this community is going to, you know, within a couple of years say, ‘Yeah, that’s old news. We know that. We don’t victim blame,'” Bluhm said. “I know we’re not there right now.”

In conjunction with Dixie State and the Women’s Resource Center, the Dove Center held an opening reception Monday afternoon, where students and community members came to listen to speakers and enjoy light refreshments.

Among those speakers were Cari Buckner, committee chair for the Women’s Resource Center; Tasha Toy, assistant vice president for campus diversity and Inclusion Center director; and Brianna Rogers, a victim’s advocate from the Dove Center.

Each speaker shared thoughts on why asking the question “What were you wearing?” perpetuates victim-blaming.

A somber mood prevailed as people stopped to look at the exhibit and read the cards next to each outfit. Lloyd drove from Salt Lake City to see his uniform and said seeing it has brought some closure for him.

“It’s there, and that’s a big step for me to come forward and put exactly what I was wearing,” he said. “It’s calming to me that I’m finally at a point where I can say it happened.”

It took five years for Lloyd to tell his family and friends what happened to him. He said it’s his hope that active duty military members, guardsmen, ROTC students and more will come forward about sexual assault.

“It’s better you come forward now then deal with it for five years. To hide something like that, to hide the brutal act that I endured for so long, it takes a toll.”

The exhibit will be on display outside of the Dixie State Library in the Holland through April 12 and in the lobby of the Eccles Fine Arts Center from April 15-19. 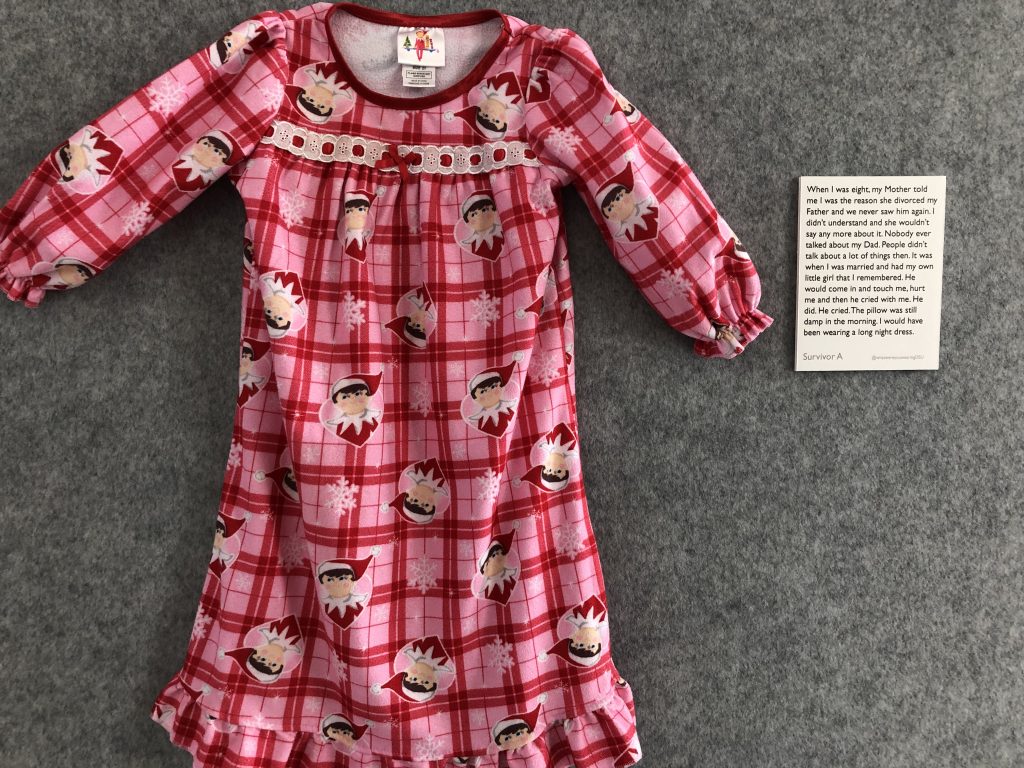 A dress on display for the "What Were You Wearing?" exhibit at Dixie State University, April 1, 2019 | Photo by Markee Heckenliable, St. George News 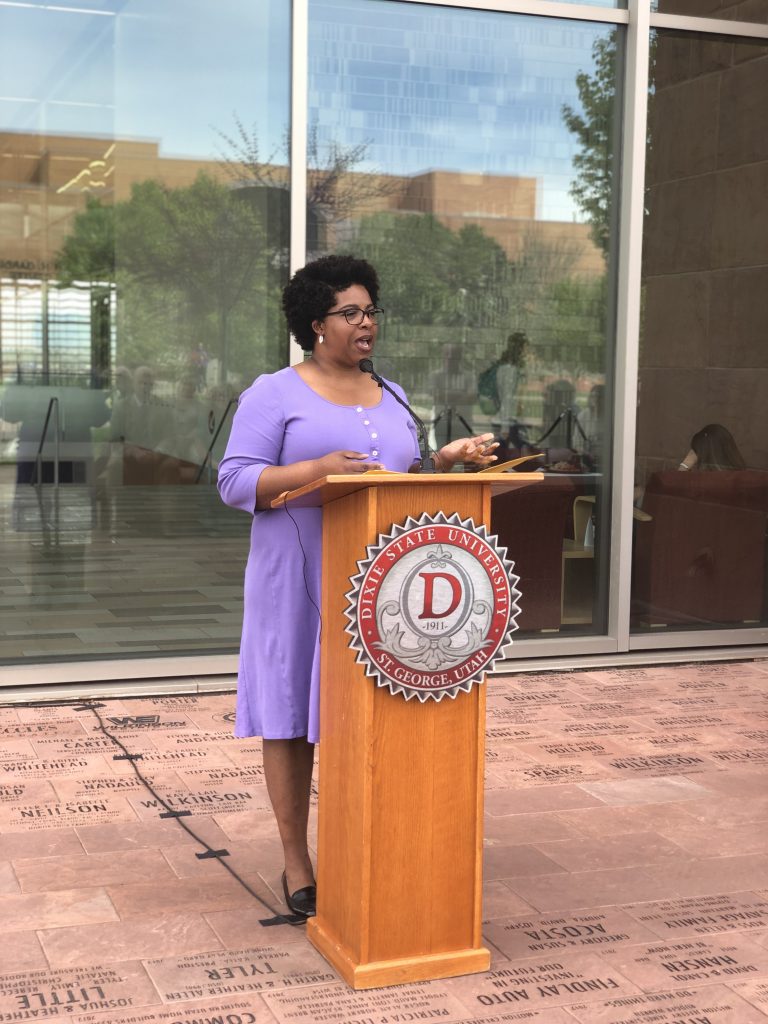 Tasha Toy, assistance vice president of campus diversity and Inclusion Center director, speaks at the reception for the opening day of the "What Were You Wearing?" exhibit at Dixie State University, April 1, 2019 | Photo by Markee Heckenliable, St. George News 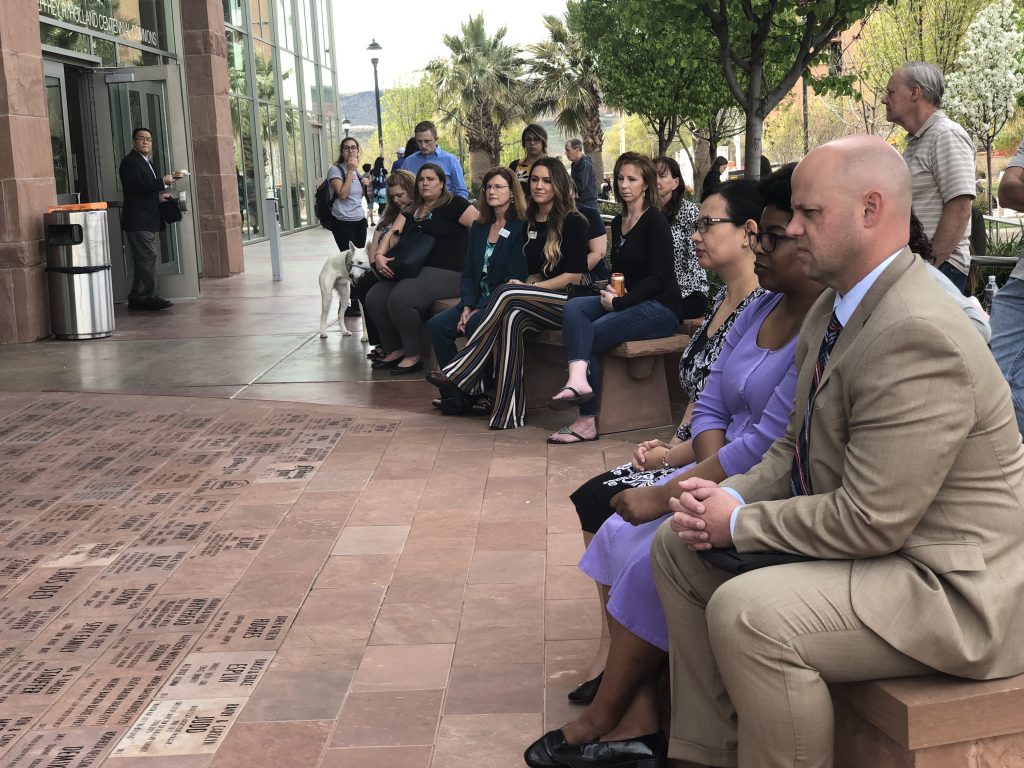 Audience members at the reception for the opening day of the "What Were You Wearing?" exhibit at Dixie State University, April 1, 2019 | Photo by Markee Heckenliable, St. George News 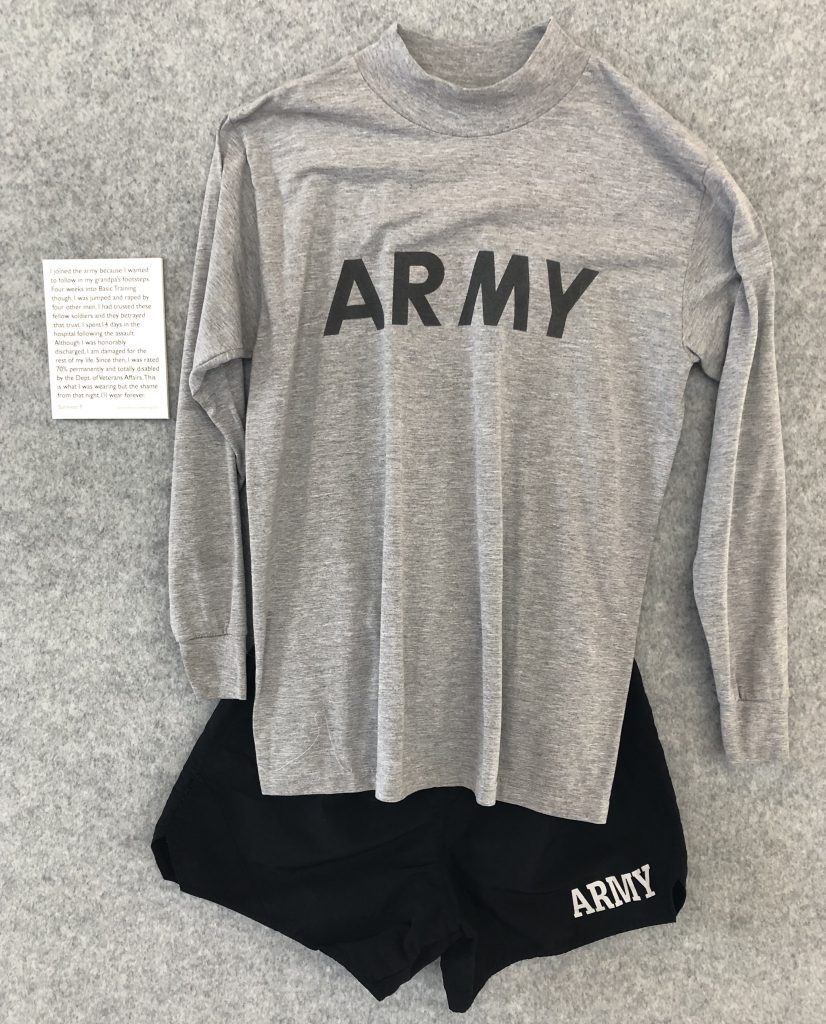 The outfit Paul Lloyd, a U.S. Army veteran and Salt Lake City resident, was wearing when he was attacked and raped by four other men on display at the "What Were You Wearing?" exhibit at Dixie State University, April 1, 2019 | Photo by Markee Heckenliable, St. George News 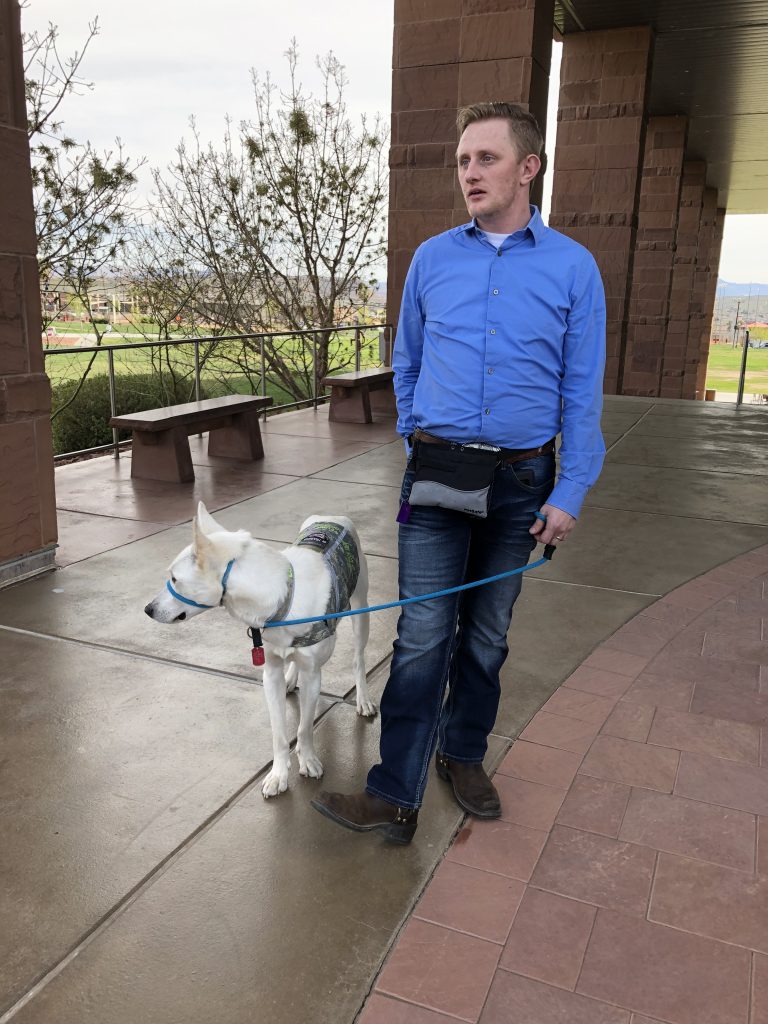