Updated March 9, 1:30 p.m. to include mention and brief results of Hurricane’s season opening win against Bear Lake, Idaho and other details.

In addition to the many new names and faces on the various rosters this year, there are four new head coaches in the Region 9 dugouts, as JR Robinson takes the helm at Canyon View, Justin Abbott takes over at Dixie, Chris Hurst moves into the head coaching position at Hurricane and Sheila Hamlin takes over as coach of the Pine View Panthers.

After nearly two weeks of preseason play, including games at various tournaments this weekend and next, the seven teams of Region 9 will officially start the regular season on March 19. That afternoon, Hurricane will host Canyon View, Cedar will host Dixie, and Pine View will host Snow Canyon, with Desert Hills having a bye.

In what proved to be a defensive game, Cedar and defending 3A champion Grantsville fought until the very last inning.

The Lady Reds snagged the win as they capitalized on the defense’s errors and got a walk-off double from sophomore Kelsi Oldroyd, ending with a 6-5 victory.

Although Cedar was the designated home team, the game was moved to Hurricane city fields, as Cedar’s home field was soaked with rain from the day before.

After great seasons by Cedar and Grantsville in 2018, both teams are aiming high this year. The Grantsville Cowboys were the 3A state champions, while Cedar went undefeated in winning Region 9 and ended up finishing fourth in the 4A tournament.

The game started off with both defenses getting three up three down in the first inning. Japrix Weaver, the junior Cedar shortstop who missed last season due to injury, played a crucial role, making stops not only in the first inning but throughout the game.

Grantsville got hot in the top of the second, scoring two runs. Cedar answered quickly by scoring one run in the bottom of the second, after junior Kylie Oldroyd reached base on an error and stole second. Senior Kenzie Waters stepped up and hit an RBI single to center field to score the run.

Neither team scored during the third, but Grantsville brought in two more runs in the fourth, The first three Cowboy batters got on base, leaving the bases loaded with sophomore Breana Hiatt at the plate. She connected with a strong hit to center field to bring in two of her teammates.

Kylie Oldroyd hit a triple for Cedar to start off the bottom of the third, but Grantsville’s defense managed to end the inning without Oldroyd scoring.

In the top of the seventh, Grantsville’s Laura Sandberg lasered one past the left fielder and made it to third base. Cedar focused in and held Sandberg at third, and finished the sequence with a strikeout by Waters, but Grantsville was still ahead 5-3 at that point.

Cedar showed fight in the bottom of the seventh, even after getting two outs right off the bat. The comeback began with Henkel belting a triple to the right field gap. Kylie Oldroyd followed with a grounder to the pitcher that resulted in an error, with Henkel scoring. Waters then hit a grounder, but another Grantsville error moved Oldroyd to third. Kelsi Oldroyd then stepped up to bat looking relaxed and determined, and hit her game-winning walk-off double in the right-field gap to score her older sister and Waters.

At Desert Hills Thursday, the Lady Thunder’s Lilly White hit a two-run homer with the score tied in the bottom of the seventh to defeat Springville 4-2. Teammate Addi Betts had driven in a solo homer in the sixth to give the Thunder a 2-1 lead, but Springville was able to tie the game up again in the top of the seventh. Kylee Christensen pitched the entire game for Desert Hills, allowing two hits and striking out three.

In their preseason opener at Canyon View on Tuesday, the Lady Falcons scored seven runs in the fourth inning to pull 10 runs ahead of Richfield. Senior pitcher Jordan Nielson went the full five innings for Canyon View, allowing four hits and striking out seven batters. She also had two hits and drove in a run.

On Friday, the Dixie Flyers kicked off the Jones Paint and Glass Spring Showdown, a two-day invitational tournament in St. George, with a 7-6 win over Las Vegas. The Lady Flyers trailed 6-5 in the bottom of the fifth and final inning when Kacee Griffin hit a two-run double to win the game. Chayden Chong was the winning pitcher.

At Pine View on Thursday, junior Sage Stoker hit a line drive single to right field with the score tied 9-9 in the bottom of the seventh, driving in the game-winning run against the American Fork Lady Cavemen. Pine View led 6-1 after two innings, but American Fork tied the game with a five-run rally in the fourth. Stoker was also the winning pitcher, going the full seven innings, allowing nine hits, striking out six and walking six. 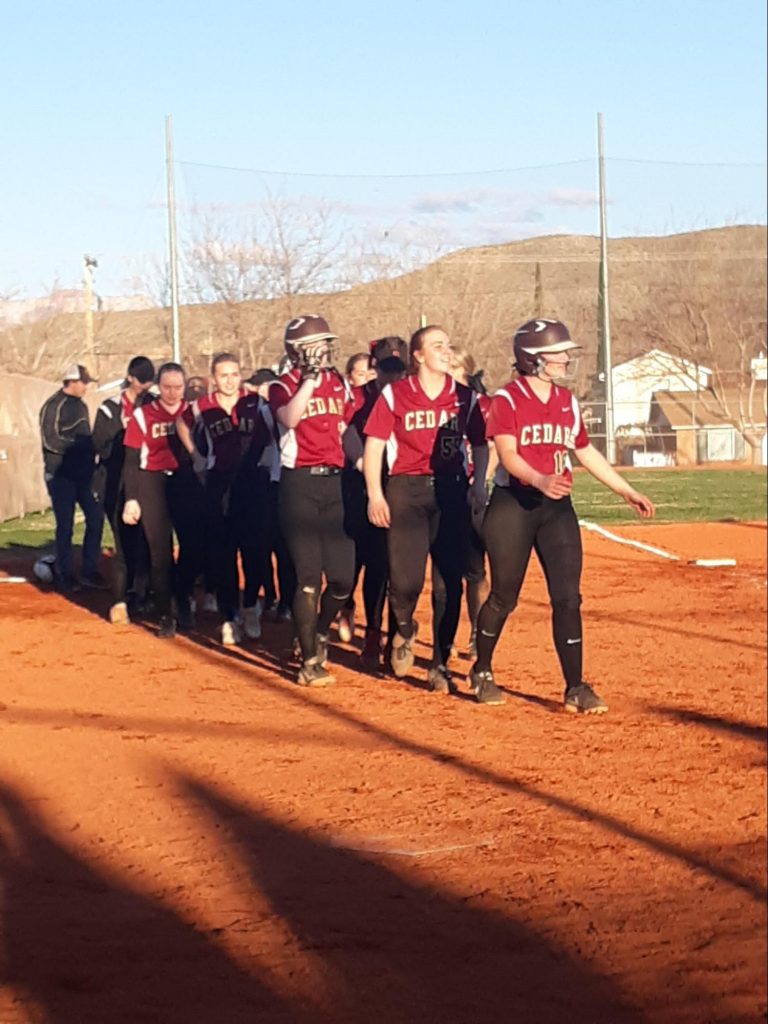 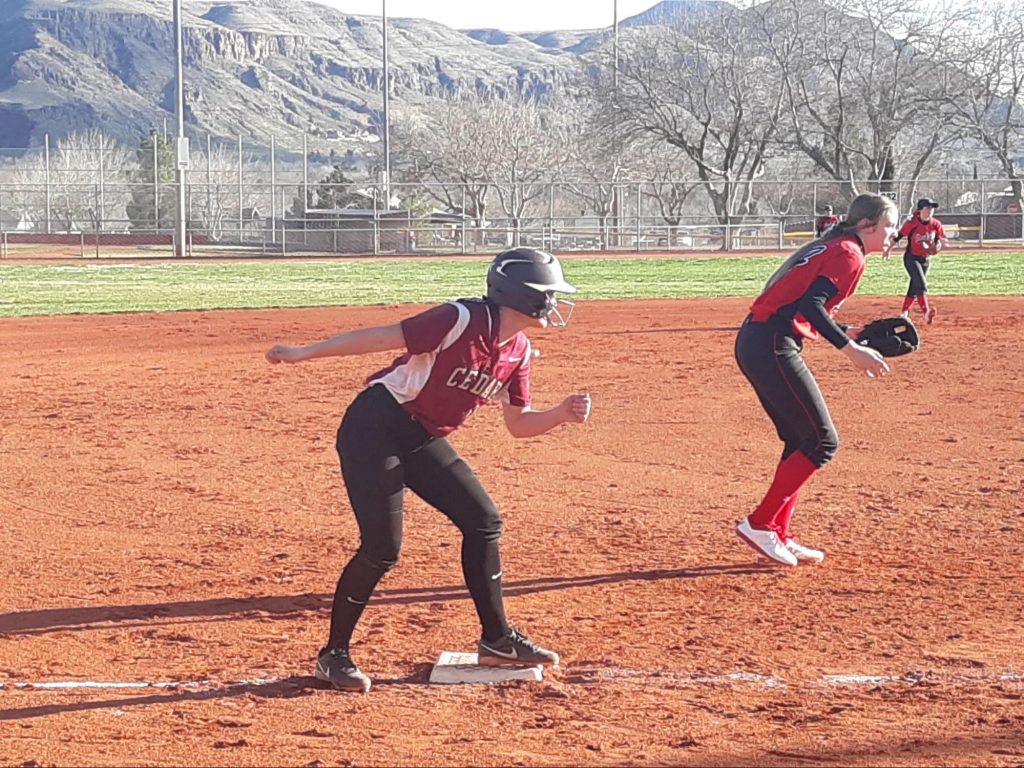 Kylie Oldroyd of Cedar is a baserunner at third base against Grantsville, Hurricane, Utah, March 7, 2019 | Photo by Megan Cafarelli for St. George News / Cedar City News 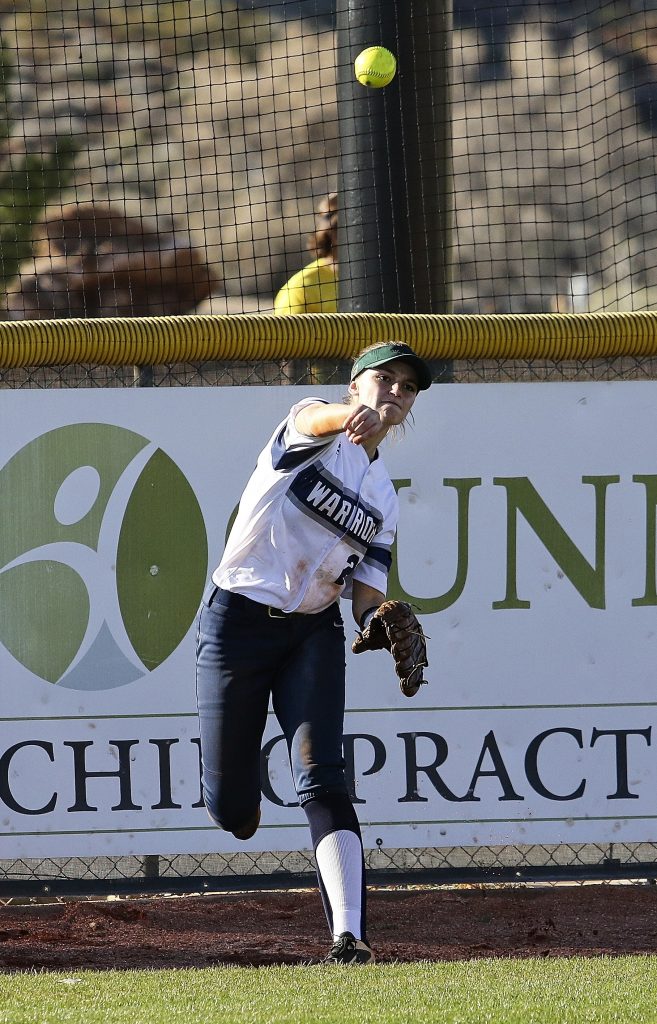 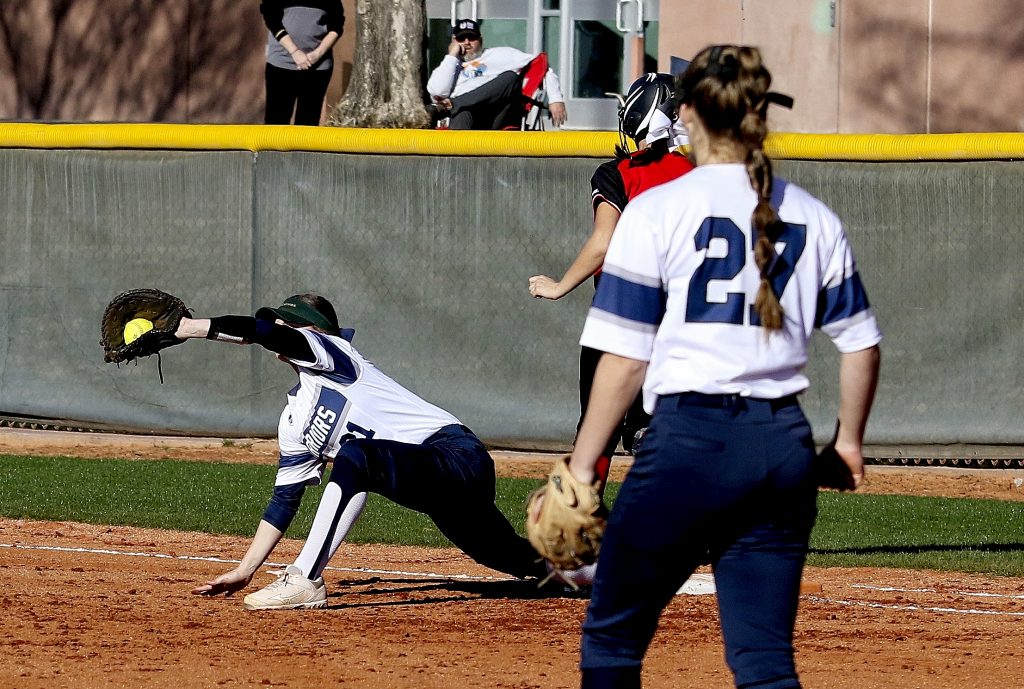 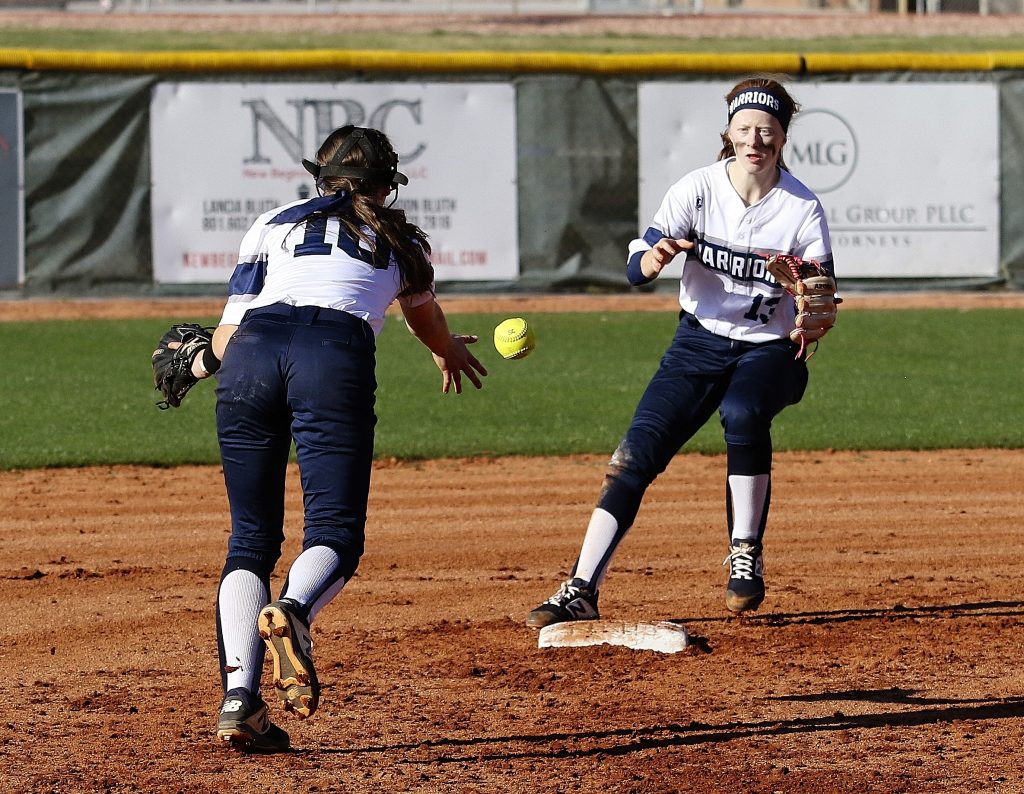 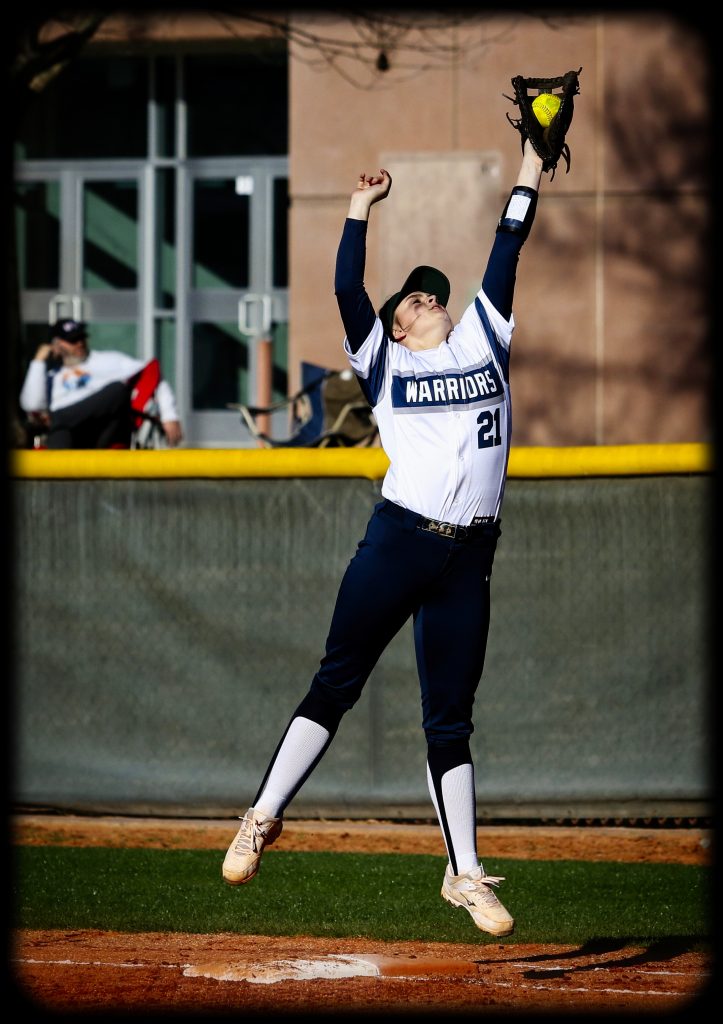 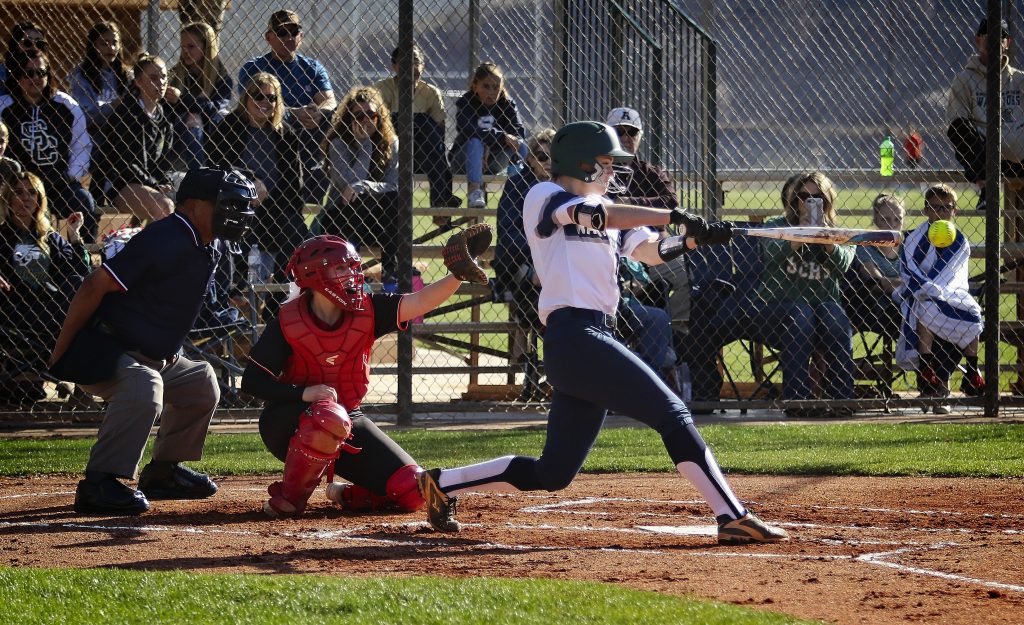