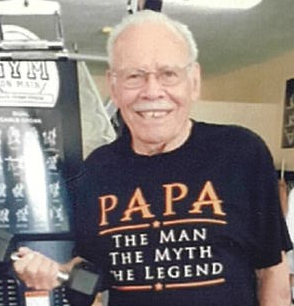 A memorial service will be held at 11 a.m. Wednesday, March 13, at Good Shepherd Presbyterian Church, 611 N. 2450 East, St. George, with Pastor Ralph Clingan officiating. Visitation will take place one hour before the service at the church.

Ken was born in 1925 in Toronto, Canada, son of James and Rose Trout. He was a World War II veteran serving in the Royal Canadian Navy as a radar operator. In 1952, he graduated as a doctor of veterinary medicine from Guelph University.

Immediately after graduation, Ken married Shirley Stovel, also of Toronto. They immigrated to the U.S. and became U.S. citizens.

Ken practiced veterinary medicine in Illinois and Nebraska and was also the director of research at a veterinary pharmaceutical company.

He was an ardent reader who enjoyed historical themes and action novels. Ken enjoyed all sports, playing hockey in his youth, and family activities such as water and snow skiing, fishing and was also an avid golfer. Ken supported his children in all their endeavors, including sports. Ken was a big fan of the Nebraska Cornhuskers football team, holding season tickets for over a decade.

After retiring in 1989, he and Shirley traveled the country full-time in their fifth-wheel for approximately three years. Ken and Shirley had been married 53 years when Shirley passed away in 2005.

In 2006, Ken married Jan Smith and they resided in Hurricane, Utah until they moved to St. George in 2018. Jan and Ken loved to play bridge and enjoyed the company of their friends. Jan greatly enriched Ken’s life for over 13 years.

Family and friends are invited to sign his online guestbook at Spilsbury Mortuary online.