A truck is destroyed in a single-vehicle rollover on SR-59 in Washington County, Utah, Feb. 20, 2019 | Photo courtesy of the Utah Highway Patrol, St. George News

ST. GEORGE — A driver was transported to the hospital with multiple injuries Wednesday after a single-vehicle crash on state Route 59 near Hurricane that was set in motion by a blind curve and suspected alcohol impairment.

At 6 p.m. emergency personnel were dispatched to a rollover on SR-59 near mile post 17 approximately one mile east of Sheep Bridge Road involving a red 2001 Toyota Tundra pickup truck.

The 50-year-old driver was found with multiple injuries and was transported to Dixie Regional Medical Center by ambulance to be treated for two fractured ribs, a bruised or possibly collapsed lung and an injury to her collarbone.

Adams said troopers detected the smell of alcohol while interacting with the driver before transport.

At the time of the crash the Tundra was heading west on SR-59 and approaching a blind curve the driver lost control of the truck as it veered to the left and into oncoming traffic before it rolled “at least once, possibly more,” Adams said.

“That truck was so damaged that it appears to have rolled more than once, but it’s hard to say at this point,” he said.

A Mohave County Sheriff’s deputy traveling through the area was the first to come upon the crash seconds after it happened, Adams said, and rendered aid to the driver until UHP troopers could get there.

A significant factor in the crash and one that possibly saved the driver’s life was that she was properly restrained when the rollover occurred.

“I’m confident that the outcome would have been very different had she not be seat belted into her vehicle during the rollover,” he added.

Traffic was backed up for miles after the crash and remained stopped in both directions until the wreckage was cleared from the roadway. The Tundra was destroyed in the rollover.

The driver was admitted to the hospital and later cited for having an open container of alcohol and DUI, Utah Highway Patrol Trooper Grant Hintze said. 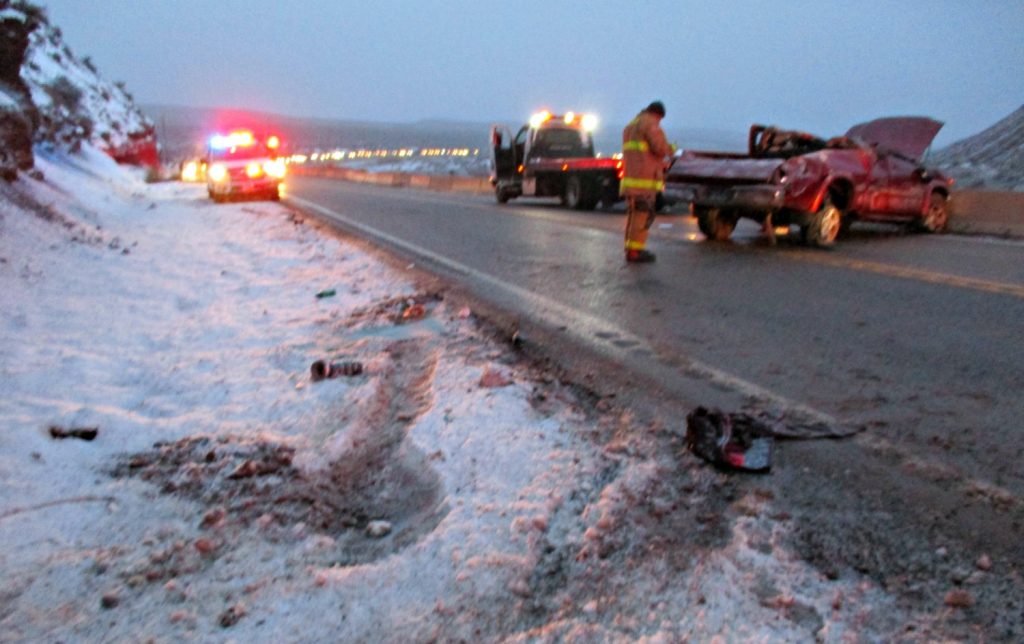 A traffic backup extending for miles can be seen in the background after a single-vehicle rollover on SR-59 in Washington County, Utah, Feb. 20, 2019 | Photo courtesy of the Utah Highway Patrol, St. George News 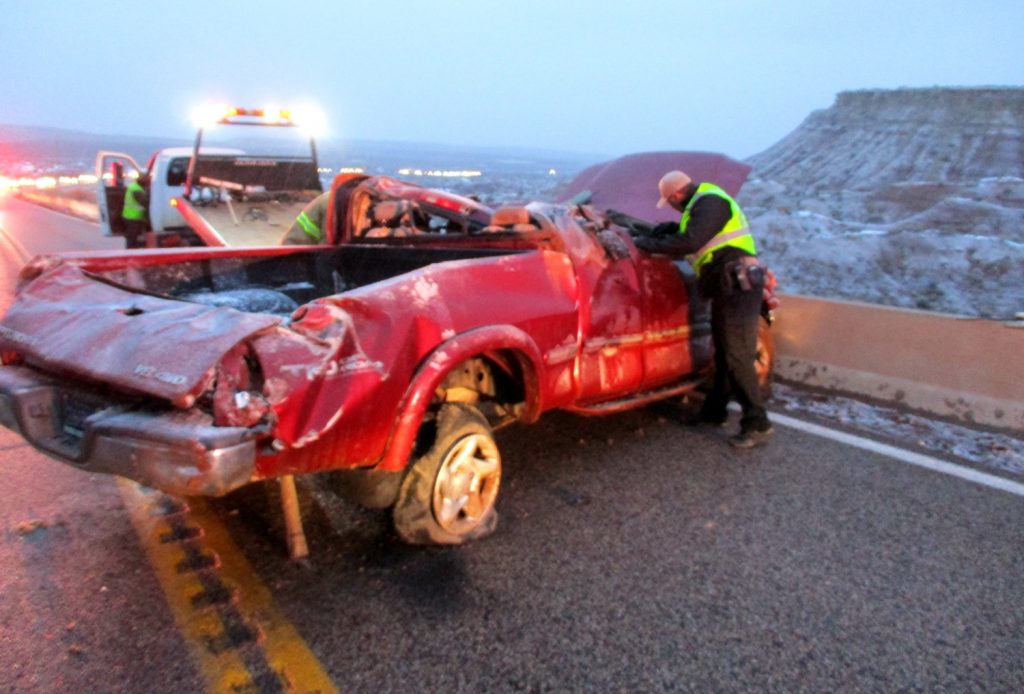 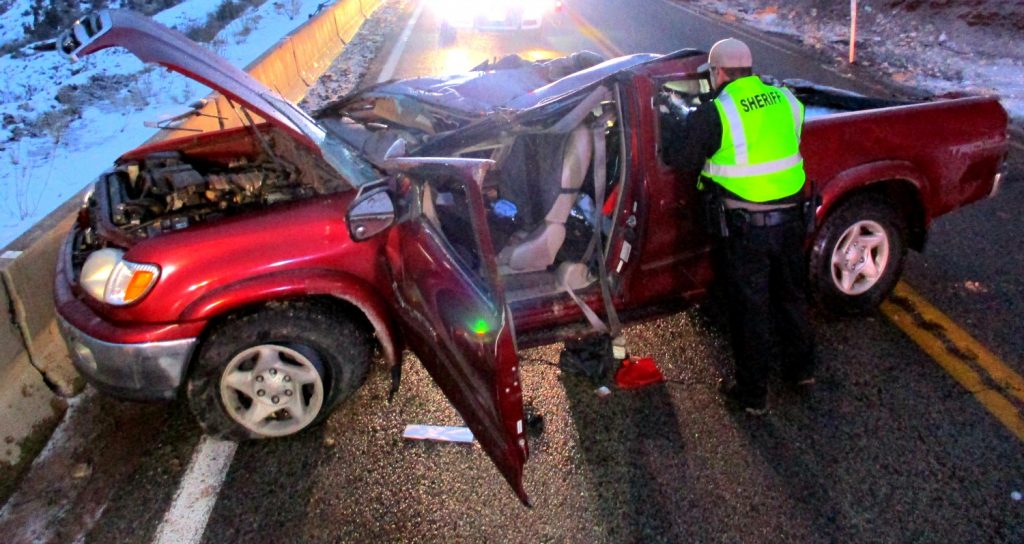 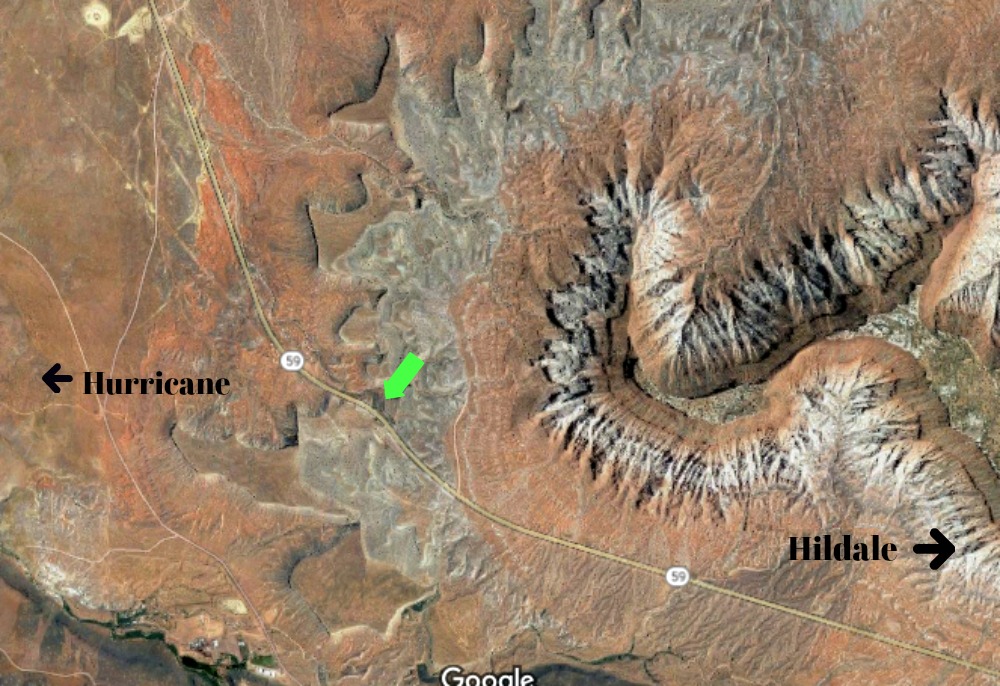 Police: Driver suspected of DUI crashes into ambulance near Ephraim