A truck and trailer lie on their side on southbound Interstate 15 after a crash that injured both the driver and passenger, Washington County, Utah, Jan. 13, 2109 | Photo by Cody Blowers, St. George News

WASHINGTON COUNTY — A truck-trailer rollover on Interstate 15 Sunday morning sent two people to the hospital and triggered a traffic backup that extended as far as the eye could see.

Shortly before 11 a.m., emergency personnel were dispatched to the crash on southbound I-15 less than a mile from the Black Ridge Exit near mile marker 37 involving a silver Dodge pickup truck pulling a full-size camping trailer and a second smaller trailer with a side-by-side ATV attached directly behind.

Responders arrived to find the pickup tuck and utility trailer overturned and blocking both southbound lanes, while the side-by-side landed on the northbound side of the freeway next to the median.

The passenger had escaped the vehicle, but the driver was still trapped inside. Firefighters worked quickly to free the driver from the cab of the truck.

“Several other drivers stopped and got the passenger to the shoulder and were giving her aid. She had several cuts and lacerations from the crash,” Utah Highway Patrol Sgt. Jake Hicks said.

The passenger was transported by ambulance to Cedar City Hospital, and once extricated, the driver followed in a second ambulance.

Two dogs were also in the vehicle at the time of the rollover but were uninjured, Hicks said.

The southbound side of the freeway was initially blocked until troopers were able to divert traffic onto the outside shoulder to alleviate the backup, which by then extended for more than two miles.

At the time of the crash, the Dodge was southbound on the interstate when one of the trailers became unstable near mile marker 38, which destabilized the second trailer and caused the driver to lose control of the truck as it was being whipped around by the trailers.

The driver attempted to pull to the right to regain control of the truck and then overcorrected to the left, causing the truck and trailer to flip over onto their side.

During the rollover, the ATV disconnected from the second trailer and continued sliding another 50 yards before it flipped over the median and landed upside-down on the northbound side where it came to rest against the concrete barrier.

“Fortunately the concrete barrier performed as it was designed and prevented the side-by-side crossing in to northbound traffic,” the Utah Department of Public Safety said in a statement about the crash.

Traffic was impeded for more than two hours while emergency crews loaded the trailer onto a wrecker and continued clearing the wreckage from the roadway.

Hicks said the the responders were working in “very cold, frigid temperatures.”

“Everyone worked out there for hours,” he said.

Northbound traffic was also impeded for a short period while a wrecker towed the ATV from the roadway.

The exact cause of the crash is still under investigation, but Hicks said that if a trailer is loaded with too much weight, it can create a scenario where the speed of the trailer exceeds the speed of the vehicle towing it, which causes it to become unstable.

While that situation may not apply to this particular crash, hicks reminds drivers to be aware of the capabilities of their vehicles. He advises drivers to check load weights and to make sure trailers are connected correctly and loads are properly secured.

“As always, it’s important that drivers travel at speeds suitable for the vehicle they are traveling in, the road they are on and the traffic they encounter,” the DPS statement reads.

This report is based on statements from police and may not contain the full scope of findings. 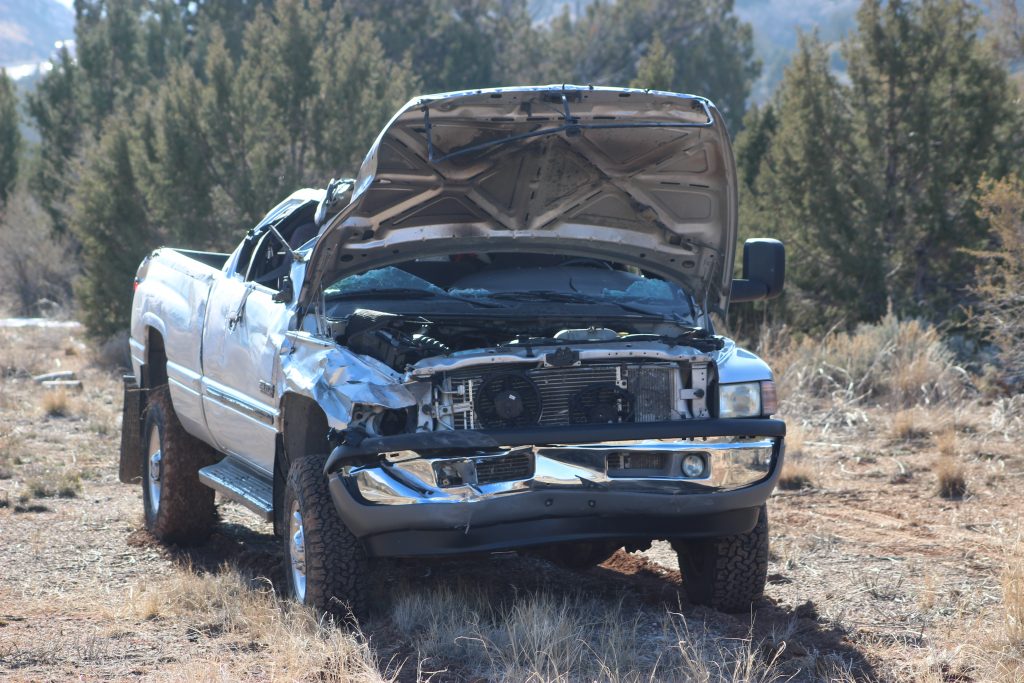 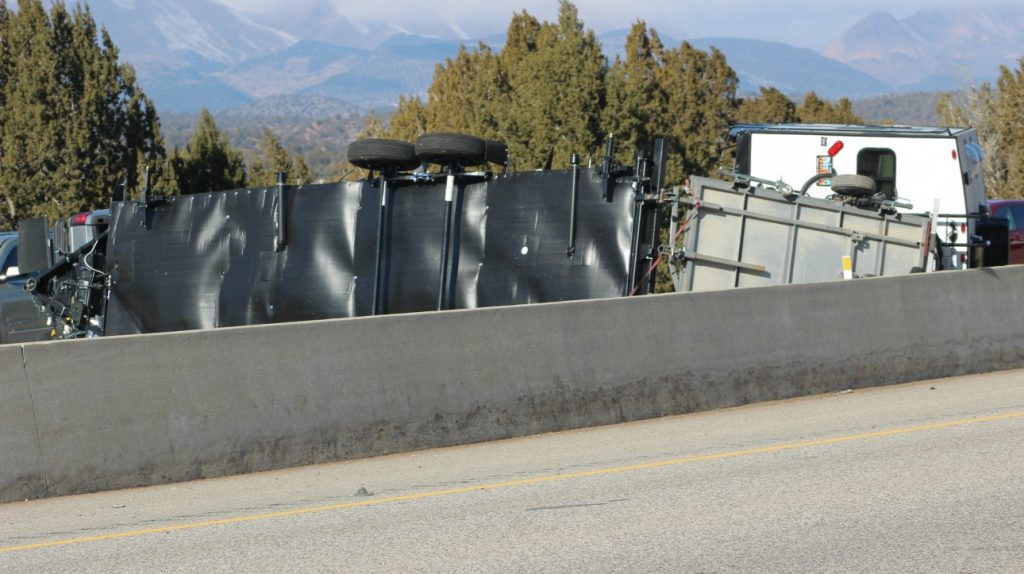 A trailer can be seen overturned from the northbound side of I-15 after a crash that injured two people, Washington County, Utah, Jan. 13, 2109 | Photo by Cody Blowers, St. George News 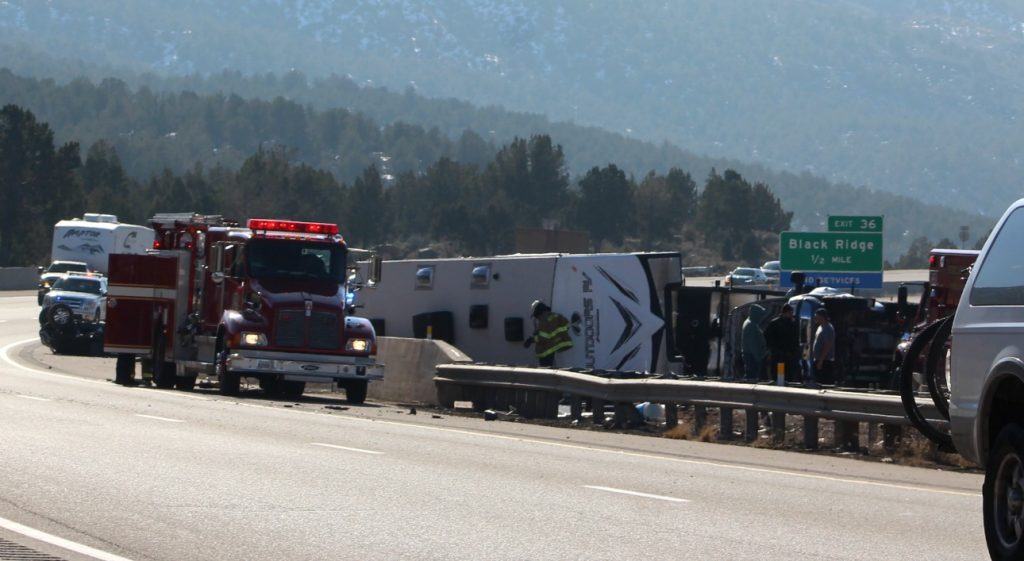 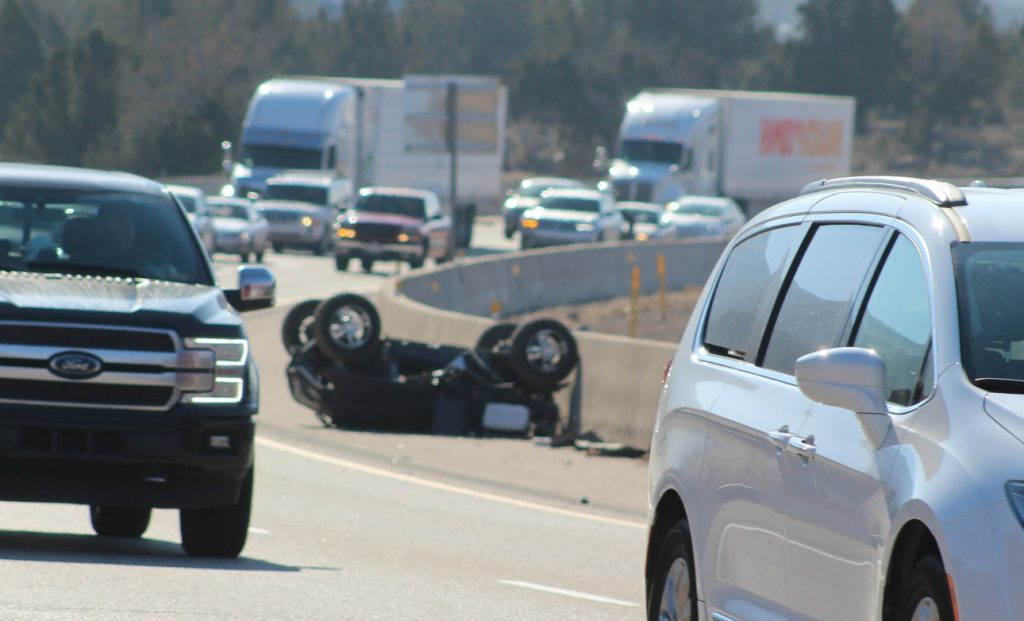 A side-by-side ATV lies upside-down after falling out of a trailer during a crash on southbound Interstate 15 near mile marker 37, Washington County, Utah, Jan. 13, 2109 | Photo by Cody Blowers, St. George News 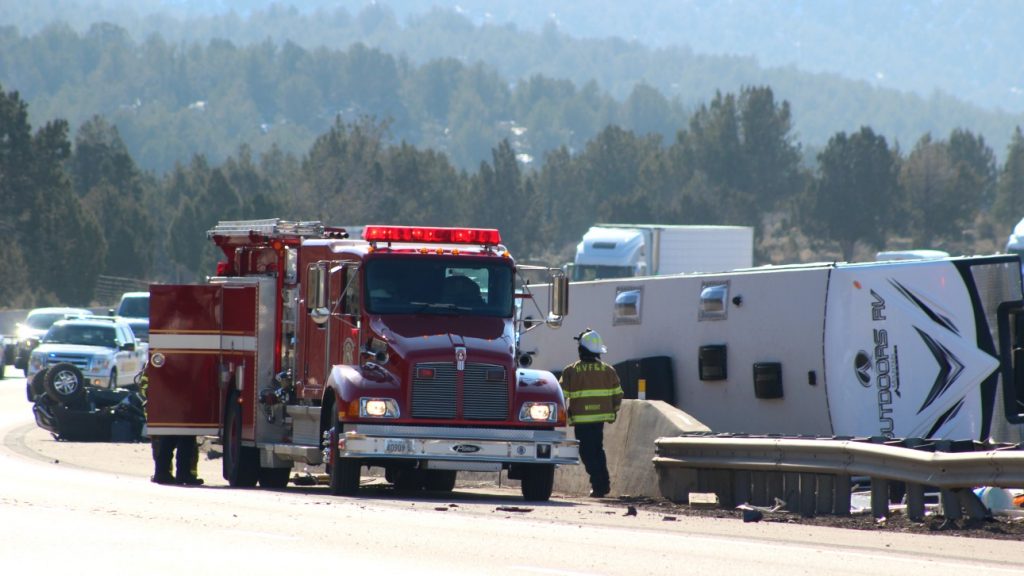 Southbound traffic is stopped as both lanes are blocked after a pickup truck and trailer flipped over on Interstate 15 near mile marker 37, Washington County, Utah, Jan. 13, 2109 | Photo by Cody Blowers, St. George News 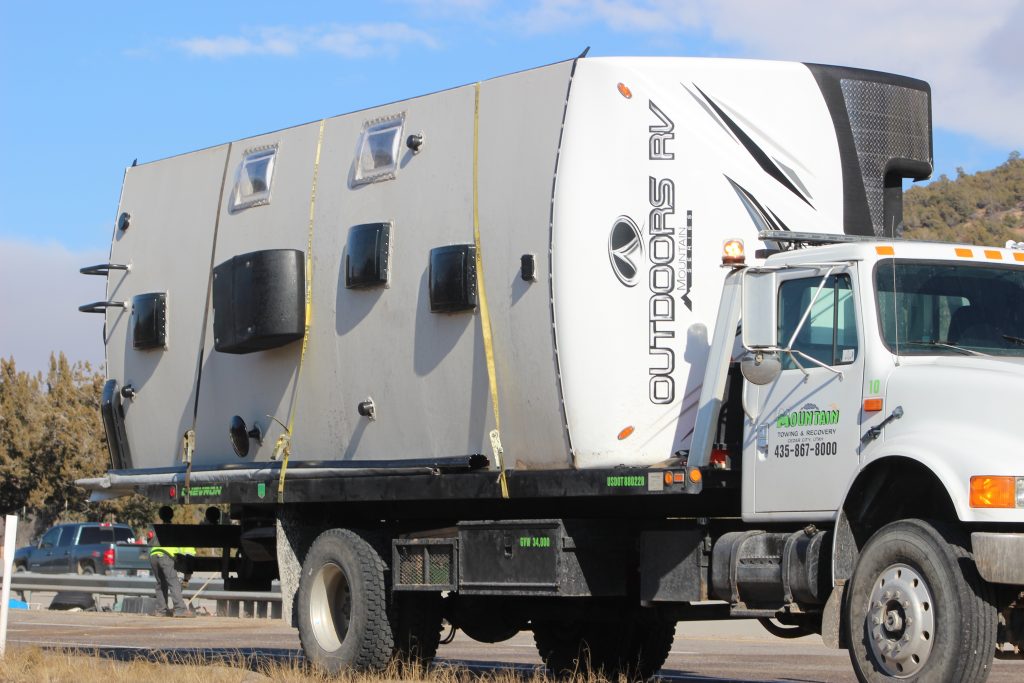 A trailer is loaded on its side and towed from the roadway after crash on southbound Interstate 15, Washington County, Utah, Jan. 13, 2109 | Photo by Cody Blowers, St. George News

Truck rips up 25 feet of guardrail on I-15 in the Gorge, triggers second crash injuring 2