ST. GEORGE — The main objective of a cloud-to-ground lightning bolt is to find the path of least resistance as it journeys through miles of air to the ground, even if that means going through an extension cord to do so – as was the case when a house in Logandale, Nevada, was struck by lightning Wednesday night. As the monsoon season descends on the region, now is an ideal time to implement measures to increase safety and reduce lightning-related damages.

Every year, more than 20 million cloud-to-ground lightning flashes are detected throughout the U.S. with roughly 5-10 times as many cloud flashes, according to the National Severe Storms Laboratory.

One of those strikes hit a tree in Logandale Wednesday night, and the bolt’s convoluted journey that followed was outlined by homeowner, Bryan Linford, who was at home when the lightning struck.

First, he said, a thunderstorm rolled into the area, triggering a power outage. Linford’s son went around the home and began unplugging various electronic devices to protect against a possible lightning-related power surge.

“I had no idea he was even doing that until later,” Linford said. “Thankfully, he did so because those items were the only things left undamaged.”

Less than five minutes later, a lightning bolt struck a 15-foot tree located just feet from the residence in Linford’s backyard, triggering a convoluted journey of energy that left extensive damage in its wake.

The cloud-to-ground lightning strike traveled down the trunk of the tree and continued through an extension cord lying inches from the trunk, Linford said. After blowing out the pool pump, the current continued across the yard where it struck a chain-link fence.

At the fence, the lightning bolt branched out into two currents, with one current continuing on its path down the extension cord into the residence, while the second current continued down the chain-link fence.

The current traveled into the home where it fried multiple circuit boards and wiring to the garage door opener, refrigerator, computer router and the fiber optic box before burning through wiring, phone jacks and piping.

Meanwhile, the current traveling down the chain-link fence arched at the handle and then continued on until it struck a pile of wood and set it on fire before it was quickly extinguished by the torrential downpour.

Linford was surprised at the damage, he said, adding that the home is equipped with ground fault interrupters, outlets designed to cut off the power supply any time there is even a slight variation in current. This happens within milliseconds to protect against the risk of electrocution, particularly in areas where there is more moisture, such as a kitchen or bathroom.

A ground fault occurs whenever electricity escapes the confines of the wiring in a light fixture, appliance or power tool and takes an alternate path to the ground. When that path is through the human body, extensive tissue damage and death can result.

The amount of damage to the home was mitigated thanks to Linford’s son’s initiative in unplugging several things, like the TV, the Xbox and other devices.

“More importantly, no one was injured,” Linford said.

Lightning is a giant spark of electricity in the atmosphere between clouds, the air or the ground caused by static electricity created when water and ice move around inside the cloud. The ice and water is forced up by warm air currents, and pushed downward by gravity which compresses it, creating static electricity, similar to rubbing on a balloon.

See video at the top of this report for footage of a recent thunderstorm in St. George courtesy of Brooklyn Jordan.

Every thunderstorm produces lightning, which is one of the oldest observed natural phenomena on earth. It is also a leading cause of weather-related injury and death, as thunderstorms can trigger powerful 50 mph winds, hail, flash flooding and even tornadoes, according to the Department of Homeland Security’s Ready.gov website.

What does lightning do?

Linford’s experience supports the fact that most houses are filled with many potential routes for lightning to follow, including gas and water pipes, electric lines, phone lines, cable or internet lines, electric appliances and metal window frames. Three of the most common lightning-related hazards in the home

Fire, power serge damage and shock wave damage are three of the most common lightning-related hazards in the home. Lightning can ignite building materials while passing through them, and most lightning-related residential fires typically start in the attic. Power surge damage is caused by lightning’s explosive surge of current, sufficient enough to destroy anything connected to the power source.

The explosive shockwave created by lightning is what produces the sound of thunder and can fracture concrete, brick, cinder block and stone with ease.

Lightning is also one of the top three storm-related killers in the U.S. Every year, on average, more than 50 people are killed and hundreds more are injured by lightning. The highest number of deaths and injuries take place during the summer months when people are outdoors in the afternoon and evening.

Emergency preparedness can be key to protecting life and property and can mitigate potential losses during severe weather events using the following safety tips from Ready.gov:

Preparing for a thunderstorm

Tips to stay safe during a thunderstorm

During a thunderstorm, it is best to avoid the locations where lightning can strike, which is basically anywhere outdoors. Instead, stay inside. A sturdy building is the safest place to be during a thunderstorm. Pay attention to weather reports and warnings of thunderstorms, and be ready to change plans if necessary.

Avoid flooded roadways, as it only takes six inches of fast-moving water to knock an individual down, and one foot of moving water can sweep a vehicle away. If a storm hits when boating or swimming, get to land and find a sturdy, grounded shelter or vehicle immediately.

Avoid taking a shower, washing hands or any activity that includes water. Refrain from typing on a computer, playing video games or using a wired phone, tool or appliance. It is safe to use cell phones, remotes or other wireless devices.

Unplug all power, telephone, router and antenna connections during a thunderstorm. Surge protectors will stop voltage spikes and surges but can’t provide protection against the catastrophic burst of current from a close lightning strike.

Additional safety tips and resources can be found at Ready.gov. 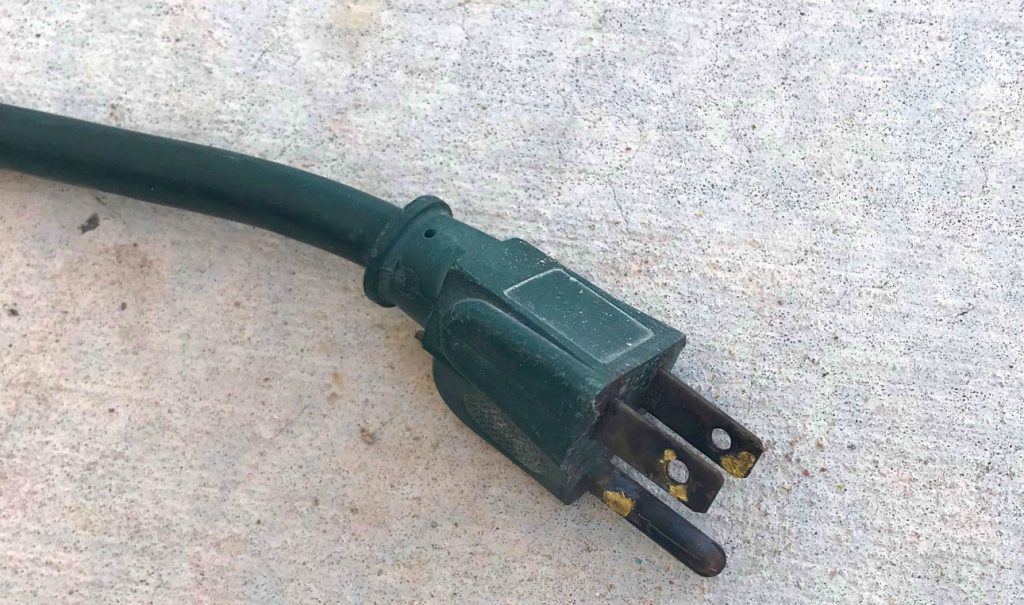 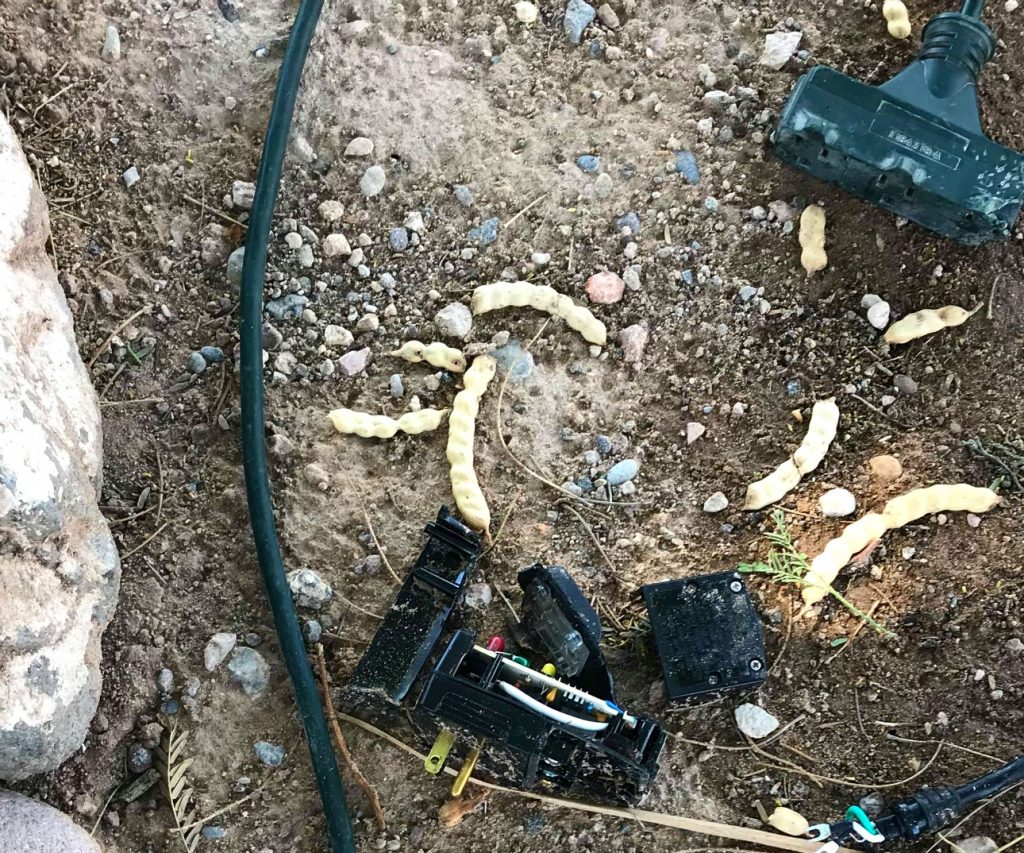 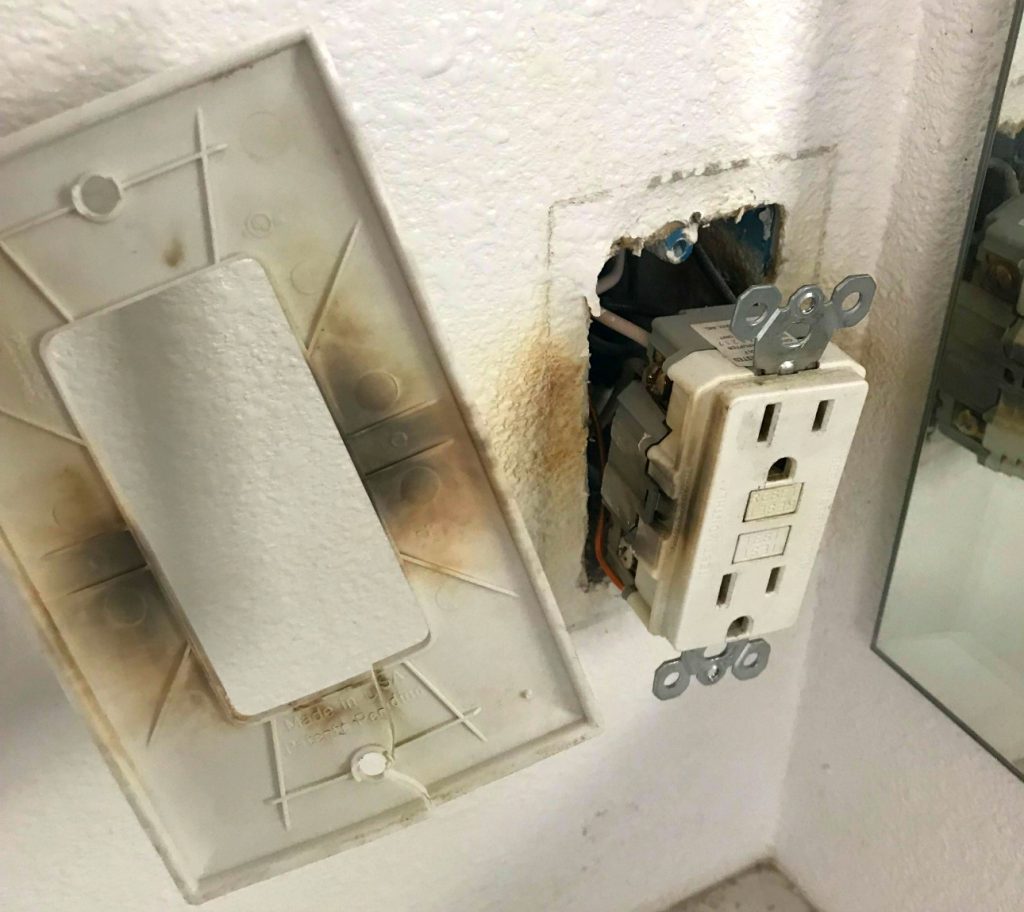 An electrical outlet with ground fault interrupter is blown out by a lightning bolt during a storm in Logandale, Nev., July 17, 2018 | Photo courtesy of Bryan Linford, St. George News 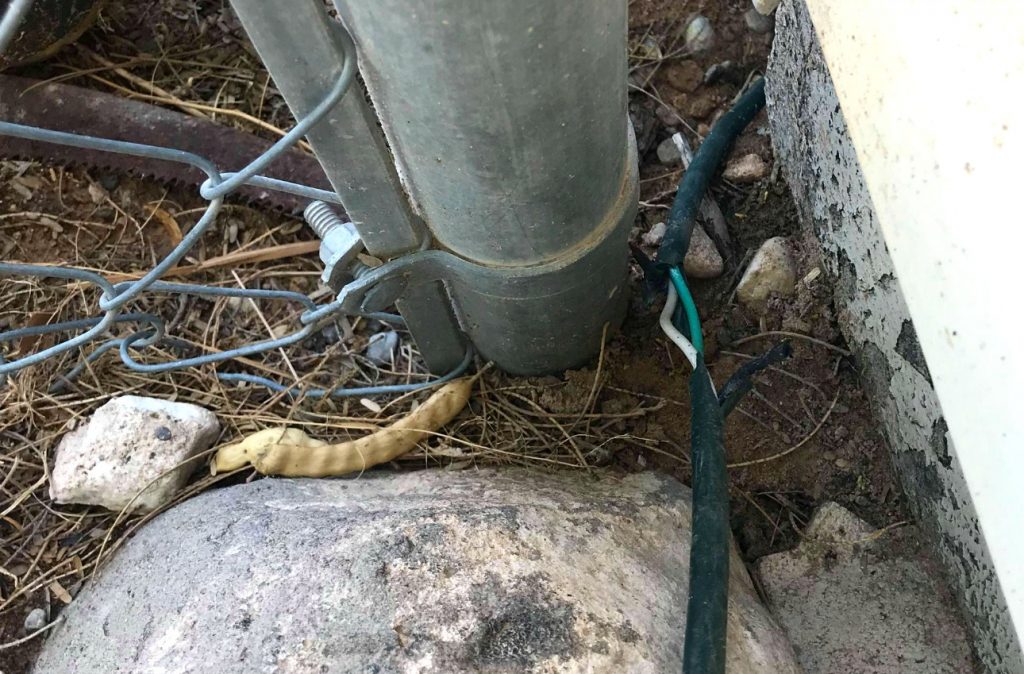 Chain link fence where a lightning bolt melted an extension cord and jumped to the fence during a storm in Logandale, Nev., July 17, 2018 | Photo courtesy of Bryan Linford, St. George News 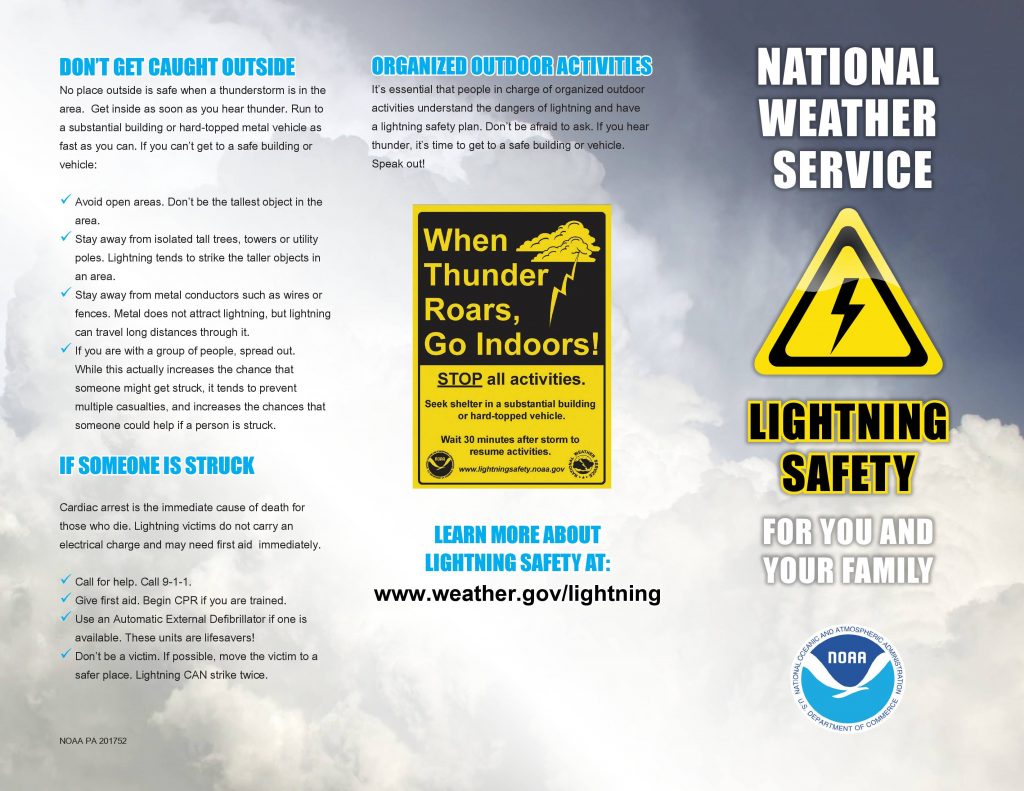 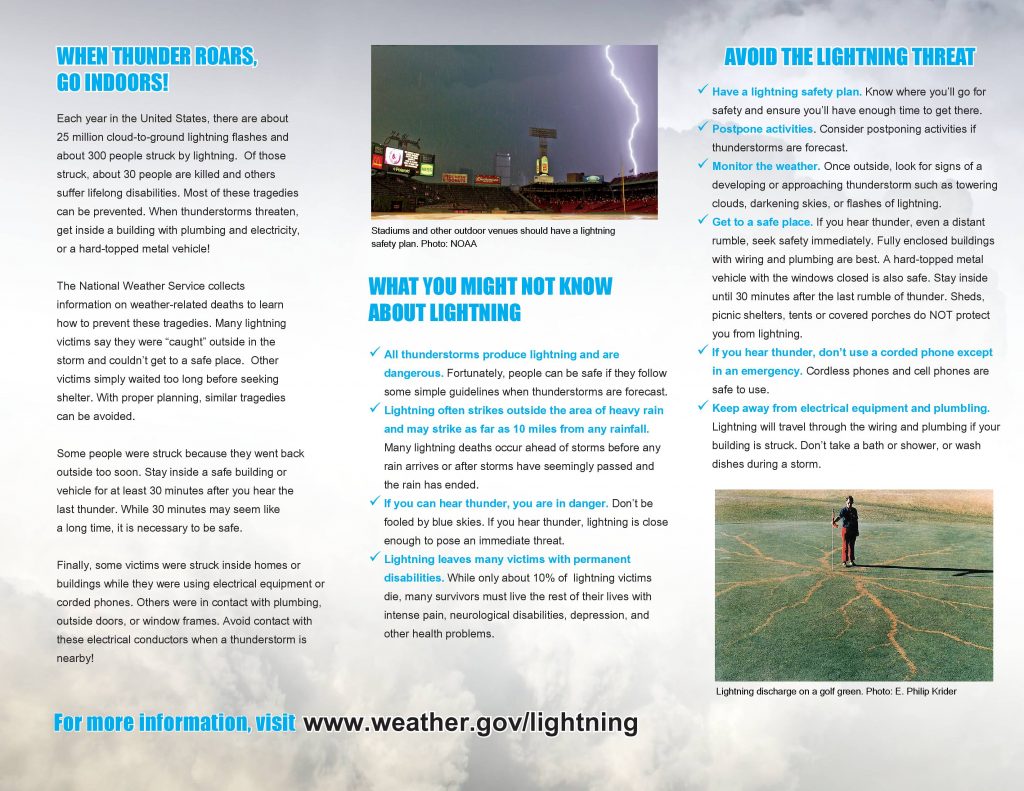 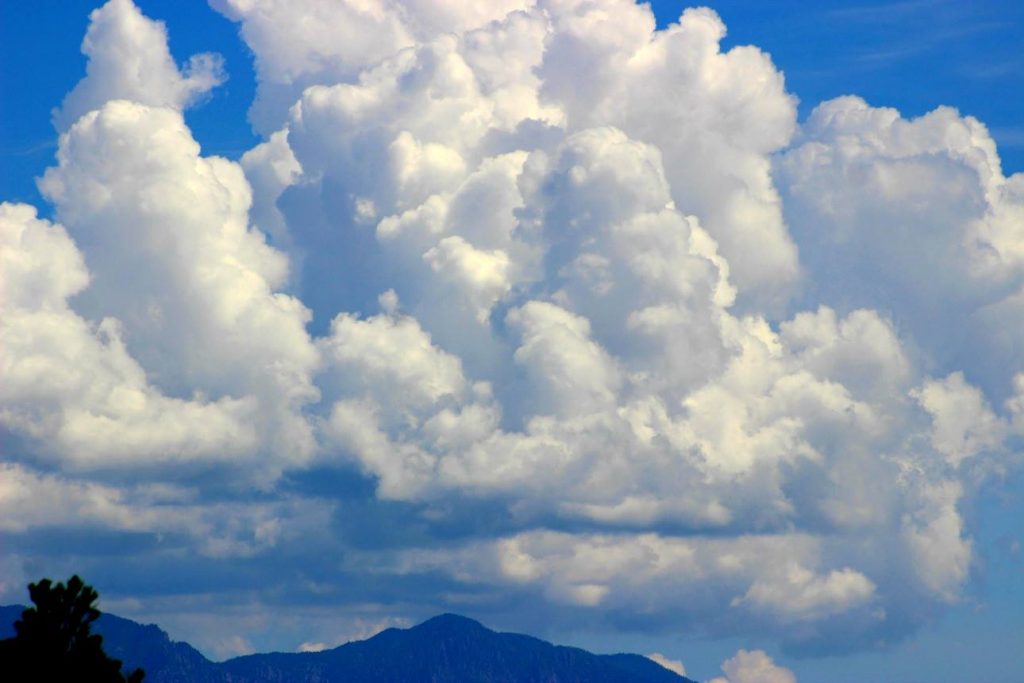 Man transported to hospital after being struck by lightning while golfing