ST. GEORGE — Aircraft dropping retardant on the West Valley fire were grounded Thursday morning due to a “near miss” with a drone, further impeding fire suppression efforts in red flag conditions across southwest Utah.

The U.S. Department of Forestry reported that aircraft were flying near New Harmony when the drone flew into the “no-fly zone,” immediately halting all aerial suppression efforts on a fire that has grown to nearly 12,000 acres and is now 20 percent contained.

All aircraft were ordered to land and were grounded for nearly two hours until the airspace was cleared, Brian Reublinger with the U.S. Forest Service and public information officer for the West Valley fire said, adding that those hours would have been better spent dropping water and retardant.

Reublinger added that it comes down to safety, of both the firefighters and civilians on the ground as well as of those involved in operating the aircraft.

“For anyone who flies a drone in a protected zone, just know you are putting firefighters’ lives at risk.”

The National Interagency Fire Center says that drones can interfere with air tanker dropping retardant, helicopters making water drops, as well as with aircraft used to deploy smoke jumpers who parachute into remote areas, which typically occur at or below 200 feet above the ground – the same altitude most drones fly.

Even a tiny drone can cause a serious or fatal accident if it collides with firefighting aircraft, according to the agency.

Firefighting aircraft will typically land if drones are spotted near a wildfire due to safety concerns, which prolongs firefighting operations and allows the fire to grow larger while the planes are grounded and unable to drop fire retardant or water, monitor wildfires from above or even provide tactical information to firefighters.

Under Utah law, drone operators face potential misdemeanor and felony charges depending on the level of mayhem their drone may cause in a wildland fire zone. According to Dixie National Forest officials, interrupting fire suppression operations by flying an unmanned aircraft is a second-degree felony.

Despite the interruption, firefighting efforts have slowed the progress of the fire through efforts on the ground, aerial attack aircraft and backfire operations, which is a method of indirect attack typically used against rapidly spreading fires, enabling crews to hold the fire line amid red flag conditions that can fuel extreme fire behavior, according to updated information released Thursday morning.

The Dixie National Forest and Interagency managers announced Thursday afternoon that fire restrictions have been upgraded to Stage 2 level due to extreme fire danger conditions as well as an increase in the number of human-caused fires reported throughout southwest Utah and the Arizona Strip Tuesday.

Under a special order that will be in place until further notice, there are no fires allowed in the forest of any kind. Only the use of propane stoves are allowed in designated areas.

Thursday’s update on the Willow Patch Fire, 9 miles east of Richfield, said it is about 60 percent contained. The human-caused blaze has consumed 4,583 acres, lower than previous estimates due to more accurate mapping.

“Due to rugged terrain, travel times and critical objective of full suppression, direct attack being initiated where feasible,” according to the update issued by Utah Department of Natural Resources fire information officer Beth McClanahan. “Current resources are on track to meet the target of full suppression. The fire behavior is minimal. Isolated torching within interior islands, continued creeping within the Mahogany fuel types.”

All roads leading into the fire will require a fire personnel escort to ensure firefighter public safety.

The fire has burned about 6,000 acres in Iron and Beaver counties and was 98 percent contained, according to an update issued Wednesday afternoon by Nick Howell, Black Mountain Fire information officer.

It was the final update unless “significant changes occur.”

Located three miles south of Minersville, the fire was caused by a vehicle accident. 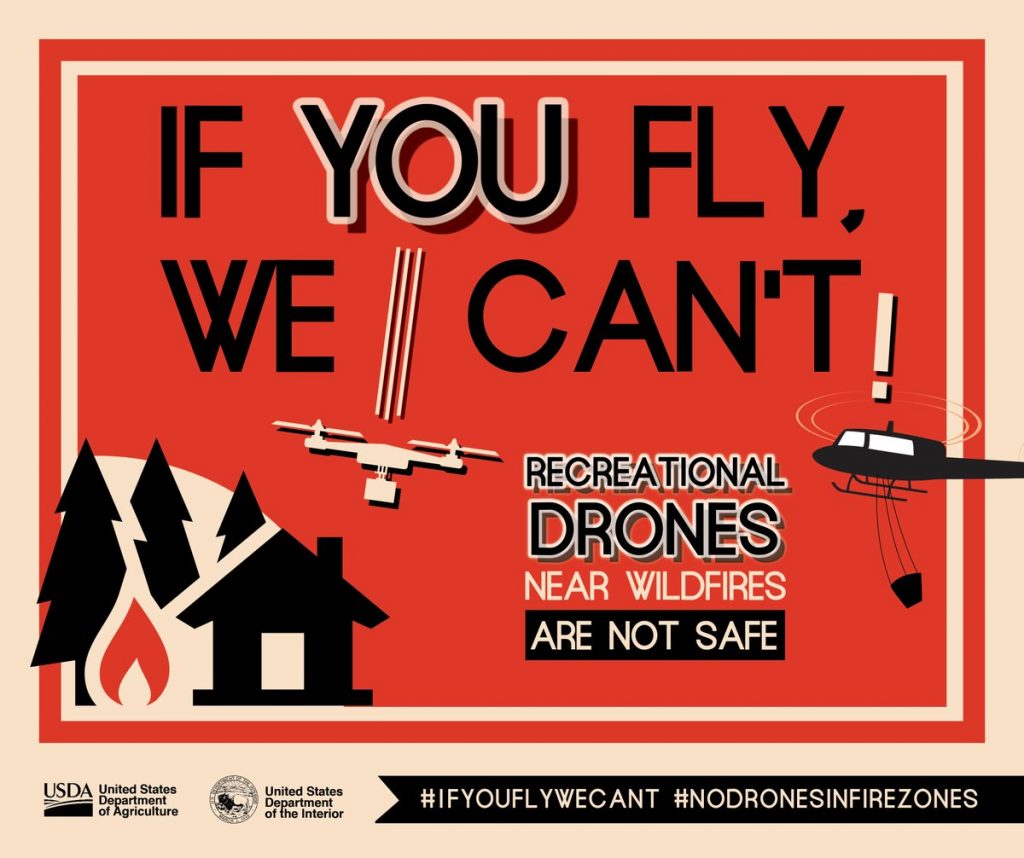 Poster depicts a warning that when drones are flying near wildland fires all aircraft are then grounded, Washington County, Utah, July 5, 2018 | Image courtesy of Dixie National Forest, St. George News 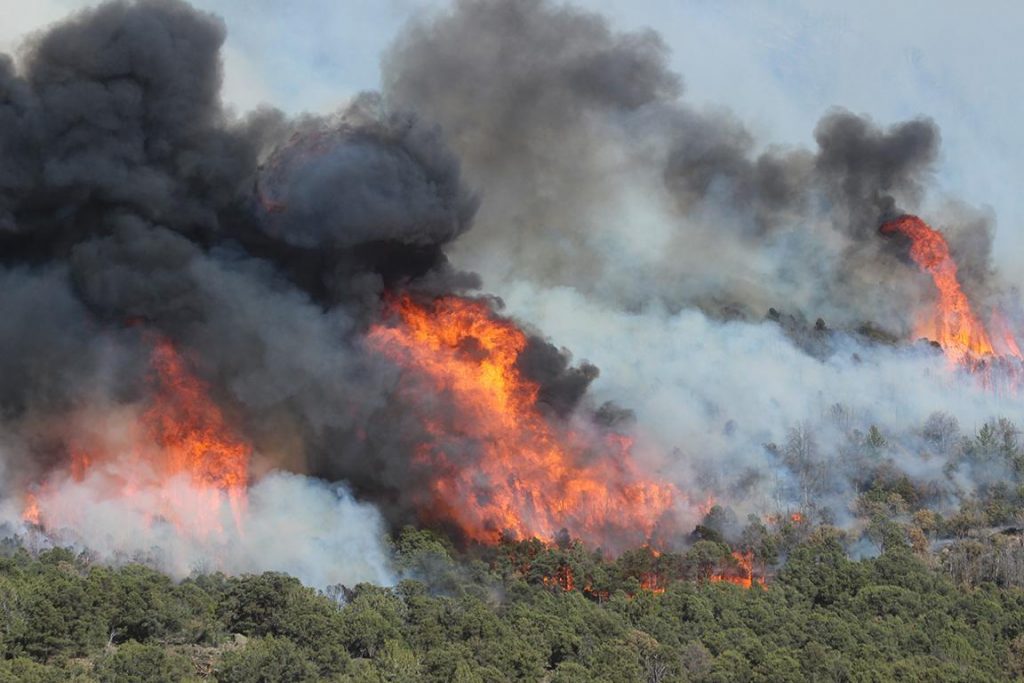 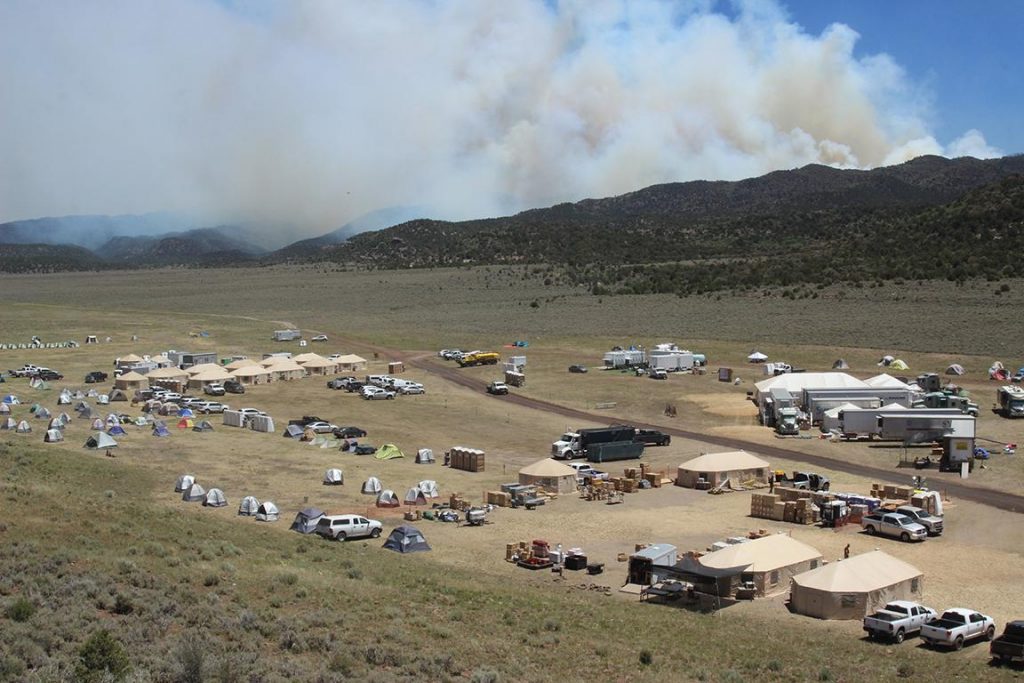 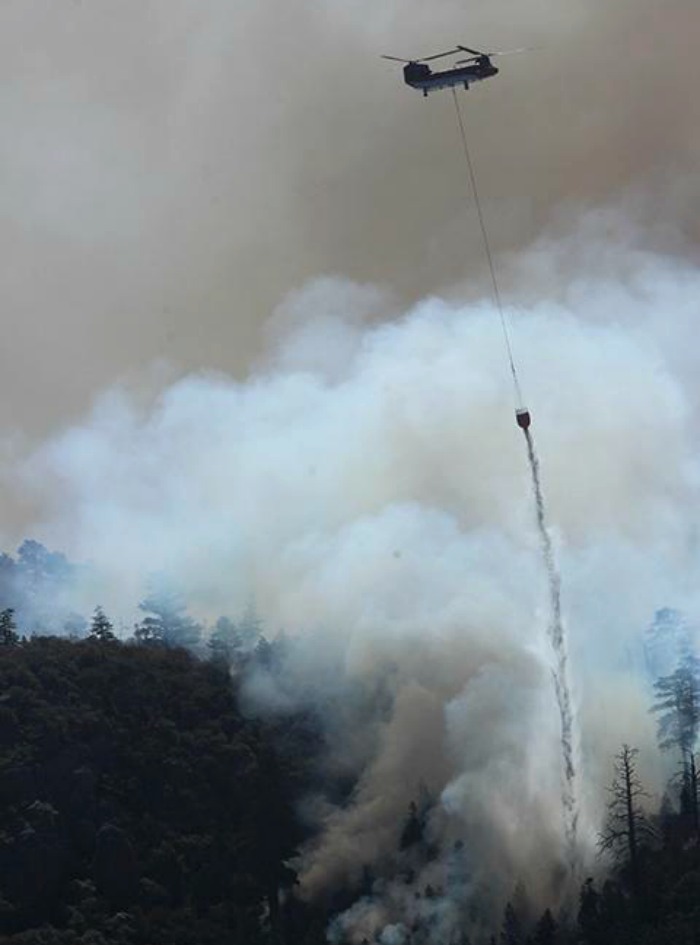