ST. GEORGE — A rider was seriously injured and flown to the hospital Wednesday after he lost control of his motorcycle in Veyo.

Shortly after 6 p.m. emergency personnel responded to a single-vehicle crash involving a motorcycle that went off of Chad Ranch Road in Veyo before plunging off of a 50-foot cliff.

The rider had no recollection of the crash during the call to 911, so the incident was initially classified as a fall.

The man told dispatchers “he was hanging upside-down in a bunch of bushes and was injured,” Dammeron Valley Fire Chief Kevin Dye said.

Intermountain Life Flight was launched and reported injuries as responders made their way to the scene.

Emergency personnel found the rider completely buried in a large pile of raspberry bushes more than 50 feet below the edge of the cliff.

EMTs, paramedics and firefighters made their way down the steep embankment and began to extricate the rider from the thick brush that encapsulated him.

“The brush was so thick there was no way the rider could have gotten himself free and it was even difficult for our responders to get to him initially,” Dye said.

After more than 45 minutes, the man was placed on a backboard and carried to the top of the landing where he was loaded into the helicopter and flown to Dixie Regional Medical Center for evaluation and treatment.

The rider sustained multiple injuries in the crash, including a fractured neck, left scapula and at least two broken ribs, Dye said, along with other possible internal injuries.

Dye said that the rider was heading east toward Pine Valley and was just north of Veyo when he lost control of the bike while negotiating a curve in the roadway.

The bike careened across the roadway and continued past the edge of the embankment before falling head-first into a pile of raspberry bushes, while the motorcycle landed less than 20 feet away entangled in thick brush.

“He went down about a 50-foot embankment before he hit a lot of raspberries and bushes at the bottom,” Dye said.

The man landed in a head-down position for an extended period of time while rescuers worked to free him.

While the rugged terrain and thick brush made for a complicated rescue, the chief said, those factors also saved the rider “who hit head-first without a helmet and probably would have been killed if not for the thick pile of raspberry bushes.”

The Dammeron Valley Fire Department and Gold Cross Ambulance responded and tended to the scene, while the accident investigation was conducted by the Washington County Sheriff’s Office.

Washington County Search and Rescue was also called in to assist, but firefighters were able to extricate the man prior to the rescue team’s arrival. 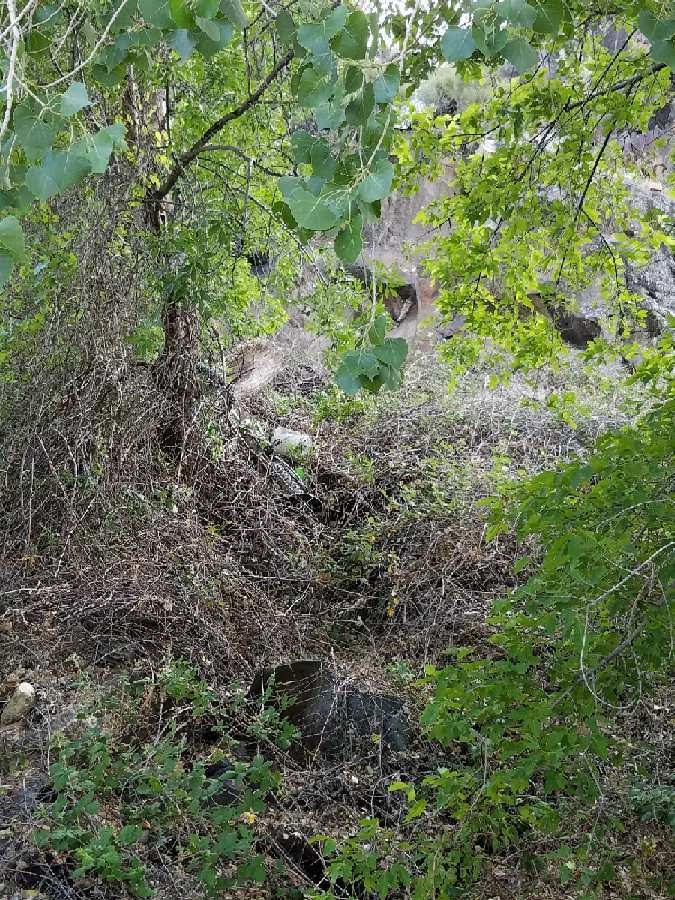 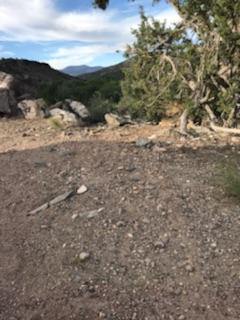 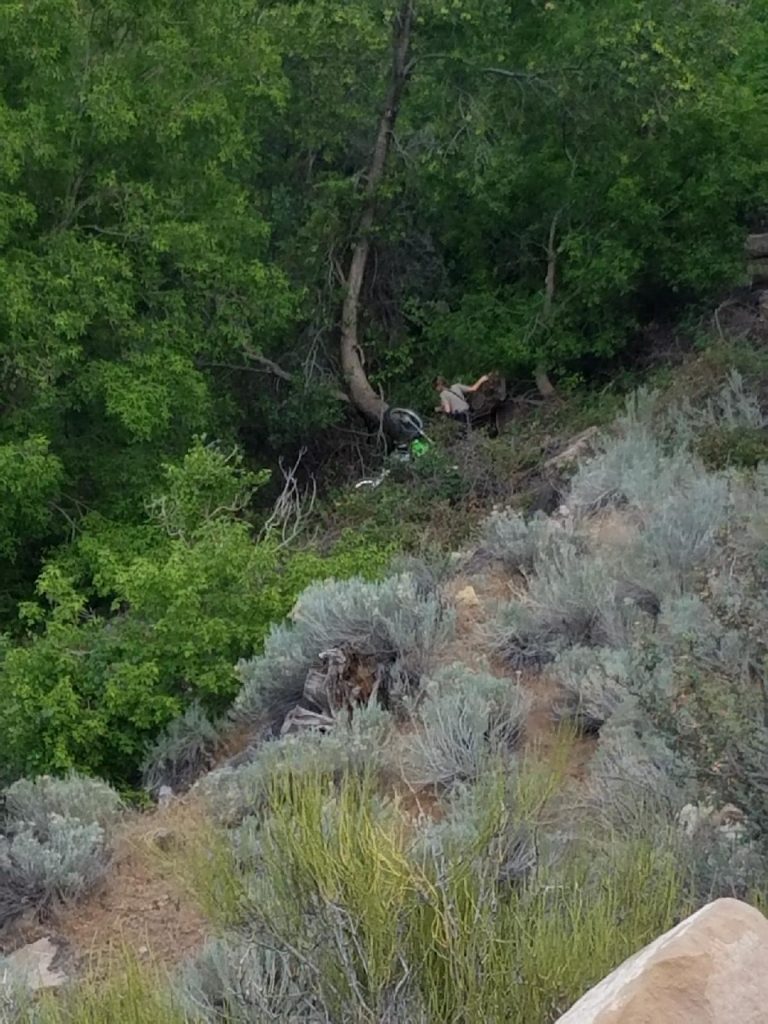 Motorcycle wheel can be seen sticking out of brush at the bottom of a deep ravine after a motorcycle crash, Washington County Utah, June 13, 2018 | Photo courtesy of Nadalee Cowley and Ben Stewart, St. George News 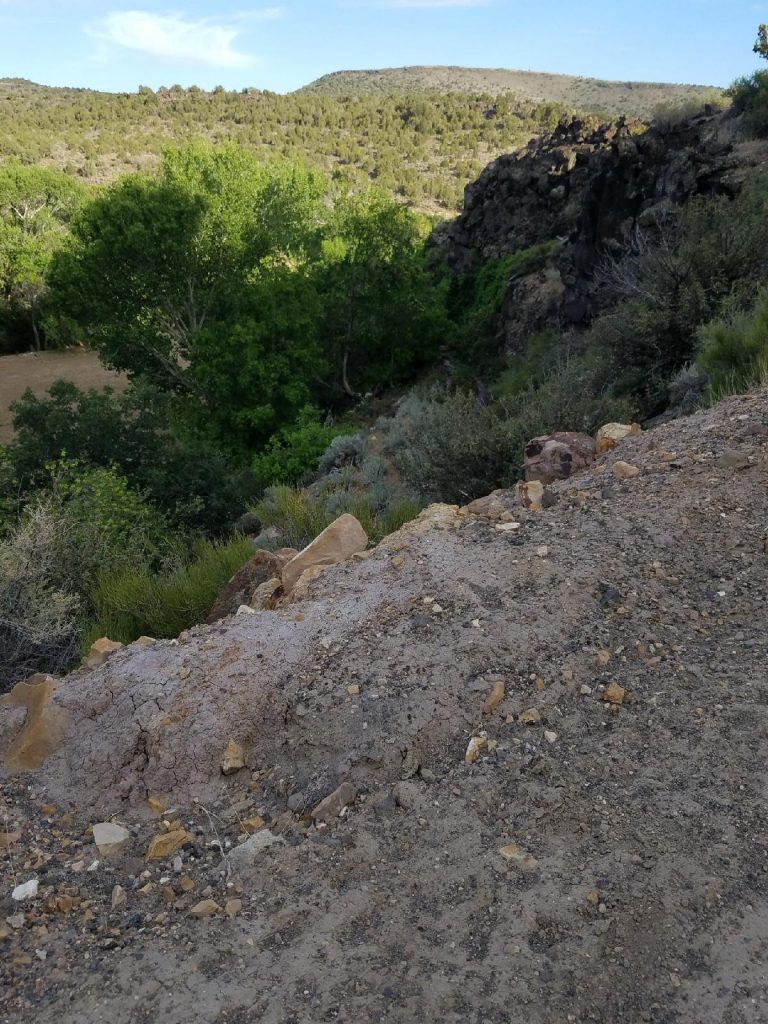 View from the top of the ravine where motorcycle and rider landed; red circle depicts man's position behind the tree and under brush, Washington County, Utah, June 13, 2018 | Photo courtesy of Nadalee Cowley and Ben Stewart, St. George News 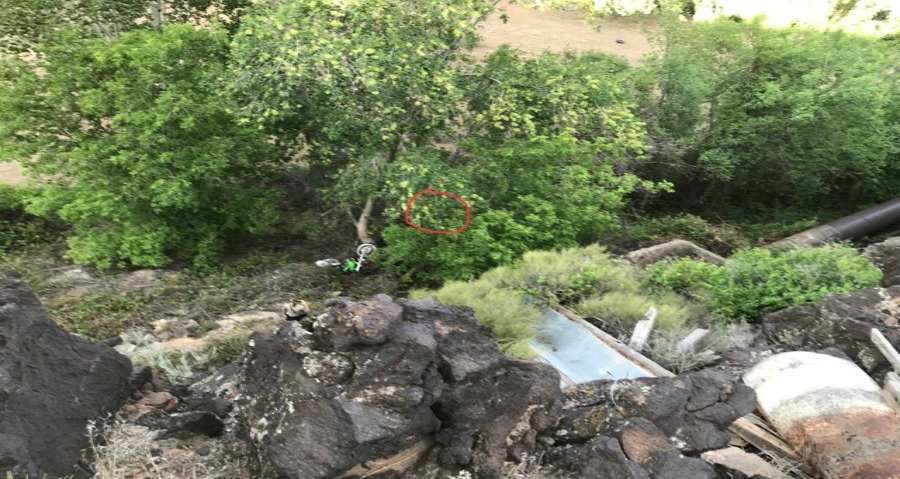 View from the top of the ravine where motorcycle and rider landed; red circle depicts man's position behind the tree and under brush, Washington County, Utah, June 13, 2018 | Photo courtesy of Nadalee Cowley and Ben Stewart, St. George News

Truck loses load, setting off chain of events that leads to motorcycle crash

Auto-motorcycle crash on Riverside Drive results in trip to hospital