ST. GEORGE – He’s not old enough to drive a car, but he can drive in runs, no problem.

Fifteen-year-old Pine View freshman Hunter Stubbs homered and drove in four runs as the Panthers drubbed Cedar 10-5 to earn fourth place and a spot in the 4A state playoffs Tuesday evening in Hurricane.

“I don’t really like to play freshmen because it can be too big for them, but he’s earned his way into the lineup,” Pine View coach Glen MacLellan said. “But his maturity level, and the way he carries himself and what he expects out of himself is not unrealistic. He keeps himself level-headed and he’s shown that he can play at this level.”

The two teams finished region play with identical 6-6 records and split their two games this year, so the extra game was needed to break the tie and send one of the teams into the playoffs. Upperclassmen like Tanner Staheli and Korby Myers figured prominently in the contest, but it was the freshman Stubbs who was the star.

“The kid’s a stud – he’s got a big future ahead of him,” Dawson Staheli said of his teammate. “He’s played four or five varsity games and he’s really performed well for us. He plays well at short and hits the ball hard.”

Cedar took a 2-1 lead in the top of the third when Myers ripped a two-run single into left field, scoring McClain Anderson and Tanner Esplin. It was the first runs and only the second hit Tanner Staheli had given up to the Redmen in two starts (he no hit Cedar a few weeks ago).

Pine View didn’t waste any time striking back. Roman Lafemina had a one-out single in the bottom of the third and came home on a double to the gap by Tanner Staheli. Cody Riddle singled to put two on and then Dawson Staheli stepped to the plate.

He rifled a single to left that got past the Cedar outfielder and rolled all the way to the fence. Lafemina and Tanner Staheli scored easily and Dawson Staheli decided he was going for broke as well.

“The first thing I thought when I saw it get past him was that I was going for it,” he said. “I have the speed and I was not going to stop.”

Staheli scored ahead of the throw and made it a 5-2 Pine View lead.

The next inning, Porter Dombrowski hit his first triple of the season to lead things off. Stubbs followed with an RBI single on a Texas-leaguer to left, making it 6-2. Later in the fourth, Riddle singled to bring home Stubbs and make it 7-2.

In the fifth, Weston Sampson and Daniel Elder each singled ahead of Stubbs. The freshman then stepped up and socked a deep ball to left field that cleared the fence by 20 feet.

“Jumping in to varsity the first time, I was nervous like crazy and my stomach dropped a bit,” Stubbs said. “But then I realized that it’s just baseball, and I just play the game how it is. Going to the plate, I’m not as big and they probably know I’m a freshman, so they probably just want to blow a fastball. That’s what I would do. So I saw a fastball and swung the way I am supposed to do.”

His three-run homer made it 10-2 and enabled Pine View to pull its starter, Tanner Staheli, so he would have rest for a potential start in the playoffs on Saturday.

Cedar added three runs in the sixth off of Panther relief pitching, but the five-run cushion was plenty for Pine View to take the victory.

Tanner Staheli pitched five innings and allowed three runs and three hits, picking up the victory. He also doubled and had two hits.

“It was in the back of our heads that if we lose, we’re out,” Tanner Staheli said. “I really trust my defense and as a pitcher I was thinking of just throwing strikes and letting my defense behind me make the plays. I was starting to get a little fatigued, but my defense had my back.”

Pine View, 14-7, heads to Spanish Fork for the first two rounds of the playoffs. The Panthers play the pod host Dons at noon Saturday and then play a second game at 3 p.m. If they beat Spanish Fork, the second game will be at SFHS against the winner of Bear River and Tooele. If the Panthers lose their first game, they still play at 3 p.m., but at the Spanish Fork Complex against the loser of the other game.

Cedar, which got two RBIs each from Myers and Andre Castaneda, ends the year with an 11-11 record.

The rest of the playoff schedule for Saturday is listed below, though there are still tiebreakers necessary for Region 10’s logjam at fourth place. 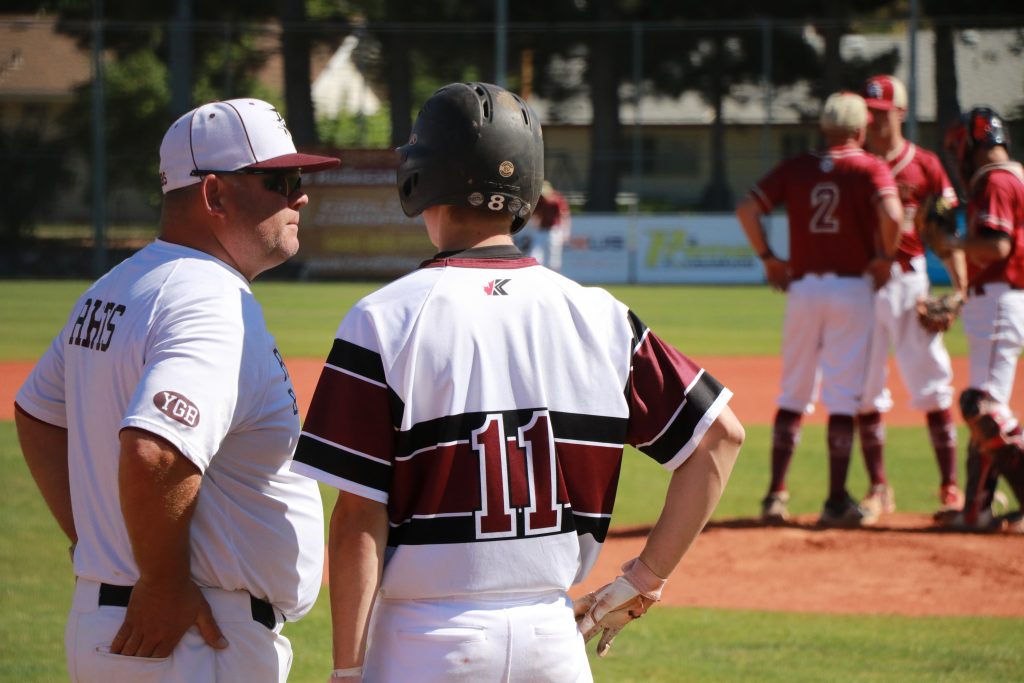 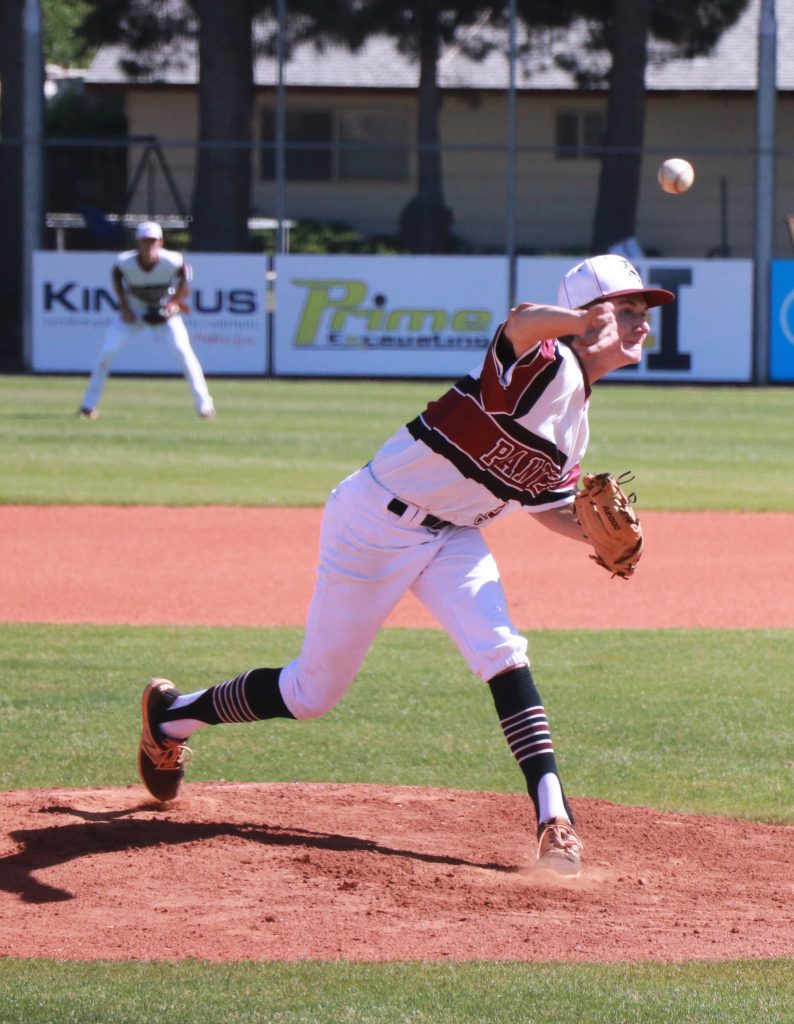 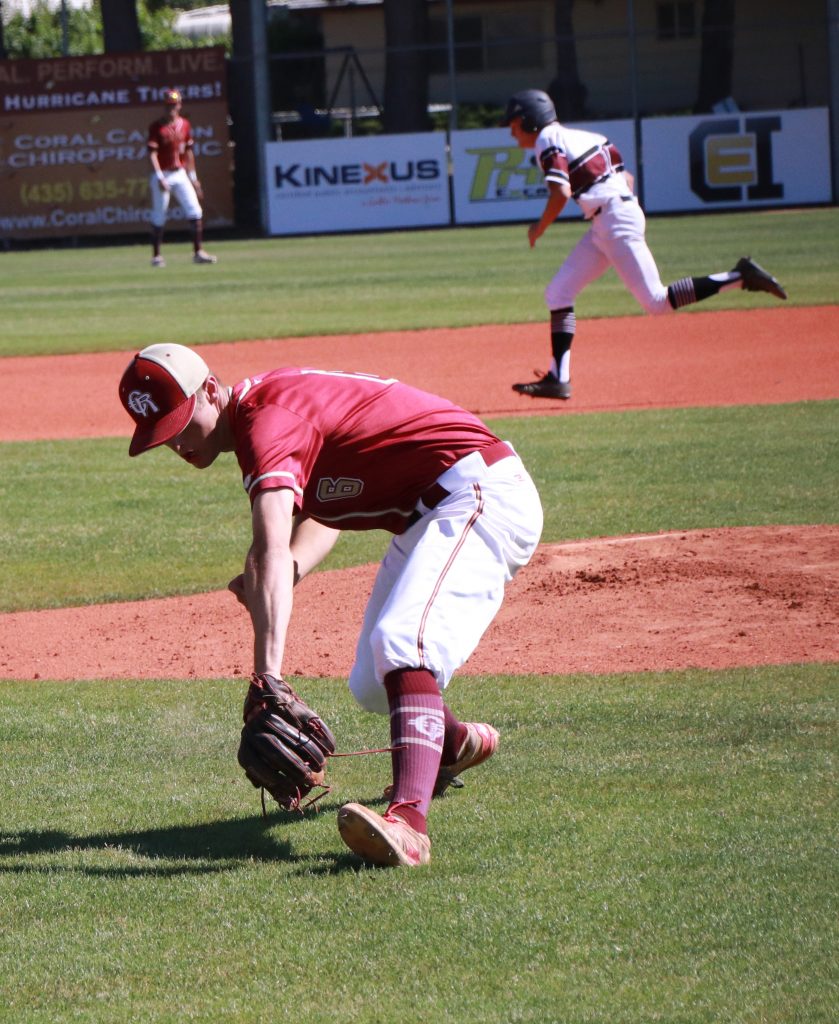 Cedar pitcher Bridger Bunnell stops an infield grounder but was unable to throw the batter out at first during a play-in game against Pine View, Hurricane, Utah, May 8, 2018 | Photo by Jeff Richards, St. George News / Cedar City News

PV, Cedar both win in pursuit of final playoff spot

The top pitchers entering the final week of the regular season