SUV sustained frontal damage when it struck a pickup truck on I-15, Beaver County, May 2, 2018 | Photo courtesy of the Utah Highway Patrol, St. George News

SOUTHERN UTAH — Nearly 20 crashes were reported along Interstate 15 during three separate weather events that descended upon the region Wednesday; a few tips can increase safety for inclement weather, particularly when it strikes without warning.

The first cycle of crashes began just before 10 a.m. on I-15 near mile marker 101 and affected travel on both sides of the interstate where multiple vehicles scattered the landscape after either sliding or rolling off of the roadway, Utah Highway Patrol Sgt. David Bairett said.

Five hours later several more crashes were reported on the interstate, most of which occurred between mile marker 93 and 102, the trooper said.

Multiple vehicles “slid off, ran into each other and crashed into guardrails, cable barriers and so on,” he said.

“The second set of crashes was pretty much the same thing, where another hailstorm came through and left slush on the road.”

Just as officers were clearing the vehicles and debris from the roadway, a third series of crashes came through and troopers were dispatched north to mile marker 107.

Within minutes troopers were covering crashes farther south; the close succession of wrecks occurred between mile marker 101 and 107, Bairett said.

One of the crashes involved an SUV that slid into the back of a truck that had pulled over to help another motorist after a crash.

“We had several more rollovers and vehicles off of the roadway during that period, and all three were weather ”

In all, a “few” individuals were transported to the hospital with only minor injuries, Bairett said.

He said that a layer of slush, not ice, covered the interstate when each cycle of crashes occurred, which is a phenomena that occurs every spring, he said.

First, it starts to rain, which cools everything down and is followed by hail that mixes with the rain and turns into slush, “which in my opinion is worse than ice, particularly at high speeds, because it pulls you in, and can cause you to lose control of the car,” he said.

It is best to avoid driving in icy or slushy conditions, but when that’s not an option, the following tips can help keep motorists safe, provided by Consumer Reports. 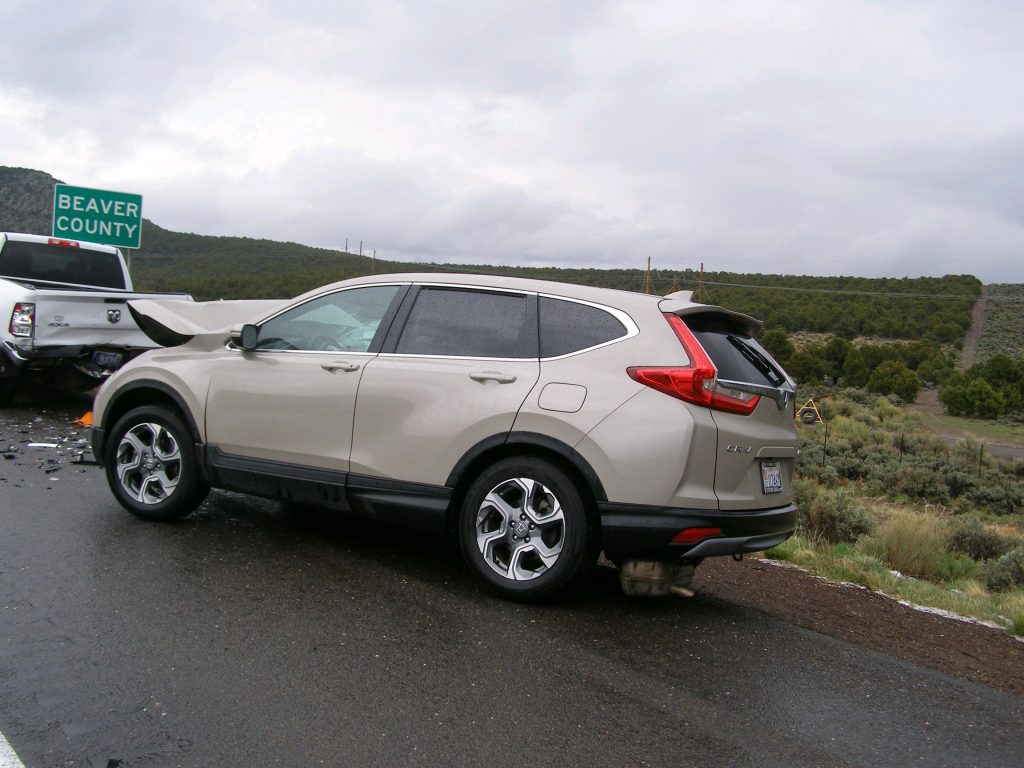 SUV sustained significant frontal damage when it struck a pickup truck on I-15 in Beaver County, May 2, 2018 | Photo courtesy of the Utah Highway Patrol, St. George News 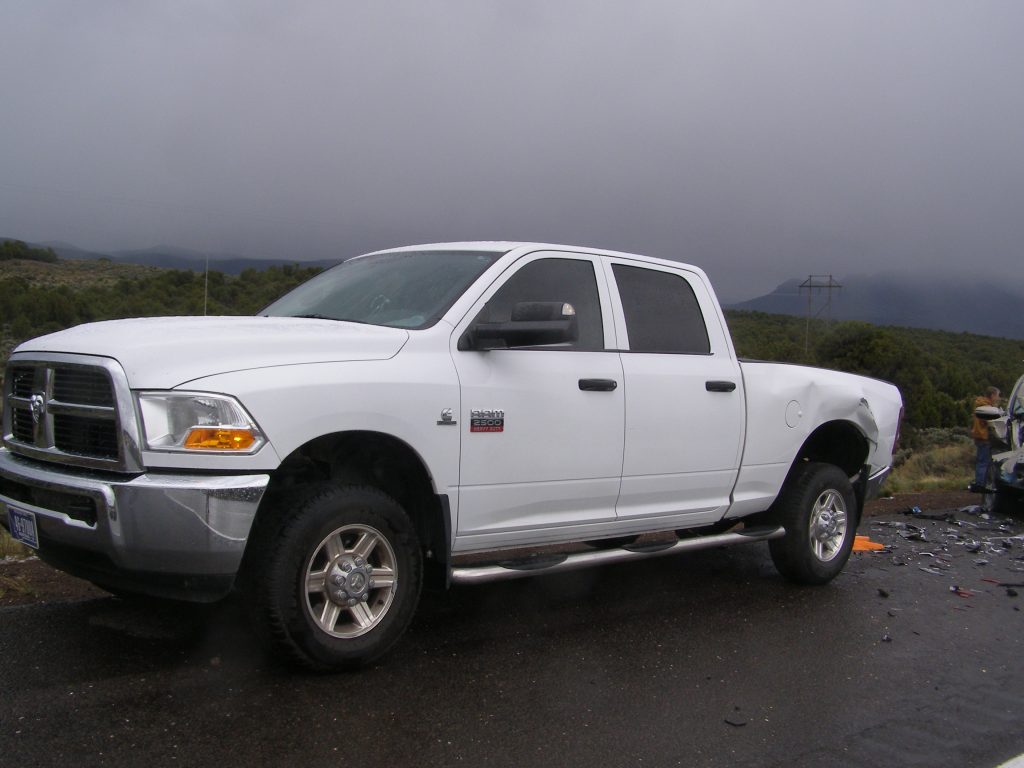 Dodge pickup truck is struck from the rear after pulling over to help a motorist during hail storm Wednesday, Beaver County May 2, 2018 | Photo courtesy of the Utah Highway Patrol, St. George News 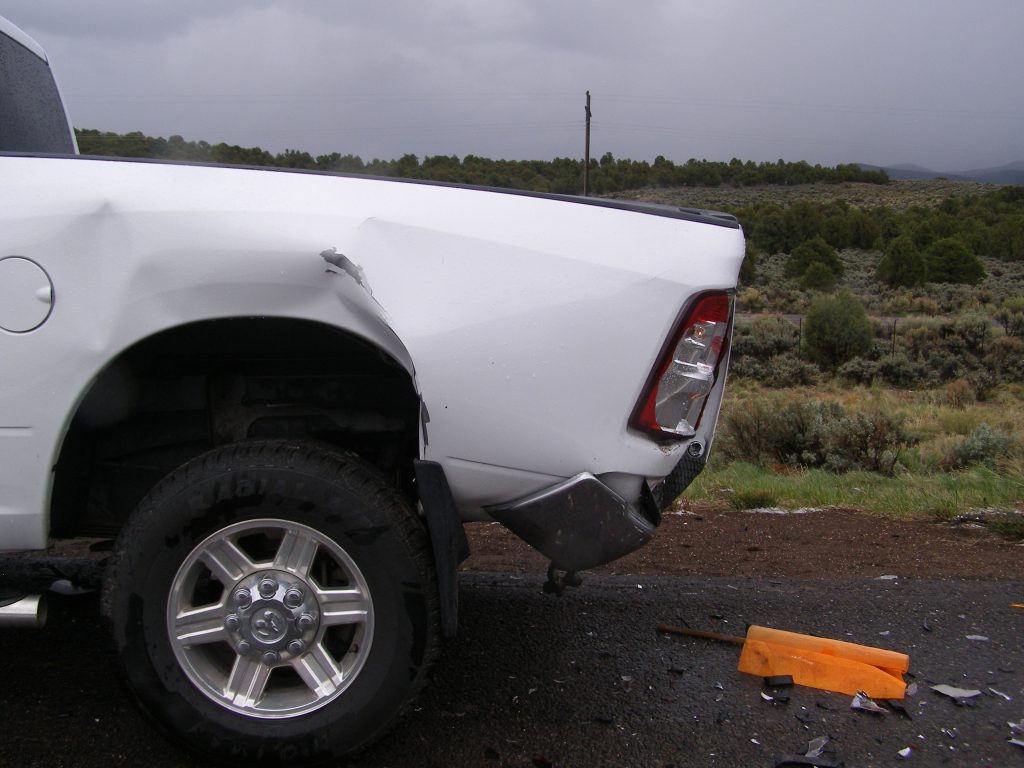 Dodge pickup truck is struck from the rear after pulling over to help a motorist during hailstorm, Beaver County, May 2, 2018 | Photo courtesy of the Utah Highway Patrol, St. George News 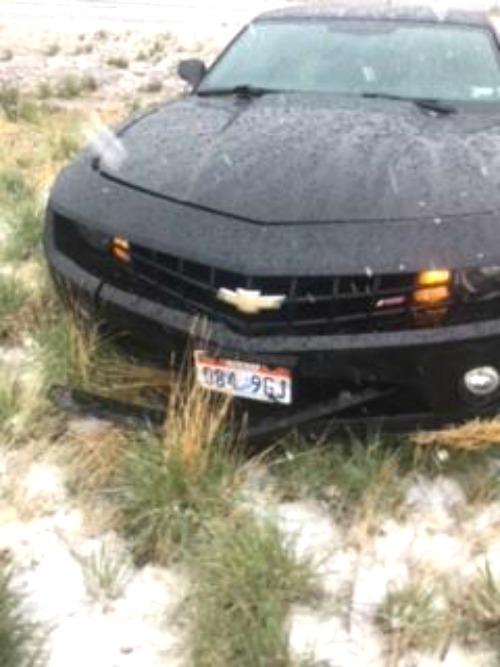