ST. GEORGE — Pine View’s Eden Stone drove in the game-winning run with a grounder to short with the bases loaded and one out in the bottom of the seventh, giving the Lady Panthers a hard-fought 2-1 win over visiting Hurricane Tuesday afternoon.

Hurricane shortstop Mellina Madsen fielded the ball cleanly on the last play, but appeared to hesitate slightly in deciding whether to try to turn a double play or to throw home for the force out at the plate. She ended up throwing it home, but the ball arrived too late to prevent Pine View’s Abby Neilson from scoring the game-ending run.

As soon as Neilson crossed the plate, the Panther players and coaches erupted in celebration. It was the second time this season Pine View and Hurricane had battled within a run of each other – the last time the two teams played, on March 29 at Hurricane, the Tigers prevailed 6-5.

Hurricane started off Tuesday’s game on a promising note, with senior Hannah Thompson leading off with a double to right-center field. Two batters later, with Thompson having stolen third, Madsen then bunted to bring in the run, the ensuing throw to home plate arriving too late to tag out Thompson. Mesa Jones then reached first on an error, but the inning soon ended with two straight grounders to short, leaving three Tiger runners stranded.

In the bottom of the first, Pine View’s Leachel Barlow led off with a walk. She was followed by Hannah James, who singled to left-center. Pine View’s next two batters got out, but Hallie Linford singled to right with two out, bringing home Barlow and tying the game 1-1.

Neither team scored during the next five innings of the defensive battle, as the players struggled to hit the ball amid the sunny mid-afternoon heat, with temperatures lingering in the mid-80s.

After the first inning, Hurricane saw only two more batters reach base: senior Savannah Jessop doubled to left in the fourth inning and freshman pitcher Chantelle Pearson walked in the fifth. Neither runner was able to advance, however. Pine View first baseman Kinzie Sullivan caught Thompson’s line drive with one out in the fifth and quickly touched first base, ending the inning by doubling up Annie Black, who was the Tigers’ substitute runner in place of Pearson.

The game’s defensive heroics weren’t limited to the Pine View squad, however, as Hurricane’s fielders made several key plays throughout the game. Madsen made a game-high six putouts at shortstop, including catching five fly balls. Right fielder Heather Stout threw out Linford at second during the bottom of the third as Linford was trying to advance on an overthrown ball from catcher to first base. Hurricane’s other outfielders also made multiple catches, including left fielder Abbie Elison’s catch of Kaitlyn Roundy’s towering fly ball that reached the fence to lead off the second inning.

In addition, Hurricane third baseman Mesa Jones made key putouts to end both the fifth and sixth innings. With two outs and two on in the fifth, Jones snagged Kylie Donovan’s hard-hit liner down the third-base line for the third out. Then, during the sixth, Jones tagged a runner at third for the second out, right before James singled to load up the bases. Sydnee McArthur then grounded out to Jones, who threw out the batter at first to end the inning with the score still tied 1-1.

Both pitchers ended up going the distance for their respective teams. Neilson struck out seven in seven innings, allowing just three hits and walking one. She struck out the side in the second inning. Pearson, meanwhile, struck out three and allowed five hits while walking 10 batters in the loss.

“It just came down to our bats,” said Hurricane head coach Ryan Smith. “We played great defensively, but just couldn’t get our offense going.”

“Hurricane played well on defense,” Pine View assistant coach Russ Neilson agreed. “We had plenty of chances and left a lot of runners on base.”

“But the girls just played hard all seven innings,” Neilson added. “Our pitcher kept them off balance just enough to give us that chance to win at the end. Our girls really needed that win.”

The victory boosted Pine View’s region record to 2-7 with three games remaining in the regular season. The Panthers’ next region contest is at Desert Hills Friday at 4 p.m.

Meanwhile, Hurricane dropped to 3-6 in region play with the loss. The Tigers also have three more games left in their regular season, starting with a Tuesday, May 1, contest against region-leading Cedar at Hurricane.

In other Region 9 action Tuesday, the Canyon View Lady Falcons came from behind late in the game to defeat the Dixie Lady Flyers, 7-2.

After five-and-a-half innings, Dixie held a 2-0 lead. But Canyon View scored all seven of its runs during a rally in the bottom of the sixth.

Senior Kaylee Riding, who pitched the first five innings for Dixie, had belted a two-run double in the fourth to give the Flyers a 2-0 lead.

Nielson was the winning pitcher, striking out five over three innings. Starting pitcher Breanne Hancock also struck out five batters for the Falcons. Dixie’s Riding, who was relieved by Chayden Chong in the sixth, took the pitching loss.

The win, coupled with Snow Canyon’s 4-2 loss at Desert Hills Tuesday, moved Canyon View a half-game ahead of Snow Canyon for fourth place in the Region 9 standings. All seven Region 9 teams are scheduled to play a total of 12 region games, with each team playing the others twice. The top four placers in the region standings will qualify for the 4A playoffs in mid-May.

Canyon View will next host cross-town rival Cedar Friday at 4 p.m., while Pine View’s next region game is at Desert Hills that same afternoon. Dixie hosts Snow Canyon at that same time. 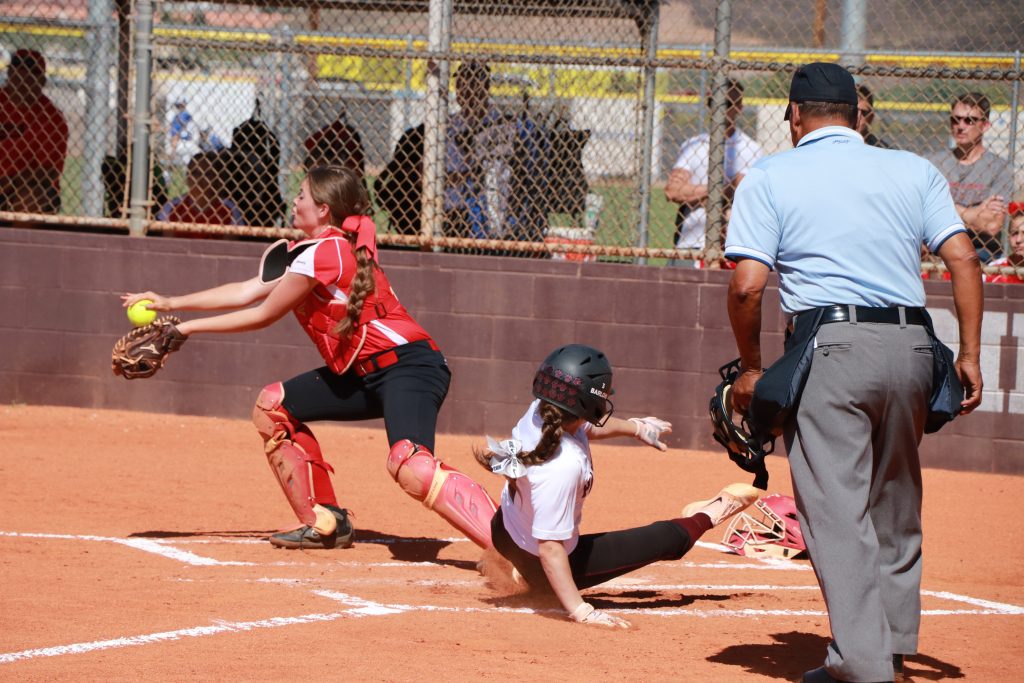 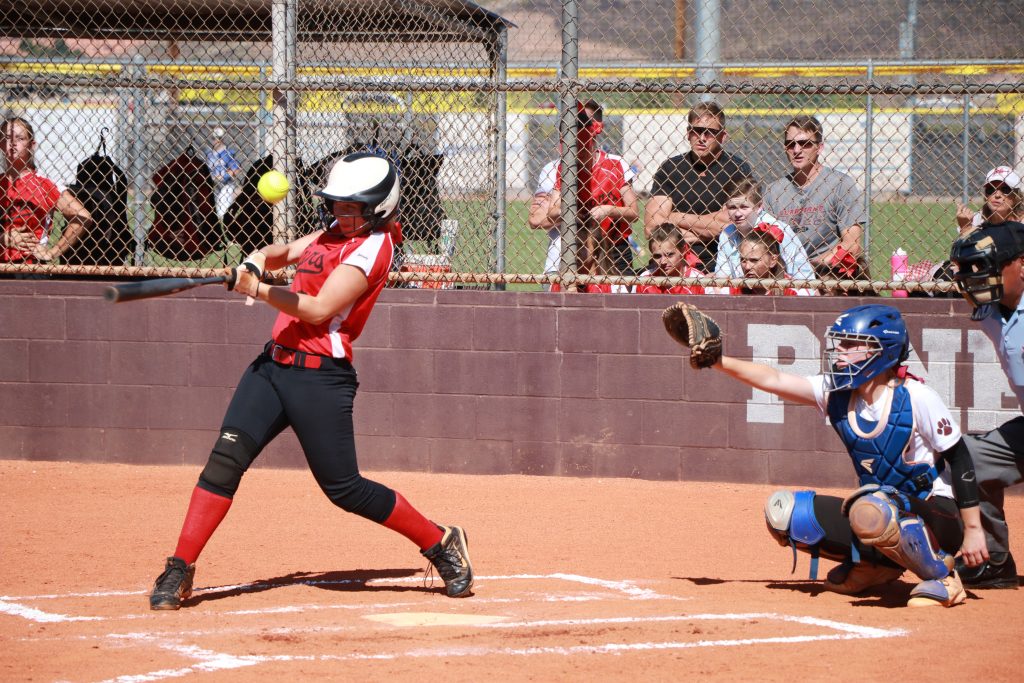 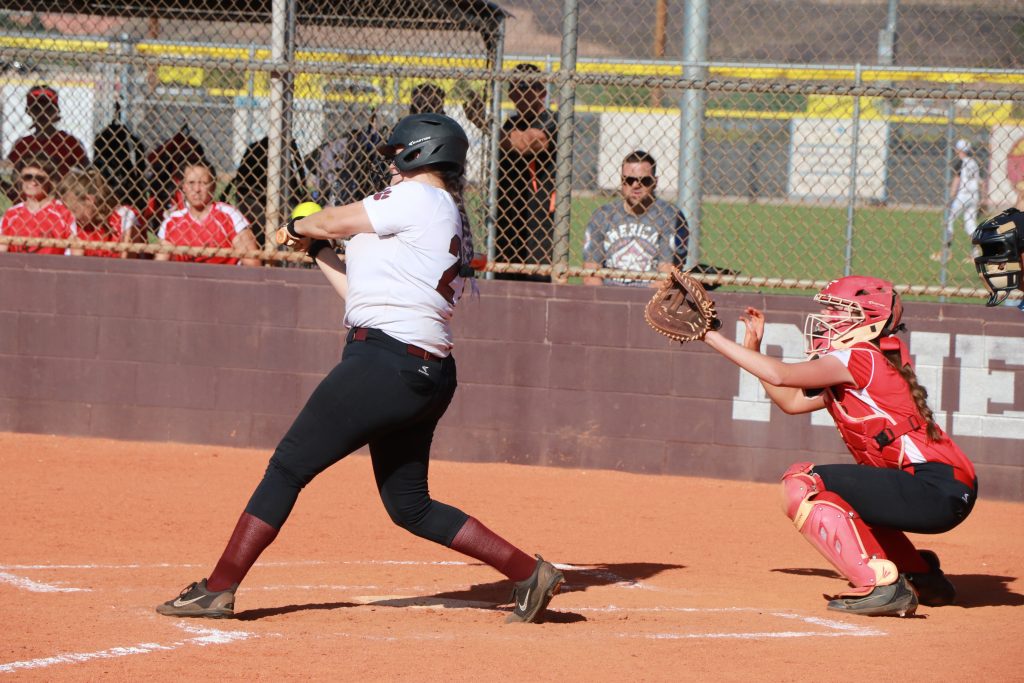 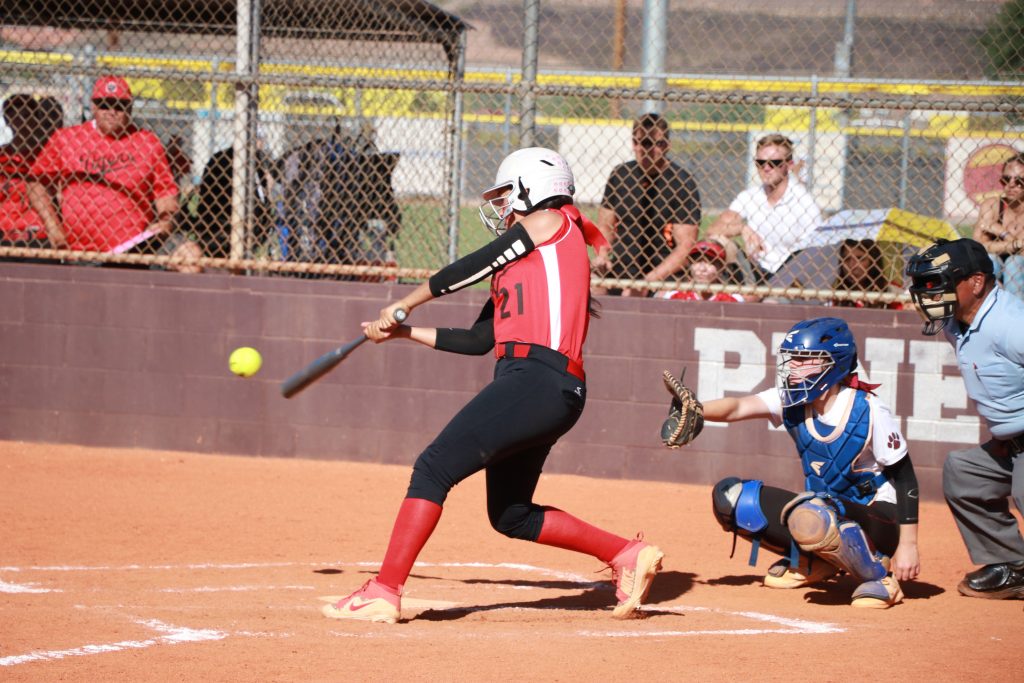 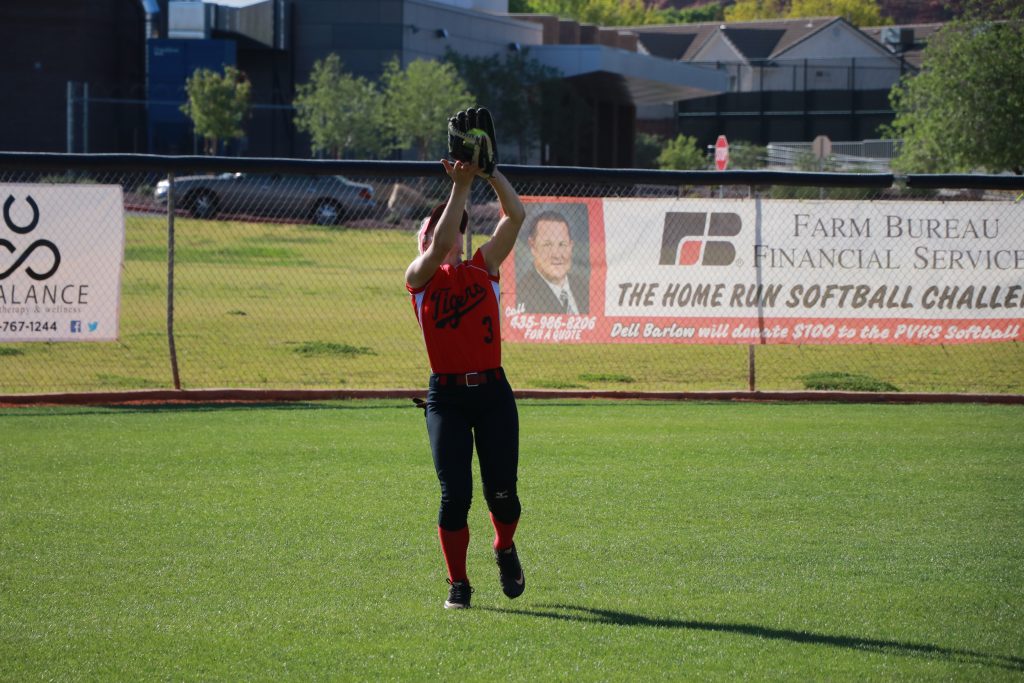 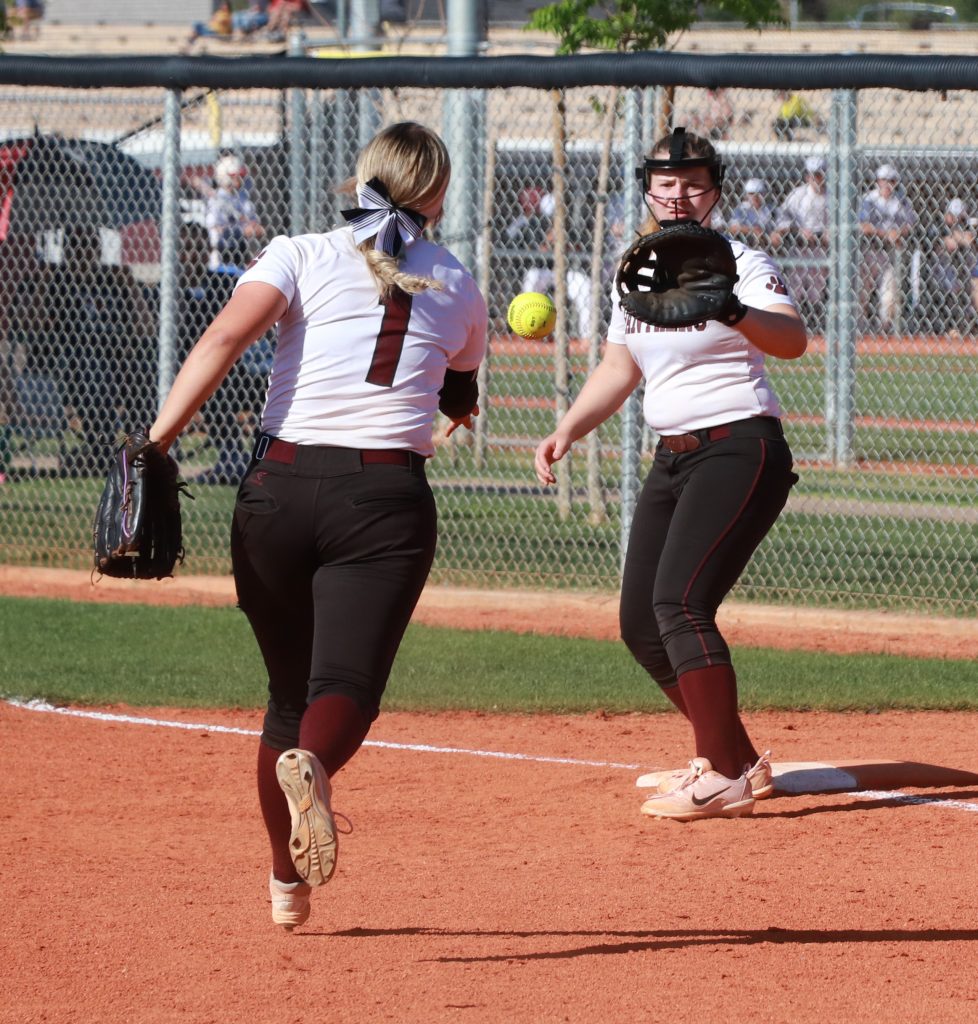 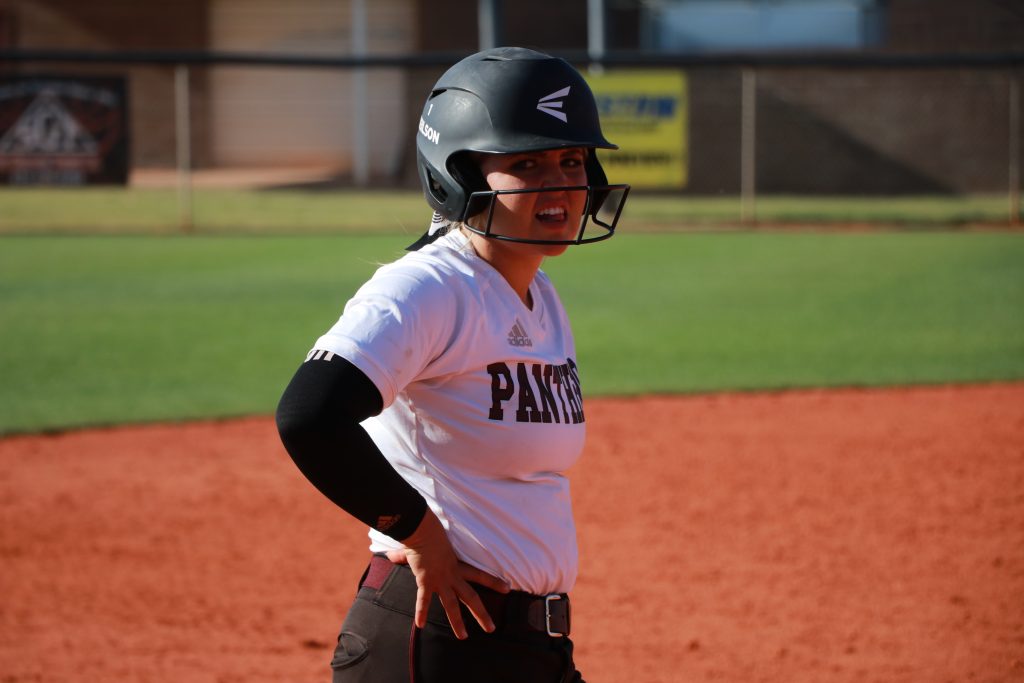 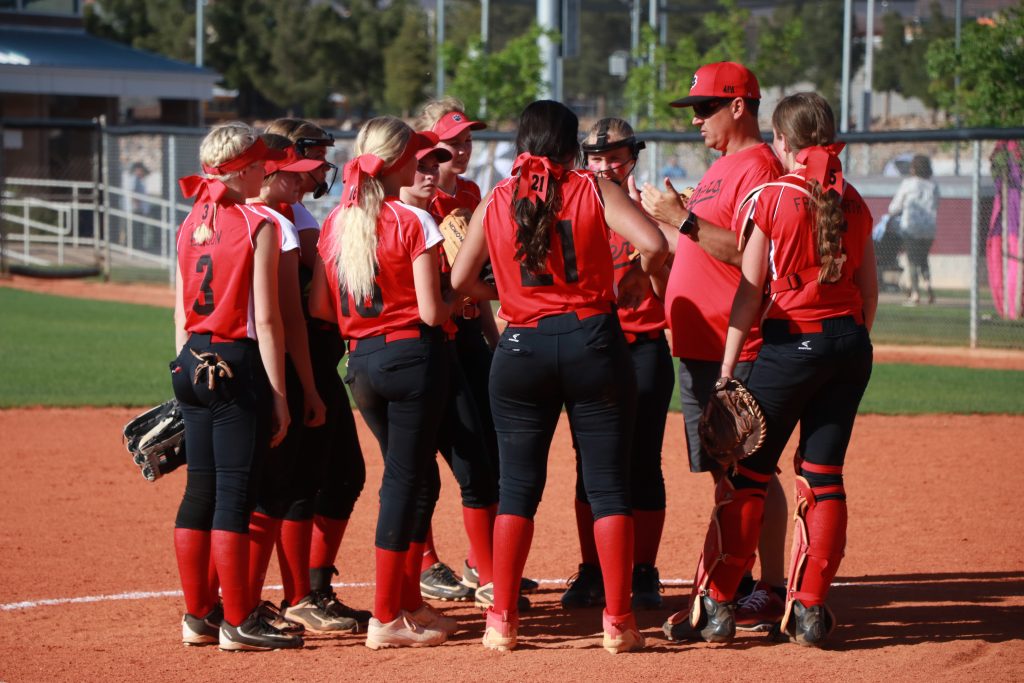 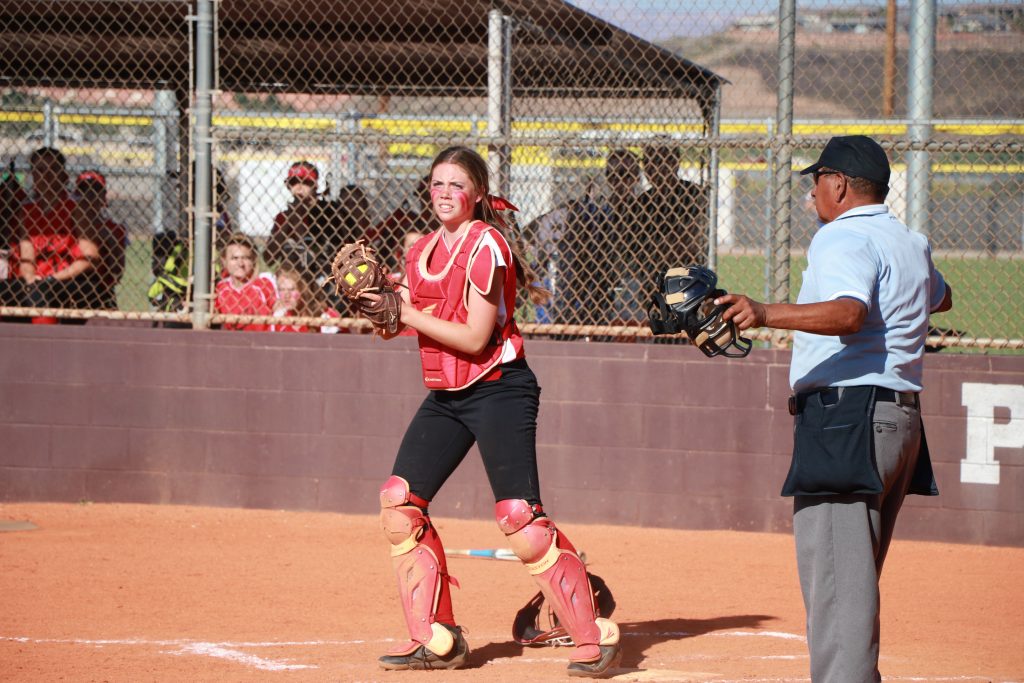 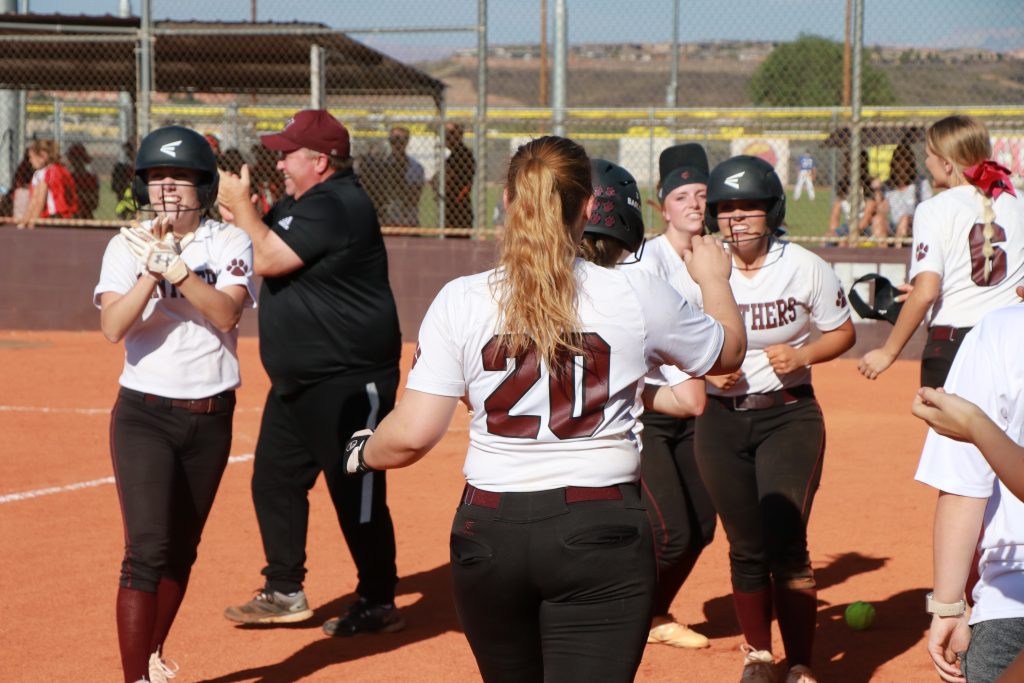