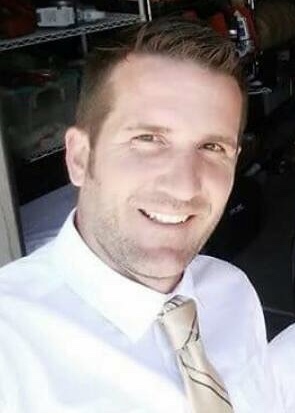 David Michael Leishman, age 39, returned to the loving arms of his Heavenly Father on April 3, 2018 in St. George, Utah due to complications of pancreatitis. He was born Jan. 16, 1979 in St. George, the youngest of five children, to Truman Myers Leishman and Carol Ann Seegmiller Leishman.

After high school David moved to Salt Lake City to live with Chris and Roger, his sister and brother-in-law, while he attended Salt Lake Community College where he earned an Associate degree. Between school and visits home, he met, and eventually married Marilla Terry.

They were sealed in the St. George Temple of The Church of Jesus Christ of Latter-day Saints on Nov. 17, 2001. Soon after, they moved to Cedar City where they both attended Southern Utah University (SUU). David made a living selling furniture and doing landscaping/yard maintenance. Both David and Marilla earned their Bachelor’s degrees at SUU.

Two sons were born to them while they lived in Cedar City; David Michael, Jr. (2003) and Joseph Truman (2005). David loved to take his sons hiking, camping and fishing when they were little. He loved to buy them toys and gadgets that they could have fun playing with together.

While they lived in Cedar City, David was very active in the LDS church. He served as a ward missionary and had a profound influence on one couple. Marilla received this sweet message after David’s death, “…because of him (David), his example, his honesty, his personality …, the things he said, didn’t say, his stories and real life experiences … he had the biggest influence on us to return to church and get to the temple to be sealed. … we’re SO stinking grateful it was Dave who was our missionary.”

David and Marilla had been married 11 years when their marriage ended in divorce.

David then moved back to St. George where he did landscaping/yard maintenance and worked as a server at Texas Roadhouse. It was there that he met Haley Gratton who was also working as a server. Haley had just moved to St. George with her daughter, Sadie. Both Haley and sweet little Sadie captured David’s heart, so he proposed to Haley after one of their shifts by taking over the microphone and singing “Love Grows” to her. They were married on June 7, 2014, in the Old Farmhouse at Staheli Farms.

On April 21, 2015, Eleanor Reese blessed their lives. Her birthday and her middle name is very special because Eleanor Reese was born on her great-grandfather Reese Leishman’s birthday. David loved Sadie very much and was madly in love with Ellie. This time in David’s life, while so special because of Haley and his two daughters, was a very difficult time due to his struggle with the disease of addiction. After just 1 ½ years of marriage, Haley moved back to her hometown of Springfield, Missouri and they eventually divorced. Because so many miles separated him from his girls, he communicated with them almost every day by FaceTime.

While on his journey to the sobriety that he wanted so badly, he met Laura Child Smith. She helped him and encouraged him, and after a period of ‘getting to know you’ time, they got married on December 22, 2016. The Leishman family gained three more members, Laura and her two sons, Beck and Owen. David was an amazing ‘bonus dad’. He loved Beck and Owen very much and they loved him. They always had so much fun working with him on the tractor and playing claw games. He used to call Beck “Lord Becklington. Joey and Owen would always be playing together so he called them “Jowen”. He taught the boys how to play poker and they loved watching baking shows with him.

During the month of June in 2017, David and Laura had their blended family of six living together in Draper when David, Jr. and Joey visited from St. George, and Sadie and Ellie visited from Springfield, Missouri. Another time, a very special memory was made when David took the four boys on a camping trip with Scott, Beck and Owen’s father. It was such a wonderful demonstration of love and family.

David is preceded in death by his brother-in-law, Lau (Jacquie) Tuitavuki. On Oct. 20, 2017, David’s last living grandparent, Foy Seegmiller, preceded him in death. They were fishing buddies on many occasions. David will be buried next to his grandfather, Foy, in the Leeds City Cemetery.

The family would like to thank the wonderful angels in the ICU of Dixie Regional Medical Center for the loving and tender care they provided David in his last few days on earth.