As the team’s 25 members posed with their numerous trophies and medals Wednesday afternoon in the school gym, the girls and their coaches reflected on the past year’s experiences.

“Our theme for the year was ‘Earn It’,” said team captain Sarah Adent, one of 10 seniors on the team. “Now we say ‘Earned It,’ because we did.”

Saige Abbott, also a senior, was unanimously singled out by her teammates and coaches as the team’s inspirational leader. So much so that Snow Canyon recently created a special award named after her. School officials said the “Abbott Inspiration Award” will be given annually to a Snow Canyon High School student who has shown “spirit, passion, kindness and inspiration” to those around them.

Saige Abbott, who was honored as the award’s first recipient during “Senior Night” recognition at halftime during Snow Canyon’s Feb. 9 basketball game, has worked hard to overcome physical challenges throughout her life. Born with hemiplegia, a form of cerebral palsy that affects one side of the body, she has limited mobility on her left side.

“As a toddler Saige’s muscle tone was pretty tight and she dealt with petit mal seizures constantly,” her mother, Stacy Abbott, said. “At the age of 5, she had a hemispherectomy that fixed the seizures but not the tight muscle tone. In fact, it made her tone tighter on her left side.

“One year, a cheerleader from our neighborhood came to our home to see if Saige would like to participate in a cheer clinic. It was the first time she’d ever been invited to do anything. That clinic changed her life forever.”

When Saige Abbott reached seventh grade, she told her parents she wanted to become a cheerleader for her school’s team. The Abbott family was living in northern Utah at the time and didn’t move to St. George until four years later.

“I didn’t want to crush her dreams but I didn’t really have anyone to ask how to do this,” Stacy Abbott said. “So I started with the school’s cheer adviser which then led me to the principal and then the district. They all agreed they’d give it a try. Her eighth-grade year, she just cheered at a few games and then in ninth grade they put her in the competition. Then, in 10th grade, she tried out and the school wouldn’t take her. She was devastated.”

“She was nothing without cheer, or so she thought,” Stacy Abbott said, remembering. “That year, I found a competitive cheer group and they had a special-needs team. Saige, of course, flourished on this team but so did the other girls. Two of the girls on this special-needs team gained confidence through watching Saige to try out for their schools’ teams, and they have made it.”

Saige Abbott later tried out again and made her high school’s cheer team the summer between her sophomore and junior years, but then her dad got a new job and the Abbotts moved to St. George.

“We thought that her dream might be over,” Stacy Abbott said, adding that after a supportive phone call and a face-to-face meeting with Snow Canyon officials, Saige Abbott was able to join the Lady Warriors cheer squad for her junior and senior years.

“Saige never lets (her disability) hold her back,” her father, Jason Abbott, said. “Saige has so much spirit, enthusiasm, drive and determination, and is always smiling … hence her nickname ‘Smiley.’”

Jason Abbott said his daughter’s infectious positive attitude has always had a profound effect on many others, including himself.

“She has an amazing heart and once people get to know her, want to be around her,” he said. “In elementary school in 2012, she was presented with the D.A.R.E. Adversity award for being the student that dealt with a lot of different trials, but she never looked at them as trials. She always went about her day with a smile on her face. She has a way better attitude about life than most people do.

“When I start to feel down about life, I always look at Saige as an example and realize I shouldn’t be complaining,” her father added.

Saige Abbott said she enjoys bringing a positive attitude to the team and does whatever she can to motivate her teammates.

“My favorite things about being a cheerleader has to be having great friends to cheer with, being part of all the excitement that happens at games and cheer competitions.” Saige Abbott said.

Performing for crowds at games and competitions is another thing Saige Abbott loves about cheerleading.

“I just love being out there in front of everybody,” she said, adding that she plans to attend Southern Utah University in Cedar City this fall and hopes to try out for the Thunderbirds cheer squad.

Stacy Abbott added: “My favorite part about being her mom is watching people who are hesitant to give her a chance at first become so inspired and blown away by her determination, abilities and never-give-up attitude that it makes them go harder and achieve more.”

“Saige gives 100 percent in everything she does,” Jason Abbott said. “She has so much school spirit and if you watch her cheer, it’s clear to see. She is proof that anyone, no matter their physical challenge, can achieve any goal.”

“Having the opportunity to go and compete at nationals against 10 other teams from all over the U.S. was very inspiring,” said Snow Canyon head cheer coach Kayshia Roemer, who is assisted by Kirsten Hansen, Danielle Johnson and Rob Grim.

“We came in ready to have fun and take in all the memories,” Roemer said. “They performed with pride and passion, not knowing any of the other teams or their outcome. It was exciting and nerve-wracking all at the same time.

“The outcome matched our dedication, hard work and love for each other and the sport. We could not be prouder of each one of these girls this year.”

Snow Canyon’s impressive display of hardware won this year includes a dozen large trophies, as the team also won five first place awards at region, sweeping every category, in addition to taking three firsts, one second and one fourth at state.

“It’s been our best year ever,” Roemer said. “It’s like we are a big family.”

Senior cheerleader Avaree Vowell agreed: “The best part of it is the bond that we all share.”

Saige Abbott and her parents said they’re grateful for the love and support shown by the Snow Canyon cheerleaders, coaches, school officials and fans.

“Being a Snow Canyon cheerleader has been the best thing ever for Saige,” Jason Abbott said. “The coaches have been so amazing to her, and have built the best cheer team I have ever seen. You can tell they are all working together to be the best they can be.” 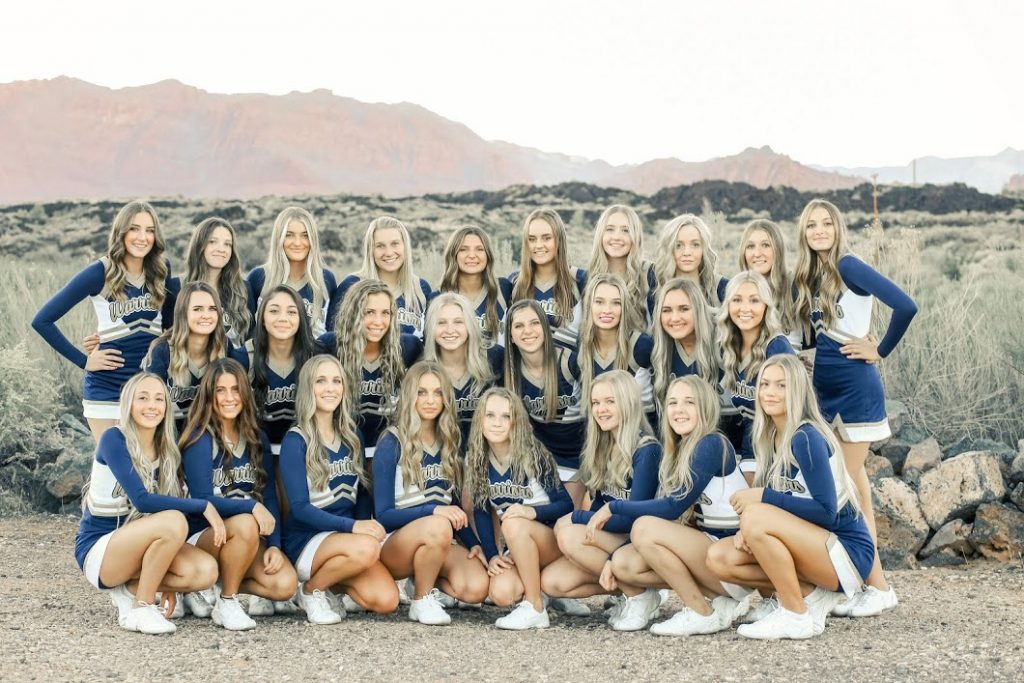 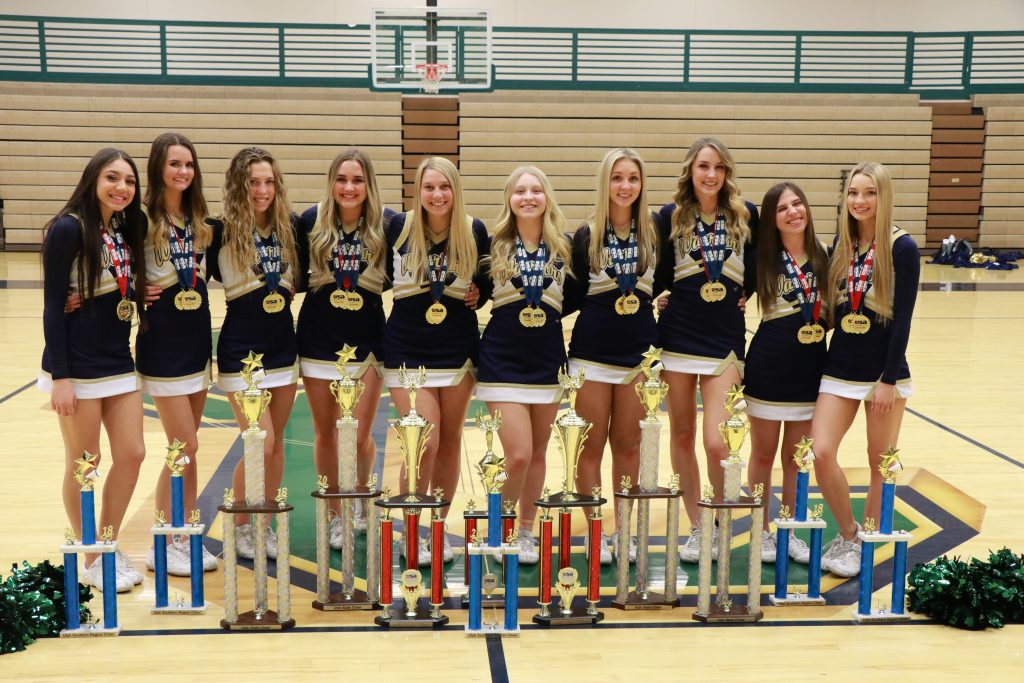 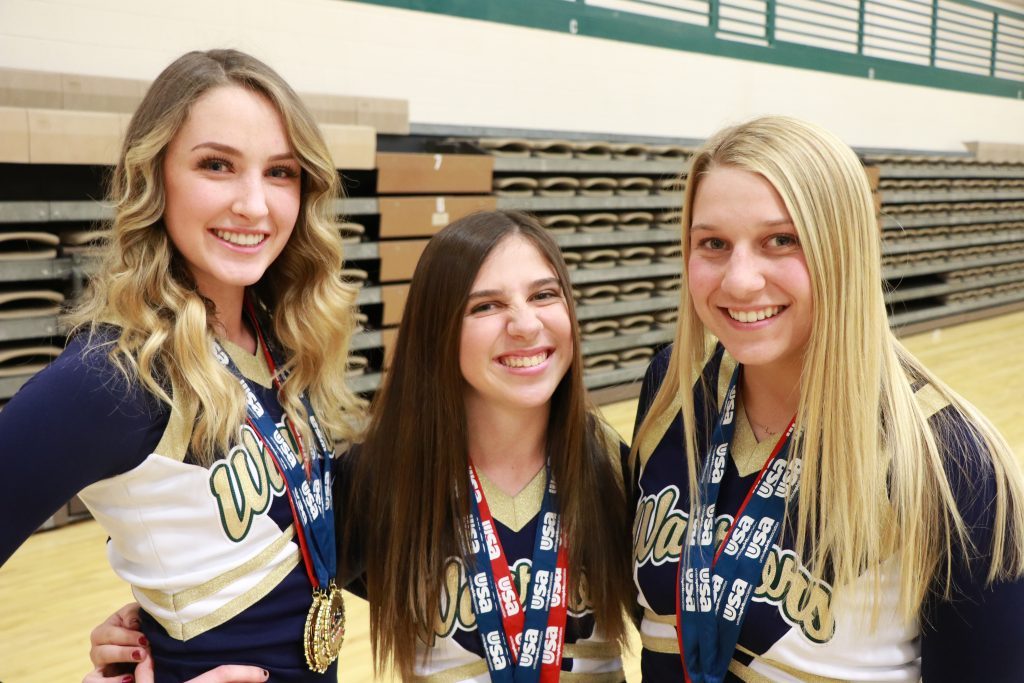 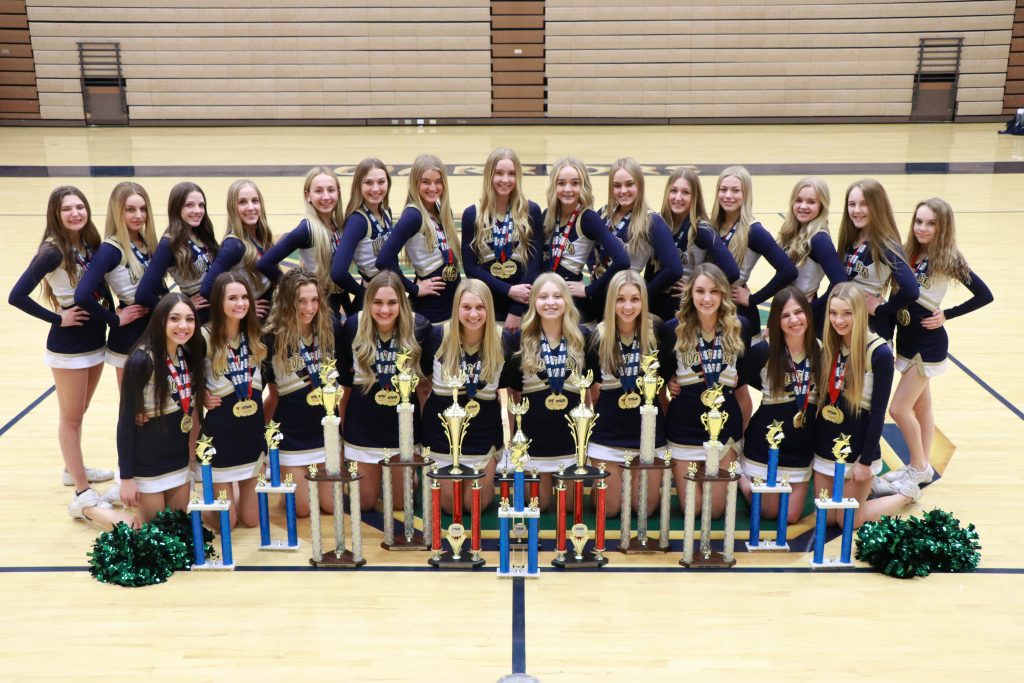 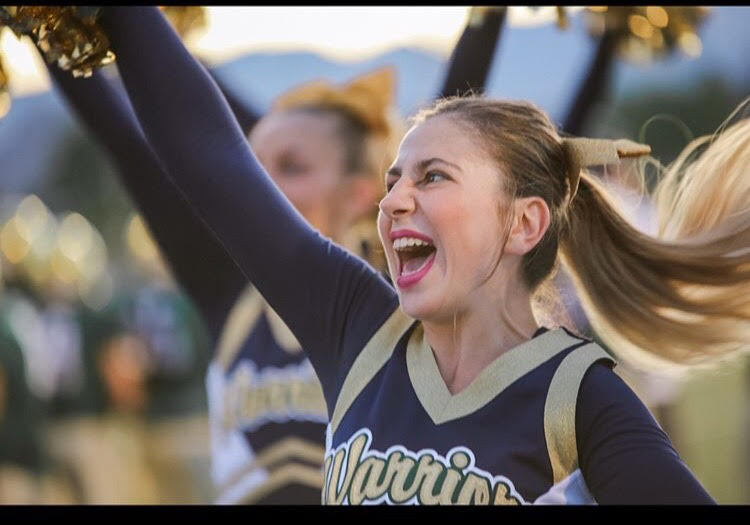 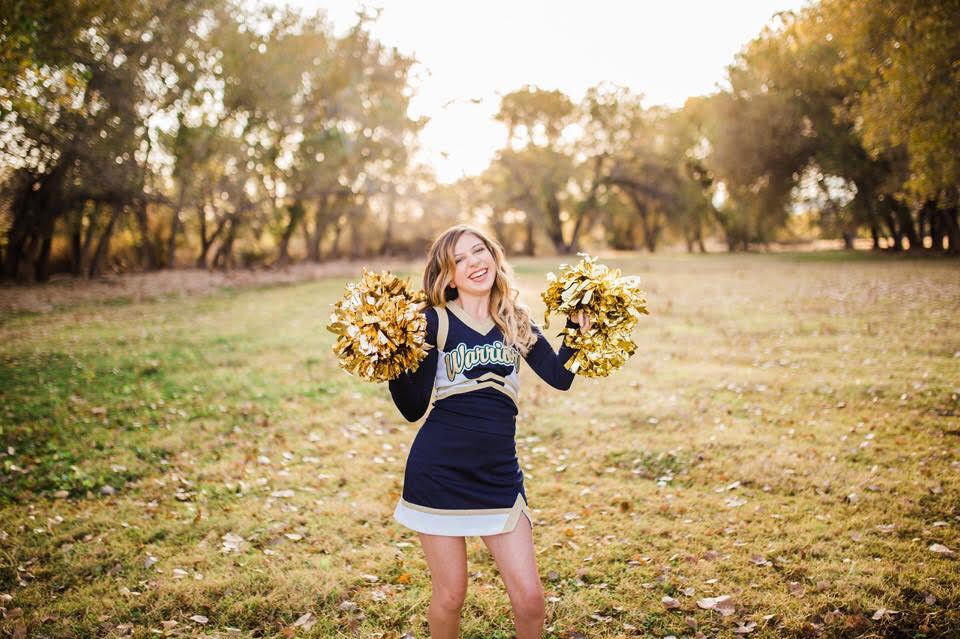 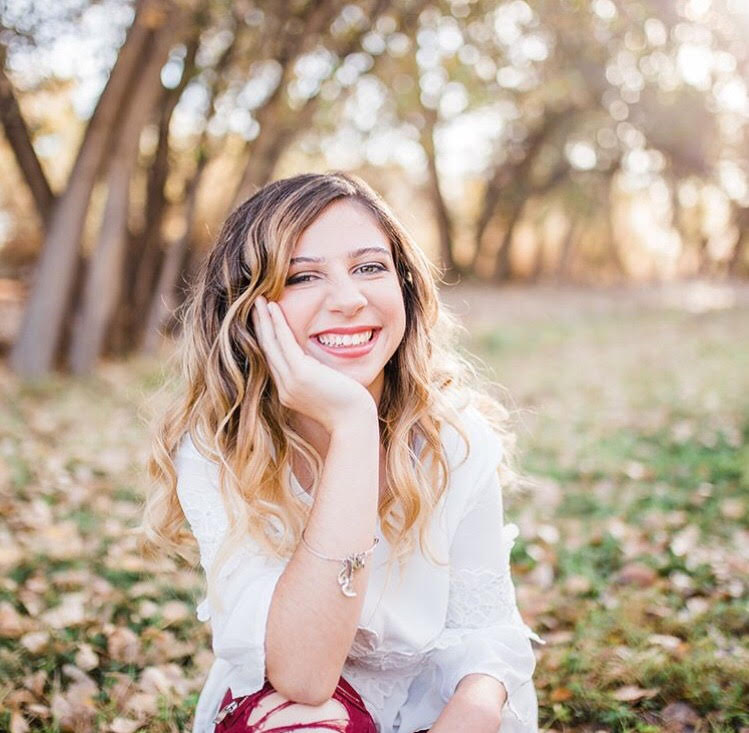 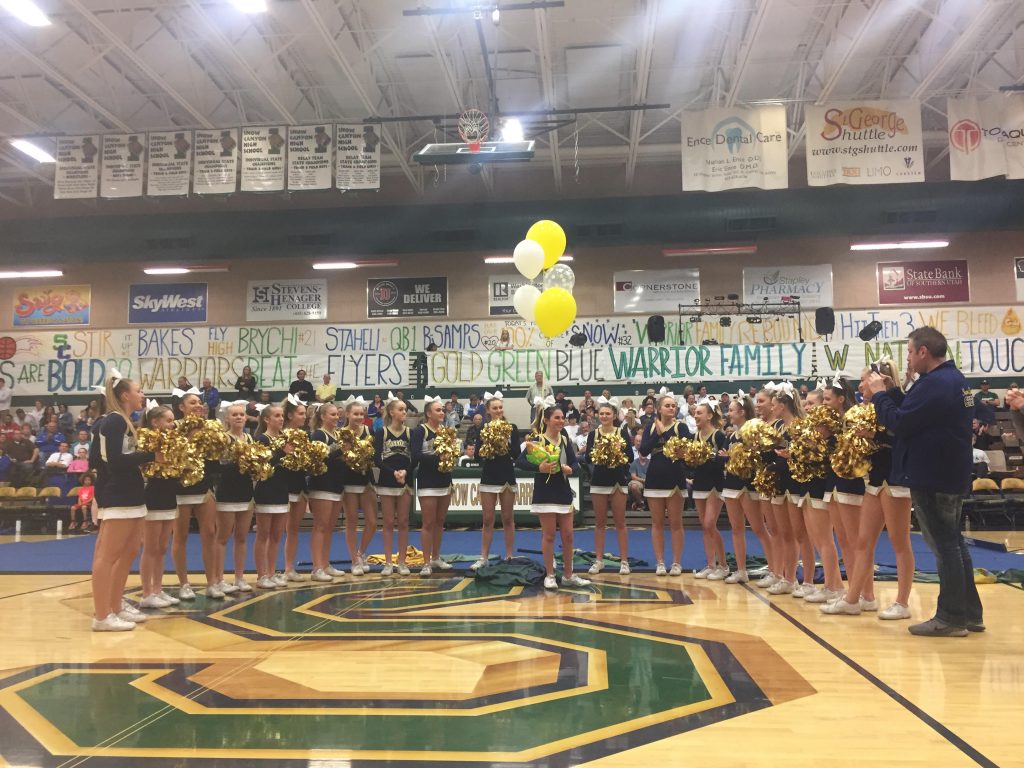 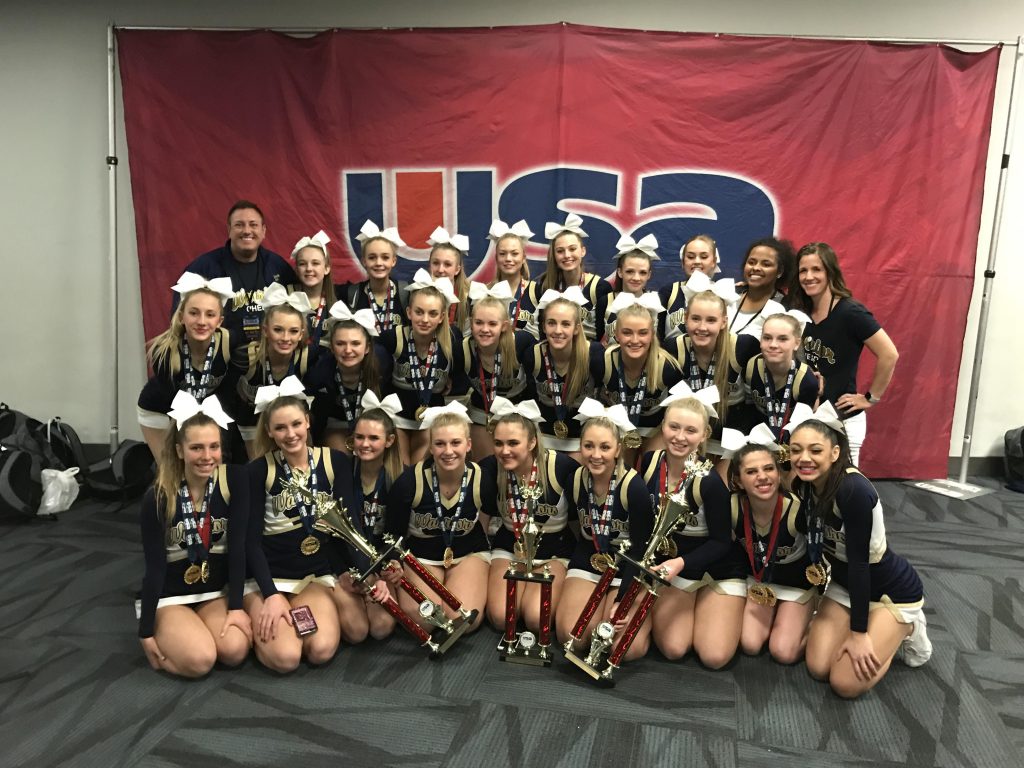