PROVO – BYU fell to No. 6 Gonzaga 79-65 in the last regular season game of the season Saturday night at the Marriott Center.

“First of all, congratulations to Gonzaga for winning the championship,” BYU assistant head coach Tim LaComb said. “We competed with them in stretches, but they had several guys step up and make plays and that’s what championship teams do. We were happy with some moments. In the first half it could’ve gotten away from us, but our guys really showed some character and got that thing back. We just have to move forward and get ready for next week and the tournament.”

“BYU has a really good offensive team and those top-three (Elijah Bryant, Yoeli Childs and TJ Haws) are a handful,” Gonzaga head coach Mark Few said. “They keep an opposing head coach up at night and to hold those three to seven field-goals in the second half is about as good as you hope for.”

A Hardnett 3-pointer was the first basket of the game, putting the Cougars up 3-0, but Gonzaga went on to score two more baskets, taking a 4-3 advantage.

After a jumper from Childs, the Bulldogs went on a 16-3 run, putting BYU behind by double-digits, 20-8 with 12:51 remaining on the clock in the first half.

The Cougars brought the score within six points after an 8-0 run, 26-20 with 8:43 left, but Gonzaga capitalized on BYU fouls and again increased their lead to double-digits, 32-22.

Back-to-back 3-pointers from Bryant brought the Cougars within two points with 2:17 to go in the first half, 38-36.

The Bulldogs closed out the first half with a 3-pointer and the Cougars went into halftime behind, 43-38. At the end of the half, BYU was shooting 48 percent from the field while the Zags were shooting 57 percent.

Gonzaga opened up the second half with a three-pointer making the score 46-38. The Bulldogs continued to push their lead as they increased it to double-digits at 52-41. 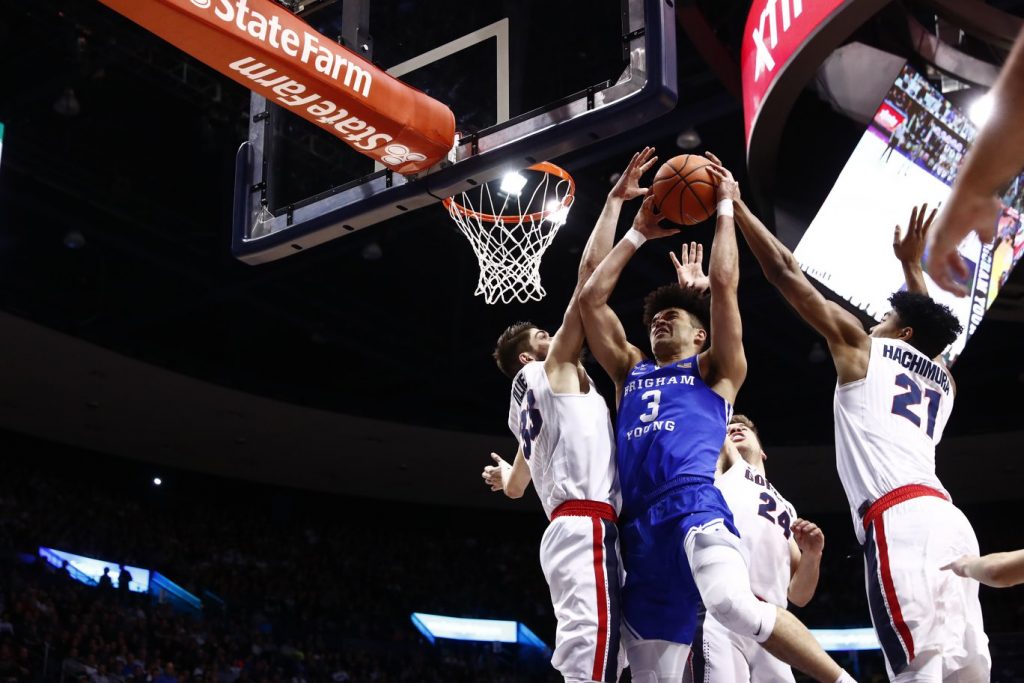 At the conclusion of the game, BYU shot 38.6 percent from the field compared to the Zags 55.4 percent.

“They hit shots and we couldn’t. It’s pretty much plain and simple,” said BYU guard Elijah Bryant. “We had open shots and they just weren’t going down. They have a lot of guys so we have to guard them. They have a ton of guys off the bench, making it difficult at times, but we just have to hit shots to put ourselves in a better position.”

The Cougars will now prepare for the West Coast Conference Championships in Las Vegas. The quarterfinal round begins on Saturday, March 2.

Player Notes
Yoeli Childs scored 19 points for his 29th game in double-figures. He also grabbed eight rebounds and had one block.

The Marriott Center had a sell out crowd tonight with 18,987 in attendance.

Childs, Bryant lead the way in BYU rout of Portland