PORTLAND, Ore. — The BYU men’s basketball team earned a 72-60 win over Portland in its final road game of the regular season on Thursday night in the Chiles Center.

“It was a good win and I thought our guys were really dialed in on the two things we really emphasize,” BYU head coach Dave Rose said. “That was to be your best competitive self and be connected to each other. I thought it really showed on the defensive end.”

“We knew coming into this game that they would give a lot of attention to [Haws] and [Bryant] on the perimeter and that really opened things up for one-on-one isolations on the block,” Nixon said. “We wanted to take advantage of that and get everybody involved tonight.” 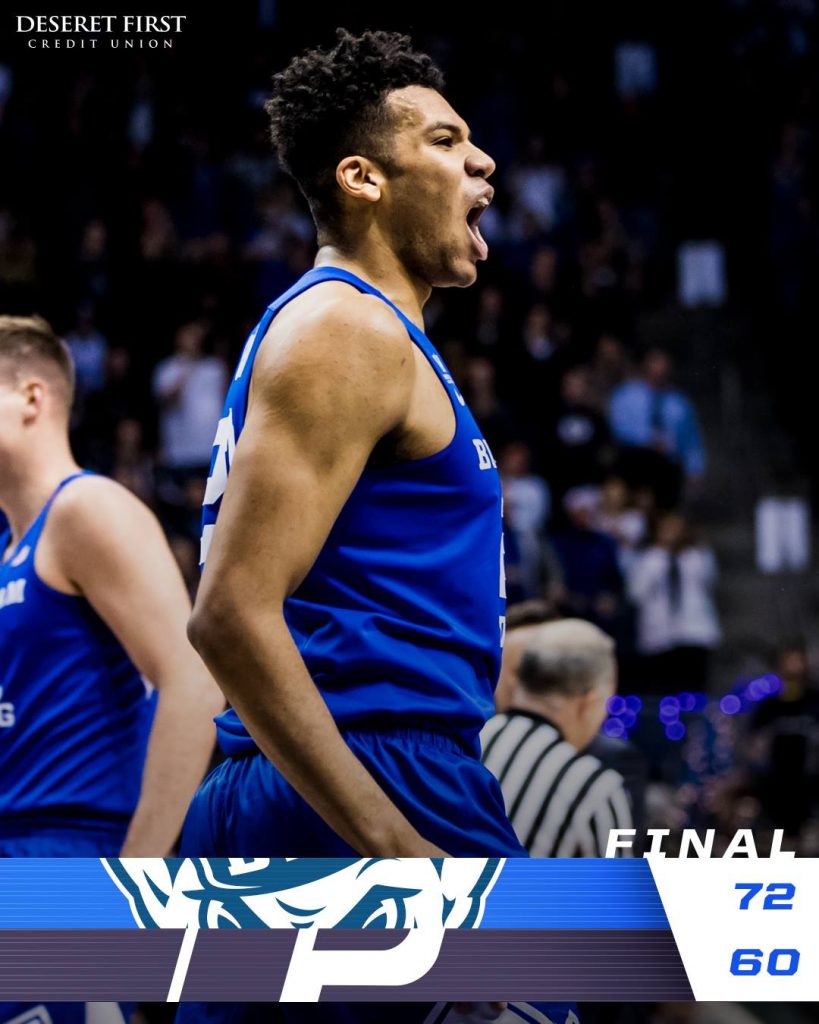 Childs ended Portland’s run, scoring on one end of the court and grabbing a steal on the other end, as BYU fought to stay on top. The Cougars went on an 8-0 run to take a 19-11 advantage with 10 minutes to go before halftime.

Bryant converted on a 3-point play to give BYU a double-digit lead, 24-13, respectively. Back-to-back treys by the Pilots brought them within five but was answered by Nixon’s own bucket from beyond the arc.

Another 3-pointer by Nixon gave BYU a 12-point lead, 32-20 with 6:18 on the clock. Through the remaining minutes in the first half, the Cougars consistently kept the double-digit lead and ended with back-to-back buckets by Bryant and Zac Seljaas, extending BYU’s lead to 42-28, the largest of the half.

Nixon continued to find the hoop as he opened up the second half, scoring six of the Cougars’ first eight points for a 50-32 lead.

The Pilots went on a 9-0 run to cut the deficit to nine points, 50-41, with 12:07 left in the game. Luke Worthington’s first bucket of the night slowed down the Portland offense before layups by Bryant and Haws put BYU back on top 58-45 with nine minutes to go.

With just over five minutes left in the game, the Pilots hit a 3-pointer to cut the Cougar lead to nine points, 63-54.

BYU concluded the night with points by Jahshire Hardnett and Seljaas to secure its 72-60 win over Portland.

BYU closes out the regular season on Saturday, Feb. 24, as the Cougars host No. 6 Gonzaga at 6 p.m. MST in the Marriott Center. The game will be televised on ESPN2. Audio broadcasts will be available on BYU Radio (Sirius XM 143), BYU Sports Network and Easy 101.5 in St. George.

Postgame Notes
Yoeli Childs finished with 15 points, 13 rebounds, three assists, one block and one steal. It was his 28th game this season scoring in double figures and his 14th double-double of the season, 19th of his career.

Elijah Bryant finished with 15 points, six rebounds, two assists, one block and one steal and hit two 3-pointers. It was his 25th game scoring in double figures and 22nd with multiple 3-pointers.

Stats: BYU at UP Box