ST. GEORGE — It was Aug. 26, 2017, when Brig Murdock hooked himself to the rope as he prepared to rappel down a 100-foot cliff into a Southern Utah slot canyon. It was a procedure Murdock had carried out countless times, but on this particular day, as he leaned back, all of a sudden the walls of the canyon were rushing up on either side of him.

“I couldn’t believe what was happening,” Murdock said. “As I realized I was falling, I thought, ‘This isn’t going to be good.’”

As he plummeted, Murdock said he looked down to see where he was going to land. But there was no stopping the inevitable. After falling about 100 feet, Murdock hit the bottom of the canyon.

“For a couple seconds, I didn’t know if I was going to make it,” Murdock said. “But a couple of seconds later, I felt myself breathing, and I could hear the people in my group screaming.”

Murdock said he fell in a seated position into a 2-foot-deep mud puddle. The mud splashed into his eyes and blinded him, he said. He was hurt and he was cold. But he was alive.

After hearing about his fall, Nick Smith, one of the Kane County Search and Rescue volunteers who later helped rescue Murdock, said he was surprised to hear that Murdock had fallen from that high and survived.

“It’s pretty dang rare to see someone fall from that height in a free fall and survive,” Smith said. “If the mud wasn’t there, he wouldn’t have survived at all.”

Murdock, 22, was a canyoneering guide for Zion Ponderosa Ranch Resort at the time and had been taking two vacationers on a canyoneering trip through Birch Hollow, a technical slot canyon just outside of Zion National Park.

Hiking, rappelling, down-climbing and even some wading or swimming are usually key elements of any canyoneering trip, Murdock said. Birch Hollow was no different. As a guide, he had memorized every twist, turn and drop of Birch Hollow and was experienced with all the skills and equipment necessary to descend the canyon, he said.

The first part of the trek through Birch Hollow was great, Murdock said. The people he was guiding through the canyon were loving the experience with no problems.

After lunch, Murdock said he prepared the people he was guiding to rappel down the big 100-foot rappel in the canyon. After giving them the radio, Murdock hooked his guests onto the rope and he belayed them from the top of the cliff as they rappelled to the bottom, meaning if anything went wrong for them, he could stop them from falling.

After his guests had made it to the bottom of the rappel safely, Murdock prepared to go down the rope.

After his 100-foot free fall, which took place in the early afternoon, Murdock said the first thing he did was move his legs and his feet to make sure he wasn’t paralyzed. He could move, but he said he was in a lot of pain.

“I looked up at the sky and said, ‘Heavenly Father, get me out of here,’” Murdock said.

Unaware of the extent of his injuries – later identified as a fractured pelvis, a compression fracture in his back and other scrapes and bruises – Murdock said he was able to pull himself up and walk out of the mud puddle where he had landed. He found a rocky spot to lay down again, and the two guests he was with put all of the backpacks on top of him to help him stay warm. One of the guests happened to be a trauma nurse and knew how to make sure he stayed in a stable position, which was a miracle, Murdock said.

“It was another miracle the radio worked,” Murdock said. “I never thought we’d get radio coverage down there. No one ever had radio contact in Birch Hollow.”

With the radio, they were able to contact an employee at the front desk of Zion Ponderosa Ranch Resort. Kane County Search and Rescue was called, but because of how remote Birch Hollow was, it would be hours until rescuers could arrive.

Two hours later,  a group of other canyoneering guides from Zion Ponderosa Ranch Resort arrived at the scene. One of them took the two guests through the rest of the canyon and back to civilization, while two others stayed with Murdock and lied down next to him to keep him warm.

“I was covered with mud – head to toe,” Murdock said. “It was freezing. And I couldn’t even open my eyes for about three hours because they were so muddy.”

It was another fours hours of Murdock lying in pain and shivering from the cold until Kane County Search and Rescue volunteers, including Smith, finally arrived with a helicopter. Murdock was strapped into a stretcher and lifted to the top of the cliff in a rescue basket by the helicopter, he said.

By the time Murdock was brought to the top of the cliff, it was already getting dark, so the helicopter had to leave Murdock behind for the night, Smith said.

A few search and rescue volunteers elected to spend the night with Murdock. They built a fire, let Murdock urinate in a Gatorade bottle and gave him food and medicine to last the night.

“We were worried about his hypothermia potential almost more than his injuries at that point,” Smith said. “It took a lot to keep him warm that night. It was a cold night too.”

Murdock’s positivity is something Smith said he noticed, even when he was laying in mud and in pain.

“He was a real class act, honestly,” Smith said. “Even though he had a broken back, he was extremely positive about the whole thing.”

As soon as the first light of dawn appeared the next morning, the helicopter returned to pick up Murdock. The helicopter landed in a field, and then Murdock was loaded onto a different helicopter and taken to Dixie Regional Medical Center in St. George.

“When I was in the helicopter, I remember being so happy,” Murdock said. “I had tears of joy. I was just so happy and so grateful to be alive.”

When Murdock first arrived at the hospital, he said the clothes were cut off him and the mud was hosed off him with a garden hose in the ambulance bay because he couldn’t get up to get in the shower.

Doctors ran an MRI test to identify the extent of his injuries, but there was no injury that he couldn’t fully recover from, which Murdock said surprised some of the doctors because of what had happened to him.

“My story had gone around the hospital, and all the nurses and doctors wanted to come meet me,” Murdock said.

Twenty-eight hours after being admitted to the medical center, Murdock was released. He was sporting a new back brace and crutches and said he was ordered to not lift anything or twist his torso.

After spending three weeks at his family’s home in San Diego, Murdock returned to Zion Ponderosa Ranch Resort, where he worked at the front desk of the recreation barn, scheduling people to go on canyoneering trips with other guides.

While Murdock said post-traumatic stress disorder from his ordeal was not an issue for him, Smith met up with him in Kanab to talk to him about recovering from that kind of accident.

Smith had taken an 80-foot fall in a canyon near the North Rim of the Grand Canyon in February 2017, he said.

“I hadn’t set up my rope correctly, and while it wasn’t a free fall, I hit the ground at about 35 mph on hard rock,” Smith said. “I was able to self-rescue and haul my self out. I limped back to my car and made it to the hospital in Kanab.”

Smith ended up being unscathed from his fall, he said. Doctors checked him but found no broken bones or major injuries of any kind. Smith’s fall was documented with a GoPro camera he was wearing and later posted on YouTube. He said he tried to share his experiences with PTSD and recovery to help Murdock.

“Human beings make mistakes no matter how many times we do something,” Smith said. “It just humbled me. I tried to give (Murdock) some of this wisdom as well.”

Murdock’s injuries required no surgery or even physical therapy. A couple months after his accident, Murdock said he removed his back brace for the last time. He had to regain muscle in his back and abdomen, but besides that, he said he is now nearly feeling back to normal again.

“I had an X-Ray a few weeks ago, and they said there is no more fracture in my back,” Murdock said. “My pelvis is healed now too. I’m not quite back to 100 percent, but I’m getting there.”

His injuries were no reason for Murdock to stop enjoying the outdoors. Having recently returned to San Diego, he has started running, swimming and even rock climbing again. He hadn’t been canyoneering again since his accident, but said he’d love to try again sometime.

“Each day, I get a little better,” Murdock said. “There were a ton of prayers that were sent my way. I’m sure they are part of the reason I’m still here.”

Murdock is now preparing for his next big goal in life: serving a full-time mission for The Church of Jesus Christ of Latter-day Saints. He is currently serving a part-time service mission for the LDS church, where he said he often uses the story of his accident to teach people in a California state prison near San Diego.

Murdock’s story of survival and recovery was life-changing and inspiring for him. Whenever he feels down, he said he reminds himself that he survived a 100-foot fall and that he should be grateful to be alive.

“If anything else went wrong, my leg could be shattered, I could be paralyzed or I could easily be dead,” Murdock said. “There’s a reason it wasn’t my time. The biggest thing I’ve realized is that I have a purpose here now.” 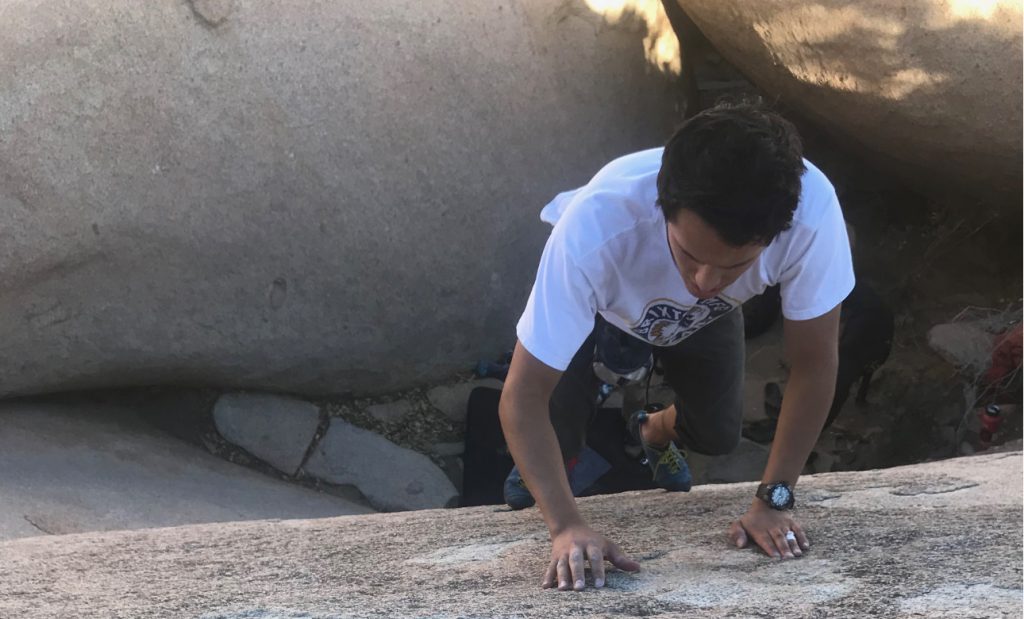 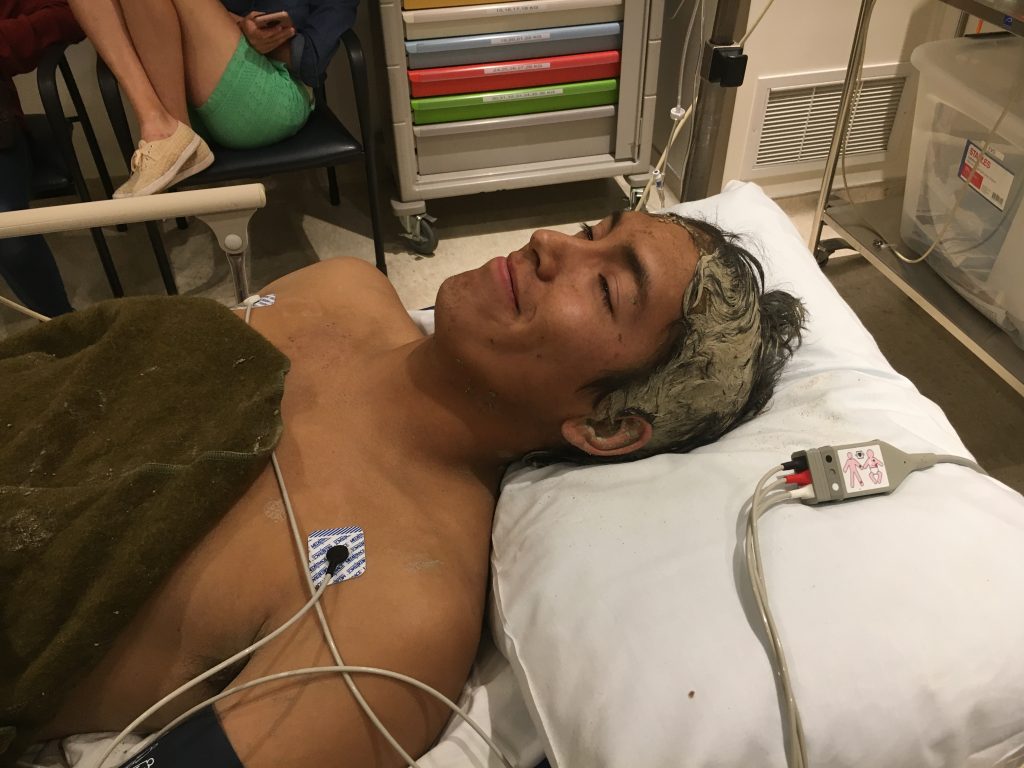 Brig Murdock, 22, lies in a room at Dixie Regional Medical Center after being rushed there in a helicopter, St. George, Utah, circa August 2017 | Photo courtesy of Brig Murdock, St. George News 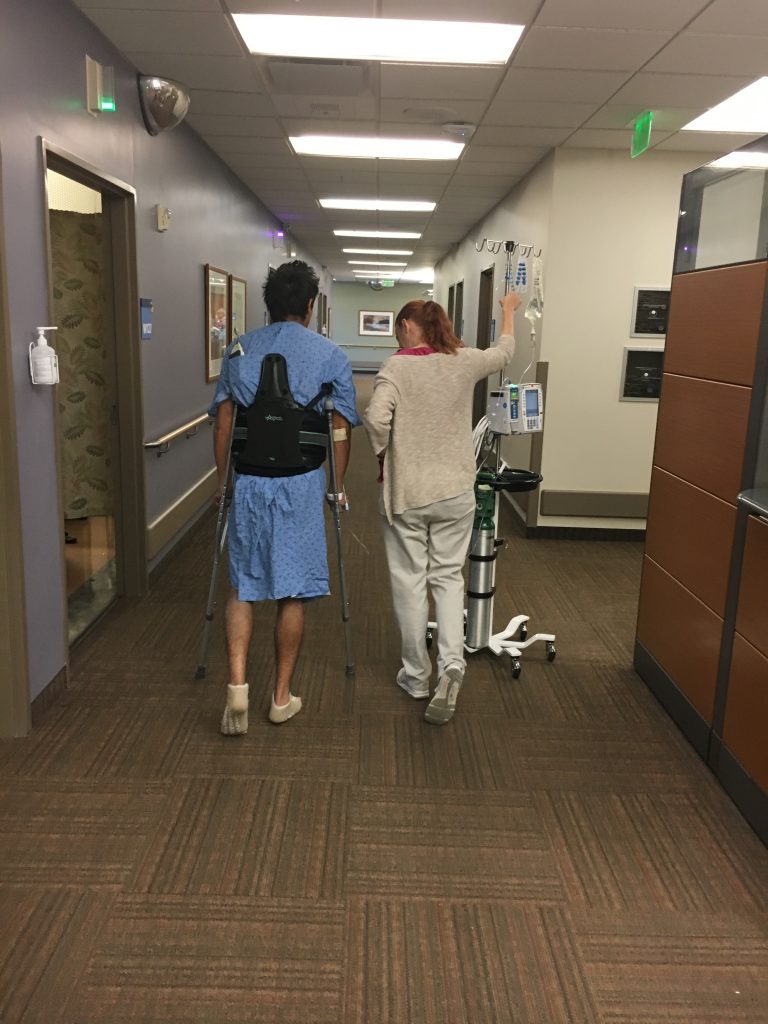 Brig Murdock walks with the help of a nurse at Dixie Regional Medical Center in St. George after his Aug. 26, 2017, accident, photo date not specified | Photo courtesy of Brig Murdock, St. George News 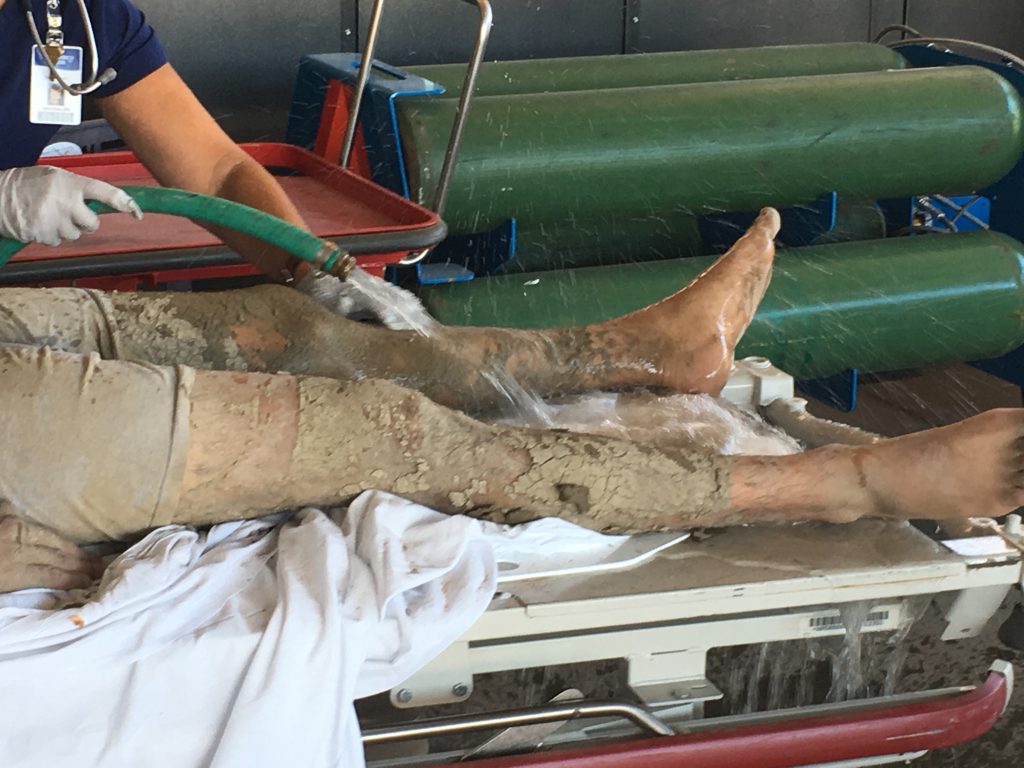 Nurses spray off Brig Murdock's muddy legs in the ambulance by of Dixie Regional Medical Center in St. George after Murdock arrived at the hospital via helicopter Aug. 27, 2017 | Photo courtesy of Brig Murdock, St. George News 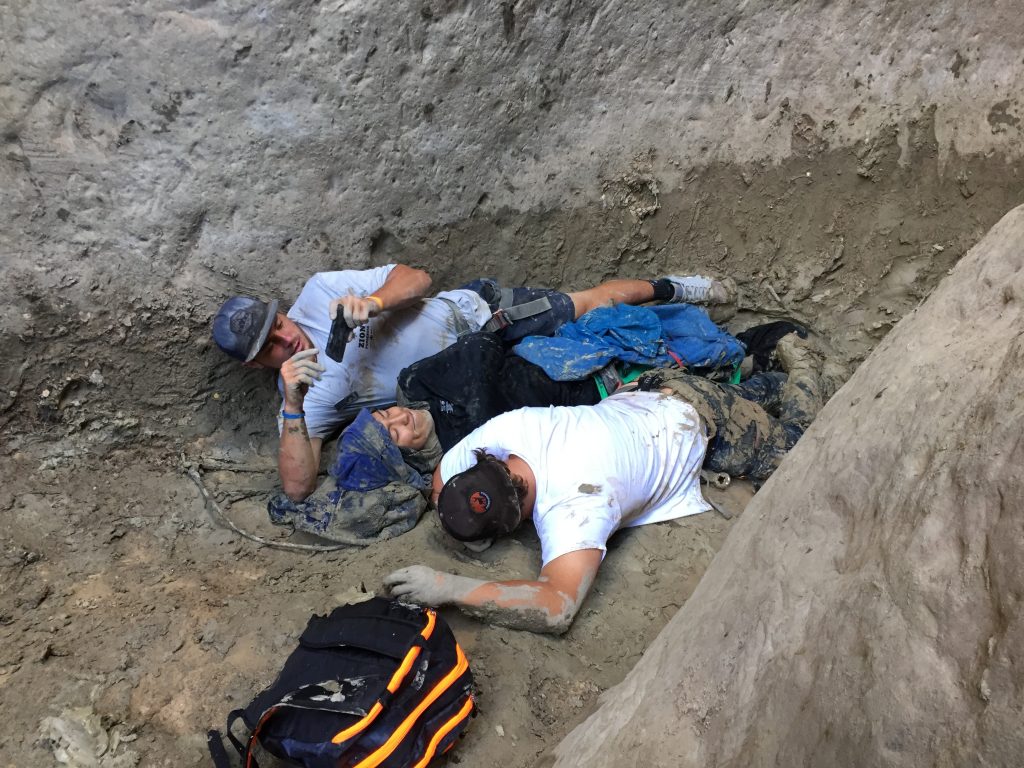 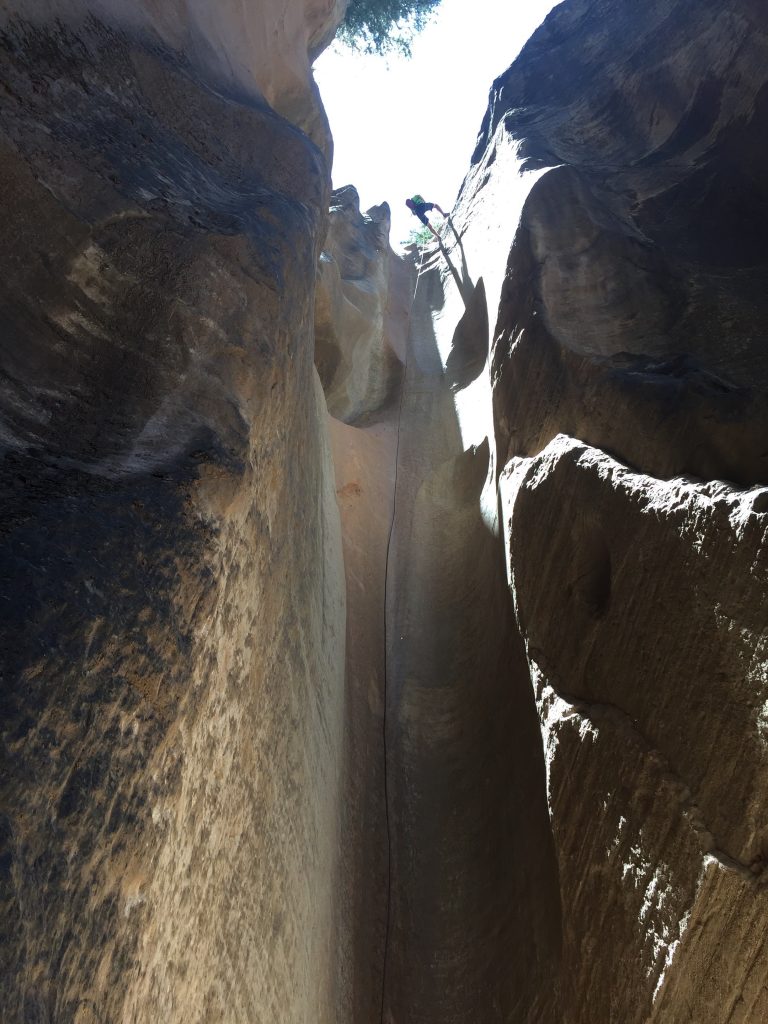 Man dies after falling 80 feet while rappelling in Southern Utah