LOS ANGELES – BYU couldn’t hang on to the basketball and it cost the Cougars dearly as they fell 76-69 to Loyola Marymount Thursday night in Gersten Pavilion.

“We really struggled to take care of the ball tonight and that is a formula for disaster,” BYU head coach Dave Rose said. “Out on the road, having 16 turnovers is a formula for a very tough night. We got behind and it’s hard to get the game the way you want it.”

The Lions took an early 4-0 lead before Bryant hit his first 3-pointer of the game. A three-point conversion by Zac Seljaas gave the Cougars their first lead, 8-6. 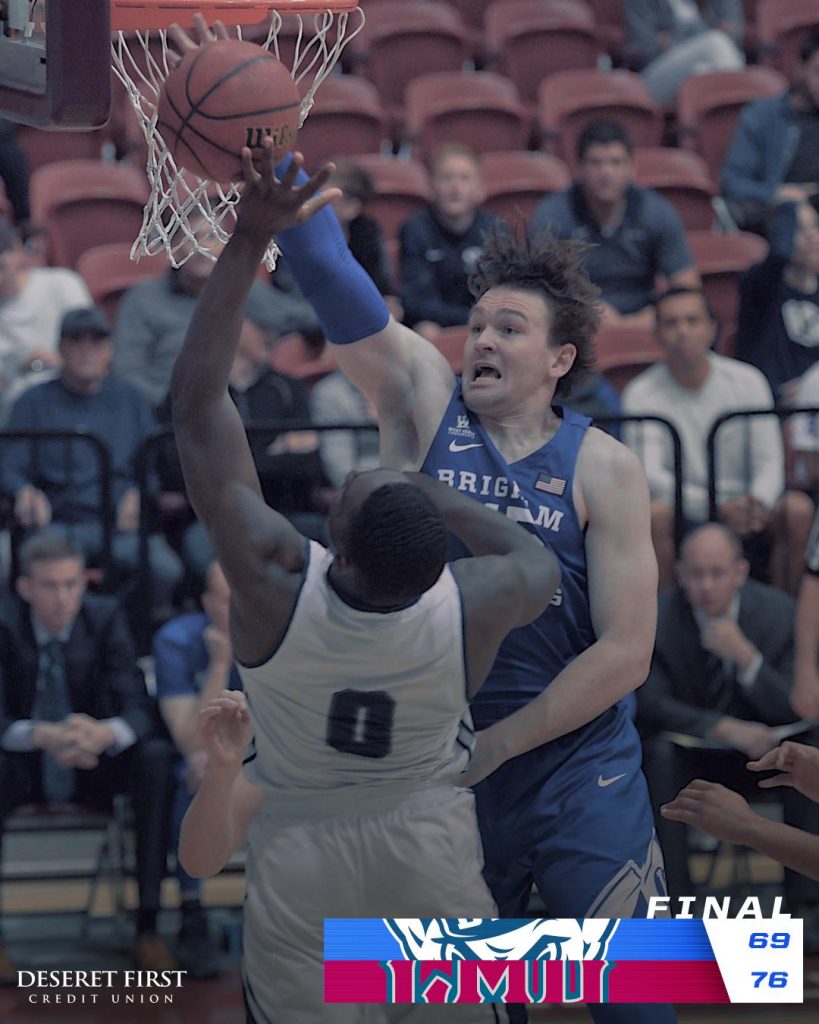 Payton Dastrup came off the bench and quickly scored his first bucket of the night to slow down the Lions offense with 10:30 remaining in the first half.

A 6-0 run by the Cougars, which included baskets by McKay Cannon and Childs cut the deficit to three points, 25-22.

LMU stayed in control for the remainder of the first half, taking a 42-31 lead into the locker room.

In the first half, the Lions shot 50.0 percent from the field while BYU shot 44.0 percent.

The first bucket of the second half came from Haws as he finished a three-point play, but another run by LMU extended the Lions’ lead to 49-34 with 16:18 to go.

The Lions consistently kept a double-digit lead over the next eight minutes, including a 16-point lead at the 12-minute mark.

Bryant scored the Cougars first trey of the second half to bring BYU within nine, 62-53. After a flagrant foul on LMU, Dalton Nixon converted on one free-throw and Childs’ three-point play brought BYU within reach, 62-57 with 6:11 on the clock.

But the Lions (7-15, 2-9) made free throws down the stretch to seal their second win in West Coast Conference play. The Cougars shot 46.3 percent from the field and 20.8 percent from beyond the arc. LMU finished the game shooting 44.1 percent.

“They are very physical and try to take the ball from you all of the time and you’ve got to be strong with it,” Rose said. “We were prepared for it, but didn’t execute very well. We talked all week long on the challenge of this game. We didn’t have our guys the way we normally have them. It was more a competitive problem. In the second half we fixed it, but just didn’t play well enough.”

LMU had not beaten the Cougars since 2013, when the Lions won 87-76 in Gersten Pavilion. Saturday’s win snaps a 10-game skid to BYU.

Elijah Bryant hit three 3-pointers, his 11th game this season with three-plus 3-point field goals. He has now hit a 3-pointer in 24-straight games, the third-longest streak of consecutive games with a trey in a single season in BYU history.

Bryant scored 24 points, his 10th game this season with 20-plus points. He also had a career-best three blocks.

Yoeli Childs finished with 15 points and 13 rebounds, his 11th double-double of the season. It was his 24th-straight game scoring in double figures.