A Honda minivan is damaged and the wheel of a GMC pickup truck lies in the middle of Telegraph Street in Washington City, Utah, Jan. 28, 2018 | Photo by Spencer Ricks, St. George News

WASHINGTON CITY — A man was arrested on suspicion of driving under the influence of drugs or alcohol after driving on the wrong side of the road and crashing into a minivan Sunday afternoon in Washington City.

Just after the crash occurred at around 1:15 p.m., Cluff, who was driving a GMC pickup truck, reportedly told an onlooker he was only texting.

While driving the pickup truck west on Telegraph Street, he crossed over the center line and began driving into oncoming traffic, Washington City Police spokesman Ed Kantor said, adding that Cluff drove for several blocks before hitting the back of a van, which was beginning to turn left.

The pickup truck lost its front passenger-side wheel in the collision. The driver then proceeded with only three wheels for another block, Kantor said, leaving a groove in the roadway from dragging machinery in his missing wheel well and then turned into a neighborhood on Jeffs Drive.

Cluff stopped in front of the house of Kayli Armstrong, who was at home with her children. Her children started shouting “There’s a car outside with three wheels,” Armstrong said. Armstrong then went outside to see what was going on and saw the man’s damaged pickup truck.

Cluff seemed like he was intoxicated, Armstrong said. He was playing with the airbags in his truck when she first saw him, she said.

“He was like, ‘Don’t tell them I was texting,'” Armstrong said. “I could tell he wasn’t texting. I then told all my friends some dude is about to get a DUI right in front of my house.”

Washington City Police arrived and arrested Cluff for suspected DUI, traffic violations and drug charges, Kantor said. He was taken to the Dixie Regional Medical Center for evaluation before being booked into the Purgatory Correctional Facility.

In the Honda minivan that the pickup truck had crashed into, there was an adult female driver and two juveniles, Kantor said. They were checked at the scene by Washington City Fire and Gold Cross Ambulance personnel and were not transported to the hospital.

This report is based on preliminary information provided by law enforcement and may not contain the full scope of findings. Persons arrested or charged are presumed innocent until found guilty in a court of law or as otherwise decided by a trier-of-fact. 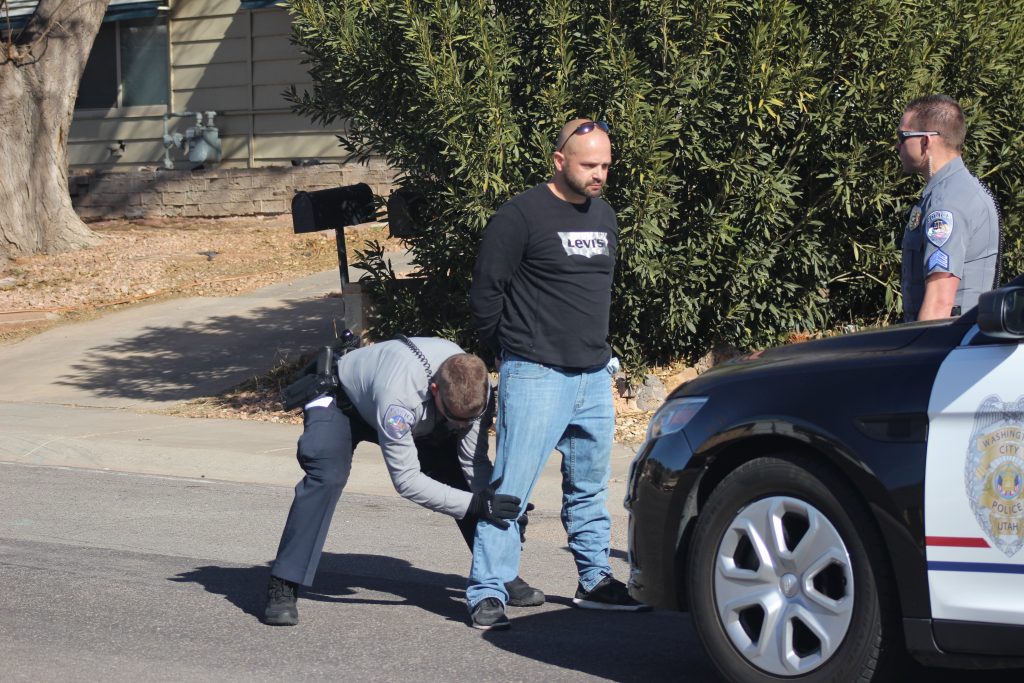 File photo from January showing police arresting a man for suspected DUI after he rammed his pickup truck into a minivan in Washington City, Sunday, Jan. 28, 2018 | Photo by Spencer Ricks, St. George News 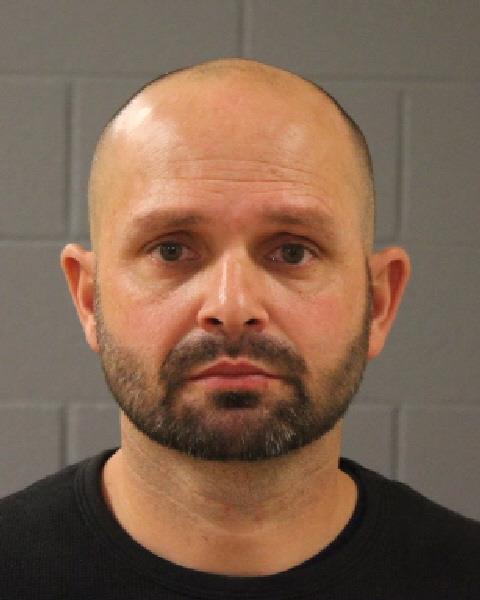 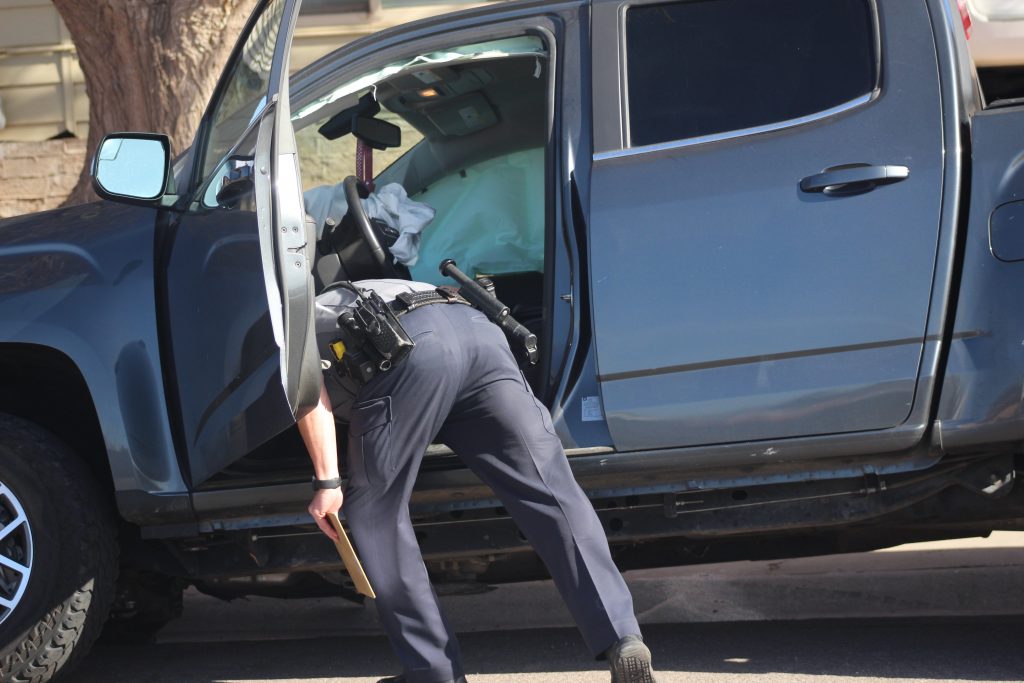 A Washington City Police officer searches the interior of a pickup truck after its driver crashed into a minivan Sunday. The driver of the pickup truck was arrested on suspected DUI, Washington City, Utah, Jan. 28, 2018 | Photo by Spencer Ricks, St. George News 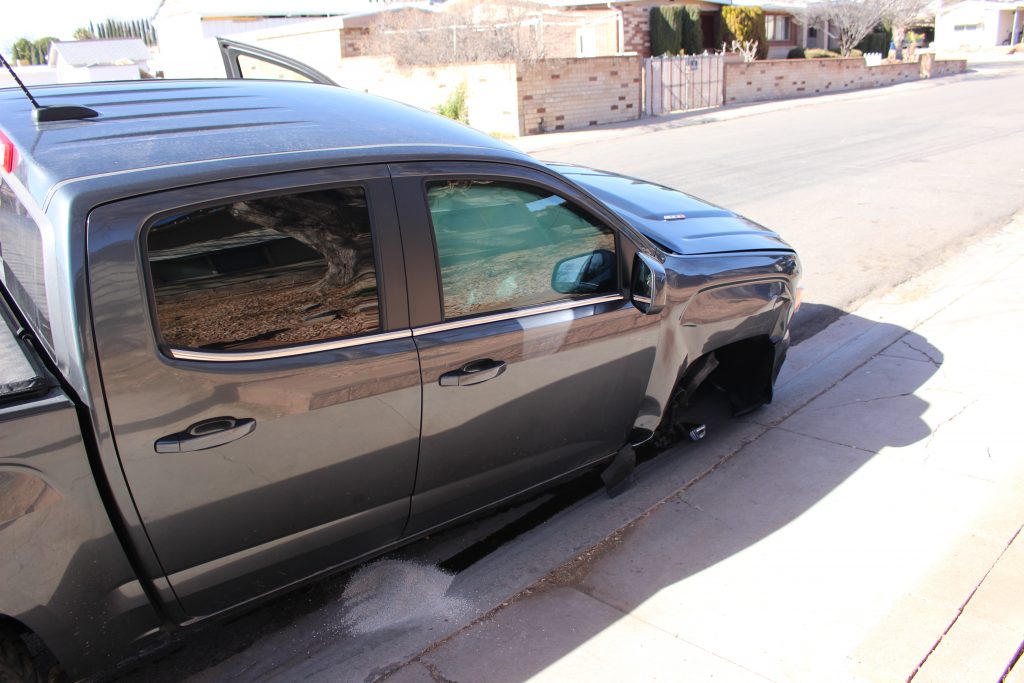 A GMC Sierra pickup truck is damaged and missing a wheel after crashing into a minivan Sunday. The driver of the pickup truck was arrested on suspected DUI, Washington City, Utah, Jan. 28, 2018 | Photo by Spencer Ricks, St. George News 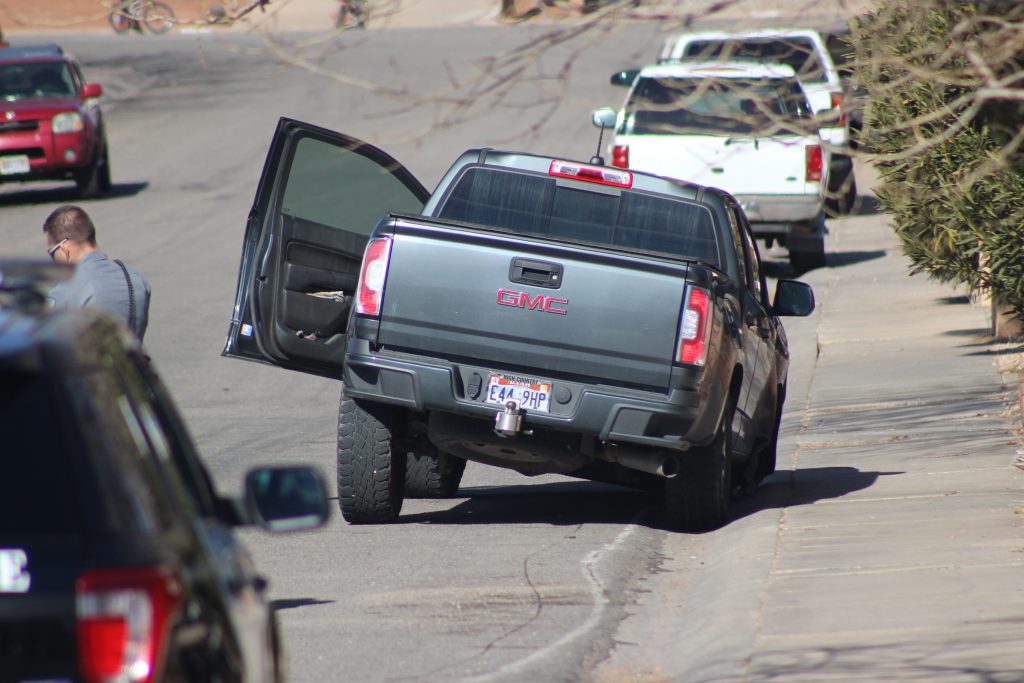 A GMC pickup truck rests in the road after being driven one block with three wheels, leaving a groove in the roadway Sunday in Washington City, Utah, Jan. 28, 2018 | Photo by Spencer Ricks, St. George News

Suspected DUI on southbound I-15 causes chain reaction of collisions

Driver suspected of DUI crashes into semi, goes to jail

DUI suspected in triple-car crash on overpass; occupants of one vehicle in serious condition