ST. GEORGE – The second half of Region 9 play began Friday night and turnabout was fair play around the league.

Snow Canyon avenged a home loss to Pine View a month ago by beating the Panthers on their floor Friday. It was a blowout, and then it wasn’t, as Pine View rallied from 19 down to make it a two-point game in the closing seconds. Canyon View followed suit by avenging a home loss to Hurricane from last month. The Falcons have won four straight. The only home team to take care of its court was Desert Hills, which blew out Cedar for the second straight time and grabbed ahold of solo second place in the region.

Here’s a look at the action:

A month ago, Pine View made the trip across town and dismantled the Warriors by 22 points. SC turned the tables Friday night behind the hot shooting of senior Braden Baker and sophomore Kade Guerisoli … and a much better defensive effort. In that first meeting, the Panthers scored 69 points, but this time around PV managed just 52.

“That really is the biggest difference – defense,” SC center Joey Robertson said. “I think we found a new identity on defense. We were just up in their grill and they seemed afraid to shoot on us.”

Indeed, in the first three quarters of the game, Pine View had made just eight field goals and had just 27 points. During that time, Baker had compiled 16 points and Guerisoli scored his first nine points of the season as the Warriors raced out to a 46-27 lead.

Well, not quite. Pine View staged a furious rally in the fourth quarter. Jack O’Donnell, who was held scoreless in the first half, started to hit from everywhere. And Michael Moten, who had four 3-pointers all season, hit two straight deep balls as the Panthers put together a 19-2 run to close within 54-52 with under a minute to go.

After an exchange of turnovers, Panther sophomore Ryan Hopper took a nifty drive to the right side of the basket with 15 seconds left. His running bank shot looked good, but just caromed out of the receptacle, leaving Pine View with no choice but to foul to try and save the game. Austin Staheli made one free throw to put it at a three-point game and Pine View’s running 40-footer at the buzzer was off the mark.

During the big fourth-quarter run, Pine View made five 3-pointers, including two by Moten and one each by O’Donnell, Hopper and Hunter Moore. O’Donnell also had a couple of impressive drives in the lane and ended up with a team-high 16 points.

Neither team did itself any favors at the free throw line. While trying to hold onto that lead, Snow Canyon was a miserable 2 for 8 from the line in the fourth quarter. Fortunately for the Warriors, Pine View was equally inept at the charity stripe, hitting just 8 of 20 in the game.

Baker was the top scorer with 19 points, with Robertson finishing with 12. Guerisoli, playing in just his second varsity game for Snow Canyon, made two 3-pointers and had nine points. The Warriors outrebounded Pine View 27-20 and made 22 of 42 field goals for 52 percent.

Moore made 5 of 8 3-pointers in the game, including four in the first quarter as Pine View trailed just 14-12 after one. But Guerisoli’s pair of treys helped the Warriors surge to a 32-27 halftime lead.

It was pretty much a must-win situation for the Warriors, who are still in a hole at 2-5 in region play (6-11 overall). SC still has road trips to Cedar and Hurricane and a couple of home games against league-leaders Dixie and Desert Hills. The Warriors’ next contest is a home game next Wednesday against the Thunder. DH beat Snow Canyon 56-45 a couple of weeks ago.

Pine View (2-5 and 6-10) has a tough road ahead, starting with a road game at Dixie next Wednesday night.

It was Round 2 of the marquee matchup between CV’s Brantzen Blackner and HHS’s Jackson Last, the top two scorers in the region. But, as is the case with many of these types of matchups, it was a support player that stole the headlines.

Sophomore Trevor Farrow nailed his fifth 3-pointer of the game with just over a minute to play to break a 49-49 tie and help the Falcons capture the stunning road win.

“He’s our only sophomore that starts and he’s been in a bit of a slump,” Falcons coach Rob Potter said. “He’s always been a great player, from fifth, sixth, seventh grade and he’s a great shooter and a heady player. But sophomores go through that sometimes and we just told him to be patient and keep shooting. He hit three 3s in the fourth quarter and all of them were in big spots.”

None bigger than the last one. Hurricane had just completed its comeback after a basket by Matt Meyers and a 3-pointer from Last. But Farrow was undaunted and calmly nailed the go-ahead bucket as time dwindled.

Following Farrow’s trey, Hurricane turned it over and Mason Lyman scored a layup to push the lead to 54-49 with 38 seconds to play. Blackner hit an insurance free throw seconds later to complete the CV victory.

“No question the difference tonight from the last time we played them was rebounding,” Potter said. “When we lost to them at our place, we had 11 rebounds total in the game. They still outrebounded us, but tonight we had 22 defensive rebounds and that was huge.”

Last, who leads the state in scoring and had 43 points Wednesday night in Hurricane’s win over Snow Canyon, was held to 10 points through the first three quarters.

“I told the guys to be ready, that he was going to come hard in the fourth quarter and he did,” Potter said. “But we handled it and came out with the win.”

Potter praised the efforts of Tyson Potter and Parker Holmes, both of whom took charges from Last.

Hurricane led by 11 (18-7) two minutes into the second quarter, but a couple of Farrow treys started the comeback for the Falcons. By halftime, the lead had been whittled down to 21-15.

The third quarter was all Canyon View. A Joey Lambeth free throw made it 21-16 and then Lambeth and Blackner hit back-to-back treys to give Canyon View a 22-21 lead. Russell Neild tied it at 22-22 with a free throw, then Toby Potter nailed one from deep to give the Falcons a 25-22 lead.

With Blackner heating up, the lead grew to 40-32 heading into the final period. In the fourth, Last capped a 7-0 run with a 3-pointer to make it 40-39 with just over six minutes left. The score stayed tight until Farrow hit consecutive 3-pointers to make it a 49-42 CV lead with under three minutes left.

But Last wasn’t done and he hit a mid-range jumper and a trey to cut it to 49-47, followed by Meyers’ inside basket that tied the game at 49-49, setting up the late-game heroics from Farrow.

Blackner finished with 18 points, 10 rebounds and five assists, while Farrow had 15 points and Lambeth had seven points and seven assists. Canyon View made 10 of 24 3-pointers (42 percent) in the contest.

Last finished with 23 points to lead Hurricane. He also had 12 rebounds and five assists, while Reagan Marshall added 10 points and six boards. The Tigers ended up with a 33-24 advantage on the glass and made 5 of 16 treys (31 percent).

Canyon View, winner of four straight region games, improves to 9-10 overall and 4-3 in region play. The Falcons are at Cedar Wednesday night.

Hurricane, 10-7 and 4-3, has a bye next Wednesday and will resume region play with a visit to Pine View next Friday night.

It wasn’t a sexy win for the Thunder, but it was an important one after having lost two straight.

“It was right there on top of the white board in pregame – intensity,” D-Hills coach Wade Turley said. “We came out lackadaisical after we got that big lead against Canyon View Wednesday and we’re trying to teach these guys that we’re just not good enough to take vacations during games.”

This time around, the Thunder were fired up to play a full 32-minute game. Early on, the intensity and fire worked as the Thunder raced out to a 10-point lead in the first quarter.

But the Redmen, winners of just one region game so far, didn’t roll over. Cedar battled back within five at halftime and the Redmen cut it to two in the third quarter.

“I didn’t take a timeout. I wanted the kids to figure it out themselves,” Turley said. “We hit a couple of 3s and forced a couple of turnovers and we settled down after that. Cedar started pressing then and we shot a ton of free throws.’

The Thunder ended up shooting 34 charity shots in the game, most of those in the fourth quarter. Desert Hills totaled 25 of 34 from the line (73 percent).

Turley praised the play of Ryan Marz and Tyler Webber. Marz battled foul trouble all game, but ended up with an impressive 11 points and 13 rebounds. Webber was the defensive “stopper,” and had seven deflections to go with nine points and two steals. Tucker Peterson led the Thunder with 15 points.

“Ty Webber didn’t shoot the ball all that well from 3 tonight, but he came in and played great defense and made all of his free throws,” Turley said. “We usually put him on the other team’s best shooter and he’s taken on that role and done a really good job with it.”

Desert Hills improves to 5-2 in region play (12-5 overall), in second place, one game ahead of both Hurricane and Canyon View. The Thunder are at Snow Canyon Wednesday night. 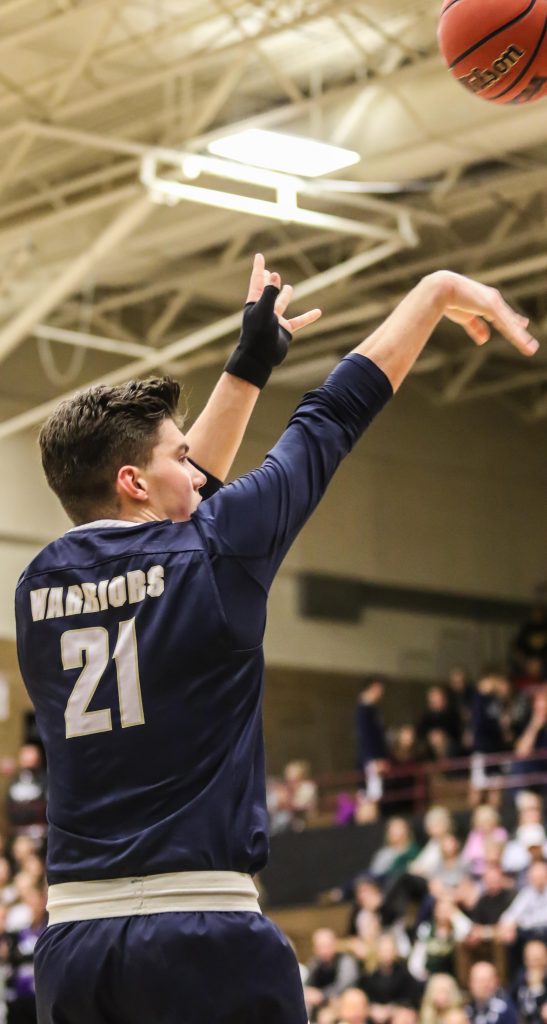 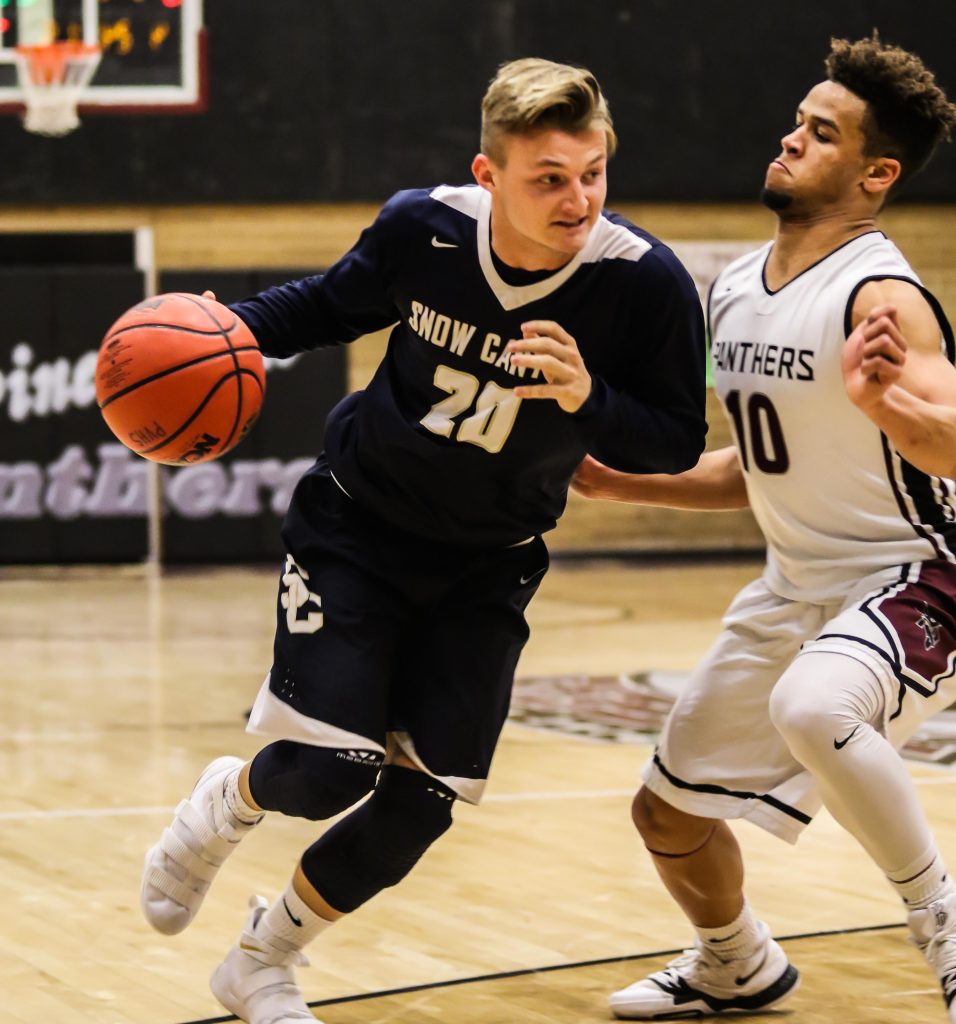 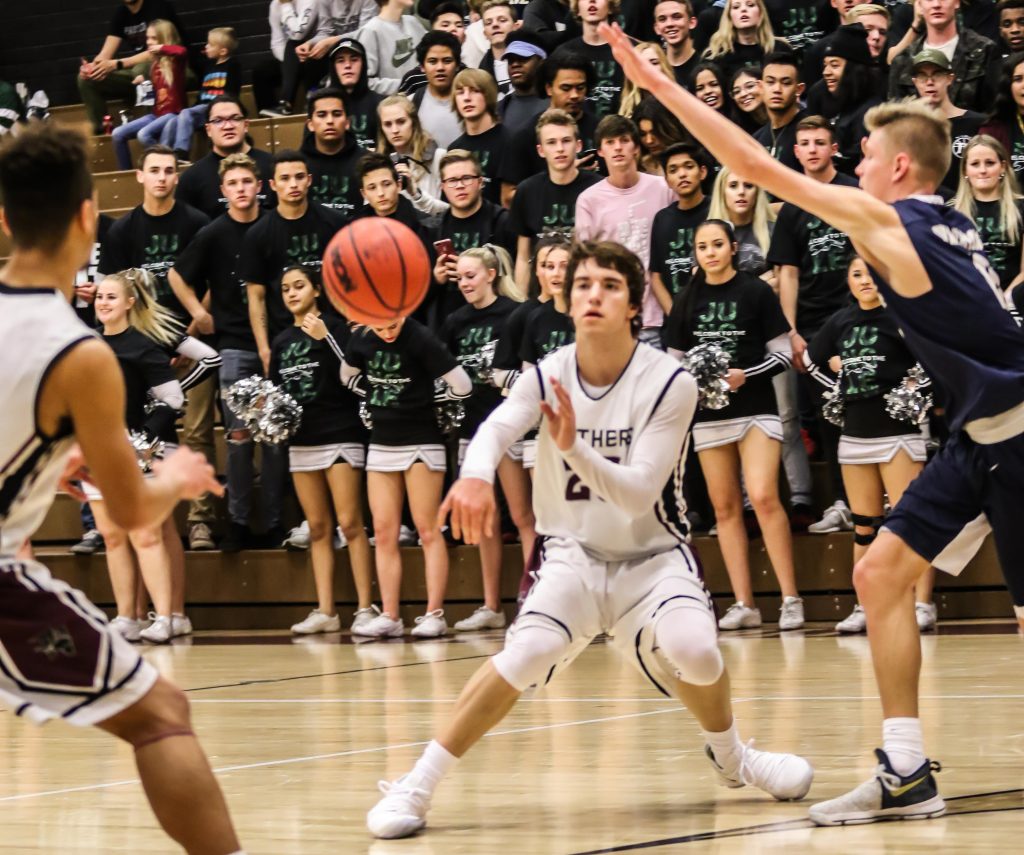 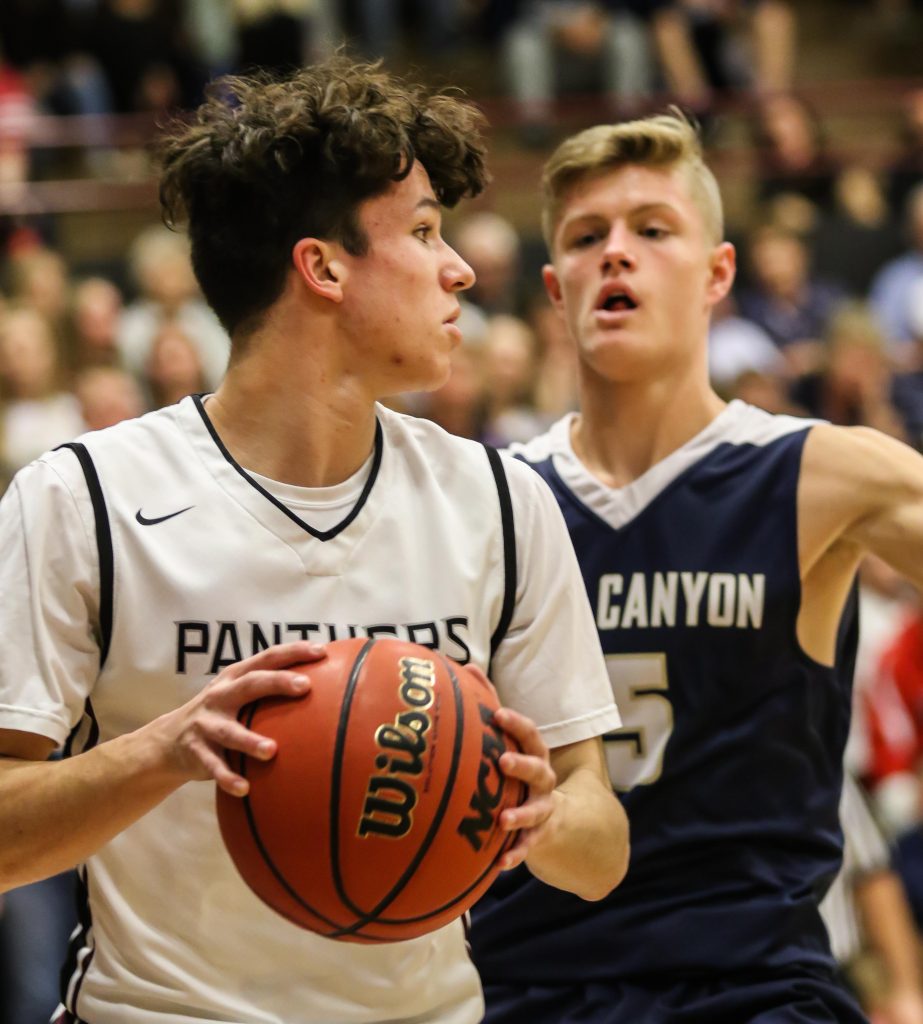 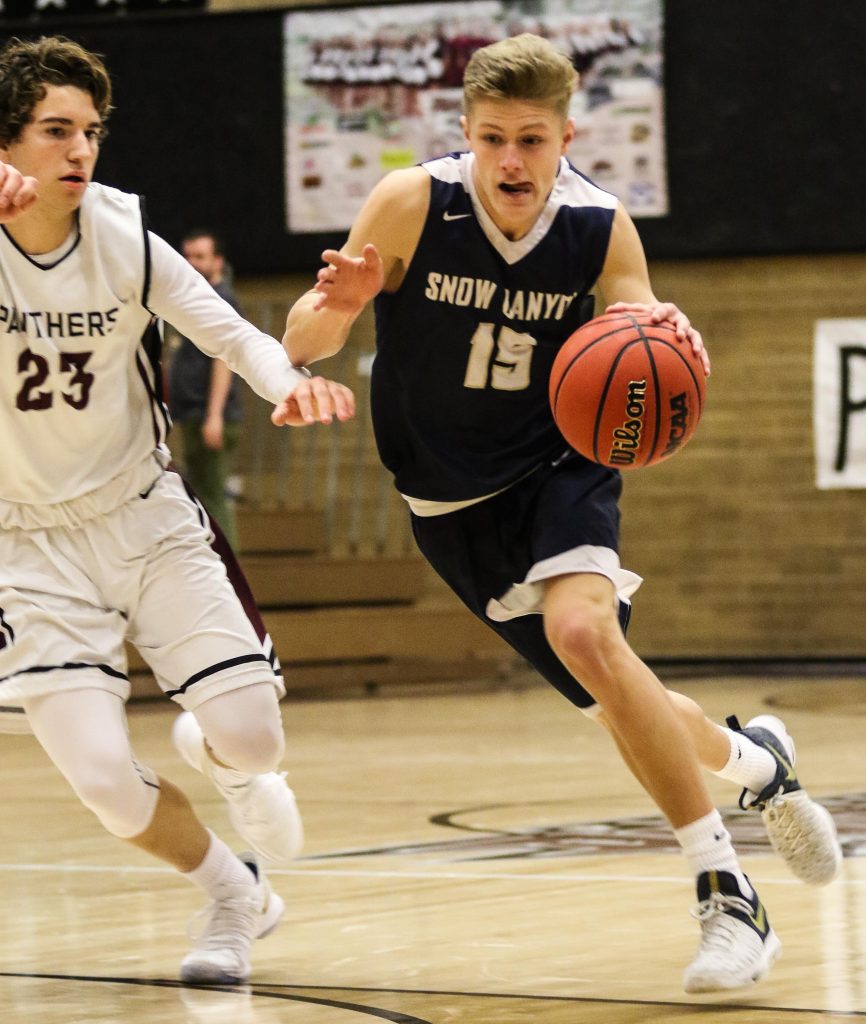 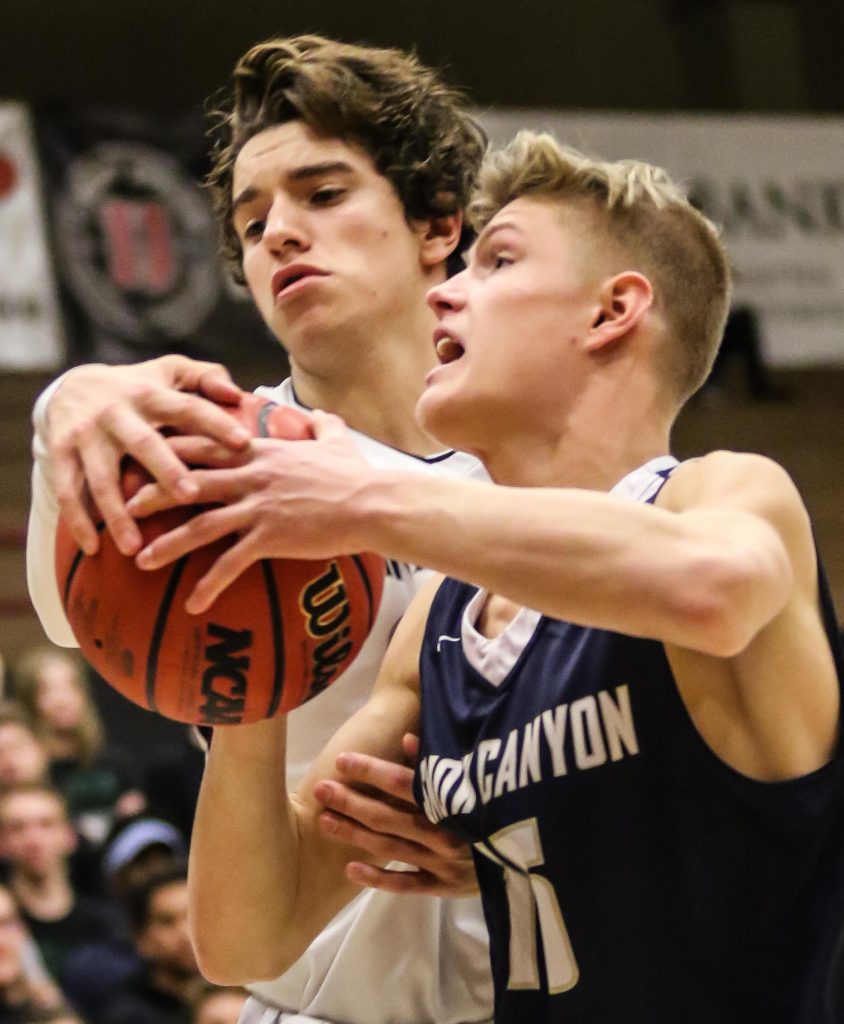 Wilgar at the buzzer ... Dixie survives with 2-point win