“The turning point was right about the eight-minute mark in the second half,” BYU head coach Dave Rose said. “We had slacked a little bit defensively but our guys were determined. Defensively, we did a heck of a job late in the game.” 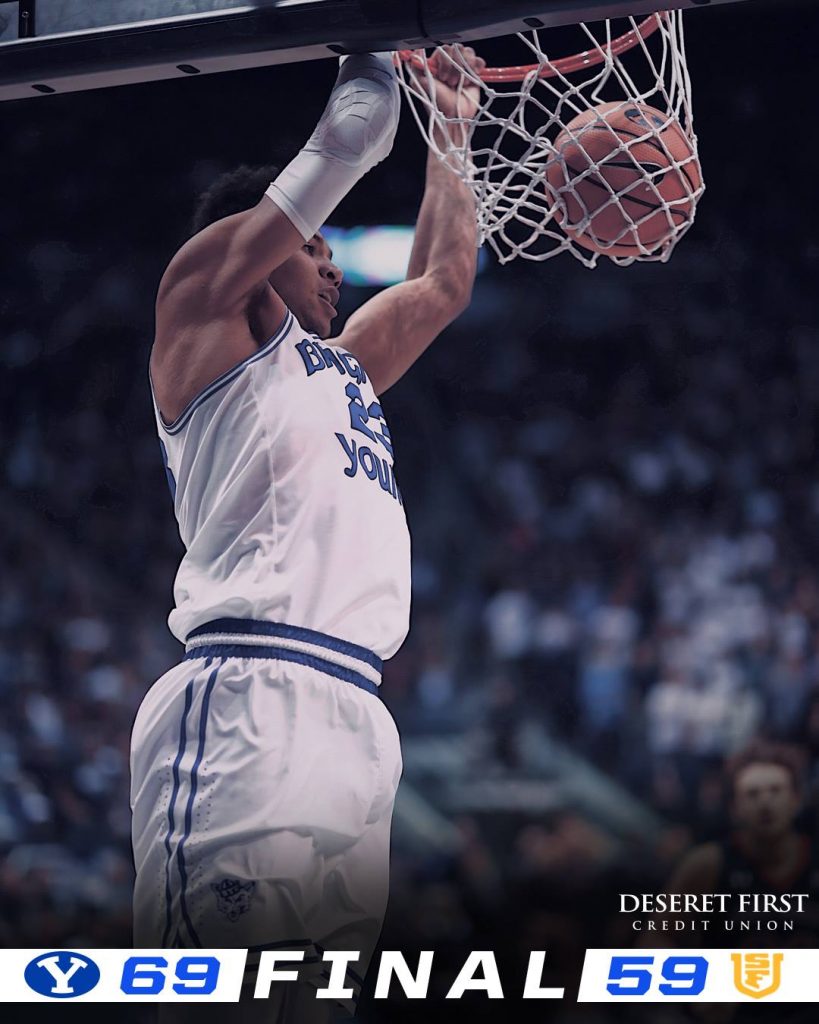 Childs and Bryant added three and five points, respectively, as BYU took a four-point 59-55 lead with six minutes on the clock. The Cougars finished the night on a 16-4 game-closing run in the final eight minutes to earn the 69-59 win.

To start the game, BYU took an early six-point lead, 11-5, powered by six points from Worthington on two layups and a perfect trip to the charity stripe. The Cougars then went on a 7-0 run to take a 13-point lead, 23-10, with 9:06 on the clock. Zac Seljaas made a layup, Bryant made two free throws and TJ Haws hit a 3-pointer to contribute to the run.

San Francisco responded with a 13-1 run of its own, cutting the lead down to one, 24-23, with with 4:40 left in the half. A solid dunk from Childs on an assist from Haws with 3:38 on the clock built momentum as BYU extended its lead. Three free throws from Payton Dastrup and Bryant, along with two late layups from Hardnett, gave BYU a seven-point 33-26 lead heading into halftime.

The Cougars continue their road trip at Pacific on Saturday at 7 p.m. PST. It will be televised on BYUtv and broadcast on BYU Radio (Sirius XM 143), the BYU Sports Network and KSL (1160 AM and 102.7 FM).

Jahshire Hardnett tied his career high with 11 points on 4 of 4 shooting from the field and 3 of 4 from the free-throw line. It is his third double-figure scoring game of the season.

Elijah Bryant hit a 3-pointer with 13:23 left in the first half, giving him at least one 3-point field goal in every game this season. He hit three 3-pointers, his sixth game this season with three-plus 3-pointers. Bryant scored a game-high 17 points, his 12th double-figure game of the season.

Yoeli Childs totaled 13 points on 6 of 9 shooting. He has scored in double figures in all but one game this season, including 14-straight games.

TEAM NOTES
As a team BYU shot 51.1 percent from the field, its ninth game this season shooting 50.0 percent or better.

The Cougars have now led at halftime for 10-straight games, dating back to the contest at Utah Valley on November 29.

BYU has now won 10-straight overall against the Dons and seven-straight in San Francisco.