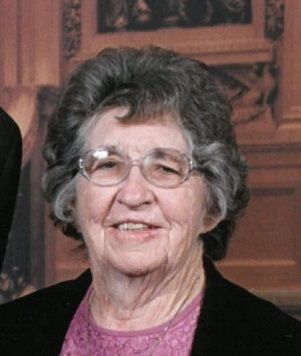 Ruth Jones Lang passed away Nov. 30, 2017, at the age of 93. She was born Feb. 4, 1924, in St. George, Utah, to William Henry and Edna Canfield Jones. They moved to Cedar City, Utah, and later to American Fork, Utah. They lived in a home at the top of a big hill with a barn at the bottom with a few milk cows and a big strawberry field and raspberry patch. The whole neighborhood enjoyed sledding down Jones Hill every winter.

Ruth attended American Fork Elementary School with her friends, Bernice Chadburn Liebhardt, Florence Dixon and Florence White. Ruth decided she wanted to become a nurse and worked for the American Fork Hospital as a nurse’s aide. Ruth graduated from American Fork High School in 1942 and attended the University of Utah for one semester. She decided to get a job in California. She rode the bus down to St. George to spend the night at her cousin Golda Carter’s, before continuing on down. However, she met handsome-just-home-from-the-Army Dee Stevens Lang and never did finish that bus ride.

Ruth and Dee were married Nov. 29, 1944, in the Salt Lake Temple of The Church of Jesus Christ of Latter-day Saints. Six weeks later, Dee left for the New England States Mission. Ruth lived with his parents, Parley and Mira Snow Lang and worked at J.C. Penney six days a week. Ruth was able to join Dee for the last six months of his mission. They bought an old car, a ’34 Chevy as they served together in Vermont. When their mission was complete, they drove home, stopping in New York, Canada and Niagara Falls and joked about finally getting a honeymoon.

On returning home, Dee attended Dixie College in St. George. They were thrilled to welcome Linda, born on Ruth’s birthday in 1948. Nicholas Dee was born in 1950. They moved to Provo, Utah, where Dee continued his education at Brigham Young University. They moved to Lund, Nevada, where Dee taught fifth grade for one year and then to Richfield for a year. They relocated to Las Vegas, Nevada, where Dee worked as a clerk in the post office in North Las Vegas and were happy to be near Dee’s sister’s family, Bernell and Emily Batson.

Meanwhile, Richard gladly joined the family in 1954. Dee and Ruth were frugal with their money and loved to go on camping trips, taking a tent and putting it up on the side of the road. They vacationed in Disneyland the first year it opened, 1955. They went to Yellowstone, Death Valley and visited family in Utah. They loved their family reunions — the Lang Reunion up Parowan Canyon, the Snow Reunion in Pine Valley and the Jones Reunion the Saturday before Easter in St. George.

Ruth suffered a brain aneurysm in 1958 and had multiple brain surgeries. The neurosurgeon actually told Dee that every patient he had operated on previously was either paralyzed or dead but there was no other recourse. However, Ruth had received a priesthood blessing which told her she would live to see her children grown. She not only survived but came home and had another baby boy. The doctors had insisted she abort but Kevin Jay Lang is that miracle baby.

Ruth kept busy raising her children, serving in the church, singing alto in the ward choir, teaching Primary and had a day care in her home. She loved being surrounded by children. Jeri Ann still calls her “Mama Ruth.” Eight of the children she tended later joined the church. Ruth loved her grandchildren as they came along.

Ruth and Dee served other missions — a family history one to New Orleans, Louisiana; a St. George Temple and another family history mission in Las Vegas. In 1992, Dee and Ruth built a home in Santa Clara, Utah. Ruth loved her grandchildren’s comings and goings, their mission farewells and welcome homes, their weddings and the births of their grandchildren. She became “Grandma Great,” and loved reading stories to them. Ruth and Dee went to the temple every Wednesday and also enjoyed their Dixie College ICL classes and field trips. It seemed too good to be true.

Alas, Dee’s health deteriorated and he passed away on June 6, 2010. Ruth had been Dee’s ears and he had been her memory. Without him, her short-term memory continued to unravel.

Special thanks to those who made Ruth’s last years brighter: Cierra Jeppson and her dad, Dave, who installed a special mailbox for Ruth; Beverly Brimley who sent her a cute card nearly every week and Cat Poulson who wrote her long, newsy letters. Also, Delaine Anderson, a volunteer who became a trusted friend. Ruth also enjoyed visits from Katie Beacham. Thanks to Dr. Kent McDonald, Suntree Hospice and the staff and residents of the Mesa Palms Beehive Home.

Arrangements have been entrusted to the care of Serenity Funeral Home.