LOGAN — Despite a boisterous and sometimes abusive crowd at Utah State, BYU hammered the Aggies 75-66 at the Dee Glen Smith Spectrum on Saturday night. Four Cougars finished in double figures.

Yoeli Childs and McKay Cannon led BYU with 17 points apiece, while Elijah Bryant had 15 points and TJ Haws chipped in 10. Childs recorded a game-high eight rebounds in the victory.

After nearly four minutes without a field goal, Jahshire Hardnett took the lid off the basket as he drove and scored with 5:01 on the clock, bringing the Cougars back within four, 15-11.

USU increased its lead to six, 20-14, before BYU answered, outscoring Utah State 10-3. A three-point play by Childs gave the Cougars their first lead of the game, 24-23, with 1:18 remaining in the half. 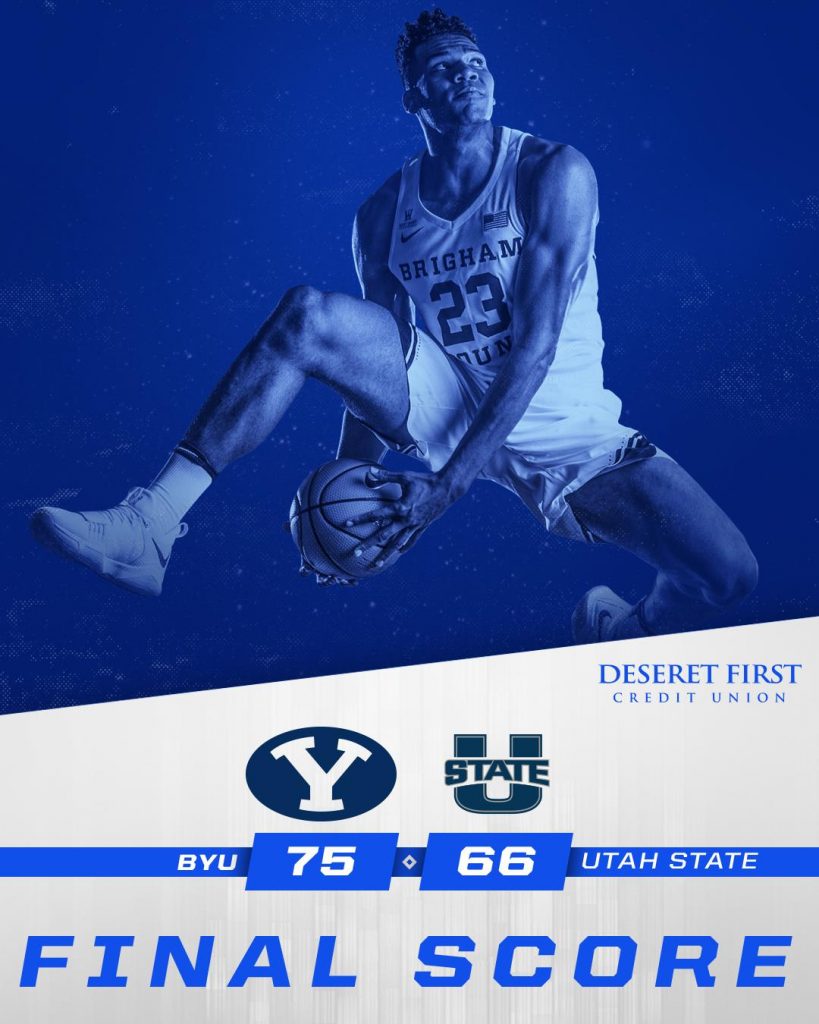 After an Aggie free throw, BYU closed with a 28-24 lead after a Haws floater and a pair of free throws from Cannon just before the end of the half. The Cougars went 7 of 9 from the field to end the half.

Childs led the Cougars with nine points and four rebounds while Cannon and Nixon had six and five points, respectively, off the bench. McEwen scored 12 in the first half to lead Utah State. BYU held the Aggies to 27.6 percent shooting from the field.

Bryant opened the second half with a 3-pointer to extend the Cougar lead to seven, 31-24. The Aggies responded with a 9-0 run to retake the lead, 33-31. Bryant countered, burying his second trey of the game with 15:54 on the clock to give BYU the slight advantage, 34-33.

BYU and USU traded baskets midway through the second half with the Aggies taking the 41-39 lead with 12:58 to go. Childs responded on the next Cougar possession with a monster dunk to tie the game at 41-all.

With 8:05 on the clock, the Cougars secured a five-point lead, 50-45, as Bryant completed a three-point play. After a layup by Diogo Brito to bring the Aggies within three, Haws knocked down a 3 and Childs made a layup to give BYU the six-point edge, 55-49.

BYU basketball will return to the Marriott Center to host Illinois State on Wednesday, Dec. 6. The game will begin at 7 p.m. MST and will be televised on BYUtv and broadcast on BYU Radio – Sirius XM 143. Links to live stats are also available on the BYU men’s basketball schedule page.

Childs owns the inside as BYU thrashes Utah Valley