CEDAR CITY — What started in 2012 as two women wanting to help a friend has since grown to an annual event benefiting community members with cancer and their families. The 5th annual “Lori’s Pink Christmas” will take place Wednesday at the Cedar High School auditorium and feature a talent show, silent auction, Christmas tree auction, bake sale and visit from Santa.

“We had a friend, Lori (Blackner Myers), who was diagnosed with stage 4 breast cancer,” she said. “We started it for her. We didn’t intend for it to be a long-term thing. We just did it for her and had a huge success, so we continued it on in her name.”

Coates agreed, adding that it just seemed like the right thing to do at the time.

“When we heard about Lori, Rachel and I were visiting about it in the lobby of my dance studio,” she said. “At the time, three of (Lori’s) nieces danced for me. And so I was trying to think, ‘How could I do something at my own Christmas recital?’”

The possibility of passing a jar came up, Coates said, and as the two kept talking, Torres brought up the idea of a silent auction. Things took off from there.

“And I said, ‘You know, it might be better to have a variety of groups come in,’” she said, “because when their kids are involved, people will pay to come and see them. I don’t think when we were planning it for Lori that we thought it was going to be something we would do every year. We just really wanted to help our friend.”

The first year, the event was called “Let’s Paint Christmas Pink,” Torres said, but after the success of the event, they approached Myers about continuing.

“Lori wasn’t expected to do well at stage 4, but the next year when she was still here, we asked her if we could continue the event in her honor,” she said. “So then we named it ‘Lori’s Pink Christmas.’”

The second year, Torres and Coates got together with the Blackner and Myers families to talk about people in the community who had a need, Torres said. They picked Randy Humphries, who was diagnosed with brain cancer in August 2012.

“We all grew up in the same neighborhood as Randy’s wife,” Torres said. “So we had known them, and that was one of the deciding factors, and he was a dad of three kids.”

Since then, recipients of the proceeds from Pink Christmas have been chosen based on nominations handled through the Facebook page of Myers, which has become the official page of the event since her passing in 2015.

This year’s beneficiaries are Patrick Bellamy and Amy Matheson.

Bellamy was diagnosed with stage 4 rectal adenocarcinoma with metastases to the lungs in March 2016, according to the Lori’s Pink Christmas website. The cancer went into remission but has since returned. Bellamy is studying elementary education at Southern Utah University and is married with two children. The things he said he enjoys most are spending time with his family and neighbors.

Matheson is also dealing with cancer for a second time, having been diagnosed with stage 4 ductal carsenoma breast cancer in September, according to the website. Matheson lives in Beaver and works at the Beaver Housing Authority as well as being a consultant with Rodan Fields. She is married with four children and enjoys reading, camping and hunting, but she said that most of all, she enjoys doing the most is supporting and watching her kids in all of their activities.

Over the past four years, Lori’s Pink Christmas has made nearly $75,000, of which all proceeds go to the recipients. This event is fully funded by the donations of local businesses and community members.

“We want this to be a positive community event that continues to teach people old and young that the true meaning of Christmas is more than just boxes under a tree,” Torres said.

Coates handles the “Talent Showdown” portion of the event and said that while there is a competitive aspect to the show to an extent, especially with many performers coming from different dance studios, everyone is there for the same cause.

“The whole goal is to raise funds for these families who are in desperate need of it,” she said. “We’re all there for the same goal, just to enjoy a night together with a common way to serve the community.”

In fact, as a way to raise additional funds, talent show participants will have jars set up where attendees can put additional donations based on their favorite performance or group.

“We tell people, ‘This is one of the few places where you can buy votes,’” Coates said and laughed. “And we encourage them, we want them to buy votes. … We’ve never had any complaints.”

There’s not even an award for the winner, Coates said, but that doesn’t mean they don’t walk away with something a little more intangible.

“Once people have participated, they come back every year because it’s such a neat thing to be a part of,” she said.

More than anything, Coates said, she is incredibly appreciative of the participants taking time out of their schedules, especially during this time of year.

“Christmas is crazy for a band teacher or a choir director or a studio director.”

But Coates said when she has put out the call to help, they have stepped up. One example from a previous year still sticks out in her mind:

One of the (studio) directors, it was kind of short notice for her parents one year when she was telling them how much it cost to get in the show. She said, ‘I believe in this event so much that if you can’t afford to come, I will pay your admission into the event.’

Coates got emotional when she said the willingness of performers and instructors to fit it into an already busy schedule was the part that she loves most about Pink Christmas.

While all of the slots are already filled for this year, Coates said if someone is interested in more information on next year’s event, they can email her at joy.coates@ironmail.org.

For those unable to attend but still wanting to help, they can donate at State Bank of Southern Utah under the account name “Lori’s Pink Christmas” or call Torres at 435-463-2665. 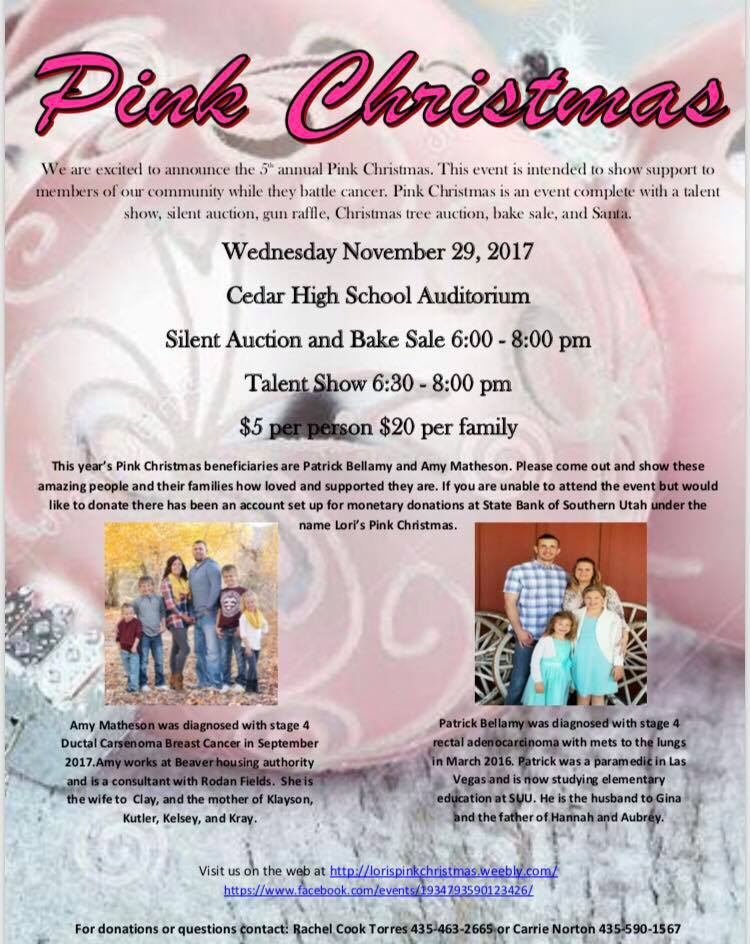